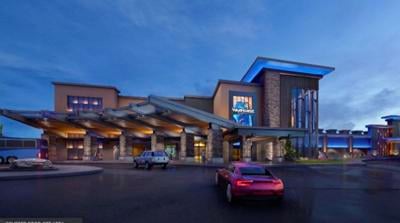 If all goes as planned, gamblers could hit the jackpot as soon as next spring in Omaha.

WarHorse Gaming — a subsidiary of Ho-Chunk Inc., the economic development arm of the Winnebago Tribe of Nebraska — intends to break ground this summer on what it calls a “dynamic casino, racing and entertainment complex” at the current site of Horsemen’s Park near 63rd and Q Streets.

The plan involves significant renovations to the existing complex as well as nearly 67,000 square feet in new construction and expansion, according to documents submitted to the City of Omaha last year.

The expansive facility will hold gambling tables and more than 1,200 gaming machines, as well as live and simulcast racing. There are also plans for a live entertainment stage, multiple bars, a food hall and a coffee shop.

Drew Niehaus, a representative for WarHorse, said he expects the groundbreaking ceremony at the Omaha location to take place sometime in mid- to late summer. When construction commences in the existing building, simulcasting will be moved to temporary trailers on the infield to continue operations.

Once renovations are complete, a transitional facility will be set up with roughly 800 gambling machines. Niehaus said the temporary casino should be ready for public use about 10 months after the groundbreaking.

Voters approved the expansion of casino gambling operations at licensed racetracks through a trio of ballot initiatives in 2020. But more than 18 months later, construction and renovations have yet to begin at any of the proposed locations.

According to a tax-increment financing application submitted to the city last year, WarHorse had hoped to break ground on the Omaha facility by summer 2021 and wrap up construction by September of this year. At the time, the project was expected to cost $220 million. WarHorse was awarded $17.5 million in TIF to fund the redevelopment at Horsemen’s Park, including more than $6 million allocated for offsite public improvements.

The delay in Omaha and across Nebraska is largely due to the mountain of regulatory work facing the state.

“The state of Nebraska is launching an entirely new industry,” Niehaus said. “Obviously there will be amendments, but they want to get it right from the get-go.”

The Nebraska Racing and Gaming Commission formally approved a 67-page set of rules and regulations for casino gambling in December. Gov. Pete Ricketts approved the regulations earlier this month, marking one of the most significant steps forward since the 2020 election.

Before construction can begin, the gaming commission must approve an application fee structure for casino operators. The commission was scheduled to vote on the fees at its May 6 meeting, but the agenda item was laid over.

Lynne McNally, executive vice president of the Nebraska Horsemen’s Benevolent and Protective Association, told the Lincoln Journal Star earlier this month that the fees are expected to be approved at the June 2 meeting.

If fees are approved at that meeting, potential casino operators could start submitting applications the very next day. It will take a month or two for those applications to be processed, and the commission will then have to approve each application during its monthly meeting.

“It’s been a long process to get here, but we fully support the state taking its time,” Niehaus said.

This report includes material from the Lincoln Journal Star.

Companies interested in opening casinos at Nebraska horseracing tracks can now apply for a license, which will cost $5 million over five years.

Omaha has approved upward of $105 million in tax-increment financing this year, already exceeding the total in all of 2021.

WarHorse Gaming’s long-planned casino broke ground Wednesday. It will be built on the site of Horsemen’s Park near 63rd and Q Streets.

Why walruses are fed restaurant-quality seafood at zoo in Washington