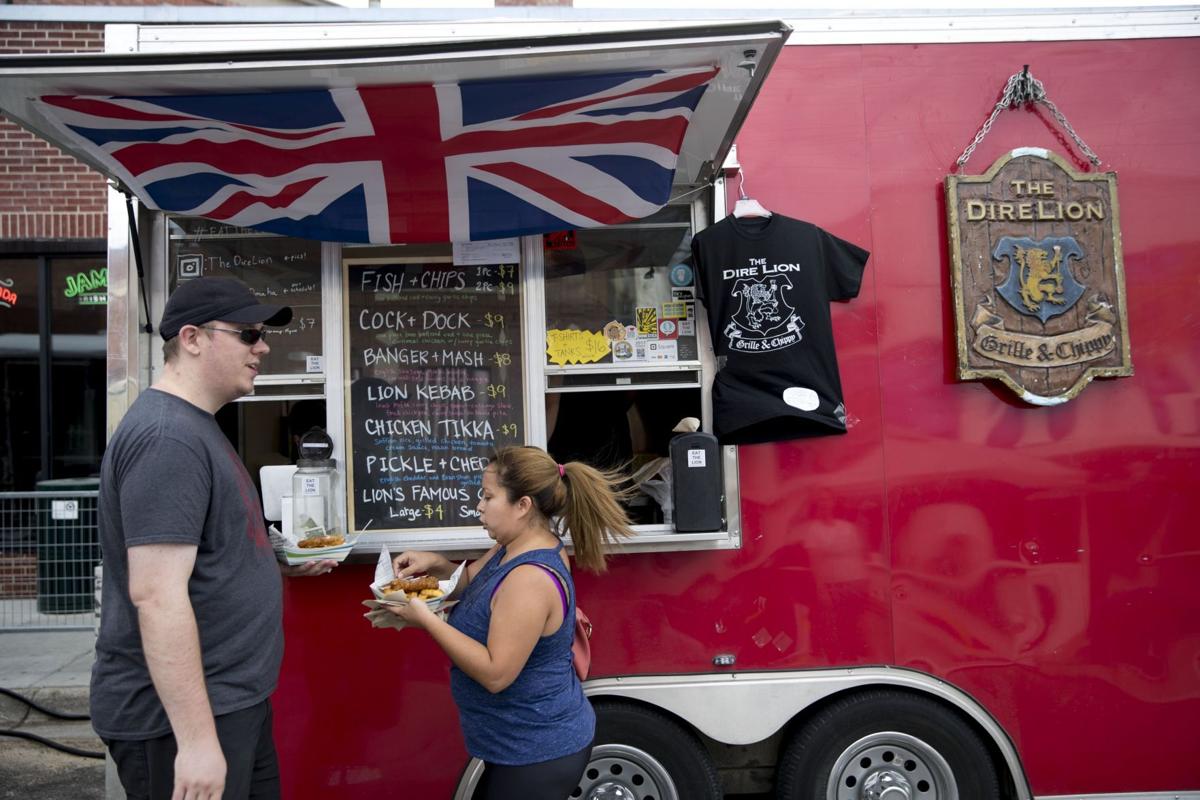 Brad Giboo and Lynette Hartin-Kovy grab food at the Dire Lion food truck several years ago. The truck now is one of three core trucks at Trucks and Taps, a new food truck endeavor at 108th and Q Streets.

The owner of the Big Green Q food truck, Kevin Wyatt, is a co-owner of Trucks and Taps, a new food truck patio at 108th and Q Streets. 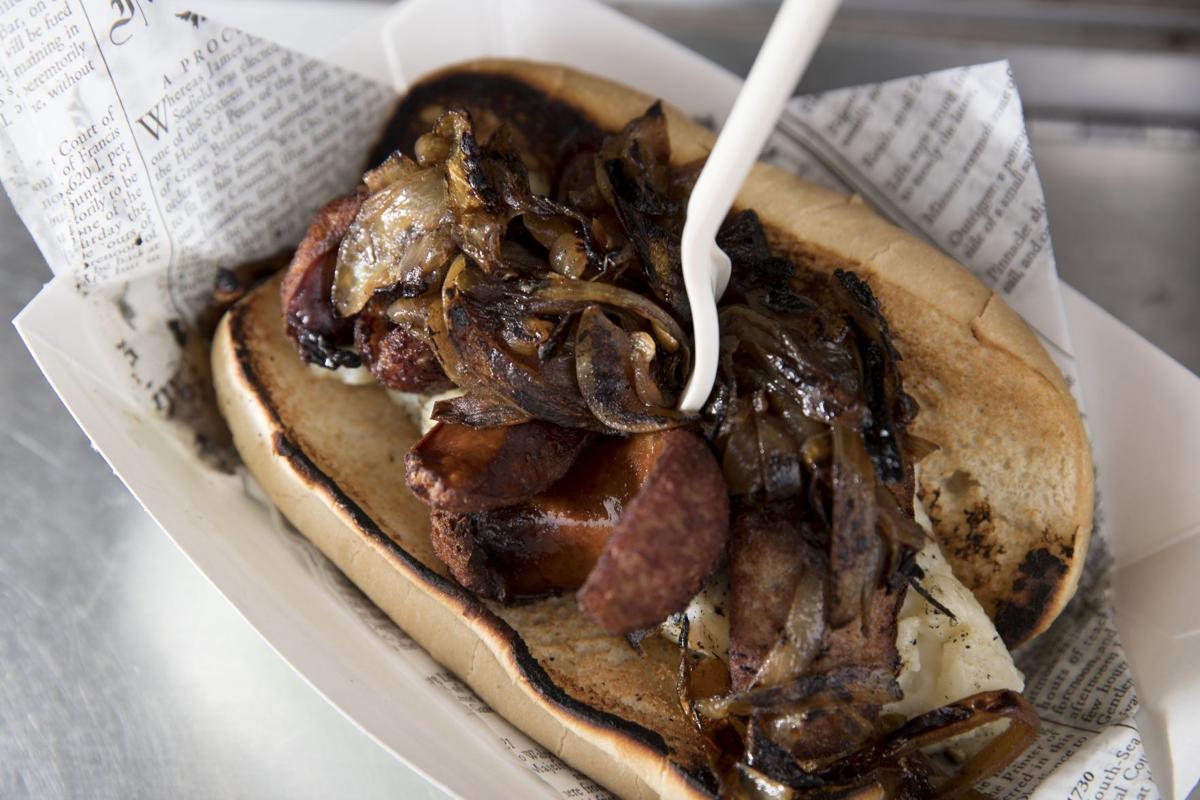 Bangers and mash at the Dire Lion food truck, one of the participants at the new Trucks and Taps in Omaha. 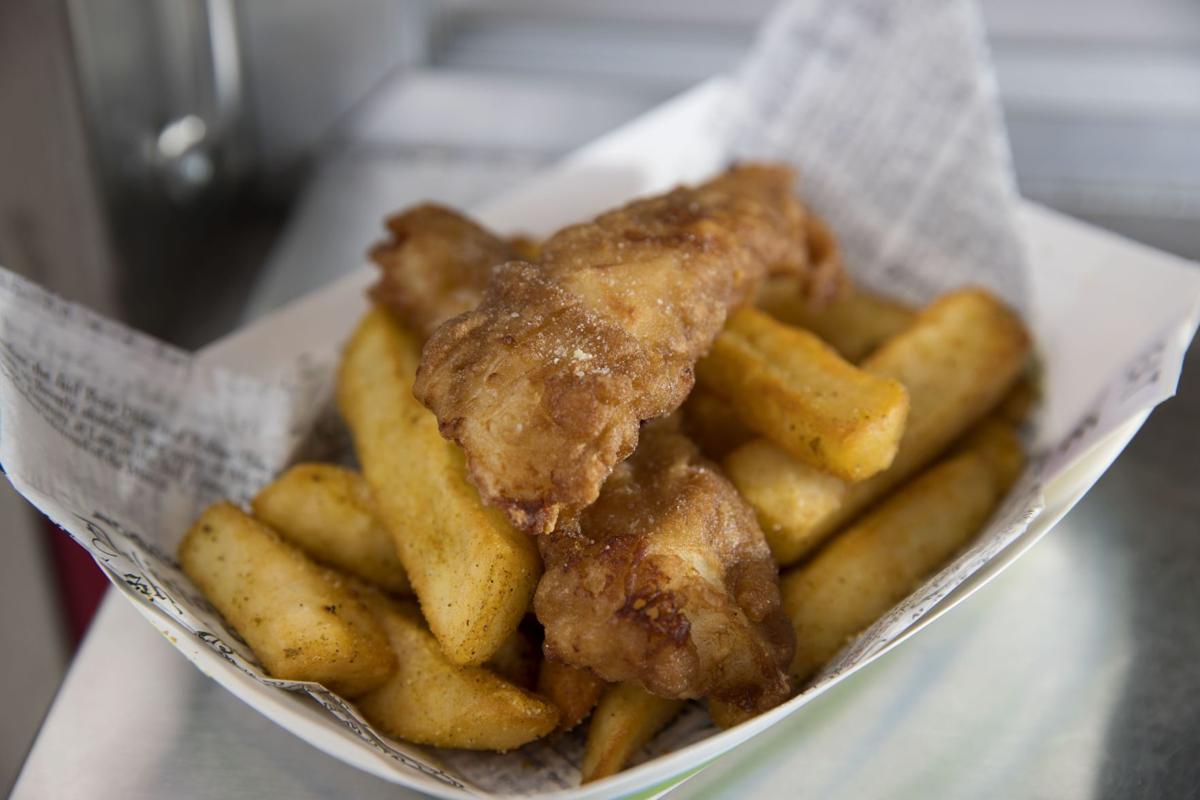 Dire Lion, one of the food trucks at the new Trucks and Taps near 108th and Q Streets, serves British cuisine such as fish and chips.

Trucks and Taps, which opened in June at a former Sonic Drive-In, is a new concept, say owners Kevin Wyatt and Isaiah Renner.

Three food trucks call it home: Renner’s Dire Lion, Wyatt’s Big Green Q and Wonton Jon’s, owned by Jon Stastny, who rents his space. Other trucks will rotate in and out.

It’s not like food truck parks in other cities, which typically are on vacant lots with trucks on blocks.

The three trucks share a commissary kitchen onsite in the former Sonic food preparation area, where chefs cook from scratch. The building also has an office at the front, and the bar — with a walk-up window — is on the side.

“I think we’re a little different from what anybody else is doing,” Wyatt said.

They expanded the Sonic patio for socially distant outdoor seating, and the property has about 25 parking spaces for customers.

Dire Lion offers British dishes such as fish and chips and bangers and mash; Big Green Q has barbecue and sides; and Wonton Jon’s serves fried wonton cups with unusual fillings such as mushroom kimchi and ranch buffalo chicken.

“We wanted a place where people could go to different food trucks and have a beer or margarita,” Wyatt said.

They’re offering several perks for food truck operators, including electric hookups and reusable stainless steels trays with paper mats for customers who eat on the patio.

Not having to use generators saves the truck owners money and keeps the site quiet, and the trays cut garbage by 75% while reducing the cost of disposable containers, he said.

A weekly schedule of available trucks at Trucks and Taps will be on social media starting next week. They plan to be open from 11 a.m. to 8 p.m. Monday through Thursday, 11 a.m. to 9 p.m. Friday and Saturday and 10 a.m. to 2 p.m. on Sunday.

They hope to operate as many months as possible, and transition to takeout and delivery during the winter. They won’t use a third-party delivery services so they can offer workers year-round employment.

So far, Trucks and Taps has been popular with outdoor diners. About 80% of the people who came last week ate on the patio, even in 95-degree weather.

It also provides a great opportunity for people to safely leave the house, he said.

Last weekend three couples came at separate times with infants up to 6 months old. Each couple said it was their first outing since their babies were born. All said they had been looking for a safe place with fresh air.

“But inevitably,” Wyatt said, “they all said it was a place they could get an adult beverage.”

A summer of s'mores: 9 new s'mores recipes you need to try this summer

Good things are made to be shared and remembered, and with s'mores, more is always better. Try these recipes (includine one for homemade graham crackers) this summer!

Leo's Diner in Benson closed due to coronavirus and won't reopen; restaurant is for sale

A Facebook post said Leo's wouldn't resume serving in August as planned and cited increasing coronavirus cases as one reason.

Take it from a connoisseur: Hot dogs deserve their day

We are offering some fun facts and suggestions in honor of National Hot Dog Day including some of Omaha's top dawgs.

'After the Flood' is the Omaha Reads book for 2020

The symphony Christmas show is a casualty of the coronavirus-prompted move, but other 100th season events will go on, including a joint concert between the two groups.

The Omaha Magical Society needed a home for its library, amassed by members over several decades. UNO gladly obliged. Today, people around the world have access to it.

Some of the food and drink at Lux has the same Cajun and Creole theme as Acadian Grille, with dishes such as crab cakes and boudin balls, and cocktails such as the Sazarac and the Hurricane.

Brad Giboo and Lynette Hartin-Kovy grab food at the Dire Lion food truck several years ago. The truck now is one of three core trucks at Trucks and Taps, a new food truck endeavor at 108th and Q Streets.

The owner of the Big Green Q food truck, Kevin Wyatt, is a co-owner of Trucks and Taps, a new food truck patio at 108th and Q Streets.

Bangers and mash at the Dire Lion food truck, one of the participants at the new Trucks and Taps in Omaha.

Dire Lion, one of the food trucks at the new Trucks and Taps near 108th and Q Streets, serves British cuisine such as fish and chips.