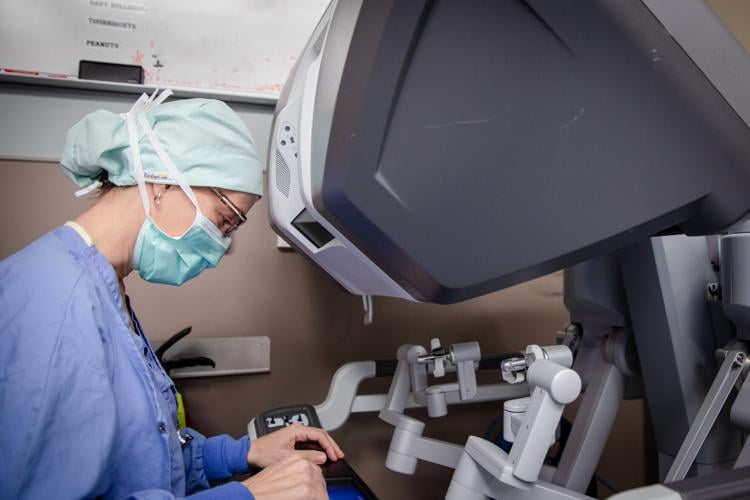 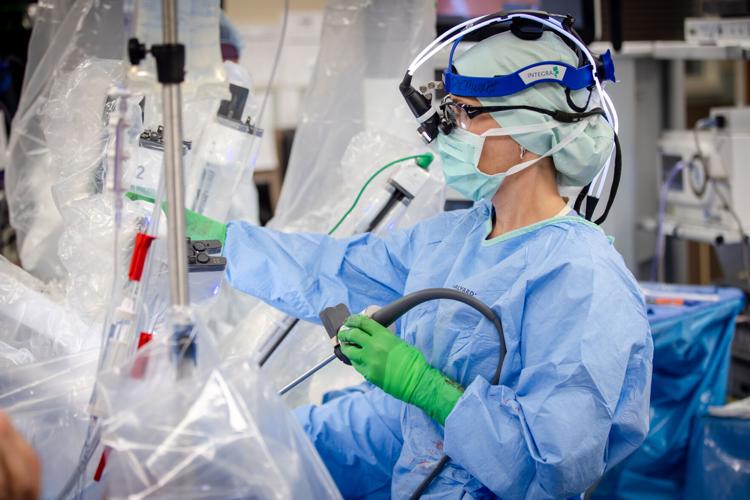 Dr. HelenMari Merritt-Genore works with the robotic arms of the Da Vinci Surgical System during a mitral valve surgery. 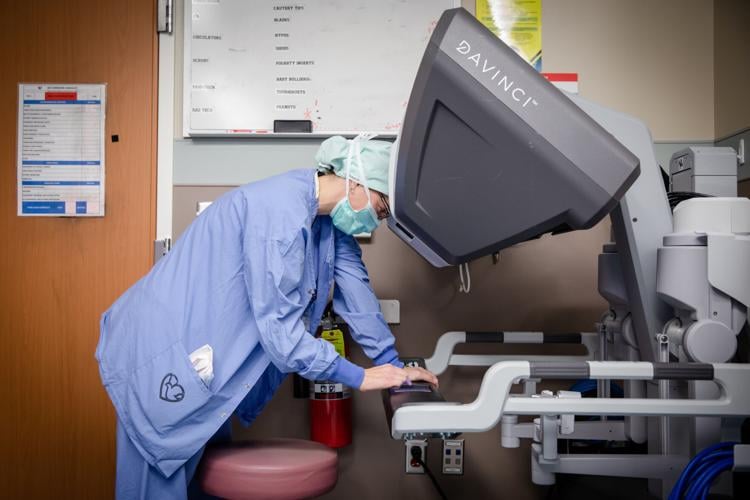 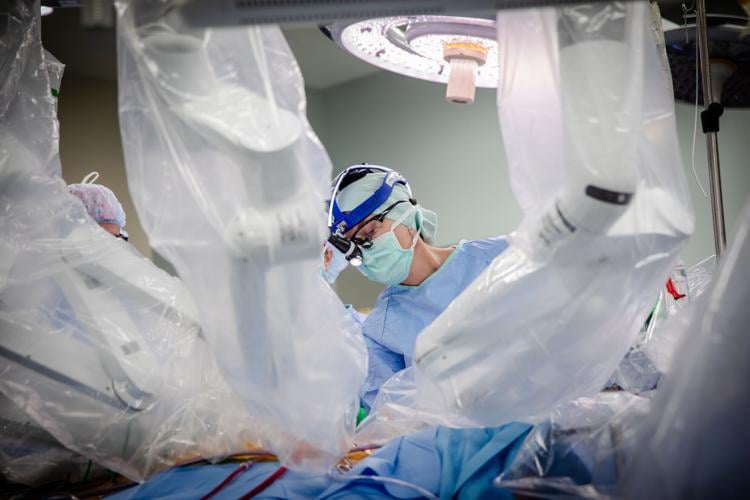 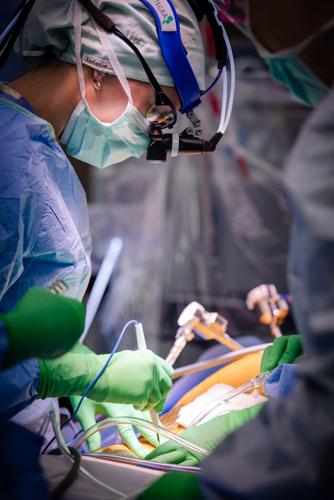 Dr. HelenMari Merritt-Genore uses a robot to assist in heart surgery to repair a mitral valve at Methodist Hospital. 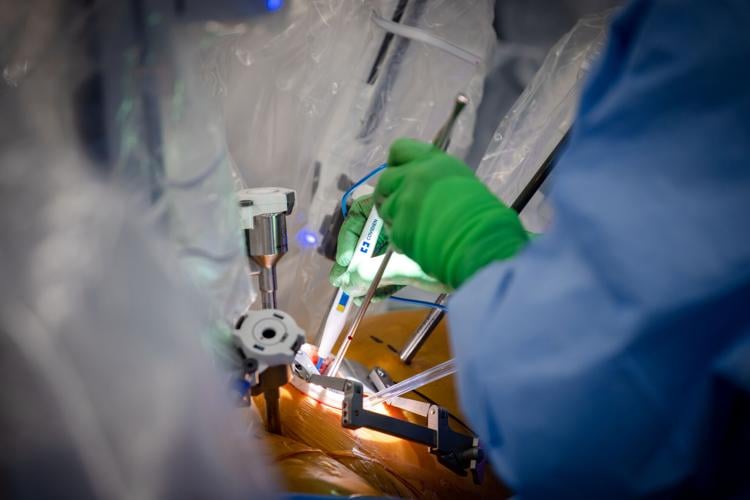 Omahan Mark Corrao noticed during the pandemic that he was easily fatigued and couldn’t walk up a flight of stairs without pausing to catch his breath.

When he walked up a hill, his heart felt like it was pounding out of his chest.

“I felt probably twice my age, and it just didn’t feel good,” the 52-year-old said. “I knew something was wrong.”

He tested negative for COVID-19, but his doctor found a heart murmur during a physical. His mitral valve, one of four valves in the heart that keep blood flowing in the right direction, was leaking. That allowed blood to flow from the lower left chamber of his heart back into the upper left one, reducing the amount of oxygenated blood that flowed to the rest of the body.

Left unchecked, the condition can lead to heart failure.

Most mitral valve repairs require cutting through the sternum and opening the chest, followed by a month or more of recovery with no driving or lifting more than a gallon of milk.

But Dr. HelenMari Merritt-Genore, a cardiothoracic surgeon with Methodist Physicians Clinic, offered another option: a robot-assisted surgery that, like a minimally invasive procedure, is done by inserting instruments through small holes in the chest.

The robot’s camera allows surgeons to see better inside the chest. The device’s instruments, with their range of motion, allow for more complex and delicate work in the chest cavity. “The dexterity of the robot is really crazy,” Merritt-Genore said.

Corrao, who drives frequently as part of his work for an online internet auction for car dealers, already had spent months, even years, recovering from a 2018 surgery to remove a benign tumor inside his skull. He wasn’t looking for months more of recovery, and he didn’t want to miss his 12-year-old son’s hockey games.

Corrao opted for the robot-assisted surgery. He underwent the first robot-assisted mitral valve repair by Merritt-Genore and Methodist Health System in early November.

While surgical robots have become widely used in other parts of the body, from the abdomen to the brain, Merritt-Genore estimated that fewer than 5% of cardiac surgeries currently are performed with a robot.

The nearest hospitals she’s aware of that are routinely performing robot-assisted heart surgeries are the University of Kansas Medical Center in Kansas City and the Mayo Clinic in Rochester, Minnesota. A surgeon at Lincoln’s Bryan Health previously had performed robot-assisted mitral valve procedures but no longer is with that health system.

“It’s just one other option we can offer some patients, with the majority of patients still needing to have an open incision for various reasons,” Merritt-Genore said. “It will still be the mainstay of what you do.”

Corrao went home four days after the procedure and began driving a couple weeks later. He’s feeling much better and is completing cardiac rehabilitation. “I’m probably 75-80% back,” he said.

Merritt-Genore said she has long been interested in doing robot-assisted cardiac procedures as part of an approach that involves various means of enhancing patients’ recovery after surgery, from using smaller incisions using techniques to reduce the need for opioid painkillers.

She had been doing minimally invasive heart surgeries using various techniques since about 2016. About a year ago, she and two other Methodist cardiothoracic surgeons began doing robotic thoracic surgeries involving the lung, esophagus and chest wall. Drs. Karin Trujillo and John Batter have specialized in those surgeries, while Merritt-Genore has focused on robotic heart procedures.

It took some time to build a team to do the procedures, she said. Ultimately, the surgeons pick the best approach for the patient. Not all are candidates for either minimally invasive or robotic procedures. For patients where surgery is too risky, surgeons repair the valve with a clip that is threaded up through a vein in the leg. But a surgical approach offers a more durable repair.

Merritt-Genore said she is asked about the robotic option frequently. The team brought in proctors, surgeons from other hospitals who already routinely perform the procedure, to consult on the first three robot-assisted heart surgeries.

Merritt-Genore said she has chosen to follow the proctors’ techniques for those procedures. “It gives some extra tricks in our bag to learn different things,” she said. “If I run into a challenging situation in the future, maybe I can say, ‘You know, maybe I’m going to pull out this trick.’”

During the procedure, the team places the robot arms through ports in the patient’s chest and side, then attaches them to what’s known as a patient cart. She sits at a console with foot pedals and finger controls that’s parked in a corner away from the operating table. From there, she operates the robot as it cuts and stitches. She also controls its 3D camera.

During a second robot-assisted mitral valve repair in mid-November, Merritt-Genore removed extra tissue from the patient’s valve and reinforced it with a flexible ring. She also closed a hole in the patient’s heart and — because he had an abnormal rhythm called atrial fibrillation — stitched off a small appendage on the left atrium where blood can pool and form clots. Closing both reduced the patient’s risk of stroke in two separate ways.

Patients generally leave the hospital a day earlier with a robotic procedure than with an open surgery, she said. The cost to the patient for both types of procedures is the same. Where the difference lies is in the recovery time.

“Where the robot really shines is not just how many days the patient is in the hospital but really what happens in that first 30 days,” she said.

Merritt-Genore said the team hopes to complete up to two dozen mitral valve procedures in its first year. Some surgeons in other hospitals already are doing other types of cardiac surgeries with the devices, including bypass surgery. She said she and her team want to make sure they master the mitral valve repair before they think about other procedures.

“There certainly are experts in the field that believe this has a lot of application to our field,” she said.

After Buffalo Bills safety Damar Hamlin collapsed after making a tackle during a Monday night game, football fans were left wondering what cou…

Dr. HelenMari Merritt-Genore works with the robotic arms of the Da Vinci Surgical System during a mitral valve surgery.

Dr. HelenMari Merritt-Genore uses a robot to assist in heart surgery to repair a mitral valve at Methodist Hospital. 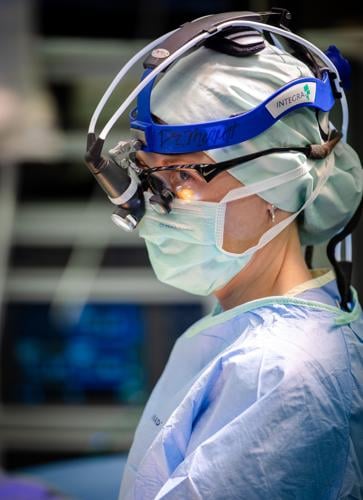 Dr. HelenMari Merritt-Genore uses a robot to assist in heart surgery to repair a mitral valve. 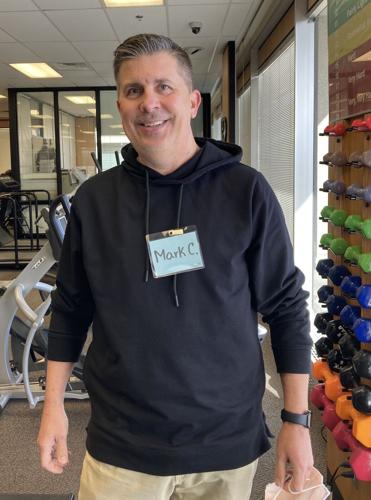 Omahan Mark Corrao is completing cardiac rehabilitation after having a mitral valve in his heart repaired with the help of a surgical robot. 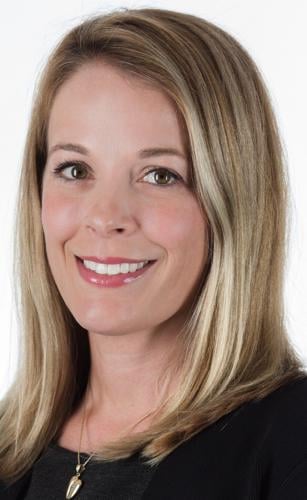