Coming this summer to a street near you: road resurfacing and repair projects, courtesy of the $200 million streets bond issue approved by Omaha voters this week.

Mayor Jean Stothert on Wednesday identified the first round of work tied to the influx of cash the city will receive from the bond issue.

The list represents an estimated $29 million of work and includes 16 projects, which will either resurface or repair multiple streets in every part of the city.

The projects will be advertised for bids throughout May and June and should be completed by the end of the construction season, said Bob Stubbe, the city’s public works director.

“We’re looking at July sometime as having a lot of activity going on,” Stubbe said Wednesday while speaking to local media. 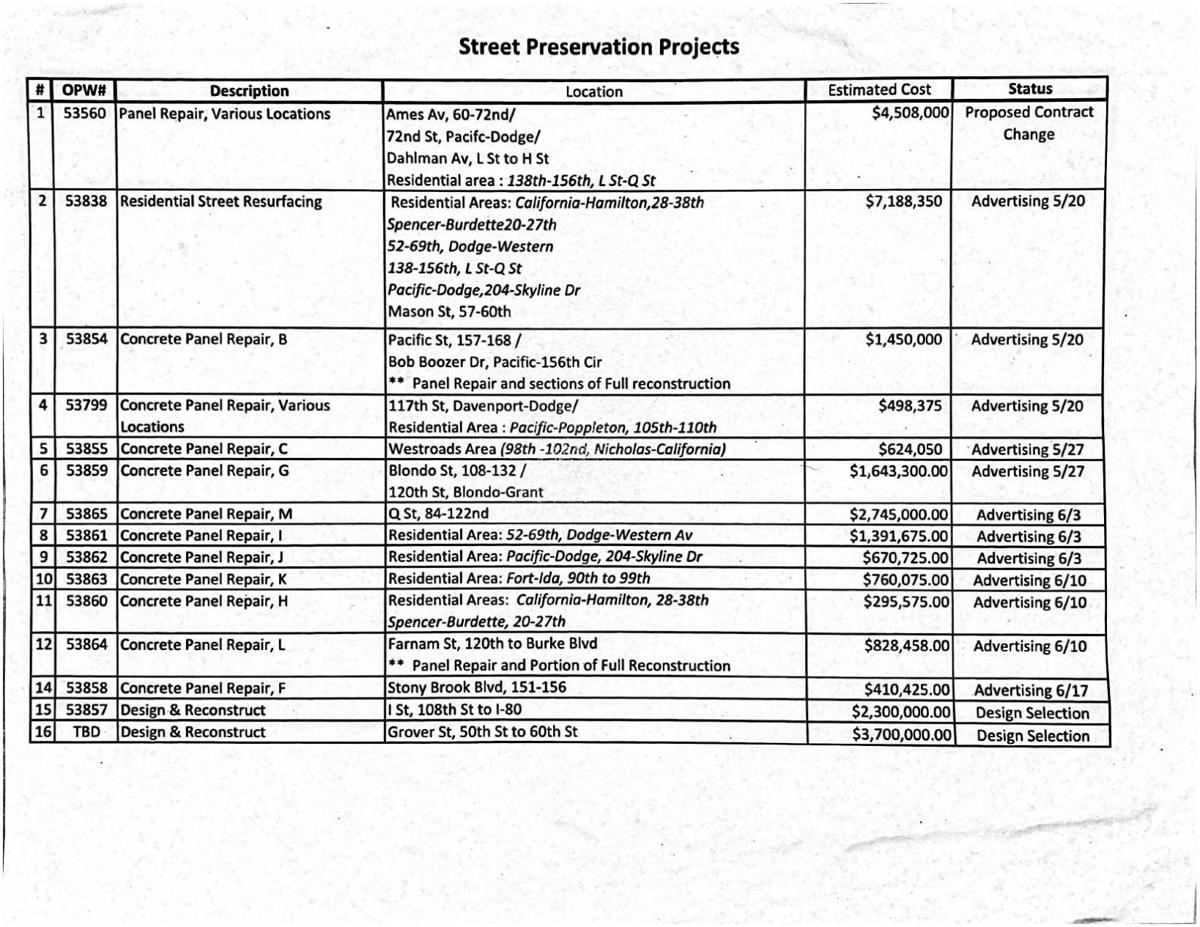 Some of the work will target streets frequently used by drivers: Q from 84th to 122nd Streets; Blondo from 108th to 132nd Streets; Bob Boozer Drive from Pacific Street to 156th Circle; and Ames Avenue from 60th to 72nd Streets.

Residential areas on the list span the city and include Fairacres near Memorial Park, Walnut Grove near 144th and Q Streets and a few neighborhoods northwest of Creighton University.

The projects announced Wednesday are the beginning of what will be a multiyear effort to overhaul city streets. The bond issue effectively will provide the city with $40 million each year over the next five years to conduct additional road work, but because it was just approved, the 2020 efforts won’t hit that number.

Stubbe said the department considers many factors when it chooses projects, including the condition and age of streets and whether a project is close to a school or church. Officials also strive to spread out projects geographically, partly to avoid traffic congestion, but also to equitably serve all citizens.

“We try to spread it out throughout the metro area,” Stubbe said.

One of the first projects on the list, scheduled to be advertised for bids on May 20, will resurface multiple residential streets from far east to far west Omaha. That project, estimated to cost nearly $7.2 million, is the only residential street resurfacing work included on the list. Most of the other work will repair concrete panels.

The projects are in addition to 27 resurfacing projects the city had already planned for this year. Omaha should be spending $75 million a year to resurface its 5,000 lane miles once every 20 years, transportation experts have told the city. But the city has been able to spend only $41 million a year.

Taxpayers will eventually see a bump in their property taxes because of the bond issue, but the increase — somewhere between $26 and $35 for every $100,000 of valuation — most likely won’t show up for a year or two.

Voters this week approved wording that would allow the $35 hike, but Steve Curtiss, the city’s finance director, said that number was chosen to ensure that the city would have enough money to complete the work.

Other funding sources, refinanced bonds and expiring debt all could mean that the actual increase will be lower. Curtiss said the city won’t begin issuing the bonds until late 2021, and the first debt payments won’t be due until the following year.

The city won’t be able to repair every street with the $200 million bond issue, Stothert said. Officials probably will come back to voters with a series of bond issues over the next two decades to repair and maintain Omaha’s roads.

But the property tax increase approved this week should be able to cover those bond issues, she has said.

“I think this is what we have been needing to do for decades,” Stothert said Wednesday. “And now we have finally got it done and can move forward.”

The neighborhoods all are concentrated in far west and northwest parts of the metro area.

The mayor urged parents to keep their children off playground equipment because the city can't keep it disinfected.

'Trying to stay optimistic': A day in the life of Omaha, a city shut down by coronavirus

Moms. Mourners. Friends. Business owners. Healthcare workers. The homeless. Professional athletes. They're all Omahans, and they're all affected by coronavirus. This is their story: A day in the life of a city shut down by the pandemic.

A look at how the coronavirus outbreak developed across the world and how it has unfolded in Omaha.

A total of 20 inmates within the state's prison system have been tested so far, with two testing positive, 12 testing negative and six results still pending.

Summer camps, neighborhood grants canceled as Stothert warns of layoffs and other cuts

The mayor said that she does not want to lay off employees or cut community services but may need to do so.

Whether swimming pools, libraries and community centers will reopen in 2020 has not been decided.

The leader of the property tax relief push, State Sen. Lou Ann Linehan, said nothing else will be accomplished in the remaining days of the legislative session unless a bill passes.

In her eighth State of the City address, Stothert lamented the toll the pandemic has taken: the lives lost, the routines disrupted. But there's reason for optimism, she said.