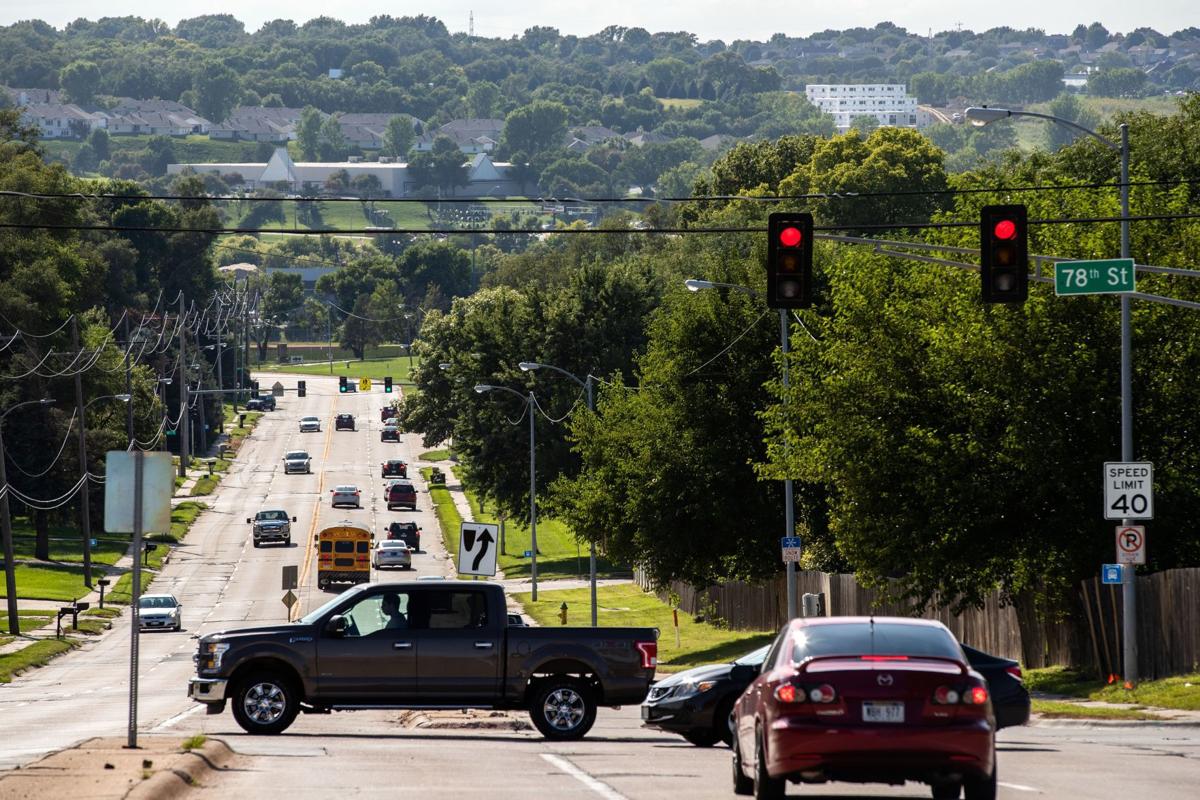 Crown Point Avenue in northwest Omaha between will be rebuilt in line with Omaha’s “complete streets” policy. Two through lanes for traffic will be removed, roundabouts will be added and a new multi-use trail will be built. 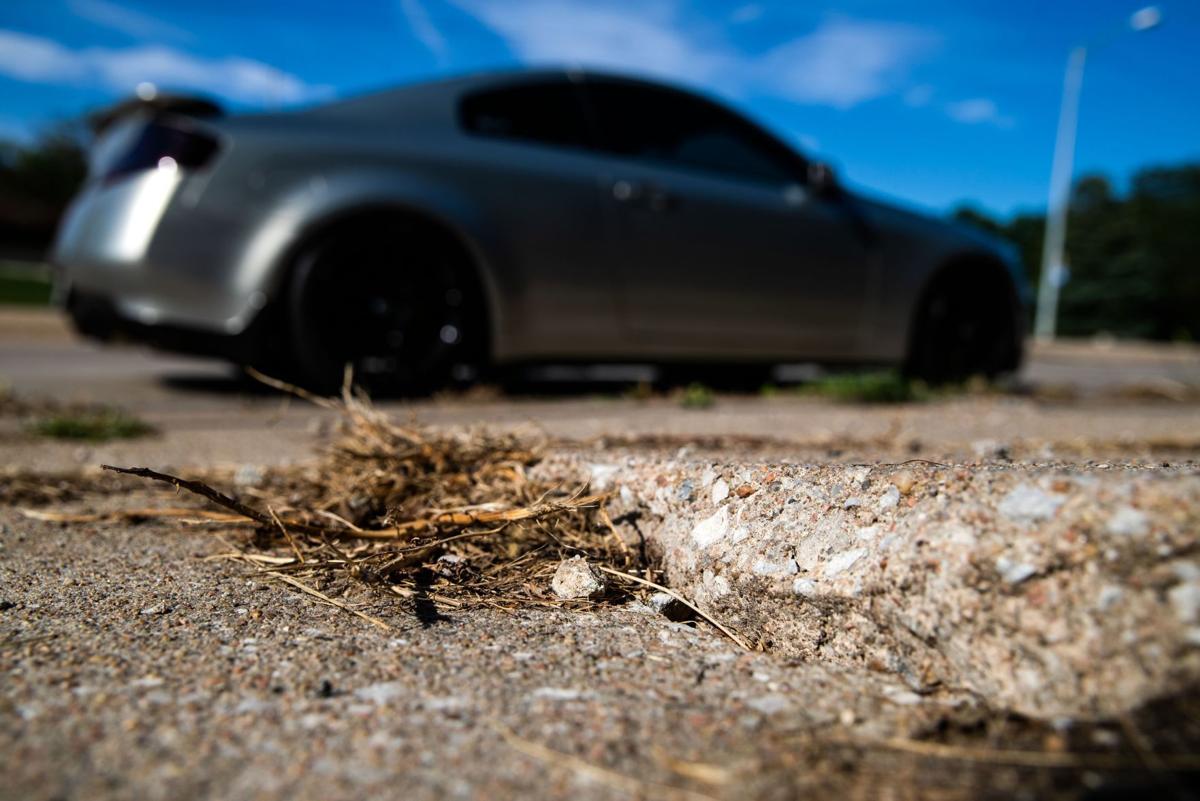 In a city survey of 258 people, 92% said fixing the pavement on Crown Point Avenue was important. 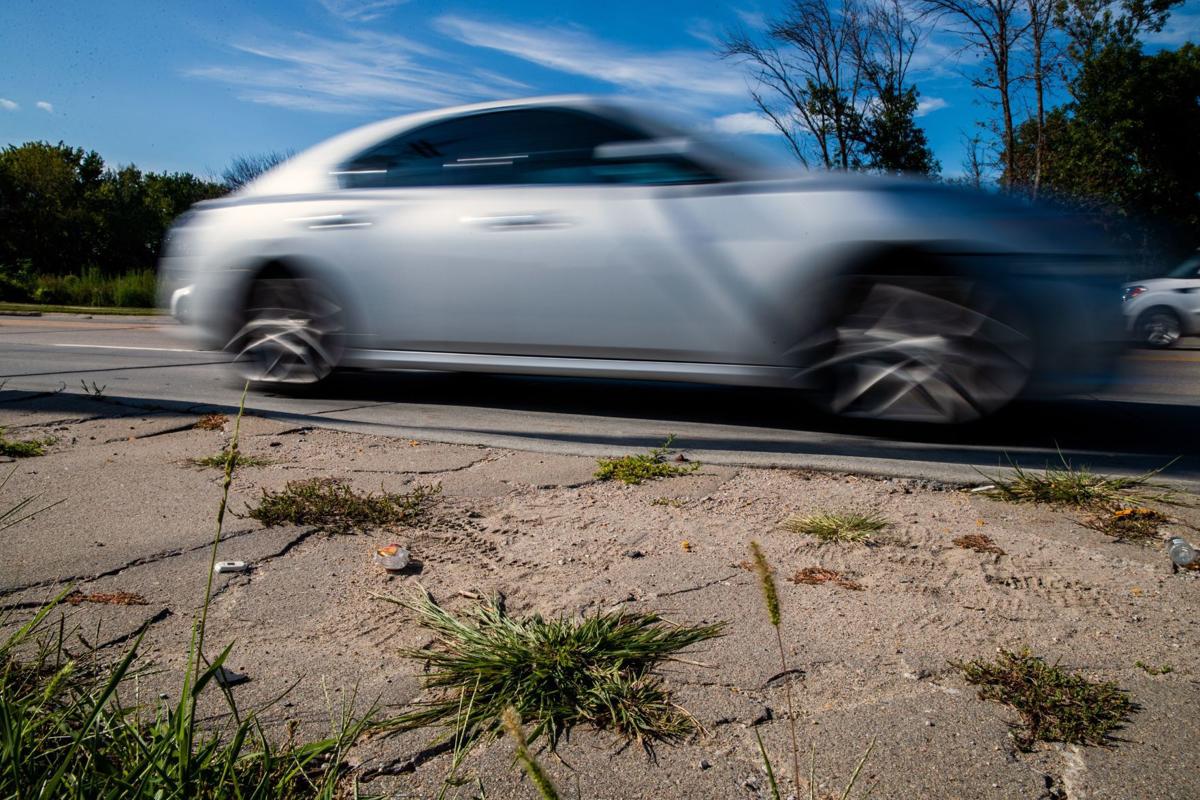 A vehicle goes west on Crown Point Avenue near 78th Street. Crown Point was built in 1972. 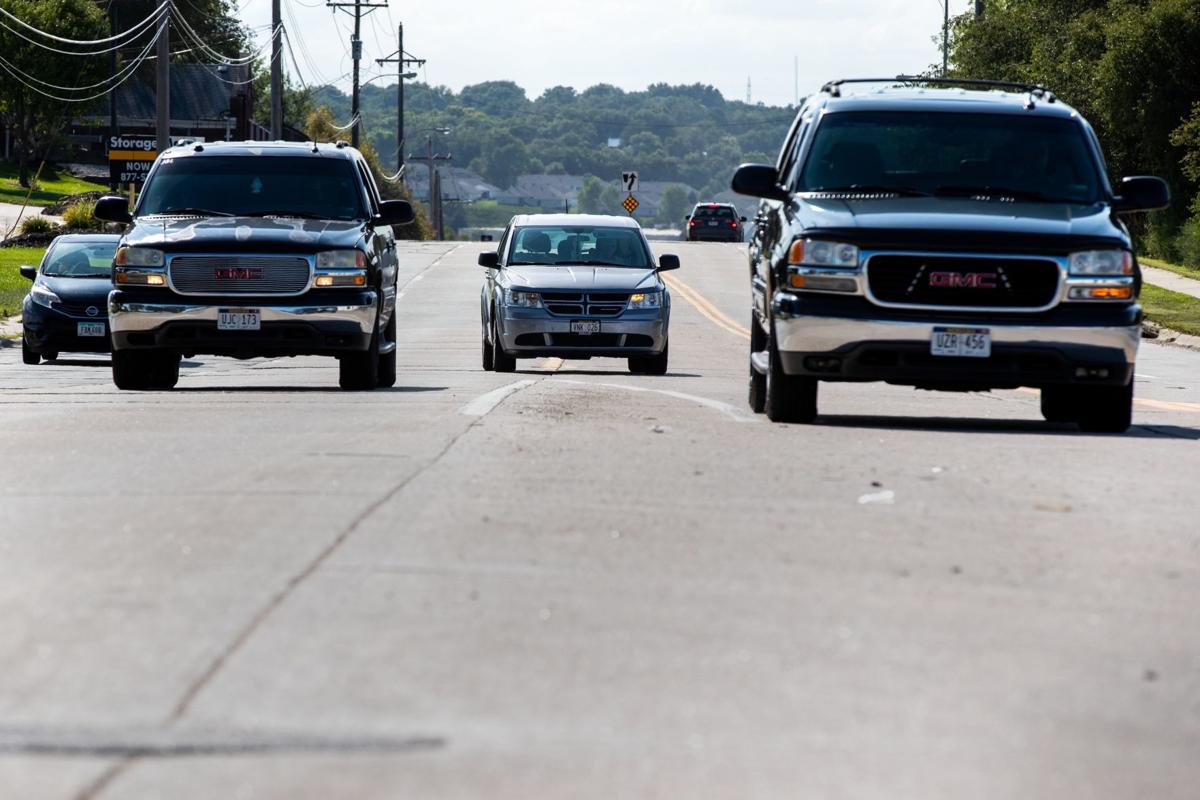 Crown Point Avenue’s four lanes will be reduced to two, with a turning lane, when it’s repaved. People had a low opinion of a two-lane street in a city survey. 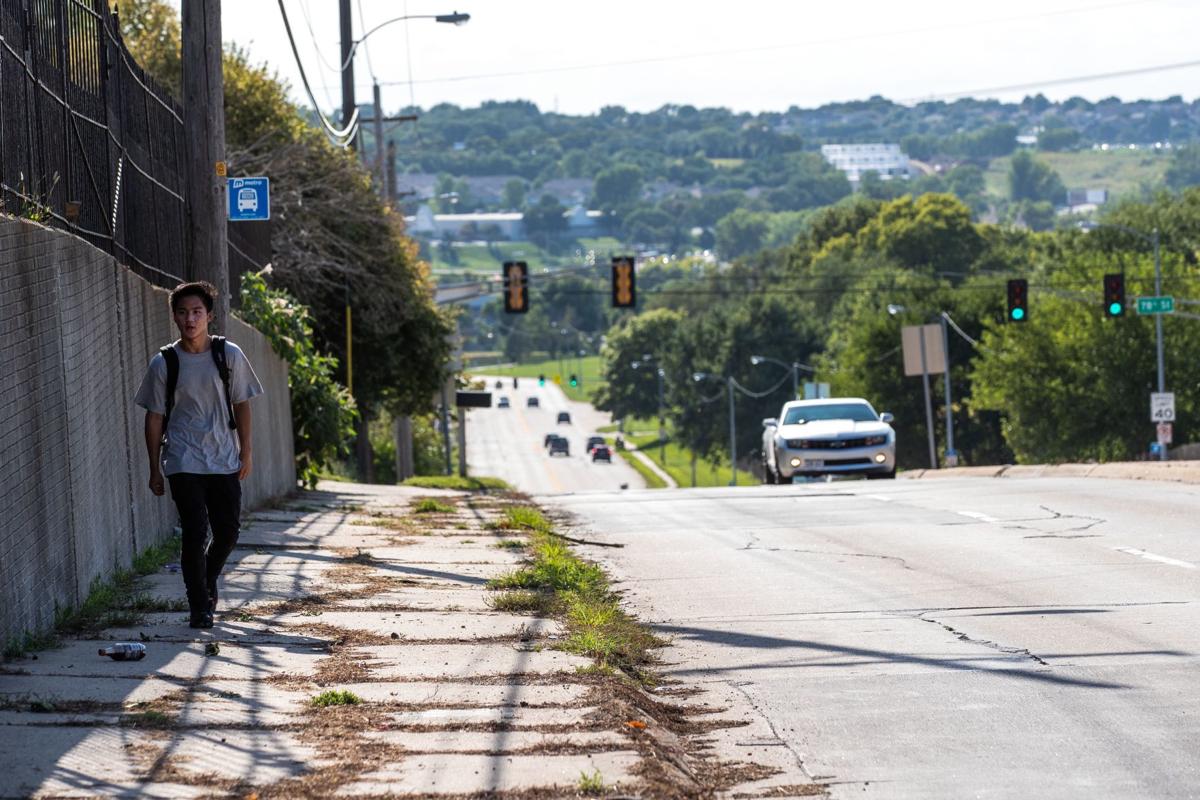 Moe Soe, 15, a tenth grader at Northwest High School, walks west on Crown Point Avenue. The city will install a 10-foot-wide multi-use trail on one side of the street when it is repaved next year.

When the City of Omaha fixes the broken-down Crown Point Avenue, it will try a different approach.

Next year, the city will repave the northwest Omaha street, but also eliminate two through lanes of traffic on what’s currently a four-lane street.

Instead of reinstalling traffic signals, it will build four roundabouts in the stretch from 72nd Street to Blair High Road.

Beyond simply fixing sidewalks, the city will build a 10-foot-wide, multi-use trail on one side of the street.

It’s part of an effort to implement a policy called “Complete Streets” — a trend in street design spreading across the nation and now finding a place in Omaha. The idea is that streets are built not only for cars, but also pedestrians, bicyclists and transit riders.

And it’s more than a passing fad. In 2015, the Omaha City Council made it the city’s official policy to approach every street project as an opportunity to “create safer, more accessible streets” for every user.

Two weeks ago, after years of work behind the scenes, the city publicly released a draft of its 85-page implementation guide, which is expected to go before the council again next year.

But already, Omaha faces a challenge in the implementation: Will a car-centric city accept streets that are not totally beholden to the car?

In the neighborhoods around Crown Point Avenue, Omaha’s complete streets push will face its first test with the general public as the city pilots some of the concepts. Having heard about the plans, some neighbors are skeptical, particularly about the roundabouts.

“Honestly, we just want it paved,” said Kirstin Peyton, who has lived in the neighborhood since 1997 and works in the area. “That’s all we want. That is all we want.”

Not only has street design entered a new era, but the community around Crown Point Avenue also has evolved since the street was built a half-century ago.

According to the city, the concrete pavement was built in 1972.

On one end of the street, Northwest High School opened in 1971. On the other end, the Vickers hydraulics production plant opened in 1969, employing more than 2,000 people at its peak.

Today, the Vickers plant has become Sorensen Park Plaza shopping center. And Sorensen Parkway serves as the primary artery through the area instead of Crown Point.

Gayle Sturdivant, design division manager for the Omaha Public Works Department, said Crown Point Avenue is overbuilt for today’s traffic. Even if the city were focusing on a project only for cars, it would never restore four lanes, she said.

“If you look at traffic today, you only need the two lanes,” she said. The revamped Crown Point also will have a middle turning lane.

In planning for the project, the city surveyed 258 people about the future of the street but didn’t present an option for maintaining four lanes.

People had a low opinion on making the street two lanes, rating that at less than 2 on a scale of 1 to 5. Three lanes scored better, but just as many people were against that idea as in favor.

When asked what issues need to be addressed for Crown Point, 92% said fixing the pavement was important. Safety and speeding rated behind that, at 46% and 40%.

Jeff Barnes, who has lived in the Stillmeadow neighborhood for 25 years, said he feels like the public’s input was ignored.

Said Barnes, “This is kind of an incubator for, in large part, how much the citizenry will accept before they say, ‘Now wait a minute.’ ”

Sturdivant said the project will give residents what they wanted — new pavement and a street that will slow traffic and improve safety.

But that will take a different form than a traditionally designed street.

Roundabouts are somewhat new to Omaha, Sturdivant said, but they have proved to reduce the number and severity of crashes at intersections.

Sturdivant said the city is recognizing that some users have needs that are different from those driving cars.

There are Metro bus riders on the corridor and school bus riders from Northwest. But not every student rides the bus, Sturdivant said. Some neighbors might want to walk or bike to Sorensen Park Plaza, which can be challenging today, she said.

Scott Dobbe, executive director of Omaha by Design, said he hopes people will be patient with the changes coming to Omaha. Dobbe, whose urban design and planning organization has contributed to Omaha’s complete streets plans, said he would ask people not to judge until they see the changes in operation.

“I really believe residents will be pleasantly surprised,” he said.

Peyton said she rides a bike and would love to use the multi-purpose trail. At the same time, she said, the trail’s western end will stop at the busy Blair High Road. That also leaves it short of the trailhead for the popular Keystone Trail at Fort Street.

Ultimately, plans call for the Keystone Trail to extend from Democracy Park at Fort Street north to Cunningham Lake. But neighbors say they’ve heard talk of that connection for years.

Sturdivant, however, says it’s on the way — and could happen within three years. In the city’s annual budget talks, Councilman Pete Festersen has proposed an amendment to plan to build that link in 2020.

Emiko Atherton, director of the National Complete Streets Coalition within the group Smart Growth America, said 1,500 complete streets policies are in place across the country, and Omaha is right on schedule by moving into implementation.

How the implementation happens is really important, Atherton said. It’s particularly important for agencies to engage the community and communicate about the changes, she said.

“Implementation is more than just laying down the infrastructure,” she said, “and I think we forget that a lot.”

Papillion, Gretna, Sarpy County and the Omaha-Council Bluffs Metropolitan Area Planning Agency are taking the first step toward determining the location of a potential interchange along Interstate 80 near 192nd Street.

Motorists on 84th Street may notice a smoother commute later this year or early next year.

Grace: Bicycling to work (and back) in Omaha comes with ups and downs

This bike-commuting thing is still very vanguard for Omaha, which has a much smaller cycling commuter community than other cities where cycling is embraced and respected by motorists.

You're right. Omaha-area traffic is getting worse, especially at night

After tracking more than 310 million travel miles locally, TomTom found a typical congestion level of 14% in Omaha — meaning trips around the Omaha area take 14% longer than they would without congestion.

City Council set to vote Tuesday on Stothert’s proposed $1.1B budget. Here's what you need to know

Judge approves plea deal for Iowa farmer who appeared on 'The Bachelor,' 'Dancing With The Stars'

Chris Soules pleaded guilty in November to a reduced charge of leaving the scene of a serious injury accident for the April 2017 crash that killed 66-year-old Kenny Mosher.

Traffic and safety experts promote the zipper merge, saying it reduces congestion by 40 percent. But here's the problem: if not everyone does it, the system doesn't work, and people stuck in traffic end up frustrated by those who seem to be flying past them. And most Omahans definitely don't do it.

A 16-year-old boy remained in critical condition at an Omaha hospital Thursday after being thrown from a vehicle in a rollover crash near Weeping Water, authorities said.

Papillion wants a safer downtown for pedestrians. One idea: a town square off-limits to cars

After Abby Whitford was struck in a downtown Papillion crosswalk, 15 people called the Mayor’s Hotline with suggestions and concerns about the crosswalk. Dozens more posted their ideas on Facebook. The city collected those responses and summarized them in a document, a copy of which officials provided to The World-Herald.

Months of frustration boiled over during Tuesday's City Council meeting about a lack of progress in hiring and retaining Public Works employees to fix and plow streets.

'The worst street in town': See which road will get a $3.5 million makeover

The City of Omaha will undertake a $3.5 million project in 2020 to restore the brick street, improve sidewalks and realign parking along the street.

The project's first step calls for building an administration building and two housing units near 120th Street and Rainwood Road in northwest Omaha.

From the archives: Harney Street trail idea would connect midtown and downtown

The Harney Street Cycle Track was included in the city's Capital Improvement Program under Mayor Jim Suttle, but removed under Mayor Jean Stothert.

Crown Point Avenue in northwest Omaha between will be rebuilt in line with Omaha’s “complete streets” policy. Two through lanes for traffic will be removed, roundabouts will be added and a new multi-use trail will be built.

In a city survey of 258 people, 92% said fixing the pavement on Crown Point Avenue was important.

A vehicle goes west on Crown Point Avenue near 78th Street. Crown Point was built in 1972.

Crown Point Avenue’s four lanes will be reduced to two, with a turning lane, when it’s repaved. People had a low opinion of a two-lane street in a city survey.

Moe Soe, 15, a tenth grader at Northwest High School, walks west on Crown Point Avenue. The city will install a 10-foot-wide multi-use trail on one side of the street when it is repaved next year.