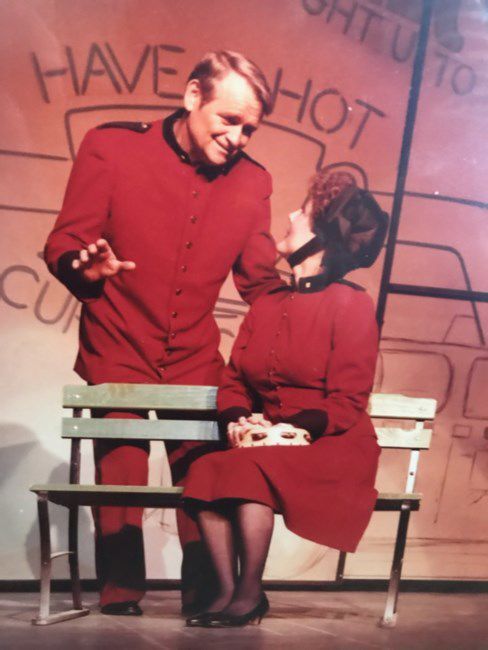 Omahan Don Kalal, who died on Oct. 14 at age 92, was in several Omaha Community Playhouse productions, including "Guys and Dolls" in the 1984-85 season. He is pictured with Dawn Buller-Kirke. 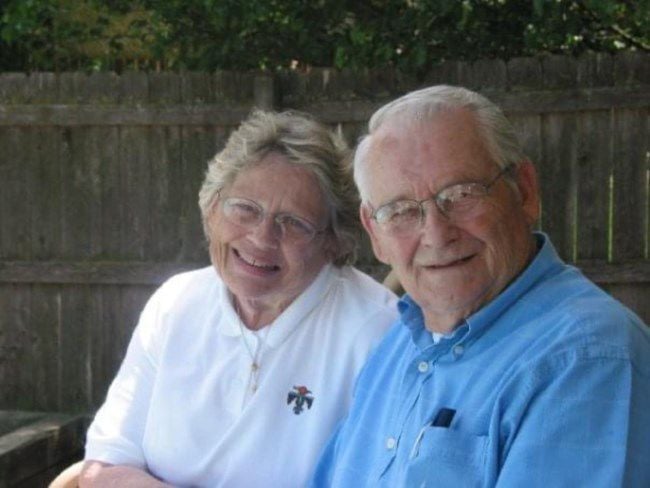 Jackie and Don Kalal met at Tech High School and had been married for 72 years when Don died on Oct. 14.

There was always love, music and laughter in the Kalal home.

And Don Kalal, the head of the family, spread it around the community as well.

Kalal, of Omaha, started singing and acting in high school with his eventual wife, Jackie, and didn’t completely stop until his death on Oct. 14 at age 92. He had been suffering from dementia and living at Oxbow Living Center in Ashland.

In assisted living, said son Jim, Kalal liked to entertain the workers and fellow residents by yodeling in the halls.

He started joking as a kid as well. He was born in Omaha and grew up in the Florence neighborhood near Forest Lawn Cemetery.

As a young man, he earned money mowing the grass around the gravestones.

“I’ve got a lot of people under me,” he told people about the job.

Don Kalal graduated from Omaha Technical High School, then joined the Navy. When he was stationed in San Diego, Jackie came to visit him and they eloped. They were married for 72 years.

The Kalals came back to Omaha, where Don became a PBX installer for Northwestern Bell. He also was in the Naval Reserve for about 30 years.

In his leisure time, he performed in musicals such as “Guys and Dolls,” “Man of La Mancha” and “Shenandoah” at the Omaha Community Playhouse in the 1970s and 1980s. He won two Theatre Arts Guild awards for his work.

Kalal’s humor became one of his trademarks at the Playhouse, said Stan Lassegard, a fellow cast member in several shows.

“He was one of the funniest men I knew,” Lassegard said. “He could look at any situation and find a joke, even if (the situation) wasn’t even remotely funny.”

Jim said his dad also did impressions of actors such as John Wayne and Frank Fontaine (who played a drunk on “The Jackie Gleason Show”).

And the elder Kalal was part of the Cabaret Theater with three other performers — Frank De George, Sue Perkins and Phyllis Noble.

With Jackie, their four sons and a daughter, he also formed a family ensemble that sang at sports banquets and other public gatherings across the city.

“We would rehearse in the car, then go in to sing,” Jim Kalal said.

Music remains a big part of the Kalal legacy. Jim and his wife, Pam, have had a musical group, Pam and the Pearls, that has played across the region. Don often would be in the audience.

“We would be singing in the park or something and we’d get him up (on the stage) and he’d always sing a song with us,” Jim said.

Jim’s sister, Elaine, and her husband, Chad Stoner, also are musicians who have performed at The Jewell Omaha, a nightclub in the Capitol District.

Above all, Kalal is remembered for his positivity and kindness.

“He was the consummate gentleman. There was never a harsh word out of his mouth ever about anybody,” said fellow thespian Lassegard.

Son Jim said his dad could be a disciplinarian, but there was never any doubt he loved his family. He spent the time others devote to hobbies with his wife, kids and eventually grandkids.

In addition to Jackie, Jim, Pam and the Stoners, survivors include sons Wayne (Ann), Rich (Kathy) and Kevin (Peggy) Kalal, 17 grandchildren and 19 great-grandchildren.

“You could just see the sincerity in his eyes when he would smile at you,” Jim said. “He understood life and love and what it was all about.”

Omahan Scott Darling, 71, remembered for his gregariousness and volunteer work

“He was very much an includer,” his wife said. “He wanted people to be acknowledged. He could find the good in everyone.”

For 50 years, Bette Swanson was the face of and the force behind the Bellevue Little Theatre.

In the new show, “Takeout Twins,” they re-create foods they’ve enjoyed as takeout on tours, then order the dish from a local restaurant to check out its authenticity, sometimes with a guest taster.

'Grounded' flies high at the Playhouse, thanks to accomplished actor and crew

Omaha Tribe mourns passing of Eugene Pappan, one of its few fluent speakers of native language

Eugene Pappan, who died Friday at 89, was one of the few members of the Omaha Tribe who could still fluently speak the tribal language, Umónhon

American Midwest Ballet has created the Home Cinema Edition of “The Nutcracker,” the popular and colorful Christmas ballet by Pyotr Ilyich Tchaikovsky.

Staffers at Kaneko used the pandemic break to revamp part of their building, dedicating one-third of the space to an education wing. They also changed how they schedule exhibits and brainstormed ways to diversify their patron base.

Omahan Don Kalal, who died on Oct. 14 at age 92, was in several Omaha Community Playhouse productions, including "Guys and Dolls" in the 1984-85 season. He is pictured with Dawn Buller-Kirke.

Jackie and Don Kalal met at Tech High School and had been married for 72 years when Don died on Oct. 14.