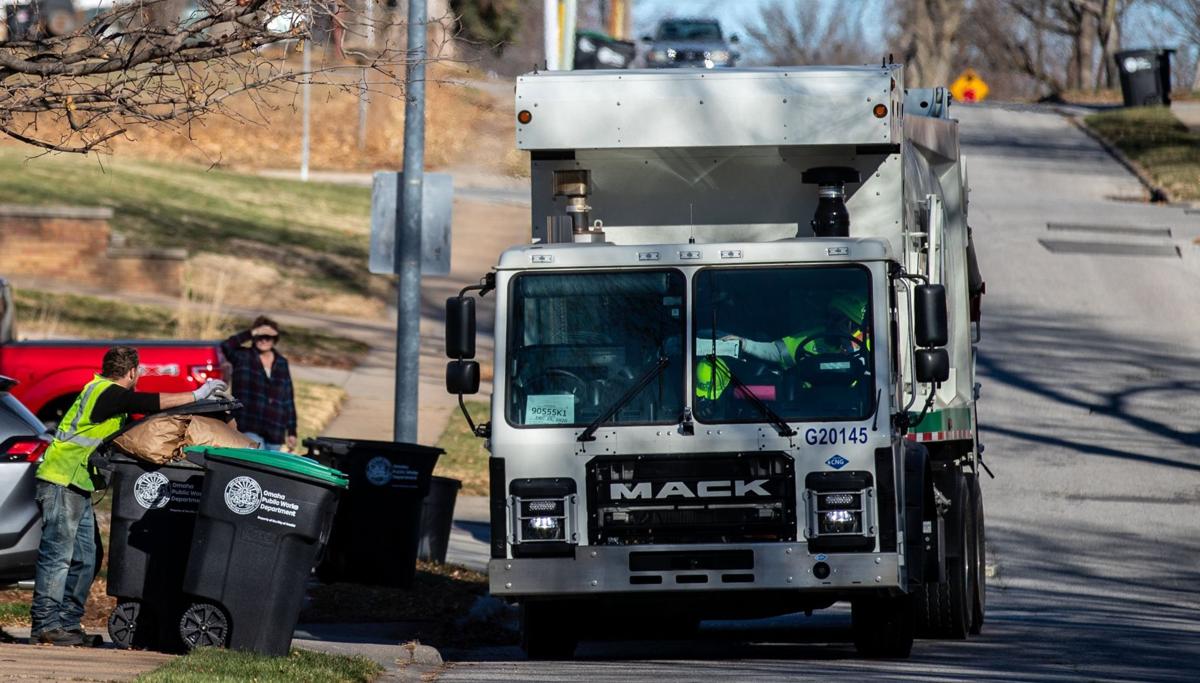 A worker in southeast Omaha moves a trash cart toward a mechanical arm that will dump the trash into an FCC truck. Several thousand households last week waited a day or more after their normal collection day for trash pickup.

New trash carts sit next to old recycling bins and yard waste bags on the first day of new service near 96th and Jefferson Streets on Monday.

Scott McCabe wheeled his 96-gallon trash cart to the curb of his west Omaha home Sunday evening, ready to see how the city’s new garbage, yard waste and recycling program would fare.

McCabe’s home in the Mission Hills neighborhood near 168th and Q Streets was one of 7,500 households that FCC Environmental Services, the city’s new waste hauler, missed during its first three days on the job.

“I understand that you can have first-week bugs in the system, but at the same time it’s like, we’re a full two days behind,” the Omaha sales representative said Wednesday.

FCC and city officials are asking for patience. They say the missed collections are just part of the learning curve of a new company taking on one of the larger residential trash contracts in the country.

The missed collections in the first three days represented about 5% of the city’s 150,000 residences.

Monday was the first day of FCC’s 10-year contract to collect curbside waste in Omaha, taking over the service from Waste Management. Residents now use two 96-gallon covered carts on wheels to set out their food waste, cardboard, aluminum cans and yard waste.

Drivers are learning the ins and outs of new routes and new trucks. Residents must also learn some new rules about setting out their trash to ensure a smooth collection process.

“It’s always challenging starting (new contracts) — we know that going into them,” Dan Brazil, FCC’s director of collection services, said at a press conference Wednesday. “(We) just ask for a couple weeks of patience and you’ll see a drastic improvement.”

Why have some collections been delayed?

Multiple factors contributed to the missed pickups, according to the city and FCC.

Most of the misses occurred in west Omaha, where FCC is using fully automated trucks. The driver operates an arm that picks up the carts and dumps them into the truck.

In older parts of the city, where many people park on the street, FCC is using rear-loading trucks that require a helper to load the carts onto a mechanical arm.

FCC hired about 60% of former Waste Management drivers, and those drivers are still getting the hang of the new equipment, Brazil said.

Also, some residents are still putting out their old trash cans, rather than using the new 96-gallon carts, and FCC won’t collect from the old containers.

Yard waste collection will be unlimited during a four-to-six-week period in the fall, but the rest of the time, people must purchase a sticker for each bag and bundle, which costs $1.98 plus tax. They are sold at Hy-Vee, Family Fare, Supermercado Nuestra Familia, Westlake Ace Hardware, Ideal Hardware and Menards locations.

Another snag: Construction at Firstar Fiber, the city’s current curbside recyclables processor, has led to longer wait times for trucks waiting to drop off materials, the city said.

Also, more people have opted into FCC’s special collections program, which allows residents over the age of 70 or those with a medical disability to set their carts in a designated spot near their home. The number of homes in the program has increased from about 2,400 to about 6,300, according to the city.

What’s being done to catch up?

FCC is calling in backup, bringing in employees from other states to add drivers and routes over the next week.

Crews also will be working Saturday. Brazil said FCC should be completely caught up by the end of the week.

Some people have reported having trouble reaching someone about their missed collection. The city’s hotlines are receiving a high volume of calls, so additional staff members are being added to the city’s Solid Waste Hotline, said Jim Theiler, the city’s assistant director for environmental services.

Those who have missed collections should leave their carts at the curb.

Beginning Thursday, old trash cans and green recycling bins can be disposed of at Under the Sink, 4001 S. 120th St. It will be open 9 a.m. to 5 p.m. Tuesday through Saturday.

People already have been able to take the old containers to FCC’s site at 5902 N. 16th St.

Old trash cans can also be placed in the new trash carts for disposal — and recycling bins can go in the recycling cart — but FCC is asking people to use one of the drop-off sites to reduce the amount of trips trucks must make to the landfill.

How can I help the process go smoothly?

The most important step people can take is to set out the carts correctly, officials said.

The carts should be set out by 6 a.m. They should be spaced 3 feet from one another and other objects like cars and mailboxes. They should be as close to the curb as possible, and the arrows on the lids should face the street or alleyway.

Brazil said a typical collection takes 15 seconds, but if an employee has to get out of the truck to separate the carts or turn them around, it can last more than a minute. Those extra seconds start to compound.

All trash, yard waste and recycling must be contained in the two carts, and the lids must be able to fully close. Trash bags and other debris cannot be placed next to the carts.

The company attempts to educate people about how to set out the carts. Each truck is equipped with a camera that can capture a photo of improperly placed carts. An FCC employee will then go visit the home to show the photo and offer tips.

In other cases, an FCC employee will tie a tag to someone’s cart with written comments about what to do.

Said Brazil: “The more help we get from the community, the better your service will be.”

COVID, lack of major events, curbed much of Omaha's scooter use

City Council members have expressed interest in giving the scooter pilot program another try in 2021, and the mayor might be open to the idea.

The second week under Omaha’s new trash collector is off to a better start, officials say.

“We've let people down in these first couple weeks, and we will fix the problem,” Omaha Mayor Jean Stothert said.

A worker in southeast Omaha moves a trash cart toward a mechanical arm that will dump the trash into an FCC truck. Several thousand households last week waited a day or more after their normal collection day for trash pickup.

New trash carts sit next to old recycling bins and yard waste bags on the first day of new service near 96th and Jefferson Streets on Monday.