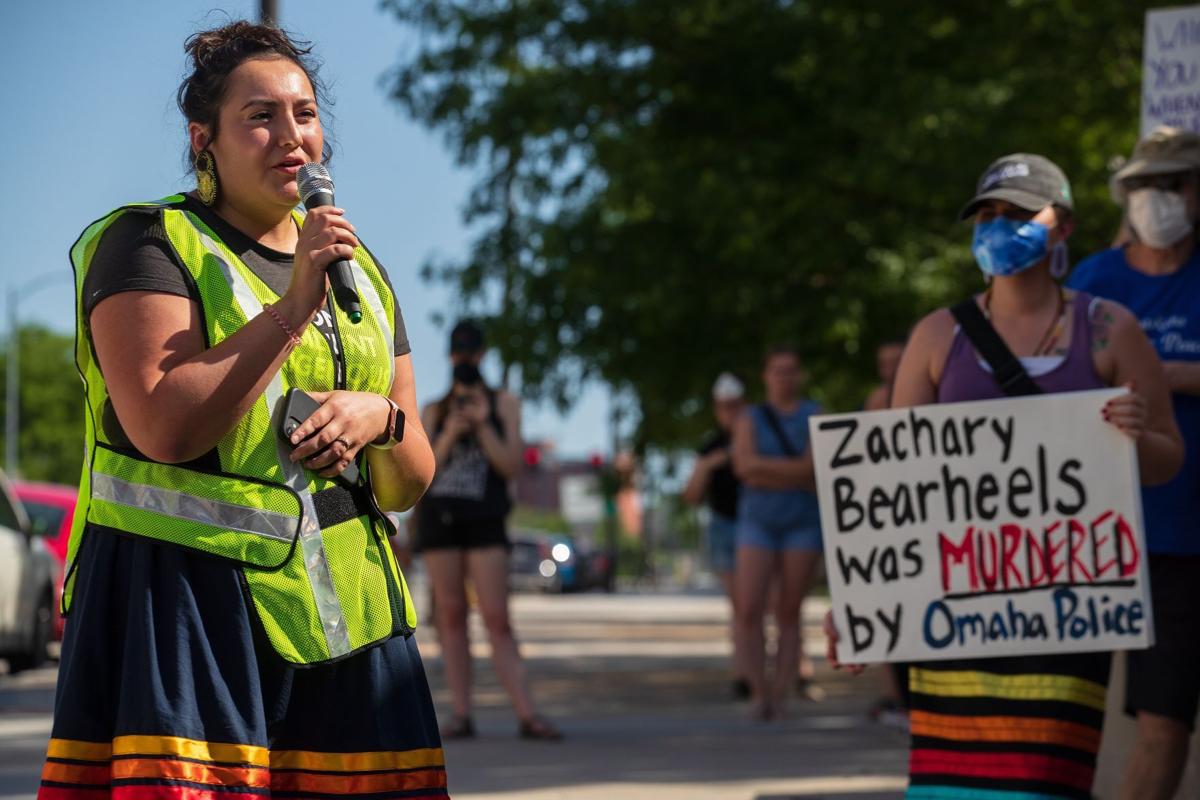 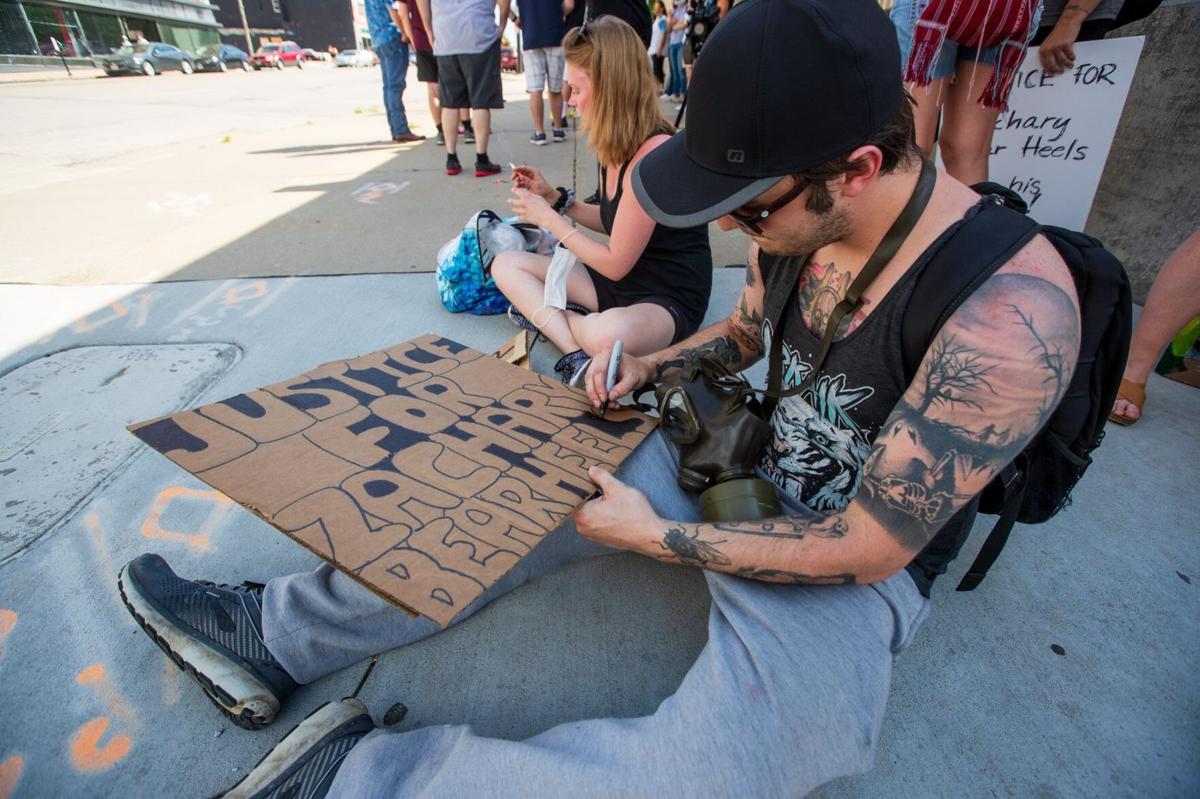 A protestor makes a sign for before Friday’s march. Zachary Bear Heels died in Omaha police custody three years ago. 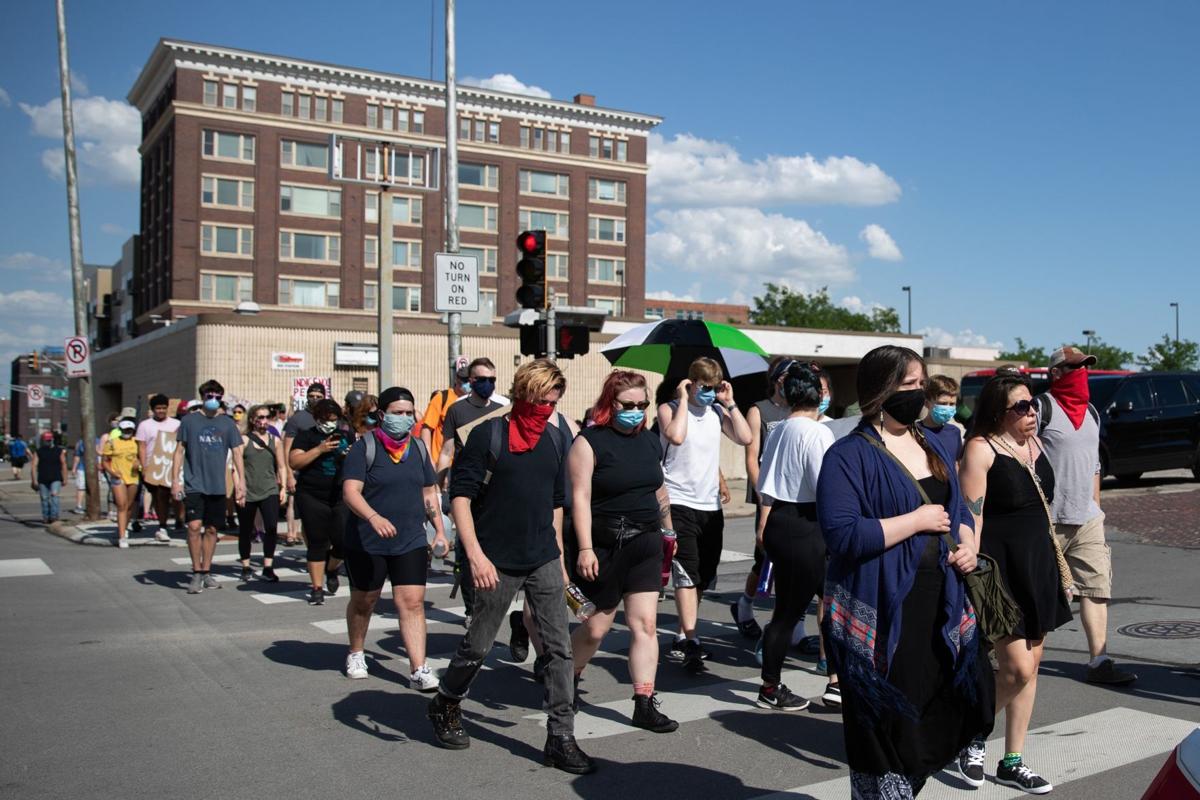 Hundreds attend a march for Zachary Bear Heels ending at 60th and Center on Friday. Bear Heels died three years ago after being punched and shocked with a Taser by police. 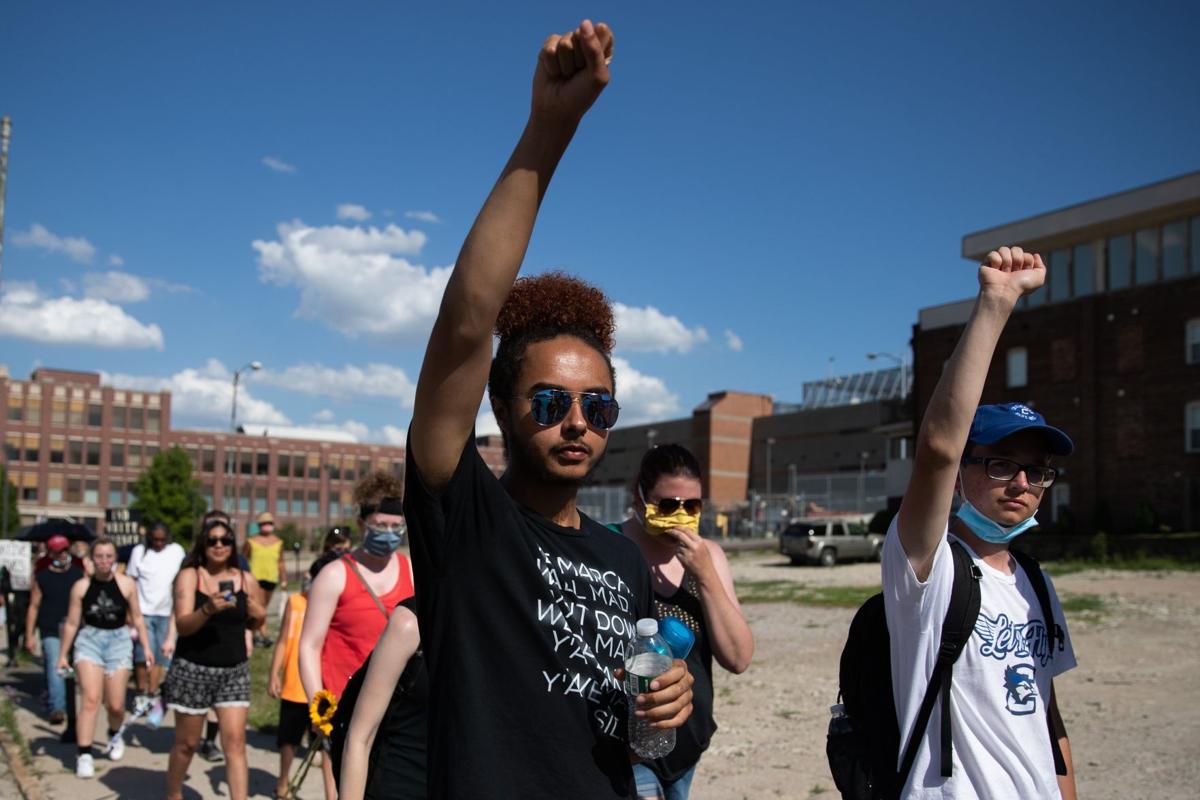 Hundreds of people attend a march to remember Bear Heels that ended at 60th and Center Streets on Friday.

As the late-afternoon sun beat down on the nearly 200 people gathered at 60th and Center Streets, Tonya Olsen urged the crowd to imagine how Zachary Bear Heels felt on the same night, three years ago, in the same spot.

The mentally ill Native American man wandered around Omaha on June 5, 2017, lost and in desperate need of help.

A group of marchers on Friday afternoon retraced his final steps, making the 4-mile trek from the Greyhound bus station downtown to the Bucky’s convenience store at 60th and Center, where he died after police punched and shocked him a dozen times with a Taser.

“What we walked through, the heat, thirsty, that’s exactly what happened to Zach,” Olsen said. “And all I kept thinking about was how hot he probably was, how tired and how lonely he was.”

The third anniversary of Bear Heels’ death fell as protesters across the country took to the streets again to denounce police brutality and racism.

The Omaha Police Department still needs to be held accountable for his death, Olsen said, even though charges against two officers were dropped and three out of four won their jobs back, as decided by three arbitrators in April. A wrongful death lawsuit filed by Bear Heels’ mother against the city, an Omaha police sergeant and the four officers is still ongoing.

As she led the march to 60th and Center, organizer Kateri Petto said preventing “the loss of brown and black lives at the hands of police brutality starts here in our own community.”

“This is a fight that a lot of people have been working towards for a long time, and it’s on us now to continue that fight,” she said.

Bear Heels was a 29-year-old Native American man who had schizophrenia and bipolar disorder.

He was on his way from an aunt’s house in South Dakota to his mother’s house in Oklahoma City when he was told to get off the bus in Omaha because of his behavior. When he didn’t arrive as expected, his mother called Omaha police the next day to report him missing.

From the bus station, he made his way to the Bucky’s near 60th and Center Streets. Police were called after Bear Heels refused to leave. The responding officers included Scotty Payne, Ryan McClarty, Jennifer Strudl and Makyla Mead.

Police detained Bear Heels and put him in a cruiser. They consulted with his mother, Renita Chalepah, who asked them to take him to a crisis center. She and the officers decided they would drop him back off at the bus station instead.

After a struggle involving officers, including Strudl and Mead, Payne shocked Bear Heels a dozen times with a Taser — some of the shocks coming while Bear Heels was handcuffed and sitting limply against the rear tire of a police cruiser. McClarty punched Bear Heels repeatedly after Bear Heels worked his hand free from a handcuff.

He stopped breathing and was later declared dead. A coroner determined that Bear Heels died a “sudden death associated with excited delirium, physical struggle, physical restraint and use of a (Taser).”

“As I get older, nothing has really changed for my people,” said Levelle Wells, who serves on the City of Omaha’s Native American advisory board and is president of the Big Elk Native American nonprofit.

Marisa Miakonda Cummings, a member of the Omaha Tribe, said America was built on systemic racism. That wound has been felt by generations of Native Americans who still experience deep disparities when it comes to health, income and employment.

“We struggle with alcoholism and we struggle with addiction because we are hurting,” she said. “Our hearts hurt and our spirits hurt because our way of life was taken from us violently.

Note: Renita Chalepah, Zachary Bear Heels' mother, said Saturday that she now spells her son's last name as two words. This story has been updated to reflect that spelling.

Photos: Several rallies and protests in Omaha on Friday

A Black Lives Matter rally and march at Memorial Park in Omaha on Friday, June 05, 2020.

A day of rallies and remembrance in Omaha: Crowds gather to call for equality and peace

Roughly 200 people attended a rally at Memorial Park, which ended with a march into Elmwood Park. And a prayer vigil for James Scurlock was held in the early evening at 24th Street and Camden Avenue in North Omaha.

From Grand Island to Chadron, towns across Nebraska rally. 'Silence is violence.'

From small towns to large, many Nebraskans are expressing solidarity with the Black Lives Matters movement.

Douglas County Attorney Don Kleine announced Friday that his office will not move forward with a misdemeanor assault trial against Ryan McClarty, a former Omaha police officer. BearHeels' mother, who has a wrongful death lawsuit pending against the city, said she was heartbroken there would be no trial for McClarty.

No Omaha police officers will be convicted in the June 2017 death of a mentally ill Oklahoma man who was stranded in Omaha.

A year after a mentally ill man died in Omaha police custody, department beefs up training

Early on June 5, 2017, Zachary Bearheels, who was bipolar and schizophrenic, died after one officer shocked him with a Taser a dozen times and another punched him repeatedly.

In an email to faculty, staff and students, UNL Chancellor Ronnie Green said he had been shaken to his core by the previous week, starting with the “unjust and senseless” death of George Floyd. Since then, he said he had been listening to black voices in the community and reflecting on national and UNL history on the challenge of racism.

Letter from the editor: We'll listen to our diverse community; there's nothing to fear

It is part of my pledge to you as The World-Herald’s editor that we will launch efforts to be inclusive, to improve outreach and to give a platform to diverse voices, including through new regular opinion contributors.

Greg Moore: Police and black folks — the swagger and disrespect must end

Many whites know cops as fathers, brothers, cousins, friends and neighbors. We, however, know them as a swaggering, disrespectful, and threatening presence.

Legislative panel will hold listening sessions in Omaha, Lincoln on policing and race

The Omaha meeting will be 9 a.m. Monday at the Scott Conference Center at 6450 Pine St. in Aksarben Village. Both events will be livestreamed at netnebraska.org and broadcast live on NET World.

"My community isn't down by 72nd and Dodge," Ellie Akough said. "I wanted the people in $600,000 homes to care because they don't have to. I wanted them to care as much as I care."

World-Herald reporters and photographers are covering a large rally near 72nd and Dodge Streets today.

The Omaha City Council will be asked to approve the settlement Tuesday.

Demonstrations had been planned for Tuesday night, one organizer said, but with news of the indictment, those plans changed to celebrations.

A protestor makes a sign for before Friday’s march. Zachary Bear Heels died in Omaha police custody three years ago.

Hundreds attend a march for Zachary Bear Heels ending at 60th and Center on Friday. Bear Heels died three years ago after being punched and shocked with a Taser by police.

Hundreds of people attend a march to remember Bear Heels that ended at 60th and Center Streets on Friday. 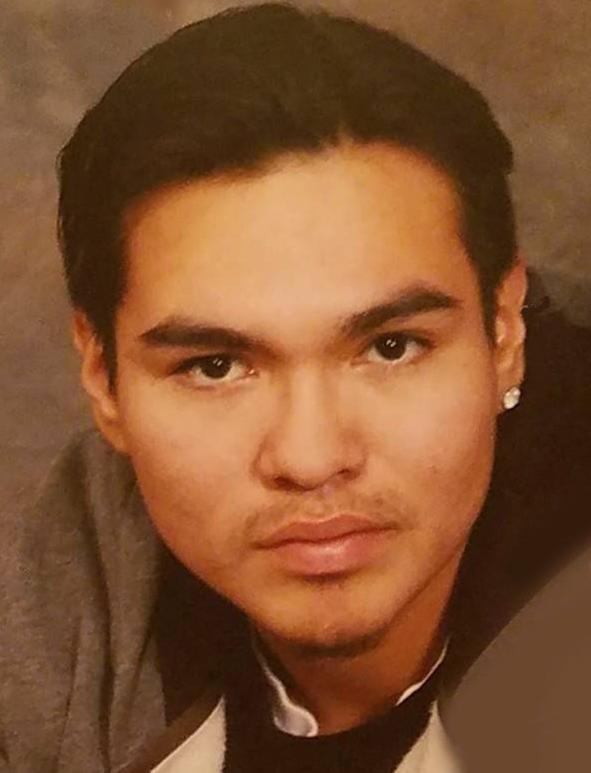