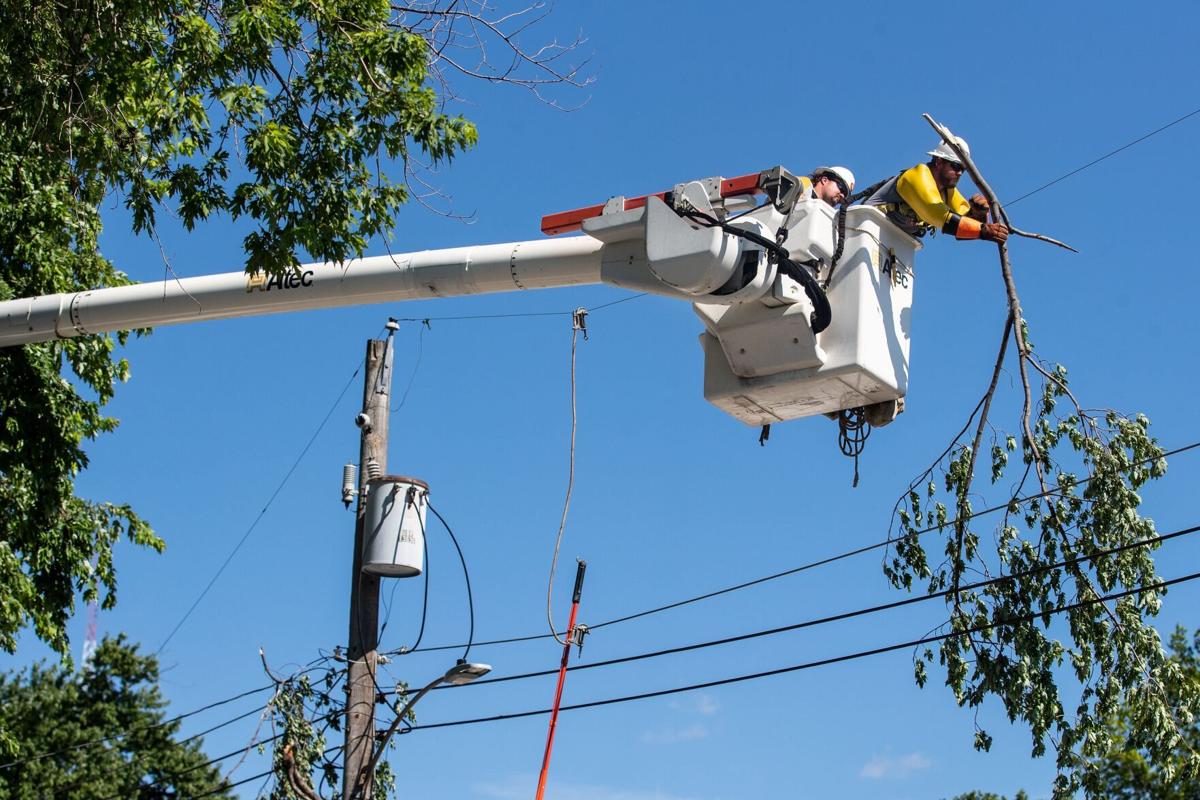 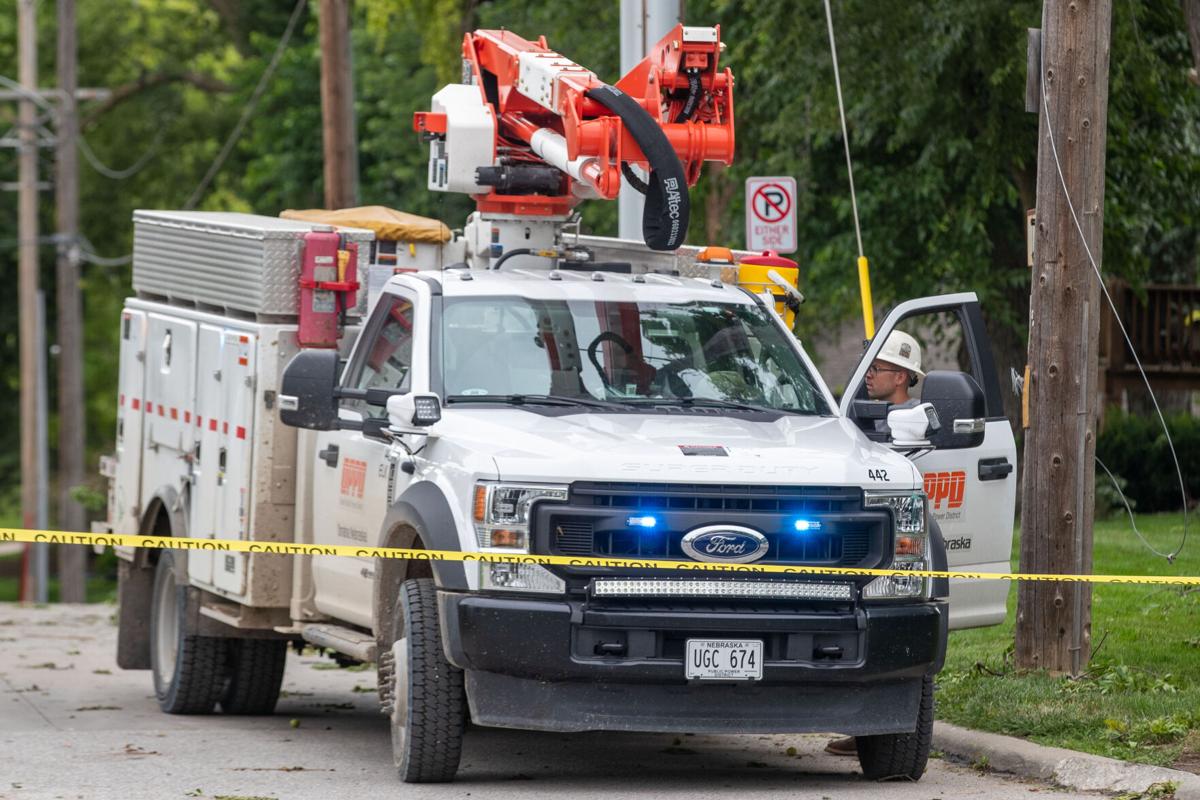 OPPD works to restore power on Dodge Street near UNO on Saturday. 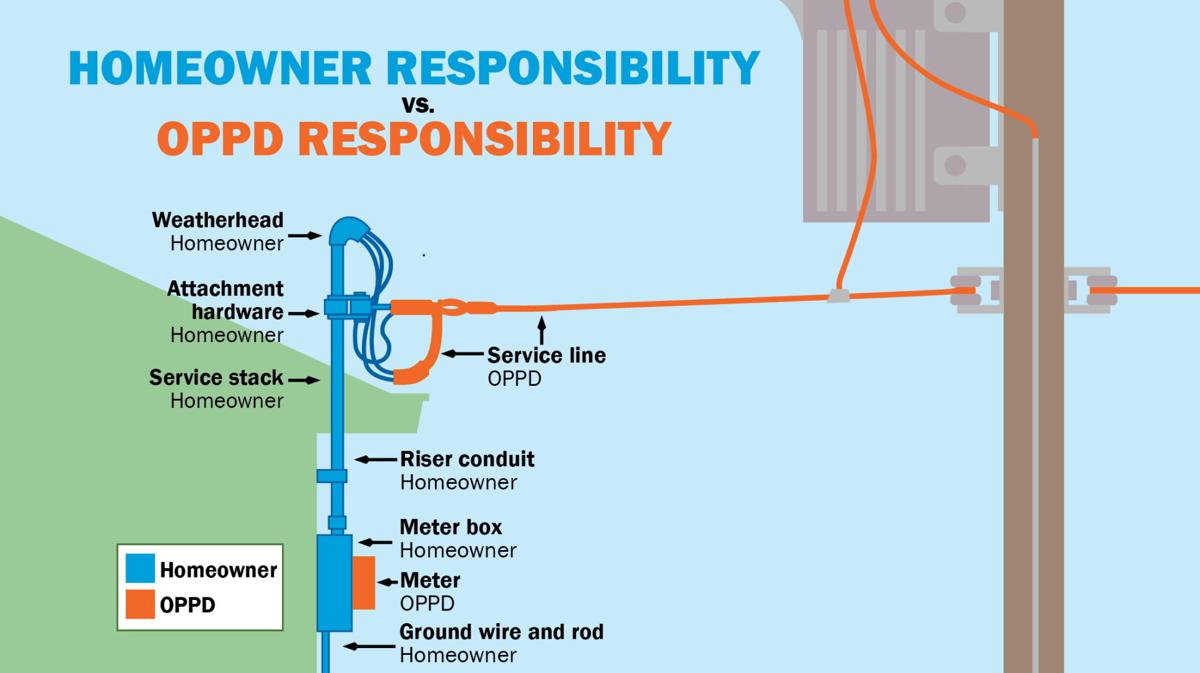 Wednesday noon update: OPPD's outage map says 12,381 customers remain without power. The number of OPPD and mutual-aid crew members and personnel now is up to 956.

New outages, complicated repairs and concerns about worker safety have slowed the restoration of power as OPPD works through its largest outage on record.

Javier Fernandez, CEO of the Omaha Public Power District, said the utility had hoped to have all but 2,000 reconnections made by midnight Tuesday. Instead, there will likely be 15,000 still without power, he said.

“This is not easy news to share,” Fernandez said at a Tuesday afternoon press conference. “There’s a big gap there, a discrepancy, and it’s important for me to talk about that.”

Fernandez said it could be Thursday night before OPPD whittles the outages down to about 2,000, and crews likely will be working into the weekend to bring everyone back on.

Damaged, dangling limbs have been dropping on wires this week, adding new outages. From Monday into Tuesday afternoon, another 4,500 new outages had occurred, Fernandez said.

“I do not want to sacrifice anyone’s safety by pursuing numbers,” he said. “I have asked everyone to be safe and to slow their work … when it needs to be slowed.”

As of Tuesday afternoon, no workers or customers were known to have been injured.

More than 870 people are working in the field to restore power, including nearly 300 assigned to clearing trees and limbs. That’s a record total number of workers, and from the beginning, OPPD deployed more tree trimmers to help with this outage than it had ever done in the past, Fernandez said.

Many workers have been on the job since Saturday. Others have come in from out-of-state, including crews that had been helping with hurricane recovery on the East Coast.

Crews working Tuesday afternoon in Bemis Park hailed from Garrett Power Constructors Corp. in Missouri and were on their sixth day on the road. The workers had been heading home from New York but were rerouted to Omaha after Saturday’s storm. Watts Electric workers from Waverly, Nebraska, were working to repair a power line in Bellevue. In North Omaha, residents have encountered utility crews from Minnesota.

Fernandez said he’s heard rumors that OPPD was favoring certain parts of town based on who lives there. As of Tuesday night, North Omaha had the highest concentration of customers without power, followed by neighborhoods in west-central Omaha.

“I understand there is a perception that we may be favoring one area over another,” he said. “I can tell you with a straight face, we have not done that type of prioritization.”

Restoration decisions are based on getting the largest number of customers back on line the fastest. Some of the neighborhoods with numerous outages are heavily treed and have had higher numbers from the beginning, he said.

Some people have asked why their block or their neighborhood remains without power when everyone around them has power. The answer, OPPD officials said, is that clusters of homes are on circuits and if a circuit is down, then the power is out to those homes until the problem with that circuit can be fixed. These pockets of small outages exist throughout the metro area, they said.

OPPD reiterated that some customers will need to have an electrician make repairs to their electrical connection at their house before OPPD can reconnect the power.

Customers needing such specialized help can work with one of the utility’s “wires down” teams. Fernandez said the utility also has compiled a list of reputable electricians that can do this work for residents and business, and the utility is helping those companies find the parts they need to make repairs.

The utility also has suspended disconnects for nonpayment of bills through July 26.

Fernandez said he realizes that having electricity is a health and safety issue for families, including for those with small children or health problems.

“Our crews have been working for three days, they are exhausted, they are tired, they will not stop because of you, because we care about you,” he said. “I don’t know how else I can convey that.”

Hero or criminal? Who is Julian Assange and what does he stand for

Hero or criminal? Who is Julian Assange and what does he stand for

'Everybody pitched in': Omahans help neighbors after record storm

On the third day since the windstorm, Omaha residents continued to clean up. Pockets of the metro area remained without power, but neighbors offered up freezer space, food and coffee.

Elmwood Park is closed because of tree damage. Omaha Parks Director Matt Kalcevich said the city is assessing other parks to determine how bad the damage is and if it needs to close parts of them.

About 21,000 OPPD customers remained without power late Tuesday afternoon, and some of those Omaha metro residents grew frustrated on their fourth day without electricity.

Editorial: OPPD, municipalities must draw lessons from this storm-damage crisis

OPPD on balance has set a good example through its power restoration work as well as its messaging to the public.

OPPD works to restore power on Dodge Street near UNO on Saturday.