Police chief says Friday night protest could have been worse, but 'turned out to be OK'
3 comments
Share this
Return to homepage × 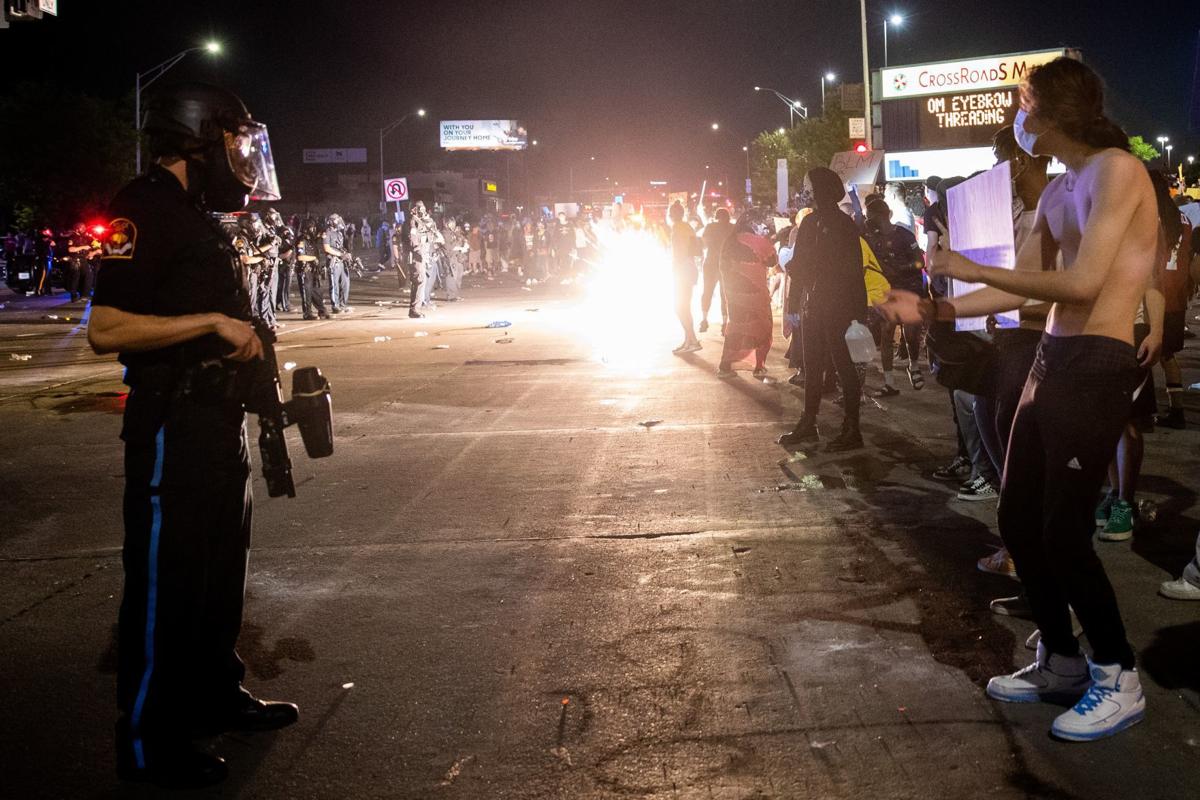 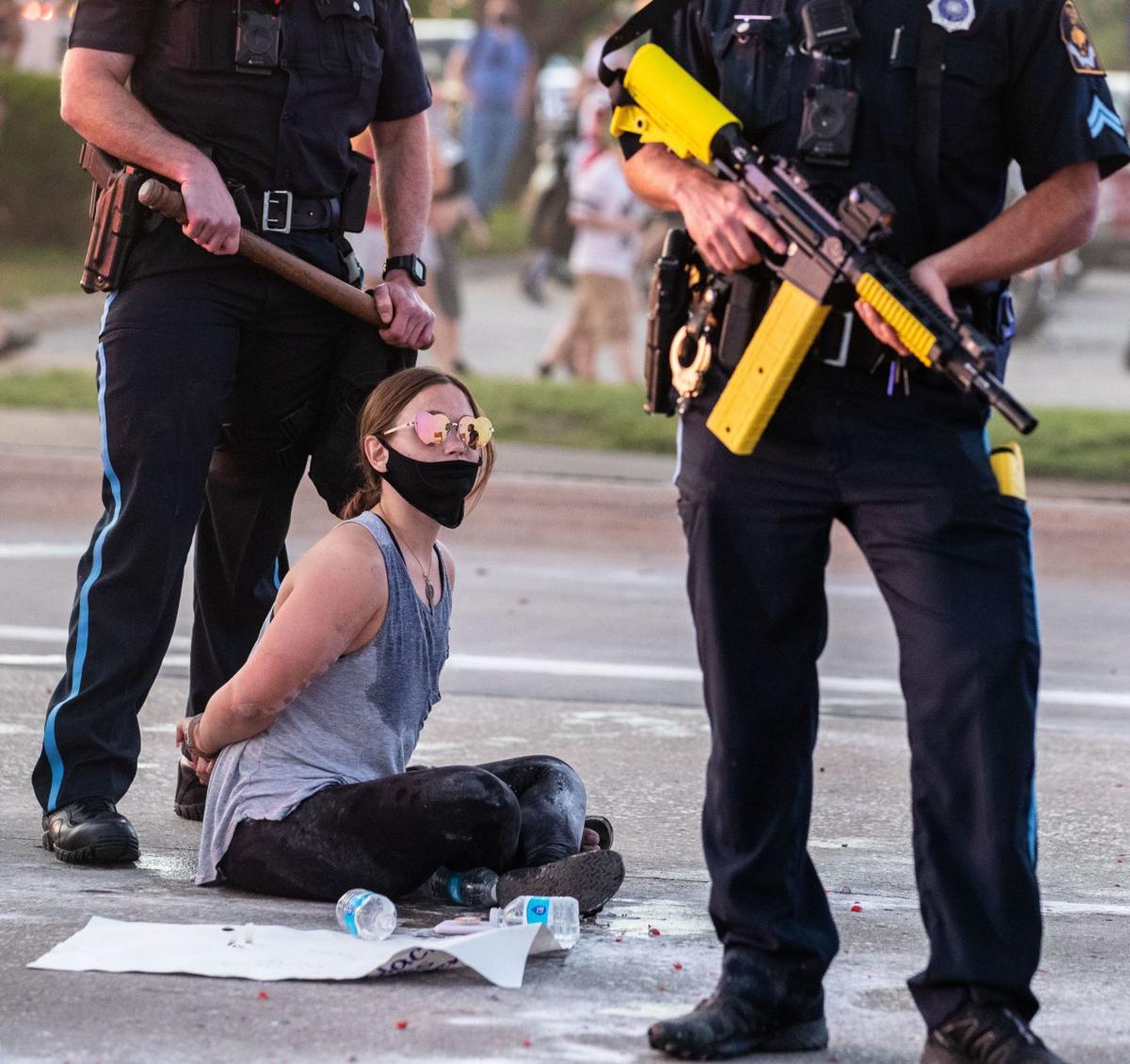 Omaha police are reflected in the heart-shaped sunglasses of a woman who was arrested after sitting in the eastbound lane of Dodge Street. 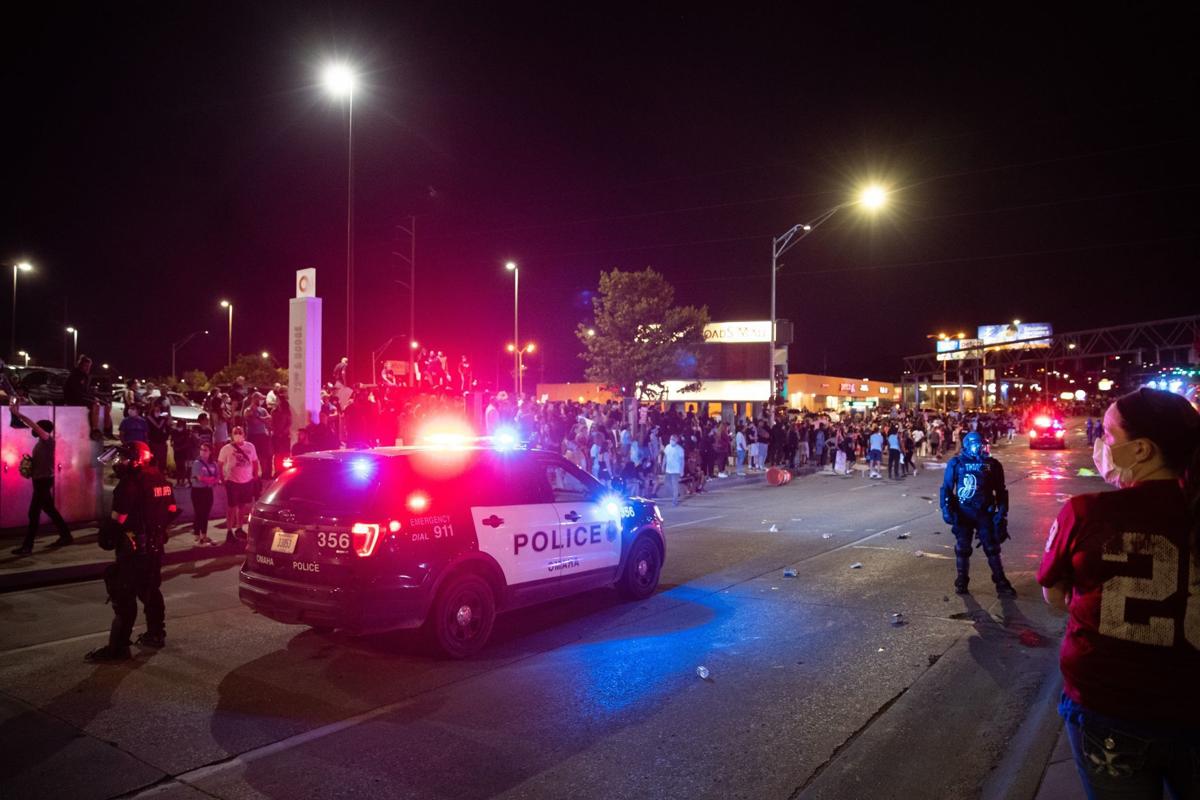 Police and protesters clash during a rally in response to the killing of George Floyd by a police officer in Minneapolis.

Both also stressed that they want Omahans to express their rights to peacefully protest and don’t believe Friday’s or upcoming rallies will tarnish the positive relationships the police department has worked to garner with the community for years.

“Omaha has made tremendous strides. We have some good working relationships,” Schmaderer said in closing of a Saturday press conference. “I’m not deterred or disappointed at all that we take a moment and pause and feel and experience everything that happens because of what took place in Minneapolis.”

Schmaderer said he understands that some in the community are angry at police in general for the in-custody death that occurred in Minneapolis — George Floyd was held down by an officer even as he said he couldn’t breathe.

But he explained that a couple hours after the peaceful rally began Friday evening, it turned violent with people breaking the law. That is when officers needed to use tear gas and pepper balls to disperse the crowd from 72nd and Dodge Streets to keep them safe, he said.

Twenty-one people at the protest were arrested on suspicion of various charges — gun possession, disorderly conduct, destruction of property or failing to disperse. Schmaderer said of the people arrested, 16 were white, three were black and two were Hispanic.

Twelve businesses in the area were damaged — either their windows were broken or there was graffiti. About 12 cruisers were damaged, including one that had “ISIS” carved into the back. Only one protester and two officers had documented injuries — they were treated by medics and released, not hospitalized.

“Things could have been worse but things turned out to be OK,” he said.

Schmaderer was at the command center nearby and was in constant communication with Mayor Jean Stothert, who he later told not to come to the area because the situation was devolving. He provided a rough timeline of how the night unfolded, according to police:

Authorities deemed the area under control by 2 a.m.

“When safety is compromised and lawlessness starts, that is separate and distinct from the original matter that brought everybody there,” he said. “From my viewpoint of the scene … (officers) handled the events that were presented to us in the most professional manner we possibly could.”

There could be protests again tonight and Schmaderer acknowledged that there are some social media posts from residents who don’t plan to be peaceful. He welcomed people to express their opinion but stressed that authorities will intervene if it becomes lawless.

Stothert stood by Schmaderer, his officers, and the other law enforcement agencies that offered assistance, including the Nebraska State Patrol, Douglas and Sarpy County sheriff’s departments and La Vista Police Department.

“When it turned and became violent, the police were doing what they were supposed to do, which is to try to protect everyone there.”

Schmaderer said he wasn’t superstitious but hoped that Saturday’s weather could be on the side of law enforcement.

Law enforcement officials from Omaha, Kearney, La Vista and the Douglas County Sheriff's Department were among those Wednesday condemning a Minneapolis police officer's actions in the deaths of George Floyd.

Anthony Baker organized the rally outside the northeast police precinct at 30th and Taylor Streets, attracting a group of approximately 40 people.

After the crowd at 72nd and Dodge was dispersed with tear gas and pepper balls, more protests broke out around 10 p.m. in downtown Omaha, as police sirens and chants blared from 14th and Harney Streets. Reinforcements raced east on Dodge Street from one protest to another, and police blocked off the downtown intersection.

What began as a peaceful demonstration on one of the city's busiest intersections on Friday devolved into chaos that continued Saturday night into Sunday morning, and spread into downtown Omaha.

For people who’d lived in Lincoln just a few years — or all their lives — they’d never seen anything quite like what happened late Saturday into early Sunday, many hours after a peaceful protest — that had wended its way through Lincoln — turned into a spree of vandalism.

Curfew begins in Omaha after Stothert declares state of emergency

Omaha’s state of emergency will last 72 hours, and the curfew will go from 8 p.m. to 6 a.m. Sunday, Monday and Tuesday nights. Omaha Mayor Jean Stothert could extend it with Omaha City Council approval. The curfew doesn’t apply to people going to and from work, medical personnel, the press, the homeless and some others.

Kyra Parker attended Friday and Saturday’s demonstrations "to peacefully protest something that’s not going right in our world right now.” And she intends to start to create positive change in her new career in the criminal justice system — as a correctional officer at Tecumseh State Prison.

Americans have turned their attention this month to a vital national question: How can our society provide justice?

More from our OWH Editorial:

Omaha police are reflected in the heart-shaped sunglasses of a woman who was arrested after sitting in the eastbound lane of Dodge Street. 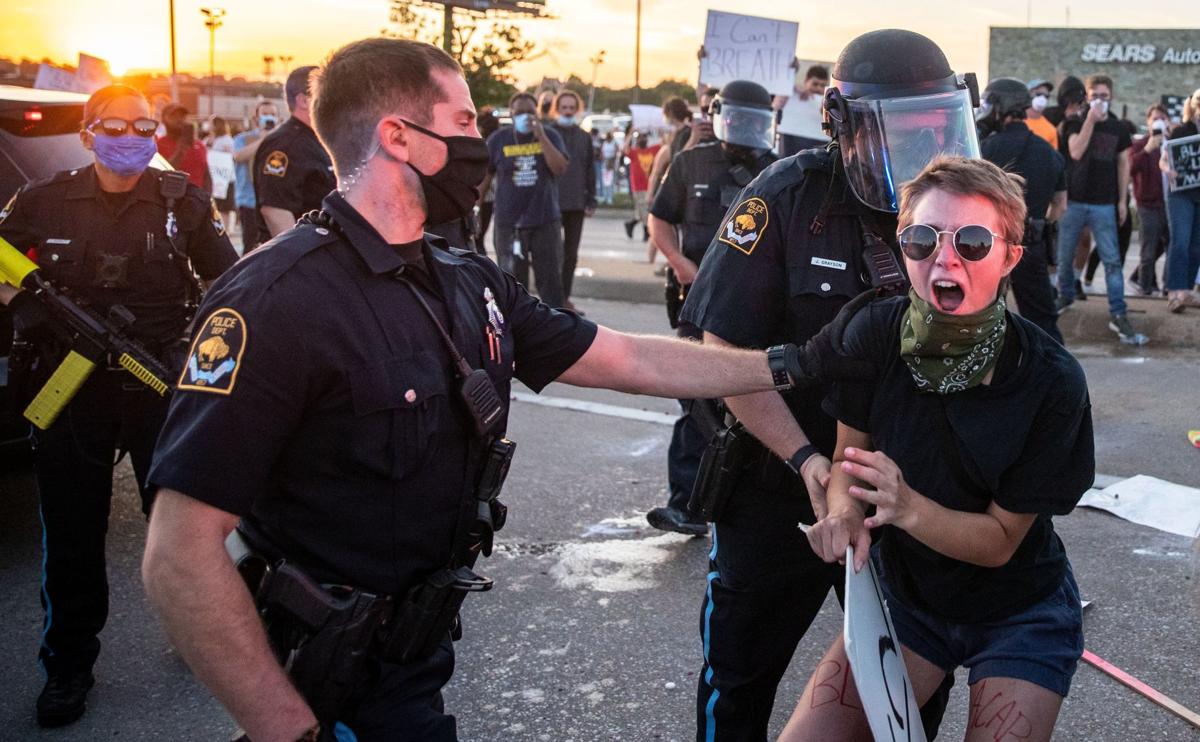 Omaha police push a woman out of the street as she was protesting at 72nd and Dodge Streets. Omaha Police Chief Todd Schmaderer said he understands that some in the community are angry at police in general for the in-custody death of George Floyd that occurred in Minneapolis.

Police and protesters clash during a rally in response to the killing of George Floyd by a police officer in Minneapolis. 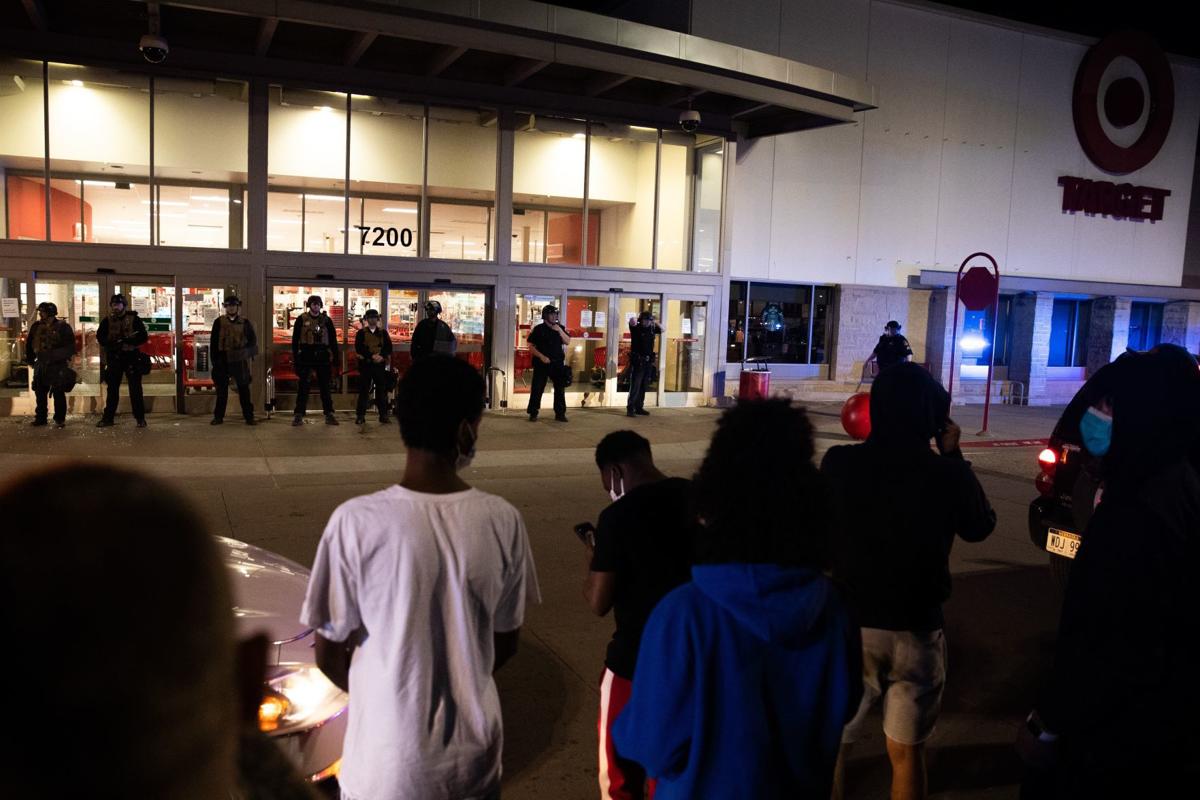 A couple hours after the peaceful rally began Friday evening, it turned violent with people breaking the law, Omaha Police Chief Todd Schmaderer said. Twenty-one people at the protest were arrested on suspicion of various charges.