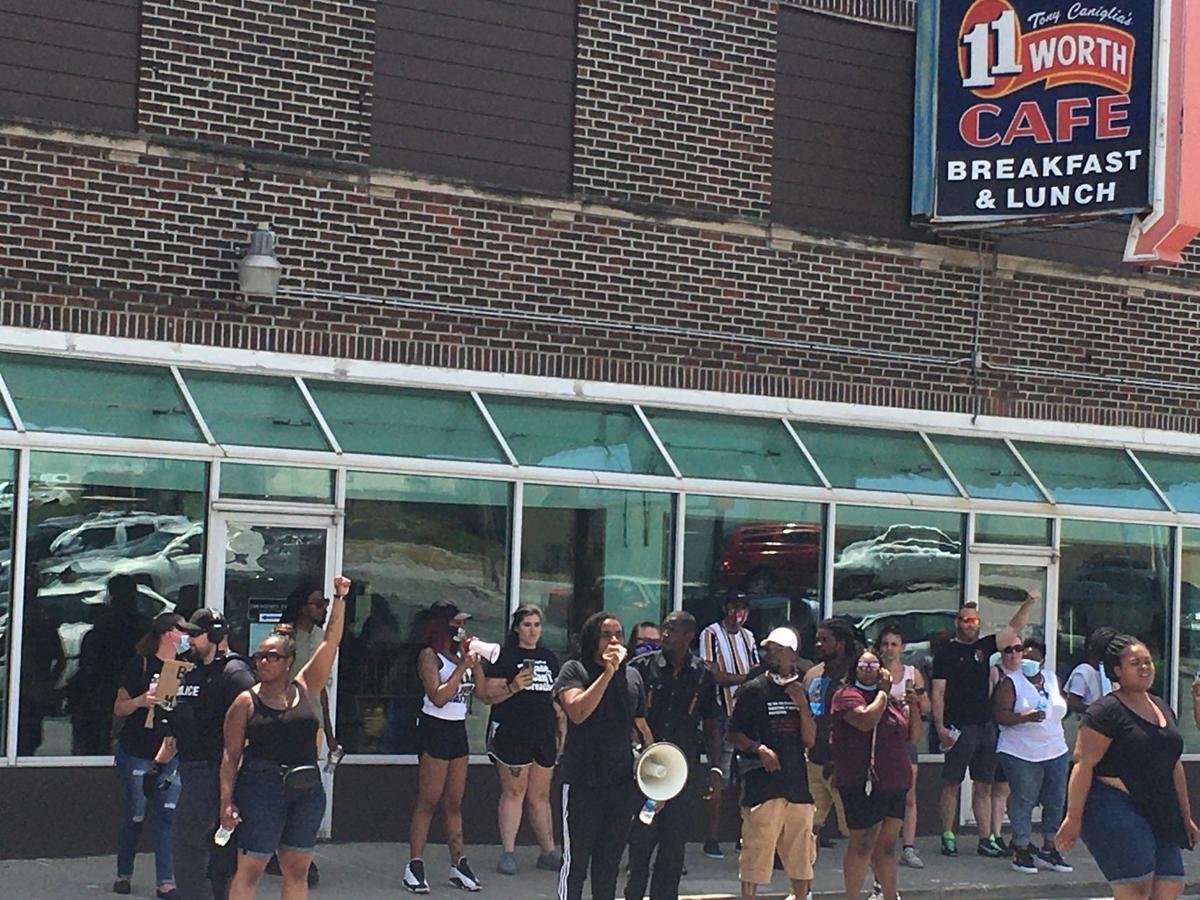 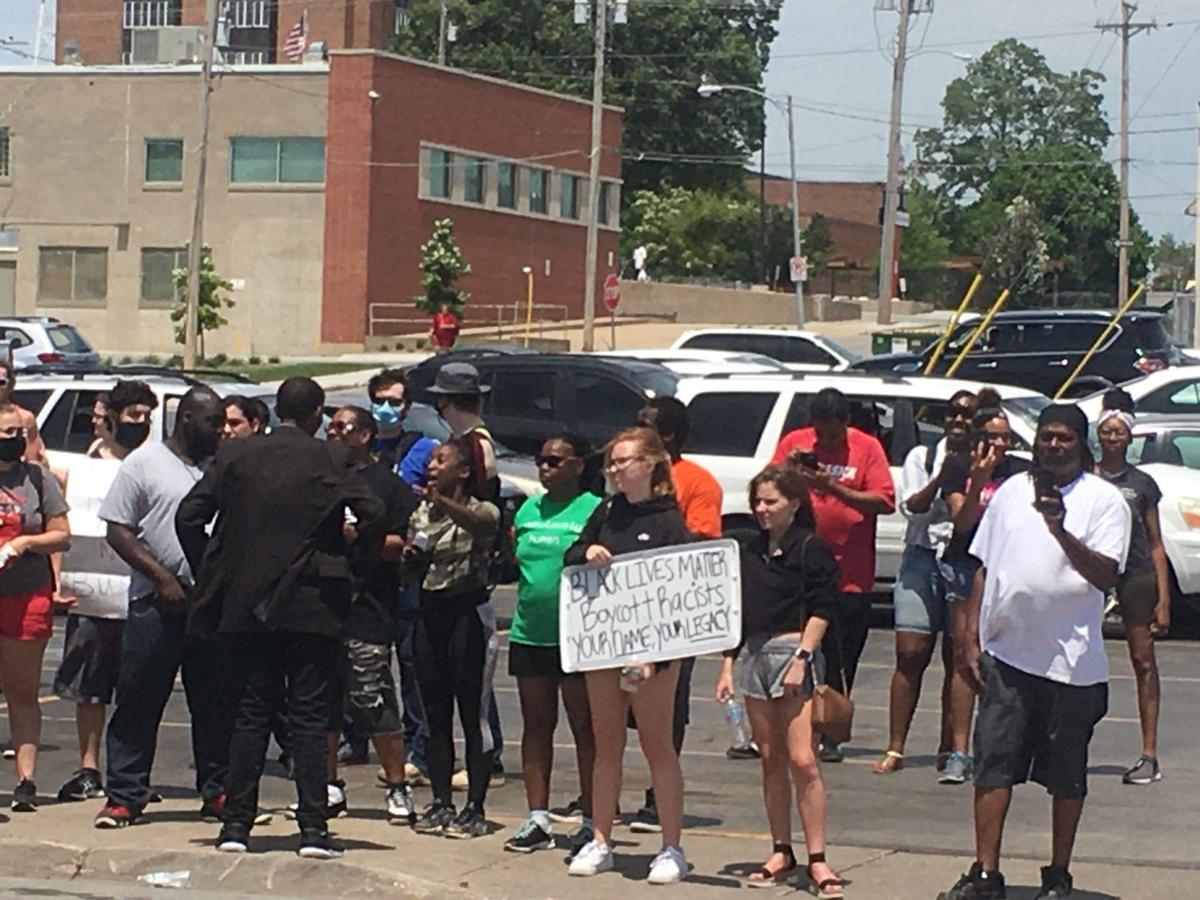 Protests calling for equality and justice were heard again in Omaha on Sunday, including one targeting a longtime Omaha restaurant.

About 75 protesters gathered outside the 11-Worth Cafe at 24th and Leavenworth Streets, chanting “Black lives matter” and “shut it down!”

They said their rally was sparked by an objectionable Facebook post made by the son of the restaurant’s owner. Protesters also objected to a breakfast dish on the restaurant’s menu named for Robert E. Lee, the Civil War Confederate general.

Among other things, protesters demanded an apology from Tony Caniglia Jr., the restaurant’s owner, and that the menu item be renamed. David Mitchell, one of the leaders of the protest, met inside the restaurant several times with Caniglia. The meetings appeared cordial, but they could not reach an agreement that would end the protest.

“There is no longer a negotiation,” Mitchell said. “We want that place shut down.”

Flyers circulated at the rally included the since-deleted Facebook post, which appeared to be made by Caniglia’s son, who is also named Tony. In response to recent protests nationally that had turned violent, the post said, “Get rid of the rubber bullets and it’s time to go lethal.” The post also referred to using rioters “as target practice.”

Caniglia, the restaurant’s owner, could not be reached for comment Sunday. The restaurant did make a Google post in response to negative reviews being posted, indicating the protests were “trying to link Tony Caniglia owner of the 11-Worth Cafe to a negative post on face book that was not made by him. ... We have 44 years of history behind us. Our Staff and customers are the heart and soul of the 11-Worth Cafe. Thank you for your patronage.”

The protesters were loud but peaceful, with leaders reminding those gathered to stay out of the street and not to block the door to the business. Most stood in a parking lot across the street, but at times some stood on the sidewalk directly in front of the restaurant.

Omaha police officers sometimes escorted customers across the street as they left the restaurant and also stood by the doors to keep protesters from blocking them.

“We monitored it, and it went off without any incidents,” said Officer Michael Pecha, a police spokesman.

Also Sunday afternoon, there was another smaller, quieter gathering of protesters outside the Douglas County Courthouse.

You will not beat Nebraska

Events organized by young people in the Omaha area drew hundreds of people Saturday as anti-racism activists seek to broaden the momentum for change.

About 150 leaders signed onto the statement against racism and a commitment to address racial injustice.

Nebraska Rep. Don Bacon joined with Rep. Anthony Brown, D-Md., in introducing a bill to create a commission that would review the names of bases named for Confederate generals.

After protests, 'closed' sign stuck to door of Omaha's 11-Worth Cafe

Protesters said their rally was sparked by an objectionable Facebook post made by the son of the restaurant's owner. They also objected to a dish named for Robert E. Lee.

A handful of protesters have already pleaded guilty or no contest to the charge and were sentenced to seven days in jail.

The cafe faced protests over the weekend over a Facebook post and menu item named after a Confederate general. The owners said they decided to close after enduring verbal abuse, taunting and threats.

Mayor Stothert says she doesn't want the 11-Worth Cafe to go out of business, and the city investigation will look into possible criminal activity during the protests against the restaurant.

No criminal conduct found in 11-Worth protest, but mayor hopes restaurant will reopen

Did protesters cross a legal line when they picketed the 11-Worth Cafe before it closed? Omaha police haven't found criminal wrongdoing. For Mayor Stothert, the question now is whether the restaurant will reopen.

David D. Mitchell, who also is a candidate for Omaha City Council, was booked Tuesday afternoon on suspicion of first-degree sexual assault of a minor.

David D. Mitchell, 27, is charged with first-degree sexual assault of a child in connection with incidents alleged to have occurred in 2014, according to court documents.

Movies in a Minute: "The Little Things"