LINCOLN — Gov. Pete Ricketts pleaded Monday for Nebraskans to protect each other as he ramped up health measures aimed at curbing the spread of COVID-19.

“Folks, this is serious,” the governor said. “Please, please, continue to use the tools we’ve given you to control the spread of the virus.”

Starting Wednesday, those tools will include new statewide health measures mandating that people maintain 6 feet of separation or wear masks in a variety of settings. The measures also limit the size of indoor gatherings to 25% of capacity, down from the current 50%. 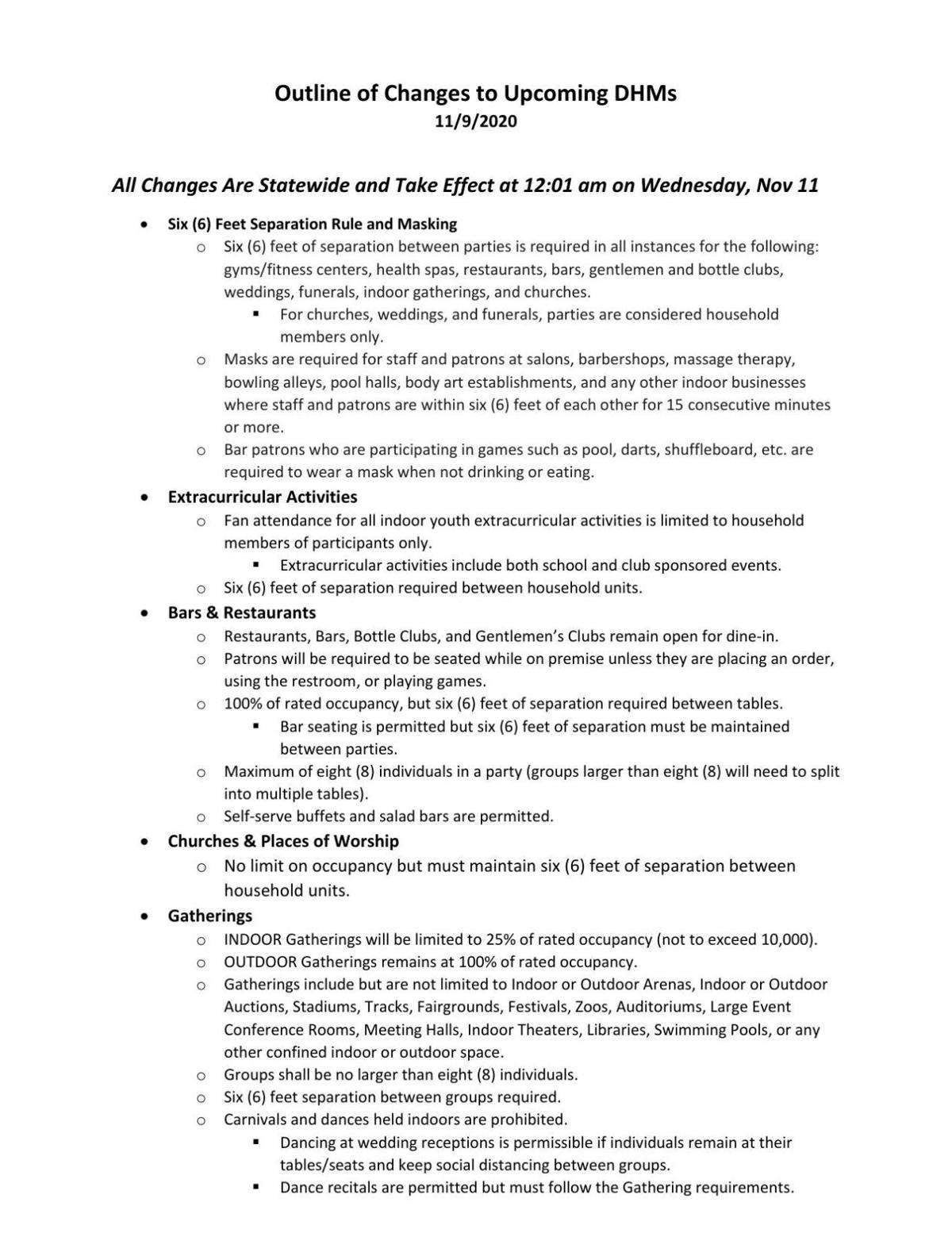 To help make the case, the governor was joined at a press conference by Kurth Brashear, the vice president of institutional advancement at Concordia University in Seward and, as of last month, a virus survivor.

Brashear, 48, said he and his family had been following all the health recommendations until September, when they had some family friends over and “let our guard down.”

On Sept. 24, they got word that two people at their gathering had tested positive. That same day he started getting a cough and a tightness in his chest. His symptoms worsened and, within a week, he had developed a fever and chills and breathing was difficult. A test confirmed that he had COVID-19.

By Oct. 4, he also had significant back pain, and a home oxygen monitor showed that his oxygen levels were in the mid-80s, well below normal levels. A doctor friend urged him to go the hospital. Tests there revealed lung damage, which was described as like “ground glass” in his lungs.

Brashear was sent home with treatment and started improving the next day. The rest of his family escaped infection.

Now, he said, he is considered recovered. But he still has back pain and has to stop to catch his breath if he exerts too much. Health care providers are hopeful but can’t say for sure whether the lung damage will heal.

While public attention has focused on deaths from the virus, Brashear called for Nebraskans to consider as well the lingering health problems of the tens of thousands who have survived.

“As we have always done throughout our history ... I would encourage fellow Nebraskans to look out for one another, to look out for ourselves and to do the things we need to do to stop COVID from happening,” Brashear said.

The press conference followed a weekend during which Omaha-area medical workers launched a social media campaign calling for Ricketts to impose stricter restrictions.

Ricketts had resisted such calls earlier, saying it would take two or three weeks to see the results of an Oct. 21 health measure that cut the size of indoor gatherings.

On Monday, he said state officials had determined that the state needed to do more to slow the spread of the virus and preserve hospital capacity for those who need it. Ricketts noted that the number of people hospitalized with COVID-19 had quadrupled in the last five weeks, reaching 794 people as of Sunday.

But he stuck with his opposition to a statewide mask mandate, similar to those in place in Omaha and Lincoln. He said such mandates breed resistance and argued that it is more effective to educate people about when and where a mask is beneficial.

The health measures he unveiled require 6-foot distancing between people or, if that is not possible, require masks. The rule applies to such places as bars, restaurants, gyms, clubs, churches and other indoor gatherings.

Occupancy at indoor gatherings will be reduced to 25%, with an upper limit of 10,000 people.

Masks are required in hair salons, pool halls, massage therapy establishments, tattoo parlors and any other indoor business where staff and patrons are in close contact — meaning within 6 feet — for at least 15 minutes.

Churches and other places of worship are not subject to occupancy limits, but people can sit only with members of their household, and households must be separated. For wedding and funeral gatherings, up to eight people can be seated at a table, and dancing is allowed at wedding receptions if people remain at their table.

Only people within the same household will be allowed to attend youth extracurricular activities.

Dining in at restaurants and bars is still allowed, but tables must be 6 feet apart and people must remain seated except when going to the restroom, ordering food or playing games such as pool or darts.

The new rules go into effect at midnight Wednesday. They will be in effect through Nov. 30.

Gov. Gary Hergert has long resisted a mask mandate but cited the “alarming rate of COVID infections” and the shrinking pool of hospital beds in changing course.

Monday morning, several Nebraska doctors who had been urging Ricketts to increase restrictions pointed out Hergert’s action and noted that Nebraska had more infections per 100,000 people and a higher rate of positive tests than Utah. However, Nebraska had more hospital capacity available.

Election. Ricketts would not acknowledge Democrat Joe Biden as president-elect but also sidestepped a question about whether he agreed with President Donald Trump’s contention that the election is being stolen. The Republican governor said that media outlets do not elect the president and that there are several lawsuits and potential recounts in the works.

“We have to let the legal process work its way out with regard to this election,” he said, adding: “There’s a number of questions that are out there.”

Adoption. Ricketts proclaimed November as Adoption Month in Nebraska and highlighted the number of children in the state’s child welfare system who are waiting for a permanent home. Last year, the Nebraska Department of Health and Human Services found adoptive families for 457 children. Currently, there are 50 children who are ready for someone to open their heart and home to them, he said.

Record numbers of COVID-19 cases and hospitalizations have prompted health care providers to call for Nebraska Gov. Pete Ricketts to adopt stricter health measures to stem the spread of the disease.

The purchase limits on certain staples at Baker's apply to in-store and pick-up orders.

The Omaha hospital is hiring individuals to assist medical workers with personal protective equipment to better protect staff and patients.

'I finally got my wish': Sen. Groene, who wants herd immunity, catches coronavirus

"I had it, I got over it and everything's fine," Nebraska State Sen. Mike Groene said. "I have no unique story."

Gov. Ricketts, first lady to quarantine after being exposed to COVID at dinner

Nebraska's governor and his wife are in quarantine after a dinner companion tested positive for coronavirus.

COVID in Nebraska is topic of next Science Cafe

Infectious disease experts from the University of Nebraska Medical Center will discuss the coronavirus in Nebraska during the next Omaha Science Cafe.

The announcement comes as the state again reached a new all-time high with 820 patients hospitalized with COVID-19. That's more than double the number reported three weeks ago.

Omaha extends mask mandate until Feb. 23 amid surge in cases

The City Council voted 4-1 to extend the mandate by more than three months as coronavirus numbers surge in Nebraska.

Members of the public are now required to wear a face covering at Council Bluffs City Hall.

Among the new laws going into effect Saturday are a ban on indoor vaping, a measure that doesn't hold people liable for breaking into a vehicle to rescue a child, and special hunting permits.

Ricketts warns of tighter restrictions, but no mask mandate, if hospitalizations keep rising

Gov. Pete Ricketts said Thursday he will impose more restrictive health measures if COVID-19 hospitalizations continue rising in the state, but he continued to oppose a mask mandate.

Gov. Pete Ricketts lays out plans for more restrictions should COVID patients fill 25% of beds. At the current rate of increase it would be only a few days before Nebraska hits the that mark.

Ricketts said he has not sent any messages, of congratulations or otherwise, to President-elect Joe Biden and does not anticipate doing so.