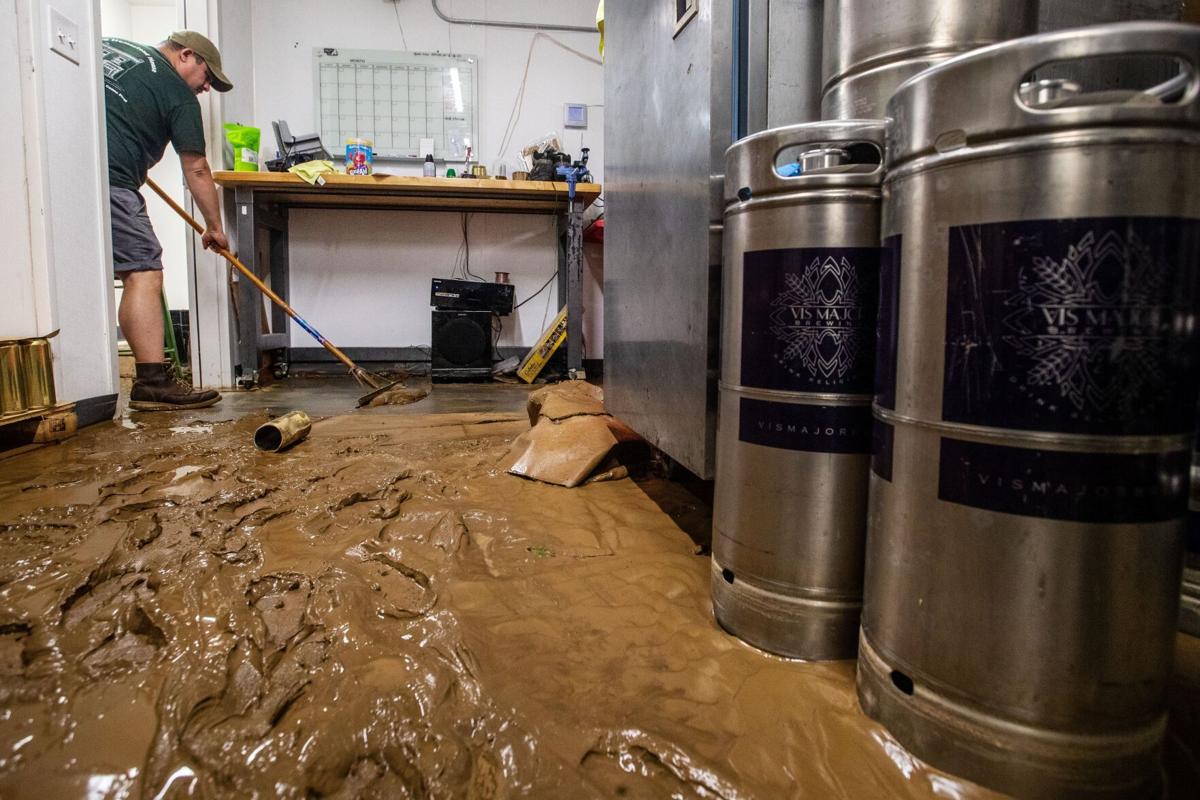 Josh Foo helps clean up the basement of Vis Major, at 35th and Center Streets, on Sunday. The business will need a new foundation. The owner suspects that the sewer line failed. 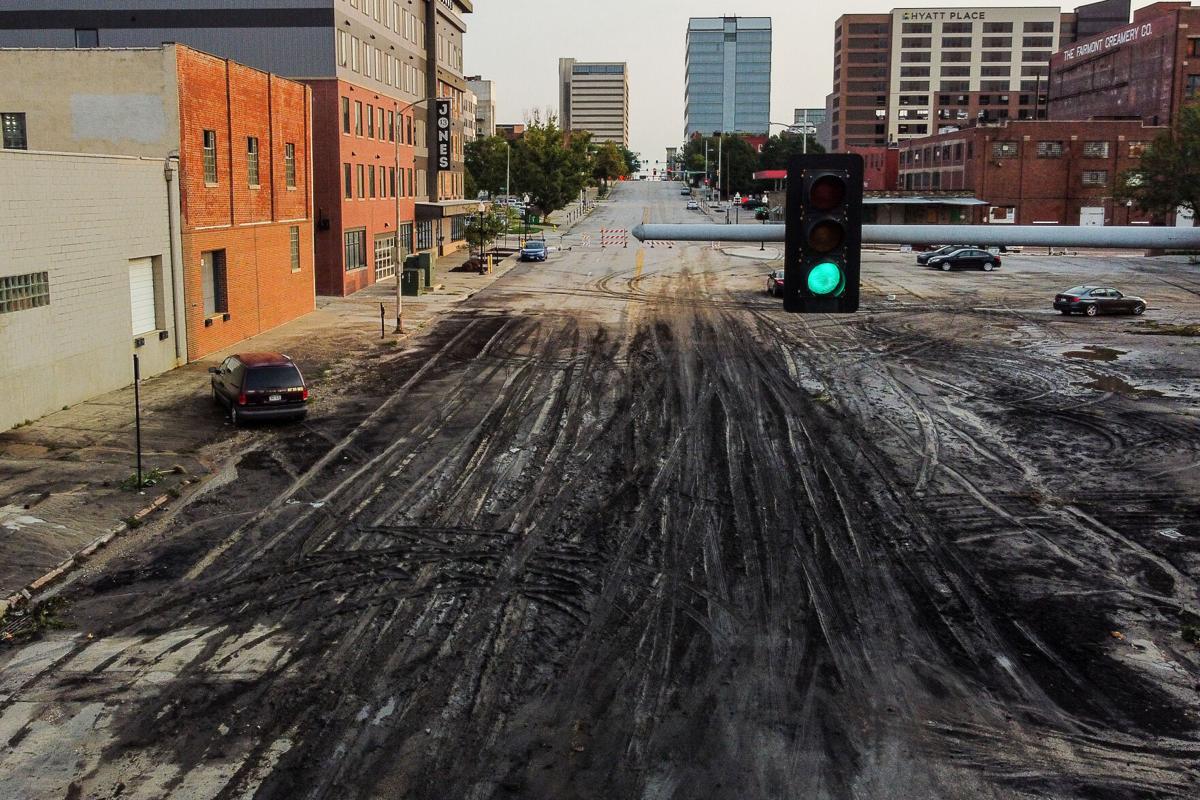 Mud and debris cover the area looking north on 13th Street from Leavenworth Street on Sunday. 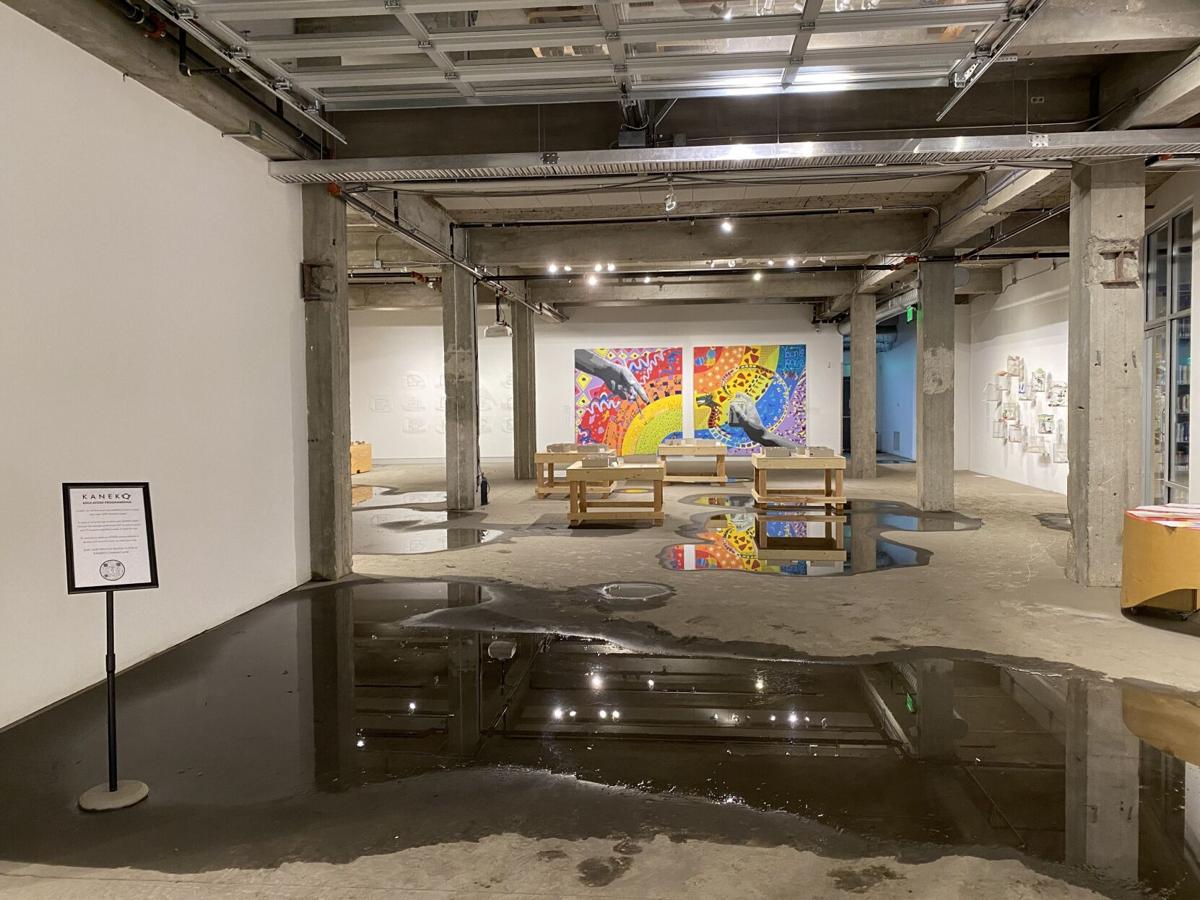 Water on the floor of an exhibit space at Kaneko on Monday. It could be at least a month until the gallery is able to reopen.

City employees and contracted workers were out Monday scraping mud from streets and sidewalks, then loading that muck and other debris into dump trucks. Street-sweeping trucks also were roaming the area to clear dirt and other debris.

Meanwhile, residents and business owners were working with restoration companies to clear water and mud from their properties as they began to assess the scope of the storm. The downpour shocked Omaha Saturday evening, just a month after a historic windstorm.

Some of the city’s aging sewer lines collapsed after becoming over-pressurized because of the massive amount of stormwater flowing through them, Steve Andersen, manager of sewer maintenance with the Public Works Department, said at a Monday press conference.

Some of the affected sewers were as much as 30 feet below ground and more than 100 years old and will require “significant work,” he said.

The city had confirmed one sewer collapse Monday afternoon and suspected at least a few more, Andersen said. Inspections were to continue in the coming days. In other areas, manhole covers were blown from the street by the pressure.

Most of the damage occurred east of 50th Street between Dodge and Martha Streets, Andersen said. Conditions were particularly bad in the area of Jones and Leavenworth Streets on the southern end of the Old Market — an area Andersen called a “valley” to which gravity naturally pulls running water.

Some motorists who were driving in the area Saturday night found themselves trapped in vehicles, surrounded by floodwaters. The Omaha Fire Department said Monday that firefighters responded to 15 water rescue calls during the storm.

Andersen said the Jones-Leavenworth corridor saw almost 4 inches of rain per hour during the height of the storm, an event he called “somewhere between a 100-year and 200-year occurrence.” Officially, Omaha recorded 2.02 inches of rain at Eppley Airfield.

Todd Pfitzer, the city engineer, said Omaha’s sewer system is designed to handle up to a 100-year storm without problems. The intense rain, in a lower-lying area of Omaha, was the “worst place” for the storm to be the most intense, Andersen said.

“When an event like this happens, it puts a massive amount of stress on our aging infrastructure,” Pfitzer said. “So if there’s a weak spot, it’s going to find it.”

The lower level of an Old Market parking garage near 11th and Jones Streets was closed Monday as the city worked to clear out about 50 vehicles that were parked there during the storm and sustained heavy damage. The vehicles were likely totaled, Pfitzer said.

Access to another parking garage, between Dodge Street and Interstate 480, also was limited after it sustained damage, including the loss of electronic equipment such as gates and card processing equipment, Pfitzer said.

Pfitzer said the city is exploring whether the storm met the threshold to qualify for federal disaster funding.

The city also was working with homeowners who still had water in their basements to ensure that future sewer backlogs do not occur.

Jeff Moore, a State Farm insurance agent whose office is near 48th and Center Streets, said it’s unlikely that homeowners with water damage from the flooding will be covered under their homeowners' insurance because surface water — water that enters a home from the ground — typically isn’t covered in such policies, in part because of how often basements take in water.

“We’d be (approving) an ungodly amount of claims,” he said, “and the prices (of insurance) would be higher than what they are now.”

Instead, homeowners who want to be protected against flash flooding need to buy federal flood insurance. The cost of flood insurance is tailored to the individual’s risk, according to the Federal Emergency Management Agency.

Federal flood insurance, purchased through your local insurance agent, covers several types of damage, as long as it comes from overland flooding: a sewage backup, a collapsed foundation, damaged drywall and lost furnaces, according to FEMA. But flood insurance does not cover seepage or groundwater flooding.

Floods can be extremely costly. Just an inch of water can cause $25,000 in damage to a building, according to FEMA.

The weekend's flash flooding sent several inches of water into exhibit spaces throughout the Kaneko art gallery, prompting staffers to relocate pieces — but no artwork was damaged.

Vis Major craft brewery is among several area business suffered damage in Saturday's drenching storm and subsequent flooding. It is anticipated to be temporarily closed for a couple of months.

Omaha officials expect to apply for federal disaster aid after flash flooding over the weekend.

Editorial: Omaha must better prepare its infrastructure to withstand the climate threat

Climate analyses warn of our region's increased vulnerability of high-intensity weather events — such as the extraordinary downpour that just struck Omaha.

They were the twin banes in Omaha’s pioneer years. One of them came back to life during the nighttime deluge that hit the area last weekend.

Residents' problems have been magnified by the fact that homeowners insurance doesn't cover flood losses, and government help is uncertain at best.

Josh Foo helps clean up the basement of Vis Major, at 35th and Center Streets, on Sunday. The business will need a new foundation. The owner suspects that the sewer line failed.

Mud and debris cover the area looking north on 13th Street from Leavenworth Street on Sunday.

Water on the floor of an exhibit space at Kaneko on Monday. It could be at least a month until the gallery is able to reopen.