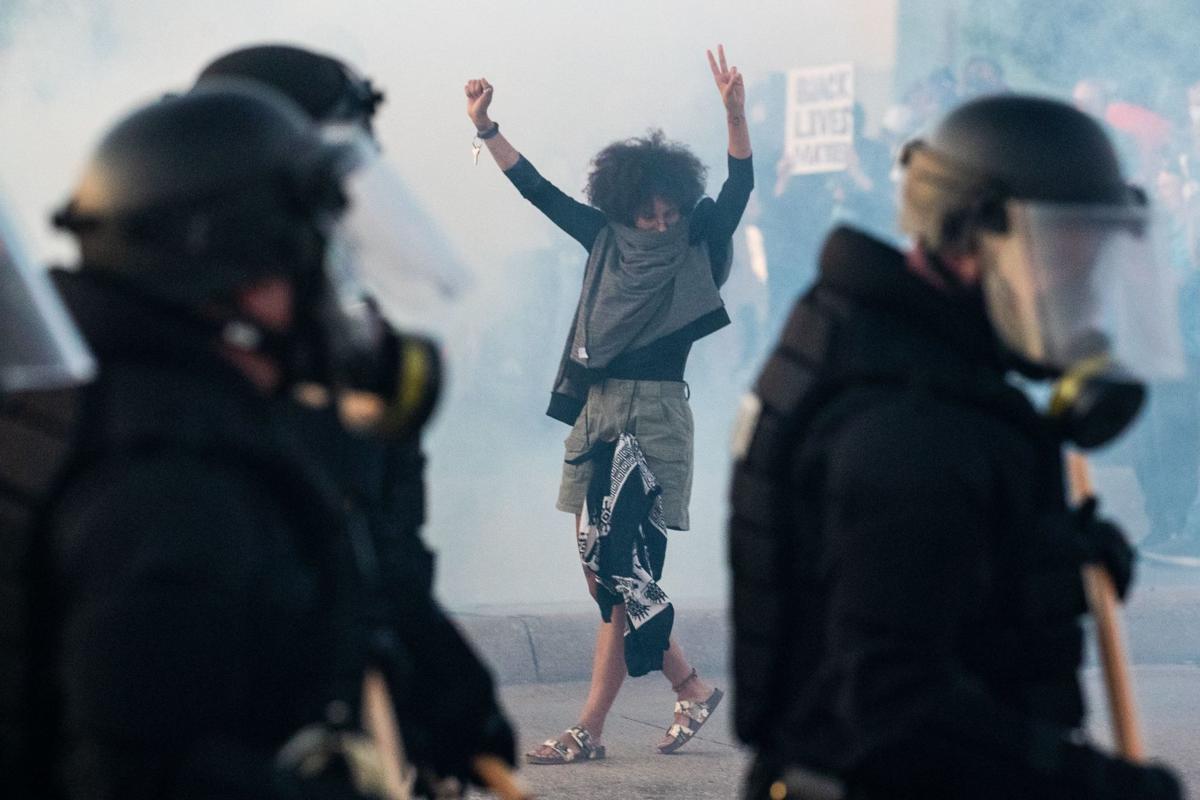 Kyra Parker flashes the peace sign while walking backwards in a cloud of tear gas during a protest at 72nd and Dodge Streets on Friday. People were protesting the death of George Floyd at the hands of Minneapolis police. 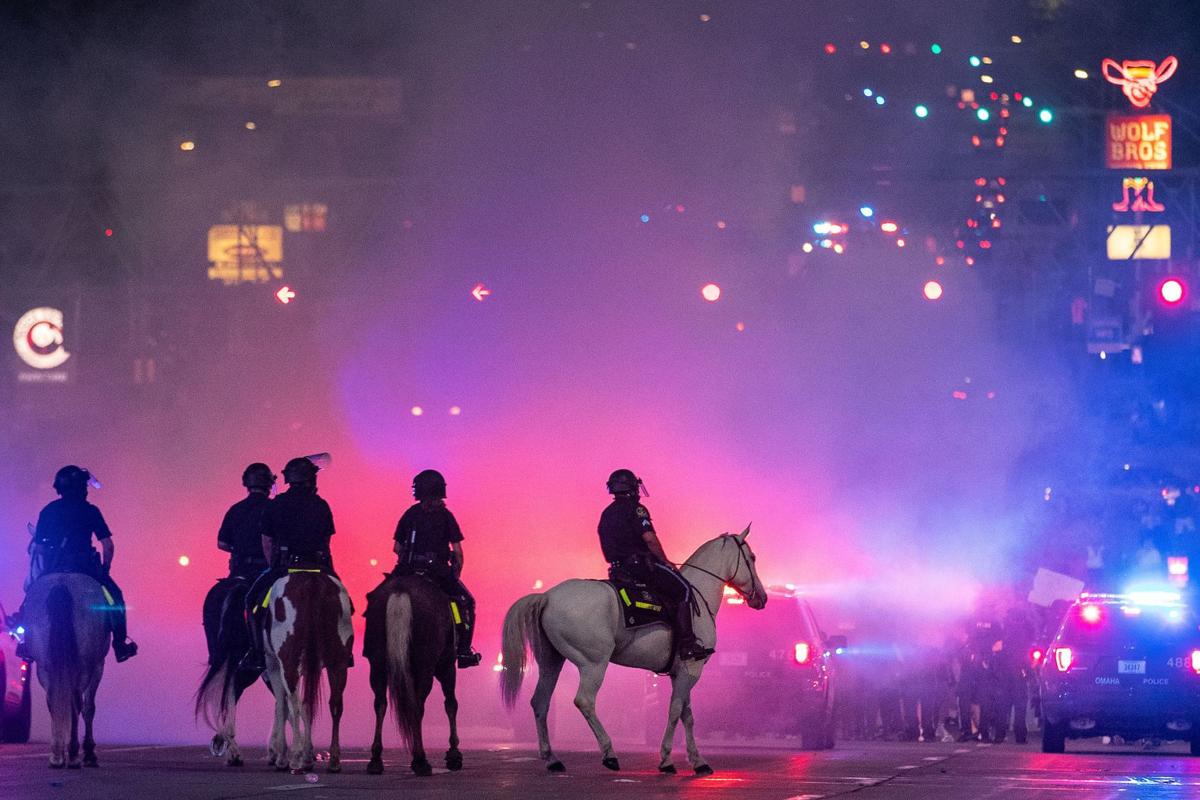 The Omaha police mounted patrol are silhouetted in tear gas as they approach protesters at 72nd and Dodge Streets on Friday, May 29, 2020. People were protesting the death of George Floyd at the hands of Minneapolis police. 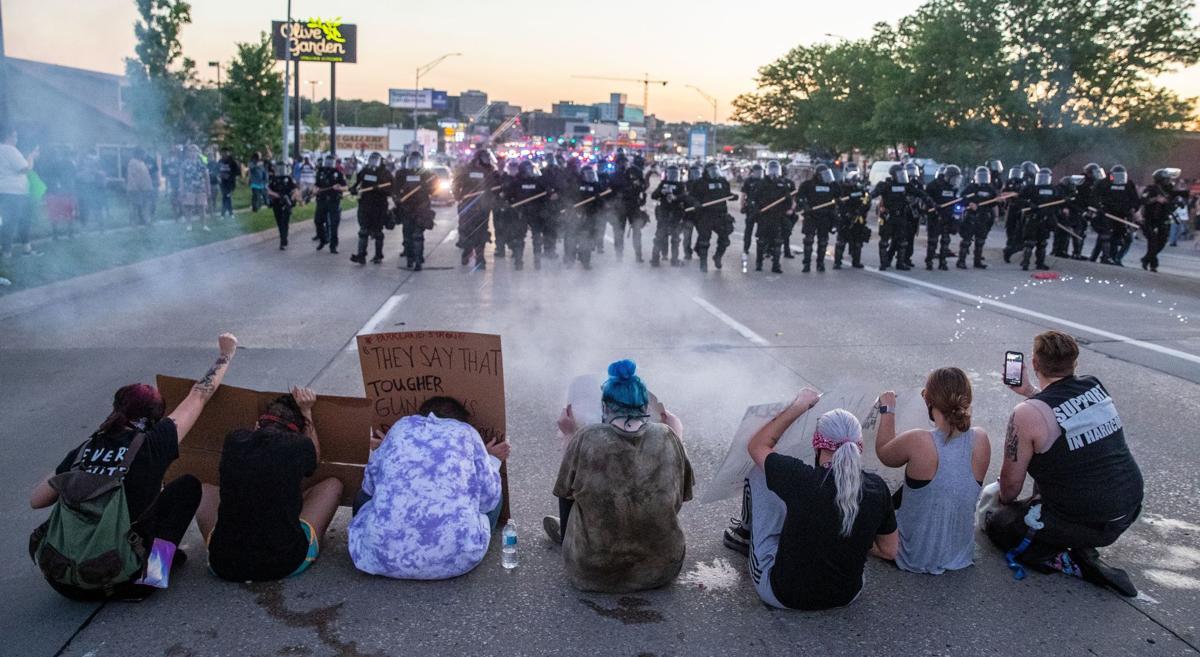 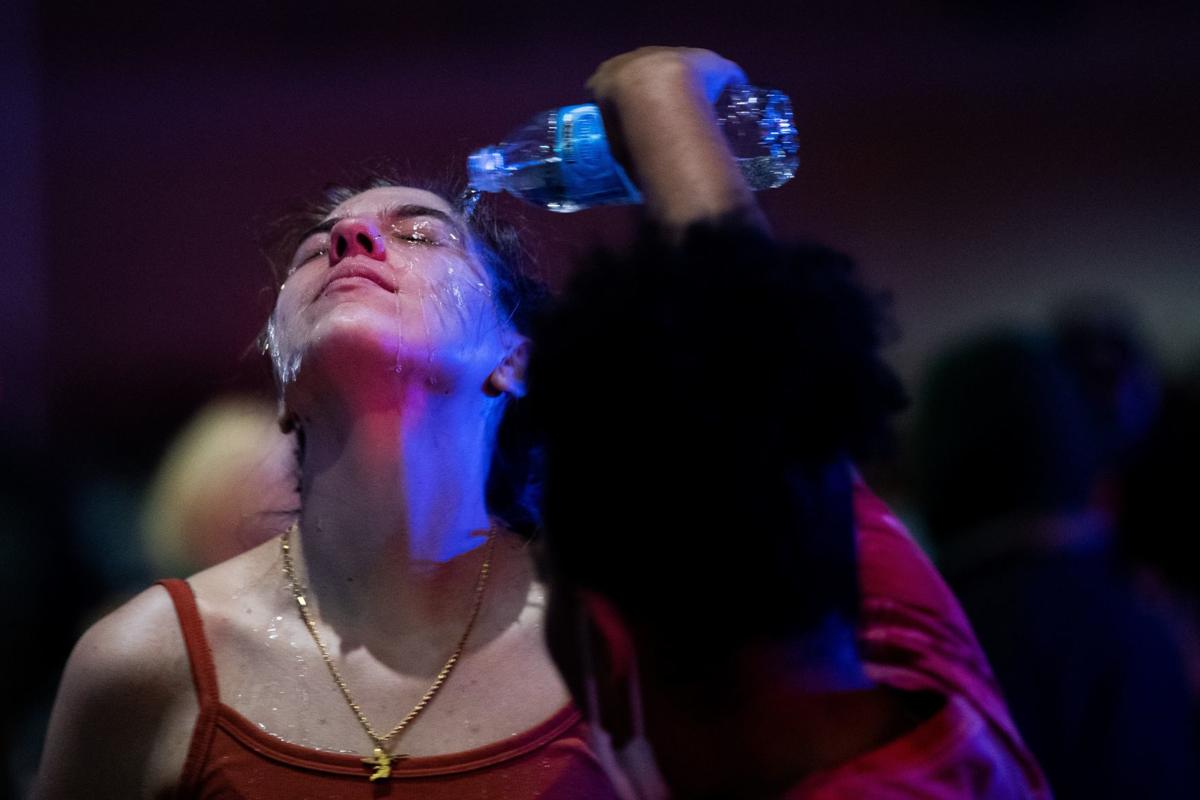 A woman has water poured over her eyes after being hit with tear gas Friday night during a rally in near 72nd and Dodge Streets. 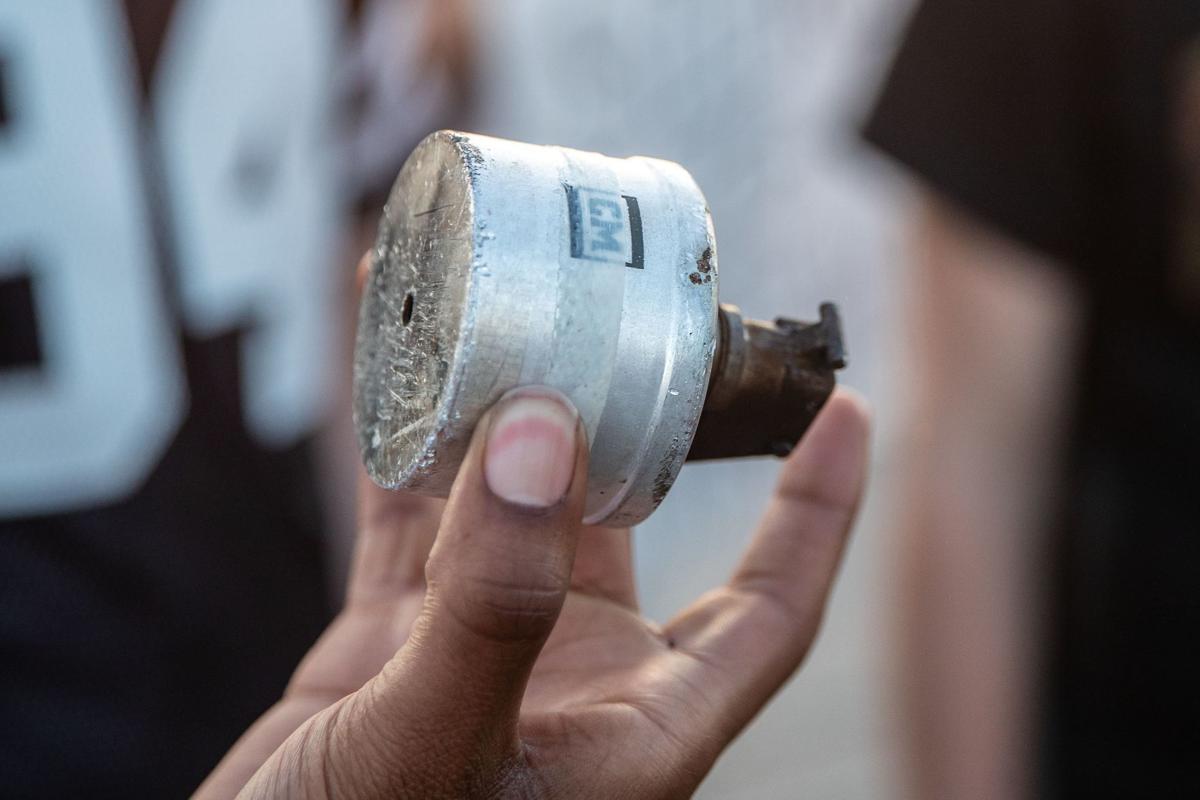 A protester in the 72nd and Dodge Streets area holds what appears to be a tear gas container on Friday. People were protesting the death of George Floyd in Minneapolis.

Stinging tear gas and screaming protesters swirled around me for two nights as anger over the death of George Floyd spilled out onto Omaha streets.

I watched a 16-year-old girl cry after she was knocked down by officers. I saw protesters grimacing on the ground after being hit with tear gas and pepper balls. I saw protesters break windows and hurl projectiles and insults at police.

And I stood yards away from my downtown apartment building and watched as a shooting victim strapped on a gurney was wheeled away by Omaha firefighters, with a crowd of protesters screaming and crying as police officers worked to clear a path for medics. Then another gunshot rang out further up the street.

“Get down, they’re shooting,” an officer said.

What began as a peaceful demonstration on one of the city’s busiest intersections on Friday devolved into chaos that continued Saturday night into Sunday morning, and spread into downtown Omaha.

When I arrived a little after 6 p.m. Friday at 72nd and Dodge Streets, hundreds of people were gathered on all four corners of the intersection. They waved signs and cheered as cars honked in support.

Patricia Bridgeman’s voice could be heard over the others.

“No justice, no peace!” she shouted.

“I’m out here, I’m black and in my heart I know I’m supposed to be here, cheering with everyone else,” Bridgeman said. “There’s all different shades, sizes, colors, all beautiful people out here.”

With much traffic diverted, a protester placed a bouquet of flowers with a cardboard sign that read “George Floyd” in the middle of the 72nd and Dodge intersection just before 8 p.m.. The flowers would be trampled minutes later as more protesters quickly took to the street.

Brianna Full and her boyfriend, Jesse Campos, unloaded boxes of water and Gatorade from a van near the protest. The couple had gathered donations from the community for the purchase.

“Black and brown people are dying every day and it’s unacceptable,” Full said.

As the protest continued Friday evening, the situation became more tense. By 8:15 p.m., tear gas had been deployed and police lined Dodge Street in riot gear. At least two people were taken down by officers.

By 10:30 p.m., graffiti had been spray painted on the Target store near 72nd and Dodge, and one of the glass doors had been broken. More than 20 police officers stood in front of the store, and police worked to clear protesters from the parking lot, telling them to leave or be arrested. They took down and handcuffed at least three people.

One man entered the greenhouse area in the corner of the parking lot and began smashing clay pots. He was soon stopped by fellow protesters.

Saturday’s protest began much the same as Friday’s. Protesters stood at the northwest corner of 72nd and Dodge. They chanted and held signs. Omaha police blocked off the street and placed blockades on the medians. Things escalated quickly.

By 8:15 p.m., officers were rapidly firing tear gas canisters, a tactic they continued as protesters were driven out of the Target parking lot and west along Dodge. While protesters soon dispersed, many headed downtown.

I did, too, heading back to my apartment in the Old Market to wash the tear gas off my face. But as I did, I heard reports of a large group gathering at the Omaha Police Department’s downtown headquarters. I attempted to make my way there at 10 p.m., but was stopped a few blocks away as the protesters clashed with officers. The tear gas was so thick I knelt on the sidewalk, retching.

Then came the fatal shooting nearby — and the sound of shots fired elsewhere.

I retreated into my apartment building and watched as a helicopter aimed a spotlight on a group of protesters on the corner of 14th and Harney. I heard the sound of flash bang grenades blocks away and the ringing of security alarms as protesters broke the windows of businesses.

By 1 a.m. Sunday, I was ready to turn off my police scanner and end my shift. But I still could hear the alarms that kept ringing, a helicopter as it continued to circle the Old Market and the distant shouting of protesters.

Photos: Second day of protest leads to damage in Omaha

Police chief says Friday night protest could have been worse, but 'turned out to be OK'

Top officials say positive relationships the police department has worked to garner with the community for years are still intact.

Gov. Pete Ricketts condemned the vandalism and violence in Lincoln and Omaha after protests turned to unrest overnight. The governor also praised "the significant majority of protesters who were peaceful."

Fred Hoiberg calls situation in Minneapolis, where he used to play and live, 'heartbreaking'

Curfew begins in Omaha after Stothert declares state of emergency

Omaha’s state of emergency will last 72 hours, and the curfew will go from 8 p.m. to 6 a.m. Sunday, Monday and Tuesday nights. Omaha Mayor Jean Stothert could extend it with Omaha City Council approval. The curfew doesn’t apply to people going to and from work, medical personnel, the press, the homeless and some others.

For people who’d lived in Lincoln just a few years — or all their lives — they’d never seen anything quite like what happened late Saturday into early Sunday, many hours after a peaceful protest — that had wended its way through Lincoln — turned into a spree of vandalism.

Omaha City Council votes to extend city's state of emergency, which could lead to extended curfews

Whether Stothert will choose to issue a curfew for the coming nights was expected to depend partly on how protests played out Tuesday. By the 8 p.m. curfew, a smaller group of protesters outside the Douglas County Courthouse had dispersed.

Kyra Parker flashes the peace sign while walking backwards in a cloud of tear gas during a protest at 72nd and Dodge Streets on Friday. People were protesting the death of George Floyd at the hands of Minneapolis police.

The Omaha police mounted patrol are silhouetted in tear gas as they approach protesters at 72nd and Dodge Streets on Friday, May 29, 2020. People were protesting the death of George Floyd at the hands of Minneapolis police.

A woman has water poured over her eyes after being hit with tear gas Friday night during a rally in near 72nd and Dodge Streets.

A protester in the 72nd and Dodge Streets area holds what appears to be a tear gas container on Friday. People were protesting the death of George Floyd in Minneapolis. 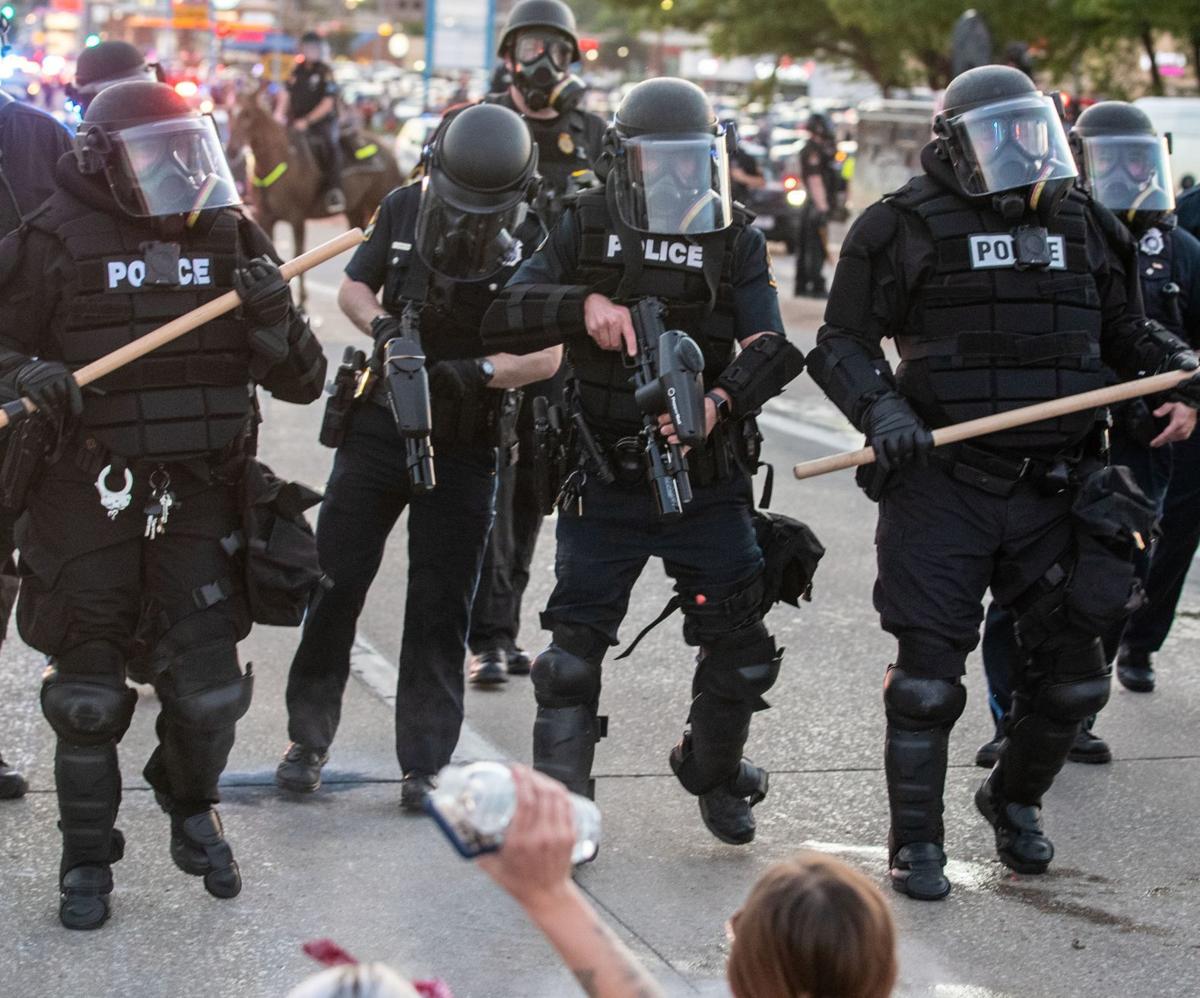 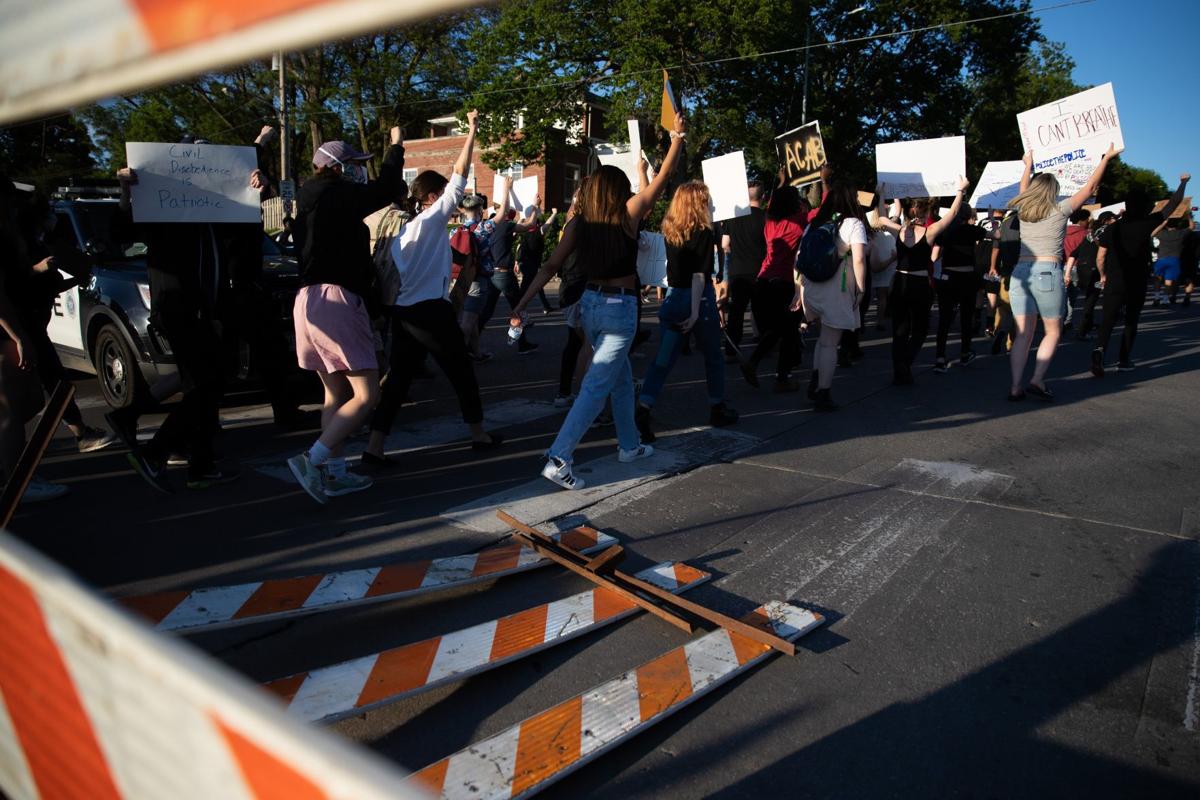 Protesters walk through a barricade to rally in response to the killing of George Floyd.