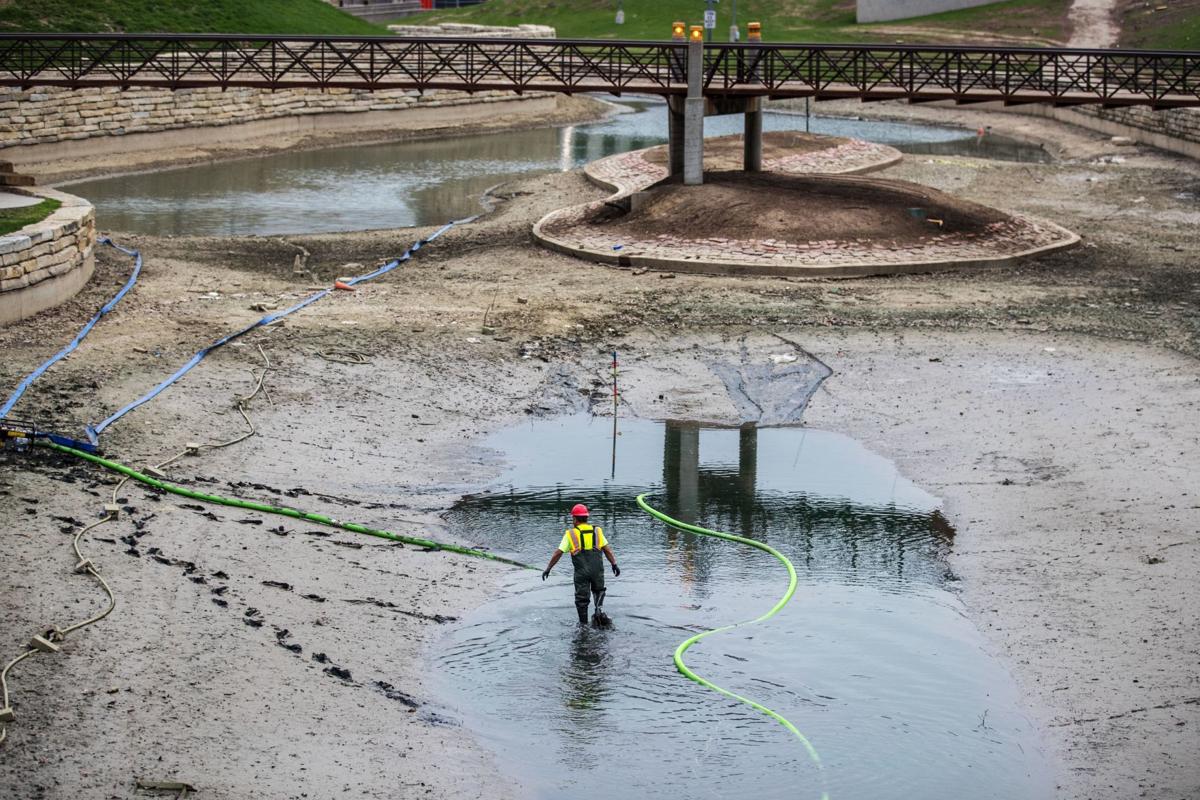 A worker places a hose in the remaining water in the Gene Leahy Mall. 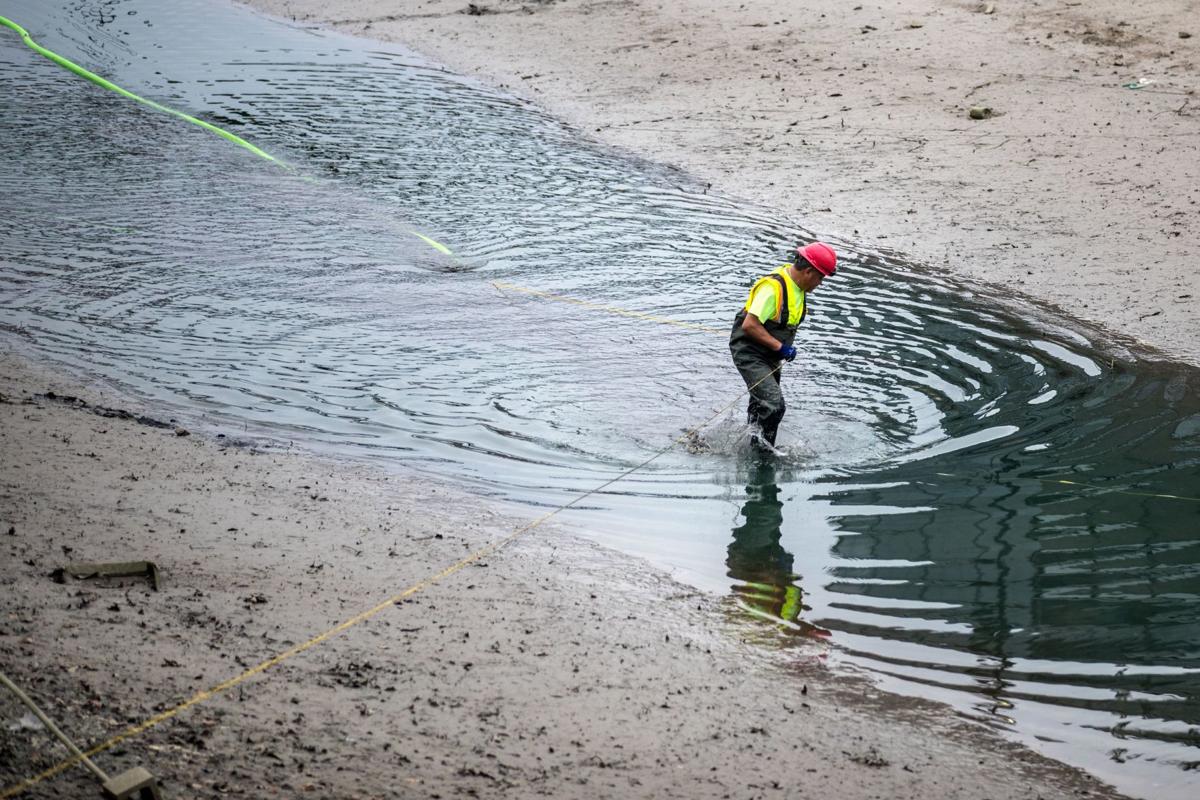 A worker places a hose in the remaining water in the Gene Leahy Mall as the renovation work ramps up on Wednesday. 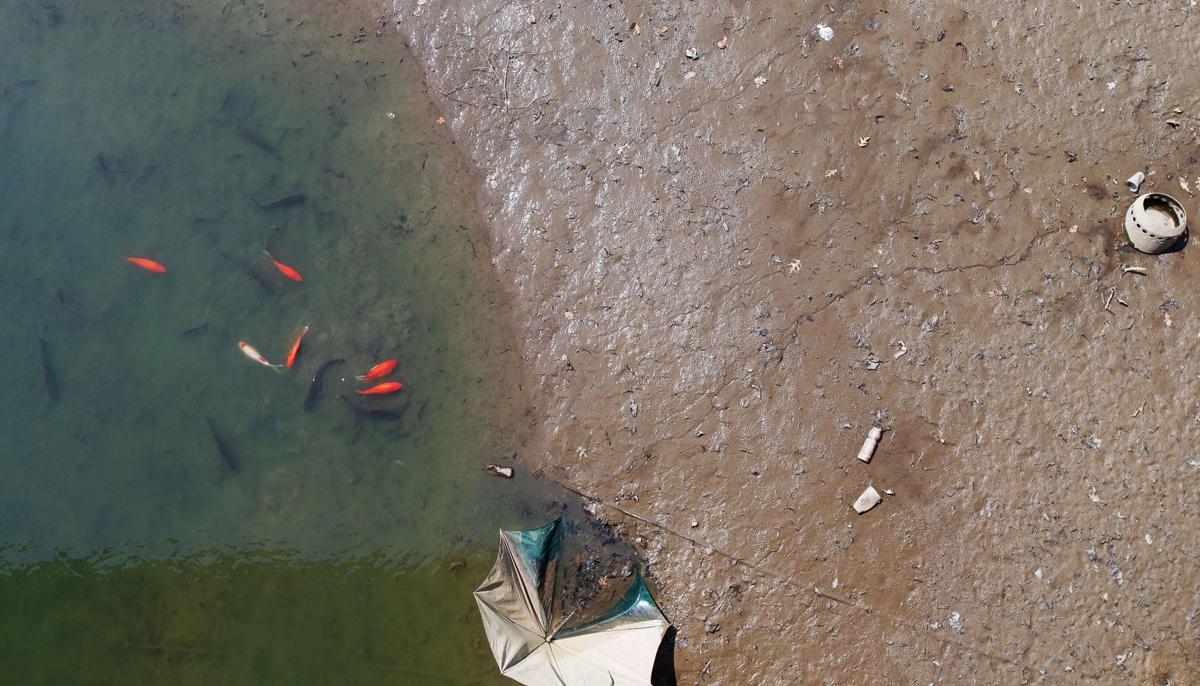 Fish gather in a corner of the remaining water in the Gene Leahy Mall on Wednesday in downtown Omaha. 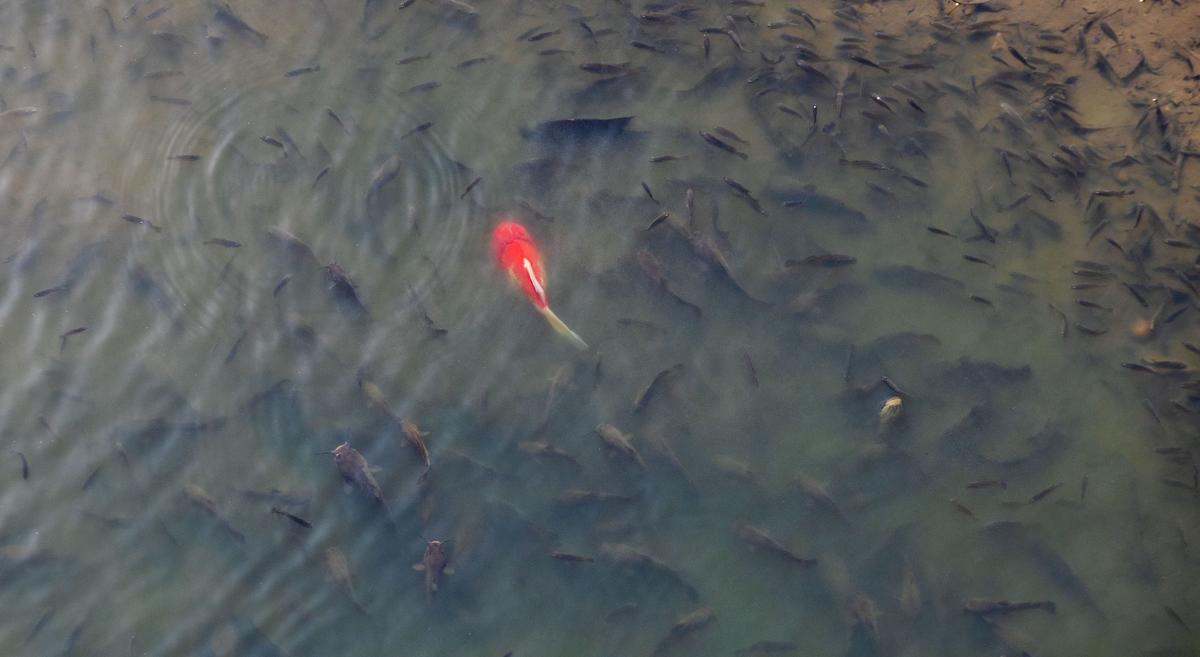 Fish gather in a corner of the remaining water. The lagoon was never stocked, but people likely dumped their fish in it. 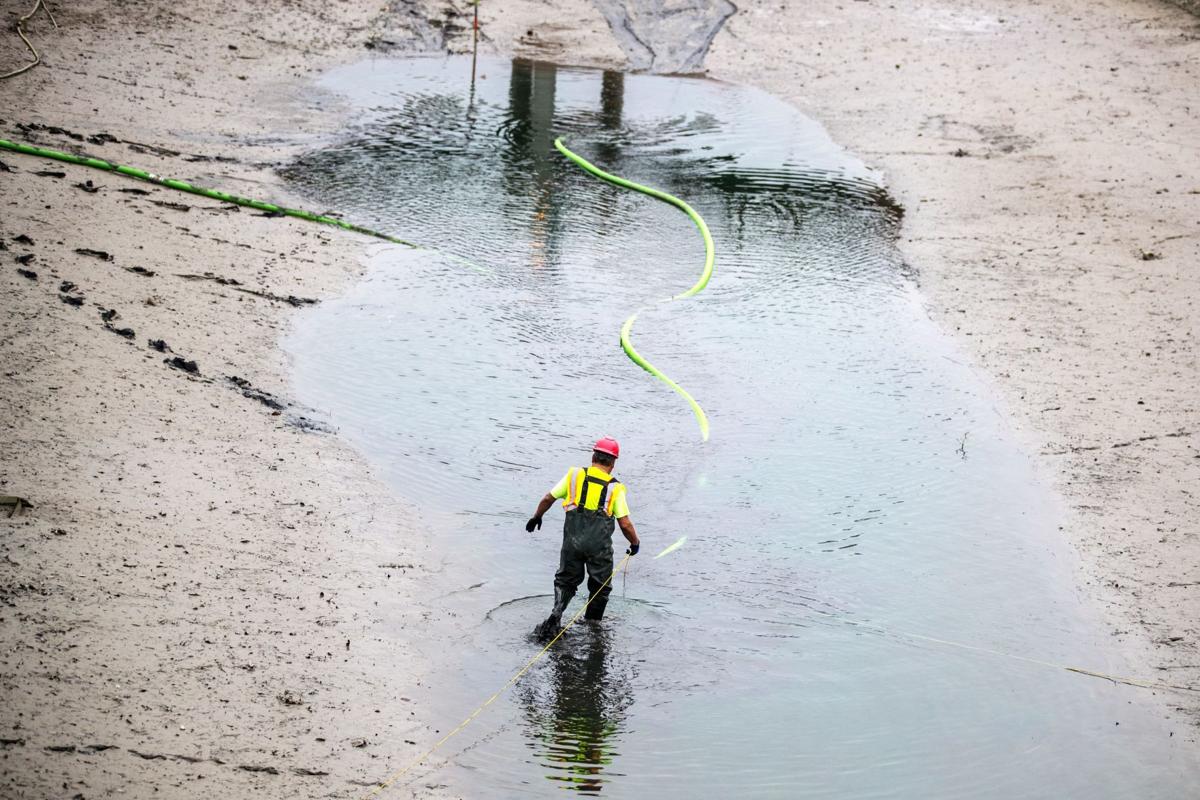 Workers expect to finish pumping the water out of the lagoon next week. The task will cost more than $15,000.

Construction workers plan to pump the last water out of the Gene Leahy Mall lagoon next week, steering it into nearby storm sewers.

The city let gravity drain much of the lagoon’s water this month. Private crews are removing the rest with up to six pumps, at a cost of more than $15,000, Metropolitan Entertainment and Convention Authority officials said.

The pumping has revealed a trove of treasures lost, including children’s toys, a traffic cone, trash and at least two marooned bicycles.

The new view is a change for those used to trees and dark water, where ducks played and people were warned not to swim. Many stopped on the bridges to look because they couldn’t see past the fences at street level.

Midmorning jogger Josh Sauer, 34, described the muddy lagoon’s bottom as “ugly” and “weird.” He said Thursday that he is torn about the renovation. He will miss seeing the water. But he said the additional space to gather and play Frisbee will be nice.

Most of the park’s trees are gone, except a handful that are being preserved. Others had to be cut down before birds moved back in for the spring, the city said. The city is still waiting on a robin, goose and duck nesting on the ground and nearby landscaping.

The birds should not slow construction, the city said. They will leave after their offspring hatch, said city officials, who consulted with the U.S. Fish and Wildlife Service.

“We will be monitoring when they hatch,” said Brook Bench, the city’s parks director. “And we will help them get where they’re going.”

City Parks Department workers have relocated turtles and fish from the lagoon to parks with water, including Heartland of America Park and Levi Carter Park. The city and Kiewit construction crews are relocating any stragglers, MECA said.

Fish were never officially stocked in the Leahy lagoon, but some made their way in, officials said, likely because people dropped them in. Some koi and other carp were still swimming in the lagoon’s shallower pools Wednesday, but six people working for the city and Kiewit are moving as many as they can.

“We aren’t killing anything,” Bench said.

Demolition and grading of the mall will begin in earnest once the lagoon is dry, MECA officials said.

The plan to remake the mall, Heartland of America Park and Lewis & Clark Landing includes bringing the mall to street level. All but about $50 million of the cost will come from private donors, along with a city commitment to spend about $3 million a year on upkeep.

MECA controls the mall during construction, which is expected to be completed by mid- to late 2021, and will also be in charge of maintaining the space after the project.

The group is working with a private company to evaluate what public artwork can and should be moved, said Roger Dixon, MECA’s president and CEO. Among the pieces in the park is the “Heritage” statue of a pioneer family.

Downtown workers and residents will need to be patient while crews demolish and haul off concrete from the park, Dixon said. But the wait will be worth it.

“I’m excited about what the mall will end up being,” he said, adding that it will help connect downtown and the Old Market with the Capitol District.

Best of the weekend: The Gene Leahy Mall is nearly dry; Omaha's 38 essential restaurants — and 6 other can't-miss stories

With Omaha streets pocked with potholes, pointed questions about the city's spending priorities are showing up on Mayor Jean Stothert's Facebook page, on social media and in letters to The World-Herald's Public Pulse.

Crime is down. Housing and mixed-use development are up. Downtown Omaha's reconstruction continues. And help for renters with bad landlords is coming. Those were some highlights Friday from Mayor Jean Stothert's State of the City speech, a recap of the last year at City Hall and a peek ahead.

Kiewit Corp. will oversee construction of the 90-acre plan, and the city will put $3 million of taxpayer funds each year over the next decade toward operating and maintaining the project.

Jean Stothert said she would rather the council pass a non-binding resolution asking retailers to reduce their reliance on single-use plastic bags. "We all care about the environment, but we also must care about the financial impact on businesses and trickle-down costs to customers," she wrote.

Not a single Omaha resident spoke in support of the city awarding the $22.7 million a year contract to Spanish trash conglomerate FCC Environmental. The only people who spoke in favor were the mayor, her Public Works officials and representatives of companies set to make money from the 10-year deal.

Hansen: As the emerald ash borer kills Omaha's trees, this crew is replacing what we lost

Keep Omaha Beautiful's project is planting trees in a way that makes it less likely that we will see a repeat of the ash borer destruction anytime soon — forestry service experts have helped pick out a wide array of trees that are native to the region and also underrepresented in Omaha.

The Omaha City Council will vote Tuesday on a pilot program that would place up to 1,500 smartphone-rented scooters in Omaha through November.

Beginning Tuesday, the southernmost lane of Douglas Street will be closed between 10th and 14th Streets for the next several months.

The downtown lighting display had been in the Gene Leahy Mall for years, but construction in the mall has forced the move.

The closure is because of the Gene Leahy Mall project.

The $290 million project is showing quick progress on its way to transforming Leahy Mall, Heartland of America Park and the Missouri Riverfront.

A worker places a hose in the remaining water in the Gene Leahy Mall.

A worker places a hose in the remaining water in the Gene Leahy Mall as the renovation work ramps up on Wednesday. 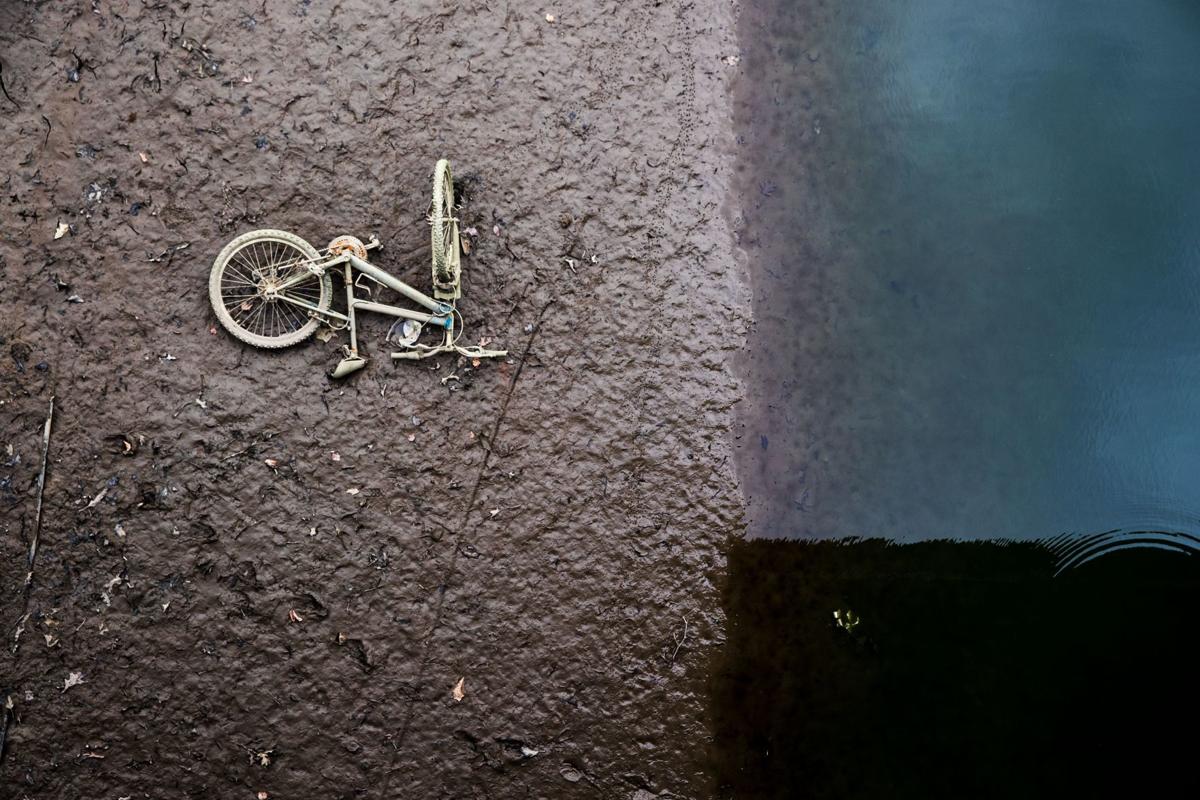 Many items were revealed as the water receded, including this bicycle. The mall will be raised to street level, and that part of the project will be finished in mid- to late 2021.

Fish gather in a corner of the remaining water in the Gene Leahy Mall on Wednesday in downtown Omaha.

Fish gather in a corner of the remaining water. The lagoon was never stocked, but people likely dumped their fish in it.

Workers expect to finish pumping the water out of the lagoon next week. The task will cost more than $15,000.