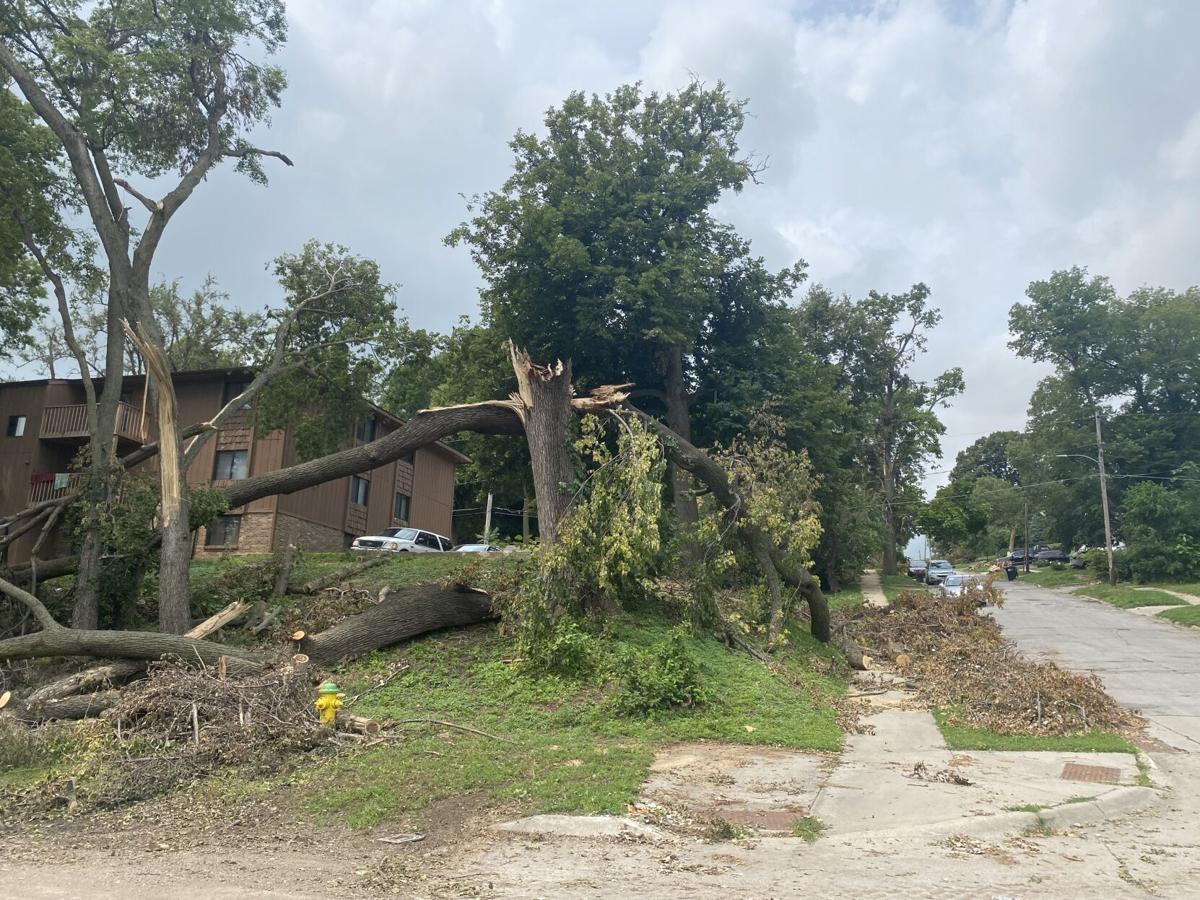 While much of the smaller debris has been placed at curbs for pickup, larger debris like these trees at 31st and Clay Streets will take more time to clear. 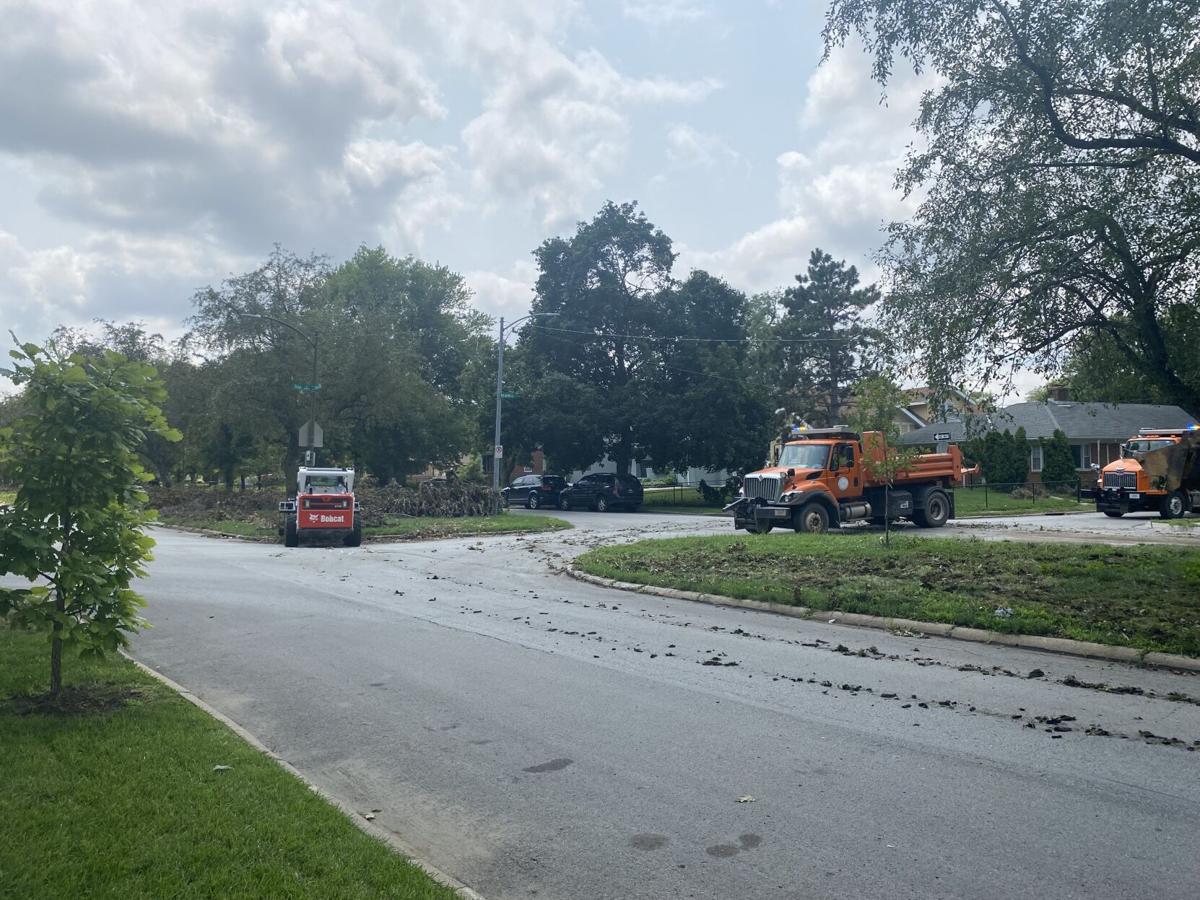 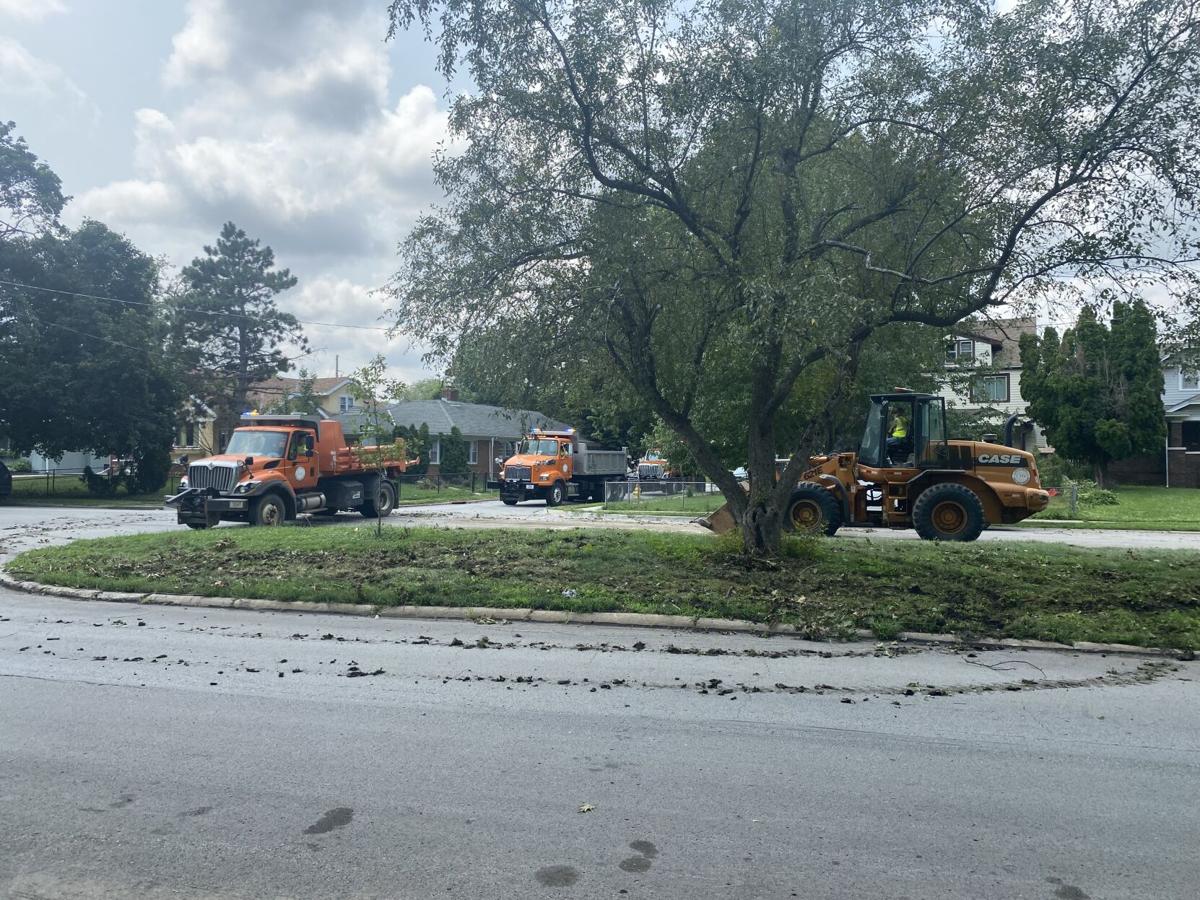 One week after a devastating storm swept through Omaha, many of the fallen tree limbs and branches were at the curb, but frustration with the city’s response remained front of mind for some.

Across multiple neighborhoods Saturday, residents said they felt left behind in the city’s disaster response, even as crews continued clearing boulevards and were gearing up to begin curbside pickup of large debris Monday. Those residents cited poor communication and a slow emergency response as the primary sources of their frustration.

“This is ridiculous,” said Janet Bonet, president of the Spring Lake Park Team community group. “Where was all our help? Every flood, every blizzard, every other storm that’s been citywide gets attention.

“So it was just, I don’t want to say ignorance, and not necessarily complacency, but they dropped the ball in City Hall,” Bonet said. “They didn’t have emergency response preparedness for a disaster like this, and they’re gosh darn lucky that nobody died.”

No deaths or serious injuries were reported after the July 10 storm that pummeled Omaha with 96 mph winds shortly after midnight. The gusts dropped debris, which blocked streets, damaged property and contributed to 188,000 power outages in the Omaha Public Power District service region. OPPD restored power to all affected customers by Friday evening.

In the hours and days after the storm, there was widespread confusion about what to do with debris, said Jen Bauer, president of the Aksarben-Elmwood Park Neighborhood Association. The area, which is home to numerous older trees, was hit exceptionally hard, but based on the city’s initial plan to only open four debris drop-off sites, Bauer said it appeared that city leadership did not grasp the extent of the damage.

One day after the storm, the city said its trash hauler would pick up small debris packed in yard waste bags or bundles no more than 4 feet long and no heavier than 40 pounds. On Tuesday, the city announced that it would also conduct curbside pickup of larger debris.

“It felt like no one actually looked at the damage and just assumed it was branches,” Bauer said. “Then we were told the limbs were ‘too big.’ A lot of bad information was going around.”

During several press briefings, Mayor Jean Stothert asked residents to be flexible. She stressed that the city responded to the storm immediately.

The Mayor’s Office said Saturday that it had provided at least one update per day to local news outlets. The first message went out within hours of the storm. The city also used social media, its mobile app, and text and email messages to inform residents, according to Carrie Murphy, deputy chief of staff/communications for the mayor.

Stothert, who was criticized for attending the U.S. Senior Open last weekend, signed off on an emergency declaration through Douglas County on Wednesday.

Still, some residents said they felt like the initial message from the city was: You’re on your own.

“We don’t ask the city for very much,” said Michelle Jackson-Triplett, president of the Miller Park Minne Lusa Neighborhood Association. “It felt like they kind of blew us off as ‘well, you’ll have to figure out how to help yourselves. Pull yourself up by your bootstraps.’ There were no bootstraps to pull. We had no boots.”

Even amid the frustration, Omahans did rally to help one another.

Trent Hulett, owner of Precision Turf Omaha LLC, parked a dump trailer in his northwest Omaha driveway for people to dispose of debris so they could avoid long lines that developed at the city’s drop-off sites earlier in the week. Hulett didn’t refuse payment offers, but he also didn’t require them.

“I didn’t give anybody a set price, just whatever they thought was fair or reasonable. And then, if they couldn’t pay at all, that didn’t bother me,” he said. “I’m just here to help people out, get the debris out of their yard for them.”

Activity had slowed down by Saturday. Two of the drop-off sites were completely empty, aside from the piles of tree branches. All four sites will remain open until Friday.

The city is also partnering with Team Rubicon, a veteran-led disaster response nonprofit, to help with general debris removal. The elderly and homeowners with disabilities are being prioritized. (Those who need help can call 211 between 8 a.m. and 4 p.m.)

'Everybody pitched in': Omahans help neighbors after record storm

Reflecting on the past week, Bonet said the city’s response did gradually improve.

“They picked it up, but it’s kind of a better late than never attitude right now,” she said. “They really need to rethink their emergency response because, like it or not, climate change is here, and we have to be ready to respond to it.”

Scientists find explanation as to why pandas are so fat

Scientists find explanation as to why pandas are so fat

Avenatti and Stormy Daniels face off in court

Avenatti and Stormy Daniels face off in court

July storms caused more than $30 million in damage in Nebraska

July storms caused more than $30 million in damage in Nebraska and left more than one-third of the state without electrical power, according to the state's congressional delegation.

While much of the smaller debris has been placed at curbs for pickup, larger debris like these trees at 31st and Clay Streets will take more time to clear.