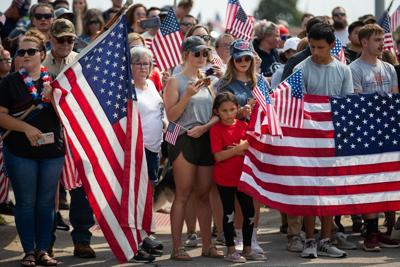 But on Friday afternoon, thousands of Nebraskans and Iowans made Page’s mournful homecoming an occasion to remember.

Holding flags and signs saying “God Bless You, Cpl. Daegan Page” and “Welcome Home,” they lined streets from Eppley Airfield to southwest Omaha to watch the passage of a vehicle carrying the remains of the Marine to Braman Mortuary.

Few of them would have known the name of the 23-year-old Millard South High School graduate before his death Aug. 26 — along with 12 other U.S. service members and at least 169 Afghans — in a terrorist bombing at the Kabul airport in Afghanistan.

But for one day, at least, Daegan Page felt like everyone’s son or brother.

Tim Hullett, a 43-year-old Omahan, cut short a fishing trip to come home and pay tribute, holding up a Marine Corps flag at the corner of 10th and Cass Streets. His own son, Dakota, is a Marine about the same age as Page.

“This could be anybody’s son,” he said.

Page’s homecoming represented a convergence of tragedies. His death came in the final days of America’s War in Afghanistan, while the return of his body to Omaha occurred one day before the 20th anniversary of the terrorist attacks that launched the U.S. into that war.

Page’s casket arrived at Eppley from Dover Air Force Base in Delaware about 1:20 p.m. and was transferred from the aircraft to a hearse out of public view. His family followed in several black SUVs as the procession — escorted by Omaha motorcycle police — traversed the city.

In a statement via email, Page’s family said they were touched by the warm tribute.

“Omaha, you never looked better,” they said. “It was an amazing honor to bring Daegan home to the open arms of his hometown today.

“We wish we could have stopped and thanked every person who took time out of their day to pay their respects,” the family added. “We saw you all.”

More than an hour before the procession, crowds lined Abbott Drive south of the airport and 10th and Cass Streets near the CHI Health Center to pay their respects. Others stood on overpasses above Interstates 480 and 80. More waited along Millard Avenue and 144th Street near the mortuary.

The crowd buzzed along the parade route. People craned their necks around the curve in the road, they jogged across the street to get a better view and they held their flags a little bit higher.

Then the moment came. A brief motorcade, a glimpse of the casket and the family as the hearse rolled by and a stillness from the crowd. Hundreds of people watched silently, their eyes following the procession as it drove under one of the massive U.S. flags hoisted over Abbott Drive by two cranes.

Raegan Hain and Donna Seevers of Seward took their three children out of school so they could learn firsthand about the sacrifices of those who have served during the almost 20 years of war since 9/11.

“Devastated,” added Hain. “These 13 soldiers, who gave up their lives for our freedom. We wanted to show our support.”

Nebraskans tell of relatives' perilous escapes from Afghanistan, fears for those left behind

A Navy sailor and an Air Force airman stationed at Offutt Air Force Base stood near the arena — both in uniform — to honor a fallen Marine who is almost their age.

“It sucks,” said Senior Airman Jacob Counter, 23, of Los Angeles. “But we’re here for him.”

Petty Officer 2nd Class Max Staron, 25, said he was impressed that so many civilians and veterans had come out.

“It’s a nice sign of respect for someone who made this sacrifice so everyone can do what they do, every day,” he said.

Kathy Schmitt of Council Bluffs expressed gratitude for Page’s service and the fact that her own son, a Marine who served in Afghanistan, came home safely.

Bill Williams watched from near the arena as the procession passed.

He caught a glimpse of the flag-draped coffin and stood among the silent crowd.

Williams and his wife, Evonne Williams, helped organize the tribute to Page. The couple have paid tribute to thousands of veterans through their “Remembering Our Fallen” memorial displays and veteran flights to Washington.

It’s the hope of Gold Star families that their loved one isn’t forgotten, Williams said.

“Here we have this incident that brought out such emotion and people to stand on the curb and honor this Marine,” Williams said. “It was a miles-long demonstration of patriotism.”

Amber Pierce, 41, of Council Bluffs wore a T-shirt that said “female veteran” as she watched along 10th Street with her husband, Scott.

The Air Force veteran has a special connection to 9/11. Stationed at Joint Base Andrews near Washington at the time, she was on a team of military medical personnel who rushed to the Pentagon to treat the wounded after an American Airlines jet crashed into the building.

Pierce still recalls the heat from flames. The smell of jet fuel still gives her the chills.

“I guess it was organized chaos,” she said.

She suffered a serious back injury that day while lifting a heavy medical bag. It ended her military career, so Pierce never deployed to a war zone. But on Friday, she wanted to honor a fellow service member who did, and who didn’t come home.

“It makes me feel really good,” she said. “It’s the least we can do, for these men and women who have given their lives.”

At the end of the parade route, the hearse carrying Page’s casket arrived at the mortuary at 2:39 p.m.

A Marine honor guard in dress uniform strode forward to greet Cpl. Page upon his return.

They saluted in unison. Seven Marines led his casket inside.

As he entered, someone broke the hush of the crowd: “Thank you for your service, Cpl. Page!”

The crowd’s silence turned to cheers and claps and whistles.

“Oorah!” The Marine is home.

And the crowd wept.

Before the game, Scott Frost presented a Husker football jersey to the family of fallen Marine Cpl. Daegan Page — the Millard South graduate who was killed in Afghanistan last month.

The 9/11 attacks forced a change in U.S. military operations, speeding up a post-Cold War trend of using Guard and Reserve units much more in real-world and combat situations.

For some Nebraskans, physical distance and the passage of time has not dulled the memories of their experiences in New York City on Sept. 11, 2001, and in its aftermath.

Members of the public are invited to pay their respects to Cpl. Daegan Page this week ahead of the funeral service for the fallen Marine.

Thursday's visitation is open to the public. Friday's funeral isn't, but will be carried online. 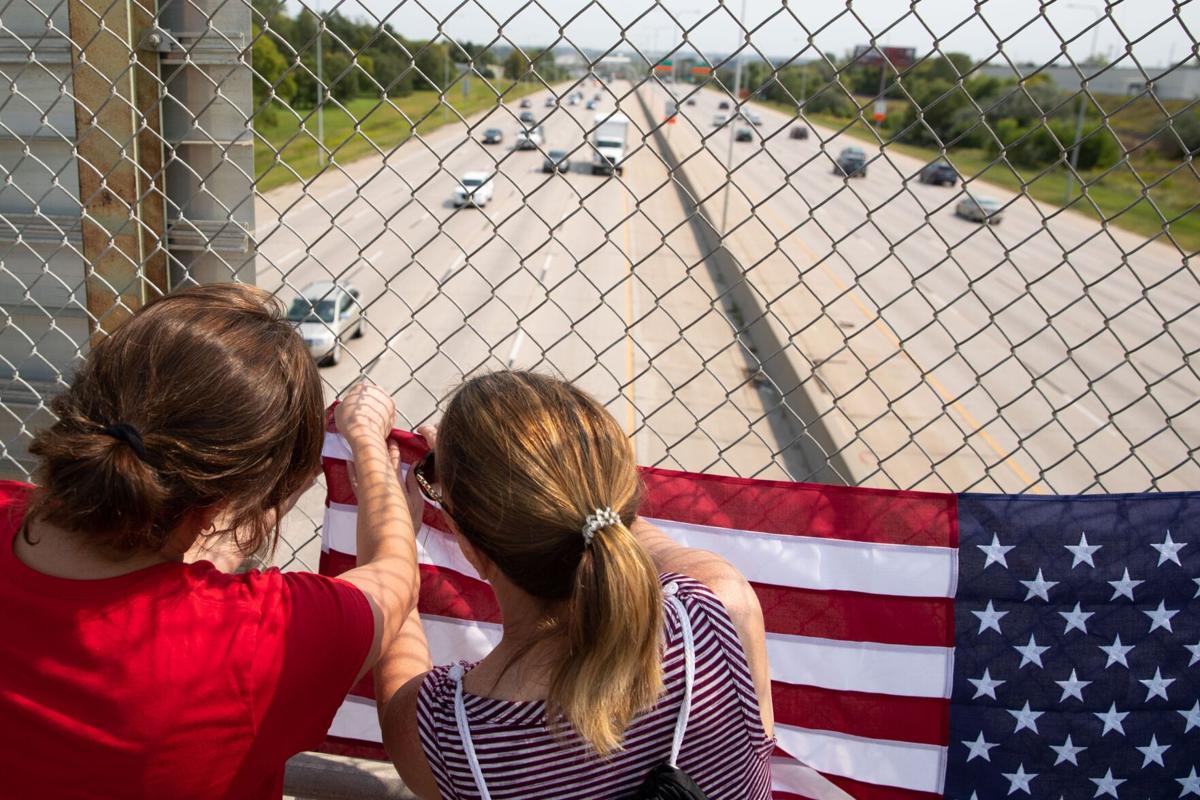 Kris Smith, left, and her sister Kerry Vuagniaux hang an American flag before the procession passes by on the 96th Street bridge. 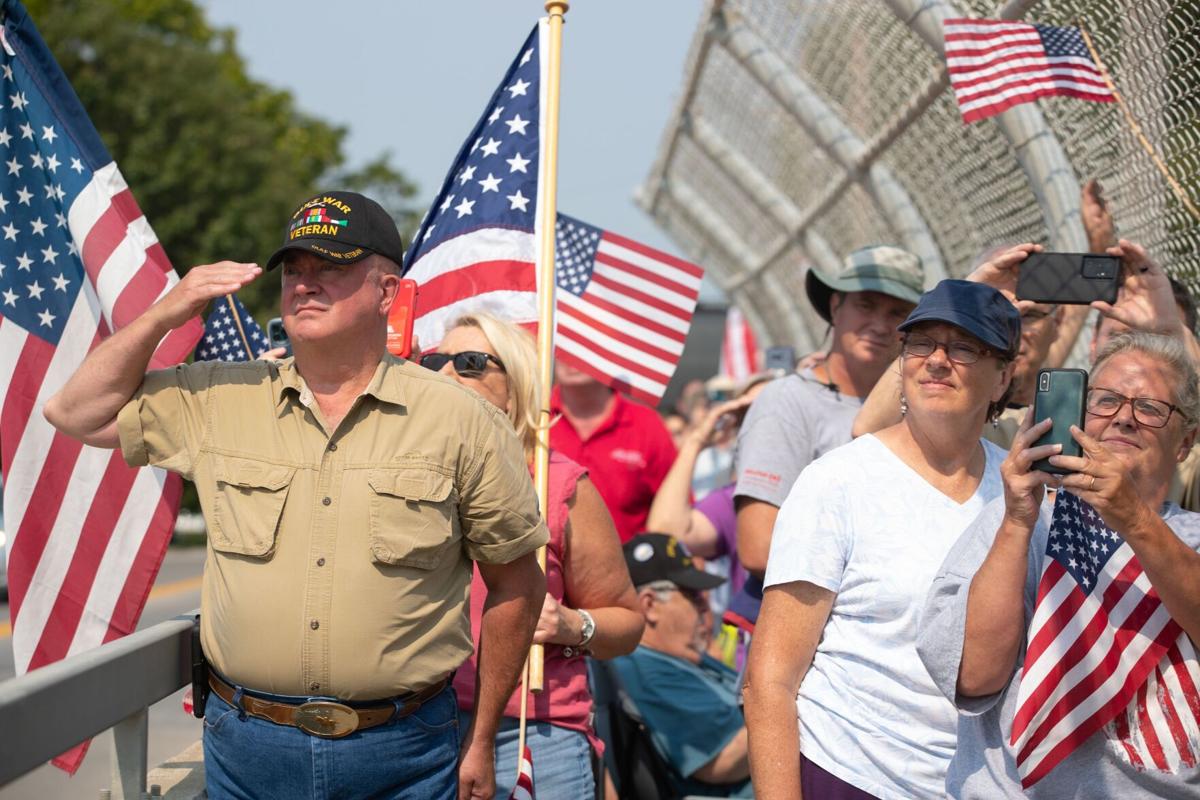 Dean Mathisen, an Army veteran, salutes as Omaha Fire and Police Department officials raise an American flag before Page's procession passes by on the 96th Street bridge over Interstate 80. 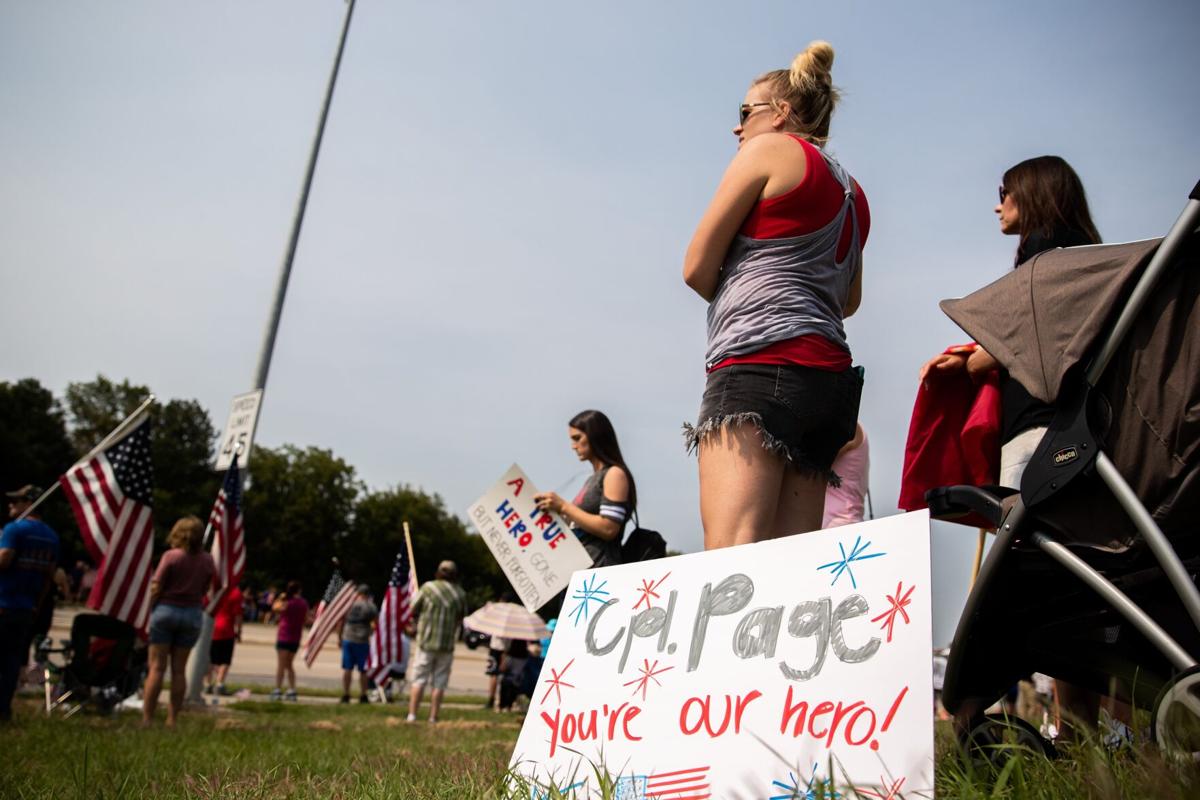 Danielle Bohaty of Omaha waits for the procession near 144th and Madison Streets. 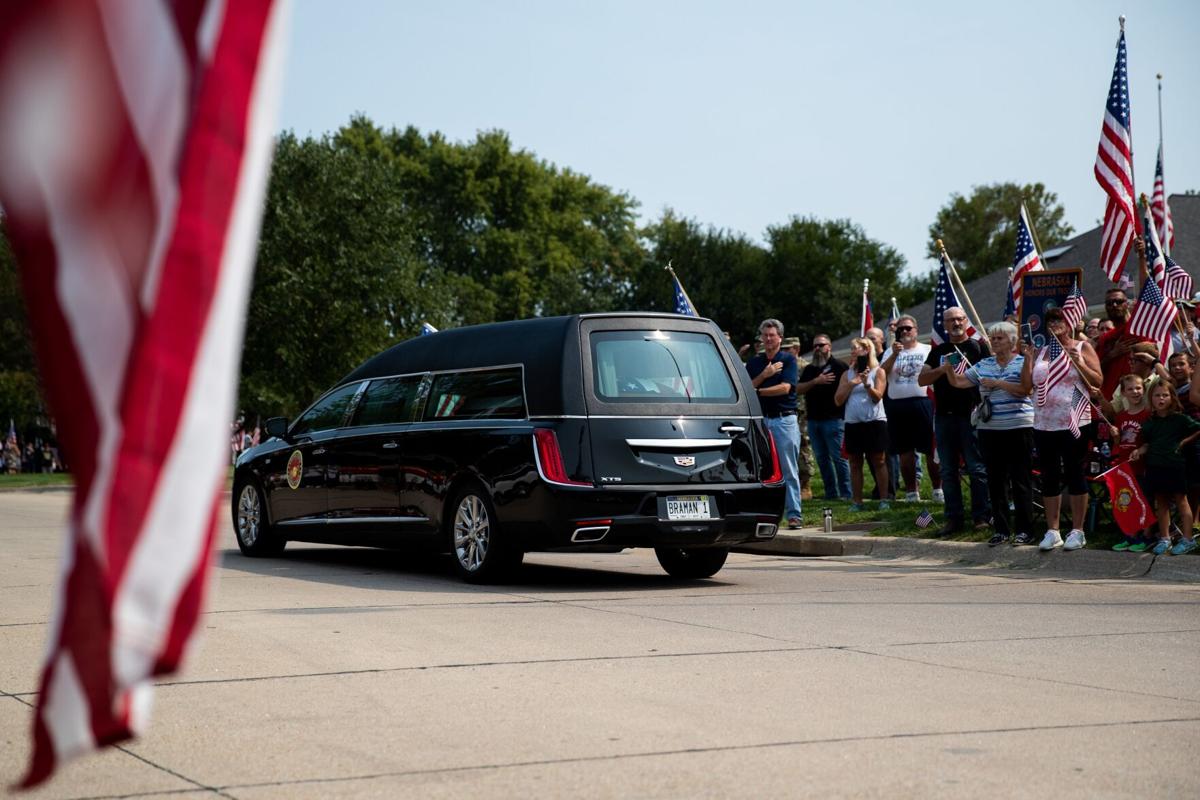 People pay their respects as the hearse carrying the body of Marine Cpl. Daegan Page arrives at Braman Mortuary in southwest Omaha on Friday. Cpl. Page, along with 12 other American service men and women, was killed in a suicide bombing in Afghanistan on Aug. 26. 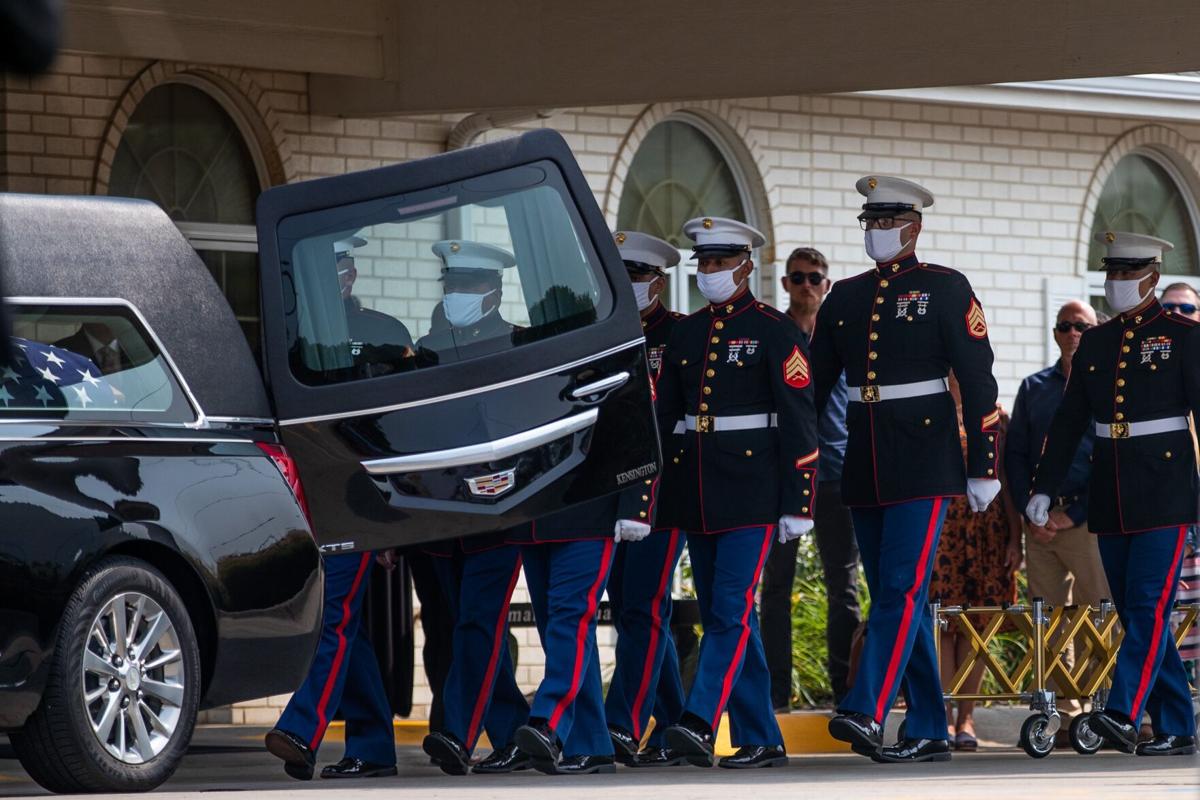 Marines serve as pallbearers for Marine Cpl. Daegan Page at Braman Mortuary on Friday. Page died along with 12 other American service members and at least 169 Afghans in the Aug. 26 suicide bombing. 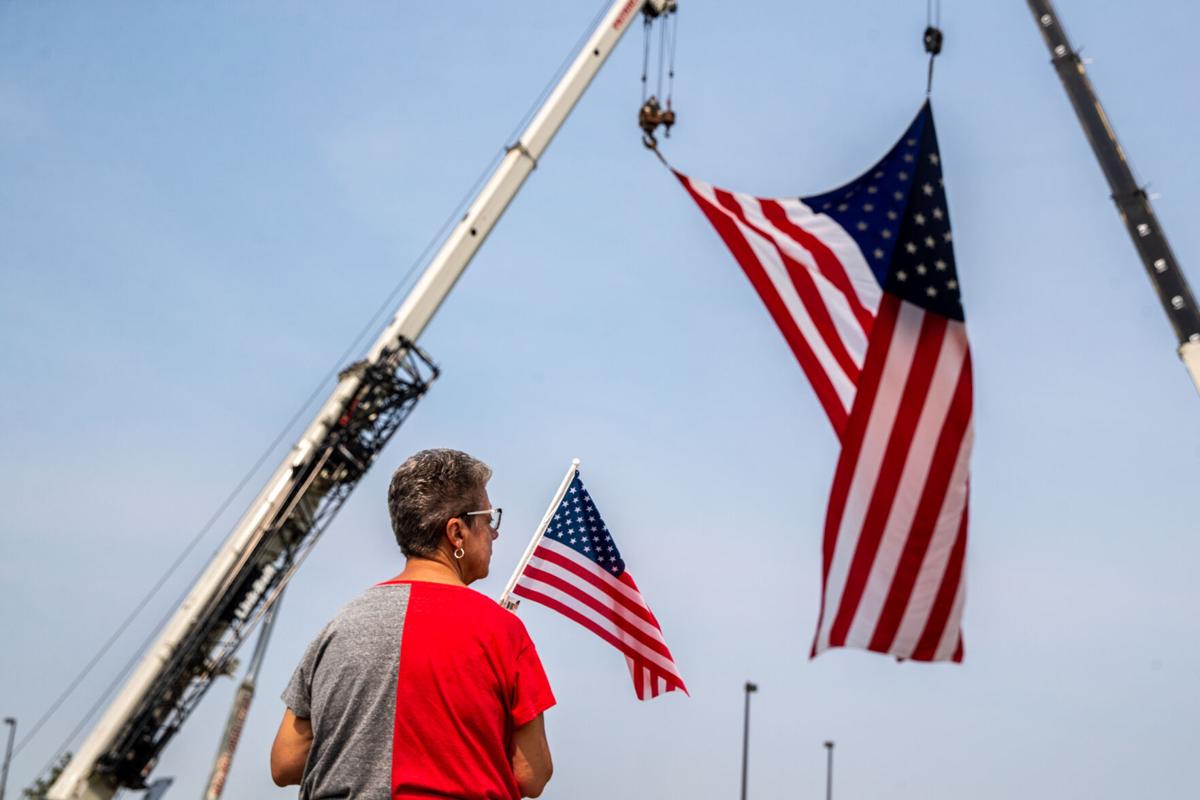 Darlene Weil waits for Page's procession. Weil's grandson, Dylan Weil, is a loadmaster on a C-17 and was helping evacuate people out of Afghanistan. 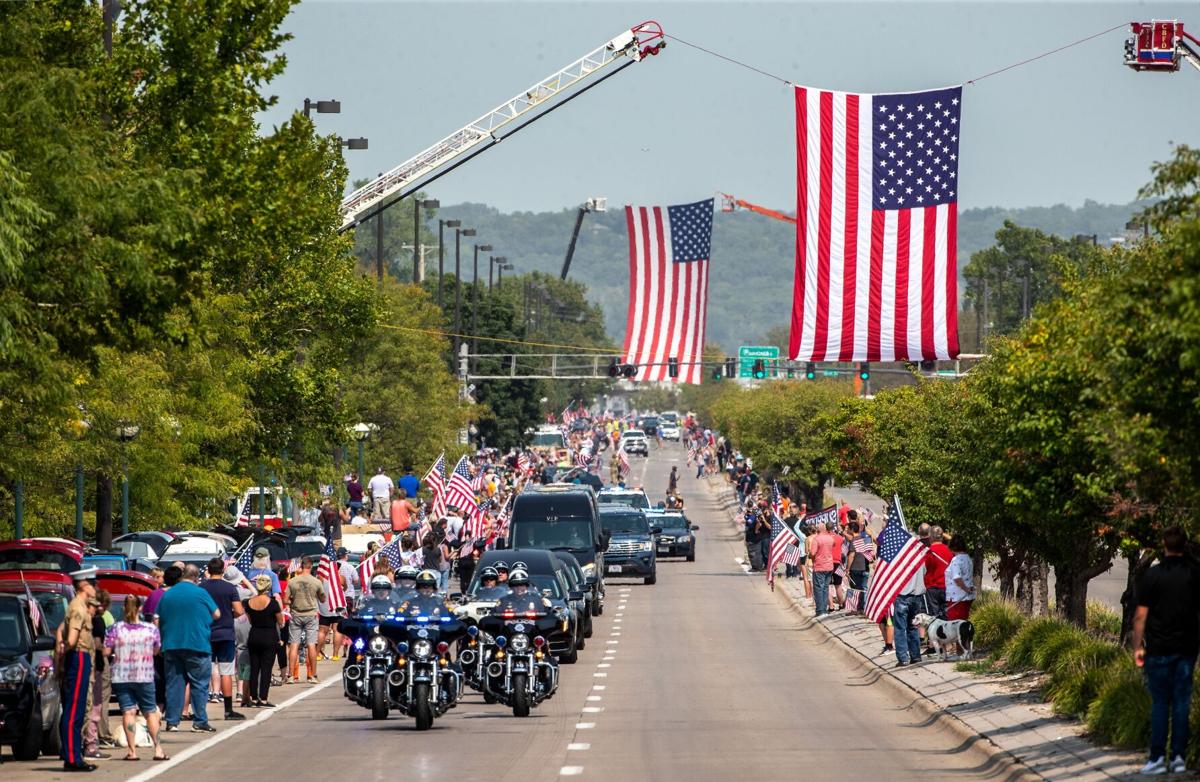 People line Abbott Drive to pay their respects to Cpl. Daegan Page during the procession Friday. Page was killed Aug. 26 in a terrorist bombing at the Kabul airport in Afghanistan