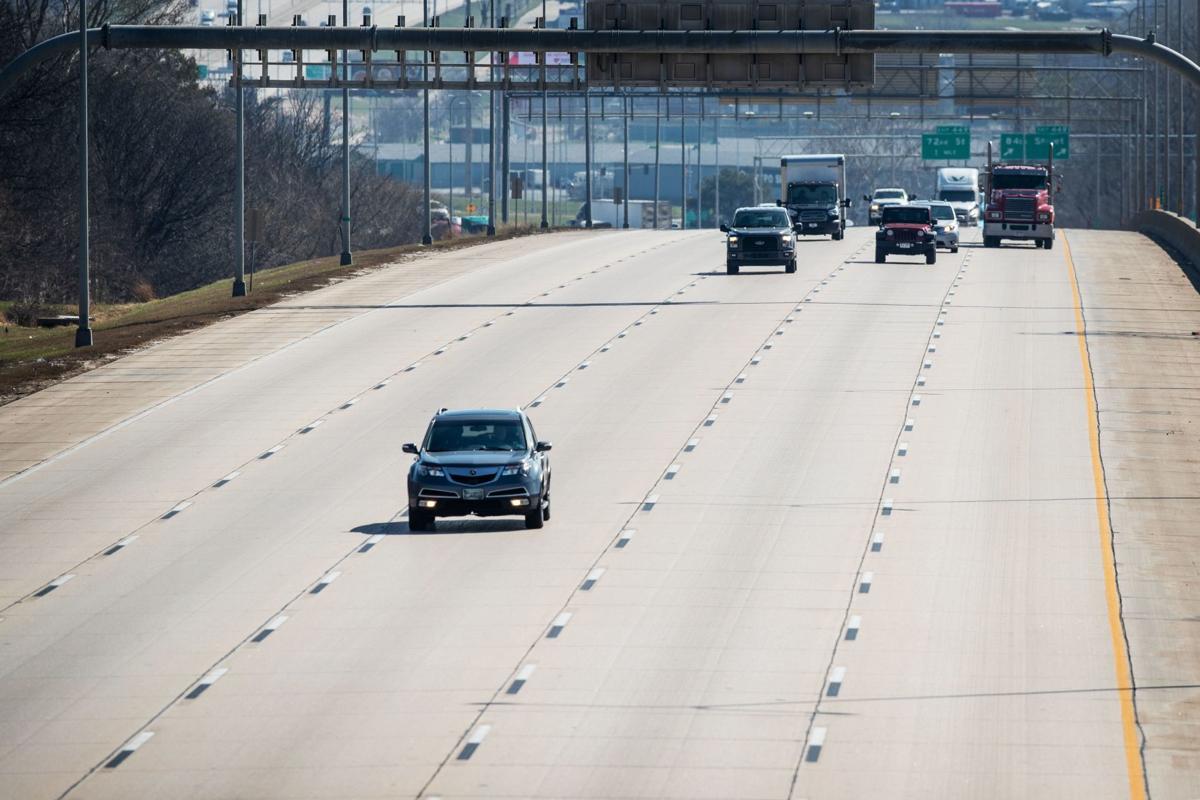 I-80 westbound traffic was light at about 11 a.m. Wednesday, as viewed from the 96th Street bridge. 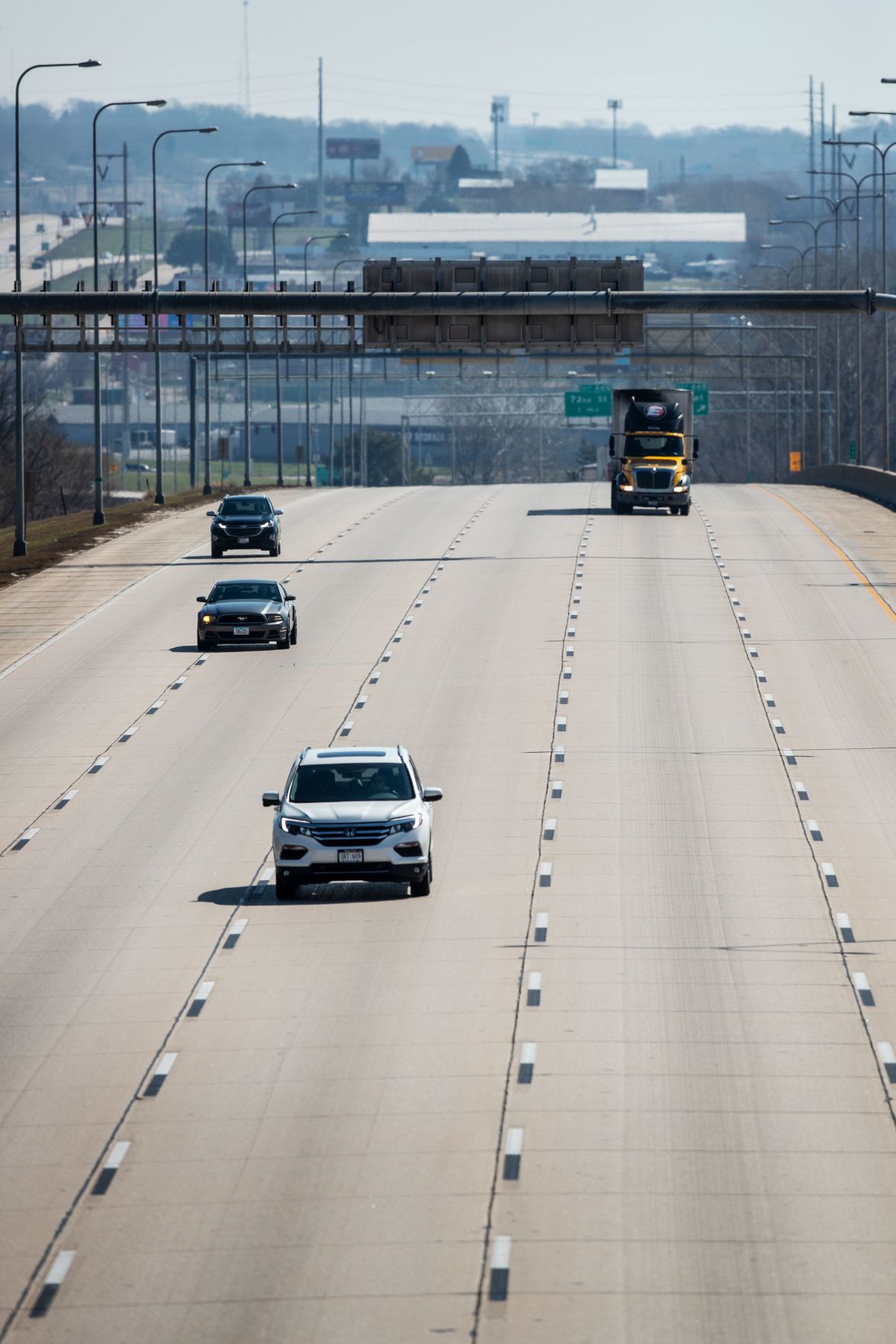 Traffic has dropped throughout Omaha and Nebraska, especially on the Interstate. It is down 41% on Interstate 80 from Lincoln to Iowa compared with the average for the same week in 2016 to 2018.

Traffic across Nebraska has plummeted on streets and highways as people shelter to fight the novel coronavirus.

Different counts suggest Dodge Street traffic through central Omaha has dropped by half, while Interstate traffic is down by 41% from Lincoln to Iowa.

The data shows an incredible turn as society pivots in response to the pandemic. But amid the calls to stay home for the greater good, the figures also raise the question: Are people still driving too much?

Unacast, an international analytics company that uses cellphone location data, has created a “Social Distancing Scoreboard” rating the United States, individual states and counties on how much they’re cutting their travel and nonessential visits.

Nebraska rates a C- for its behavioral changes, although it’s unclear how traffic from the continued flow of vital interstate trucking traffic factors into the state’s grade. Douglas County rates a C.

But he said the traffic that remains is often the people who need to take their trips the most, including doctors, nurses and people supporting vital services.

“It’s good that they’re there,” Youell said, “and it’s kind of a lifeline for keeping everything going in this unprecedented time.”

The Interstate showed the biggest drops. Traffic was down 41% on Interstate 80 from Lincoln to Iowa and in Omaha on Interstates 480 and 680. Traffic volume was down 36% on I-80 west of Lincoln.

Other Douglas County and Sarpy County highways and streets were down 28% by the end of March.

The data comes from the department’s system of 67 automated, continuous traffic counters across the state.

Kyle Schneweis, the Department of Transportation’s director, said Nebraska’s freight traffic remains at near-normal levels. He said the department will continue analyzing the data to understand the impacts and trends.

Jeff Riesselman, the City of Omaha’s traffic engineer, said the city is looking at its available traffic numbers, too. They appear to be in line, he said, with the state’s figures and traffic numbers nationally.

Wednesday, the city released a collection of traffic figures compared with the last week of February. The numbers were measured at three intersections with radar detection signals:

For Douglas County, the Unacast scoreboard indicates that the average distance traveled was down about 47%. According to the company, nonessential trips in Douglas County were down about 61%.

I-80 to be rebuilt through Omaha; $860 million plan outlines future of metro area freeways

The plan targets trouble spots known to local drivers, calls for wholesale interchange redesigns to improve traffic flow and opens the door to signaled on-ramps and driving on the Interstate shoulder.

Key changes planned for freeways in the Omaha area

Here is a breakdown of key changes to Omaha-area Interstates as well as the Kennedy Freeway and West Dodge Road. This list also includes other changes, such as buses being allowed to drive on shoulders.

What's in an ORBT? Check out Omaha's new buses

Metro transit showed off its fleet of new buses for its rapid transit line, which is scheduled to debut this fall.

Nebraska is 'months' away from having widespread coronavirus testing available, Ricketts says

Gov. Pete Ricketts said Wednesday that no governor is happy with the amount of testing available. He also said Nebraskans need to do better at following social distancing guidelines, including limiting the size of groups, maintaining a 6-foot distance between people and staying home if sick.

The latest Douglas County cases involve three people in their 20s, two women in their 60s, a man in his 50s and two men older than 70.

Omaha real estate agent Ralph Marasco grabbed people's attention with his heart and his humor. By the time he let go, he had usually won them over.

The service member followed Offutt protocols and was not in close contact with anyone outside of their house while experiencing symptoms. They are recovering and being closely monitored by medical personnel, officials said.

Lincoln's latest cases of the novel coronavirus involve a woman in her 40s and a man in his 60s, officials said Thursday.

'This is not good': COVID-19 cases surge in Grand Island area; 10 beef plant workers among the ill

The virus has emerged at several nursing facilities, a medical clinic and the massive JBS USA meatpacking plant, where beef processing continues even after 10 workers tested positive.

The new cases include two adults from Pottawattamie County and one from Mills County. All three are 60 years old or younger.

The figures show an increase in 36 confirmed cases since Friday evening’s count.

Nebraska's rules are as restrictive as some states with official orders, and its death rates remain low. But some say a formal edict would bring more compliance — and could save lives.

With I-80 construction starting this summer, will the Omaha area see traffic tie-ups?

State transportation officials estimate Interstate traffic in Omaha has dropped some 40% during the coronavirus pandemic.

Traffic fatalities drop in Nebraska during the pandemic, but some are driving way too fast

The latest numbers from the Nebraska Department of Transportation show that traffic is still down.

I-80 westbound traffic was light at about 11 a.m. Wednesday, as viewed from the 96th Street bridge.

Traffic has dropped throughout Omaha and Nebraska, especially on the Interstate. It is down 41% on Interstate 80 from Lincoln to Iowa compared with the average for the same week in 2016 to 2018.