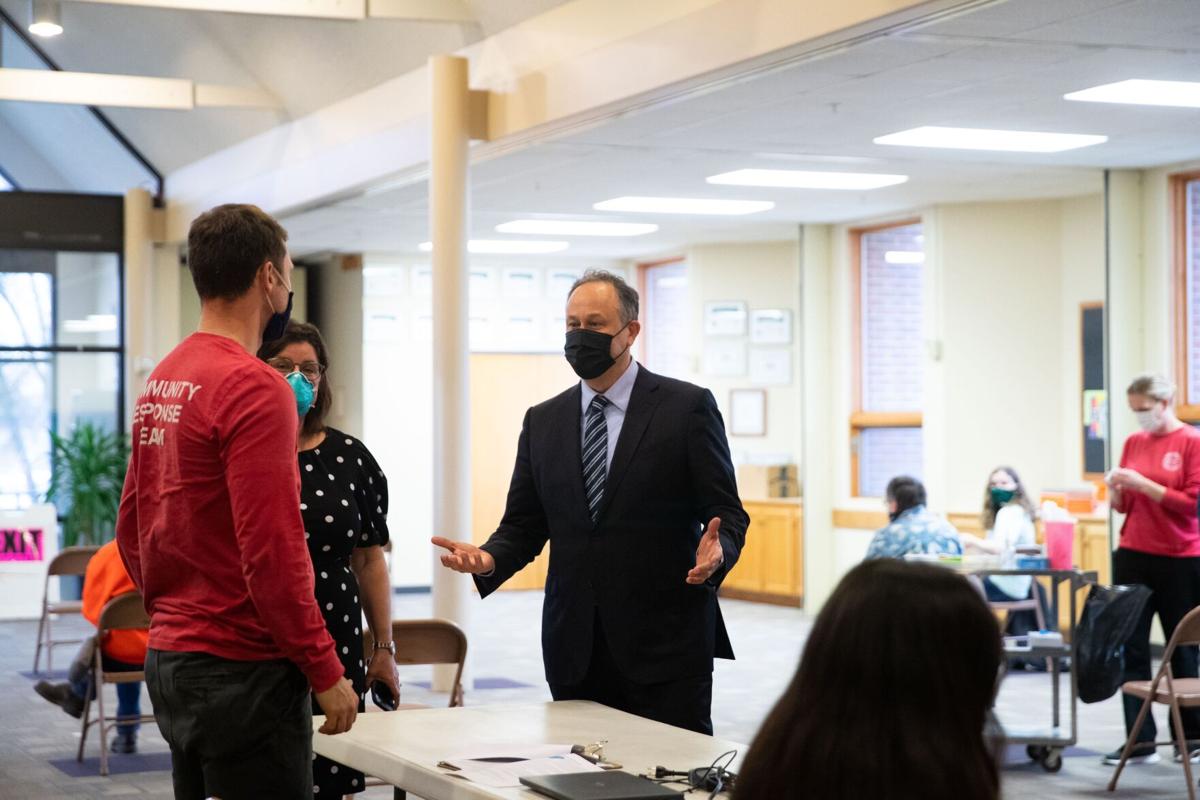 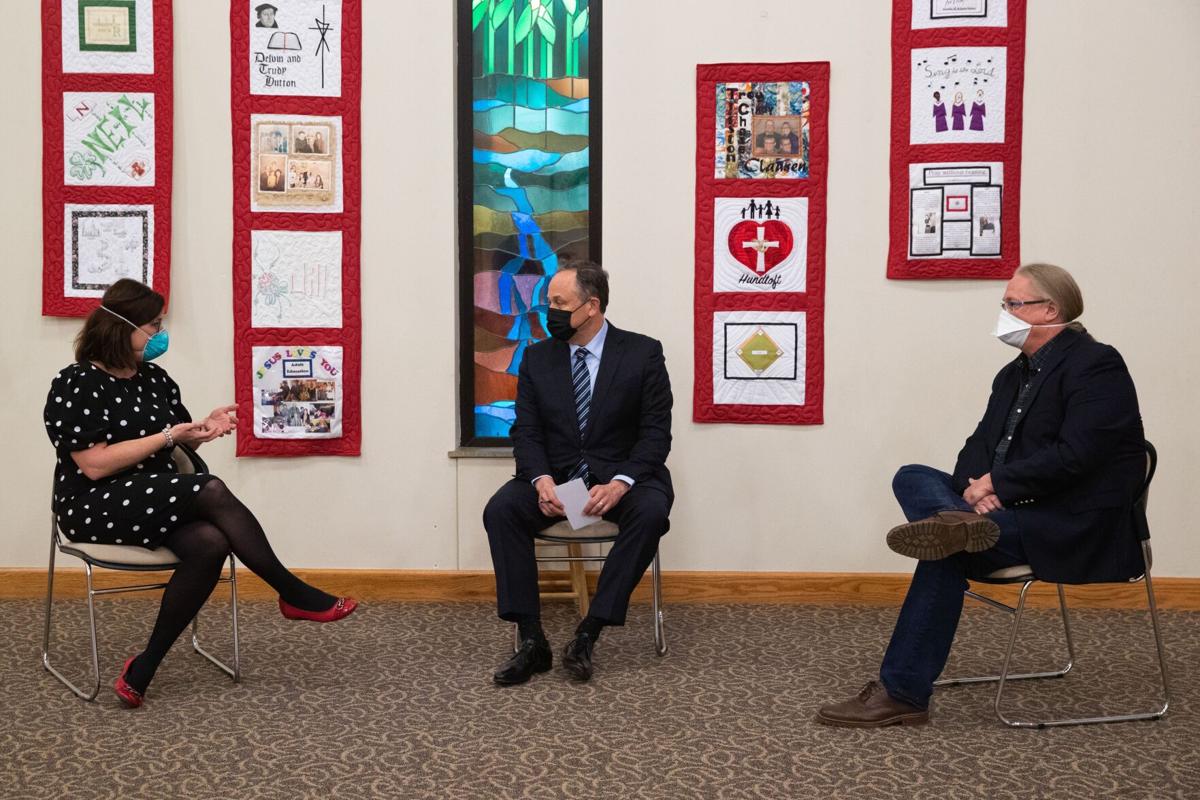 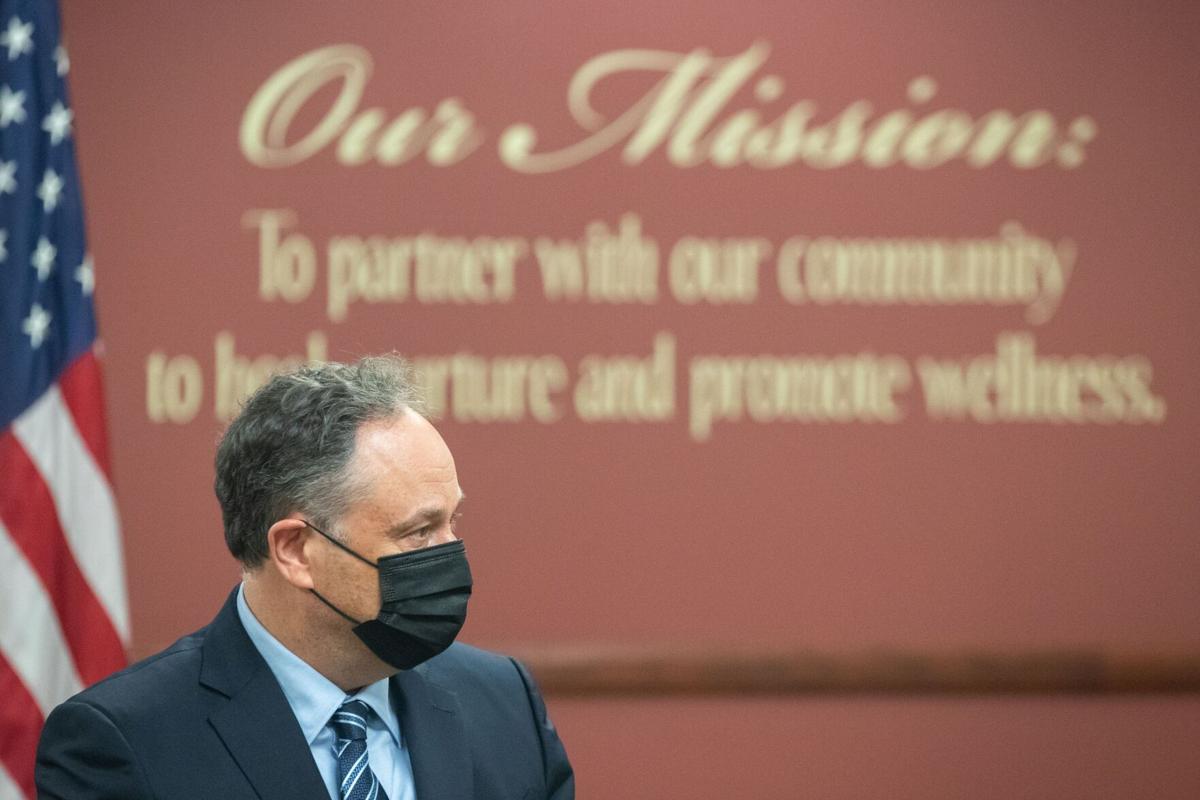 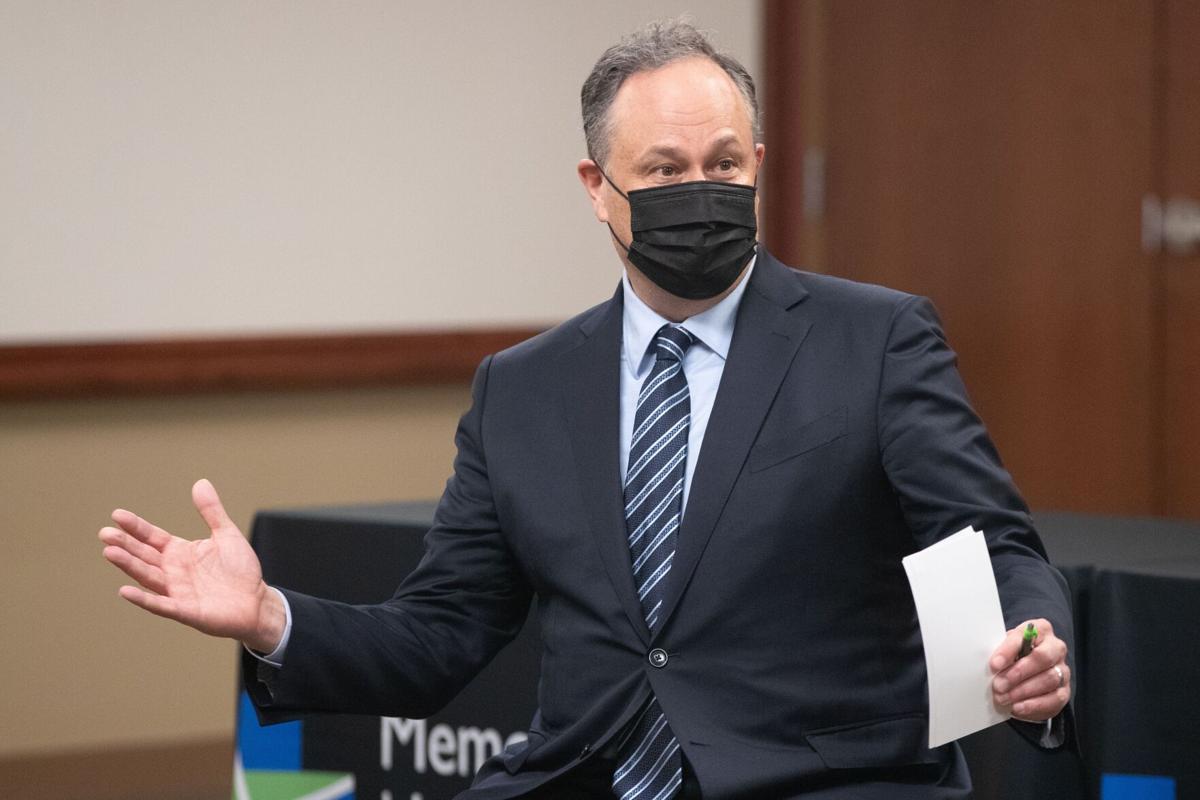 Doug Emhoff meets with Memorial Community Hospital workers in Blair on Tuesday. He thanked staffers for their passionate work during the pandemic.

BLAIR, Neb. — The husband of Vice President Kamala Harris thanked workers at a rural hospital here for their efforts to fight the COVID-19 pandemic. Then he asked everyone in Nebraska to do their part, too.

Get the shot, Douglas Emhoff said.

“When it’s your turn, get the vaccine,” he said. “It’s safe, it’s painless and they work.”

Second gentleman Emhoff was in Nebraska on Tuesday to promote the massive $1.9 trillion stimulus bill, particularly highlighting provisions dealing with health care. In addition to his hospital stop, Emhoff visited a vaccination clinic and heard the concerns of local health officials, including the need for additional staffing and improved rural broadband.

Emhoff’s visit to Nebraska was about both politics and policy.

President Joe Biden has said former President Barack Obama “paid a price” for his reluctance to take a victory lap after passage of the 2009 stimulus package in the midst of the Great Recession. So Biden, Harris and their spouses and Cabinet members have been traveling the country talking of how the American Rescue Plan will impact lives.

There is no less of a partisan divide over this stimulus bill, which passed Congress without a single GOP vote. The Republican National Committee marked Emhoff’s visit with a statement criticizing the stimulus as a “boondoggle” full of provisions unrelated to the pandemic. They said Nebraskans would “see right through (Democrats’) progressive wish list.”

Emhoff said he did not want to talk politics Tuesday, but noted in an interview that the bill has been “wildly popular.” It has registered 70% support in national polls.

While the stimulus bill is best known for those $1,400 cash payments Americans have recently received, Emhoff on Tuesday focused on public health.

The bill increased subsidies available for those who obtain their health insurance through the marketplaces of the Affordable Care Act. The White House said the plan also includes provisions specifically supporting rural hospitals with vaccination administration, telehealth services, and rural workforce programs.

Emhoff noted that Tuesday was the 11th anniversary of passage of the ACA. He encouraged Nebraskans to look into the ACA provisions of the stimulus to see if they are eligible for the increased subsidies.

In visiting with health care workers at Memorial Community Hospital in Blair, Emhoff said he was impressed by how passionate they are about their work during the pandemic.

It really has been all hands on deck. Emhoff said he had learned that the hospital’s chief administrator, Manny Banner, had rolled up her sleeves to help out with COVID testing and vaccinations.

290,000 Nebraskans have been fully vaccinated against COVID, one of best numbers in US

“I really applaud you for leading from the front,” he said.

Terrin Leehy joined the hospital’s emergency department in August just in time for COVID’s fall surge in Nebraska. Things at times got stressful and hairy, she said.

“We were stretched pretty thin,” she said. “It was scary, but you really did feel like a superhero.”

Now Leehy is part of the community’s vaccination efforts, which she said has been equally as rewarding.

“It’s so encouraging,” she said. “People are so excited to be getting these vaccines.”

At the vaccination site in a church next to the hospital, Terra Uhing, director of the Three Rivers Public Health Department, told Emhoff that the pandemic’s impact will be around for a long time. There are more people dealing with mental health issues and also people who have not taken care of their general health in the past year, including putting off cancer screenings.

Both she and hospital officials stressed to Emhoff the need to improve internet connectivity in rural areas, which has hampered efforts to get people signed up for vaccinations.

As Emhoff left, he encouraged the vaccination clinic workers.

An estimated 132,000 Nebraskans are now eligible for plans through the federal marketplace under which their premiums would be entirely covered by subsidies.

Doug Emhoff meets with Memorial Community Hospital workers in Blair on Tuesday. He thanked staffers for their passionate work during the pandemic.