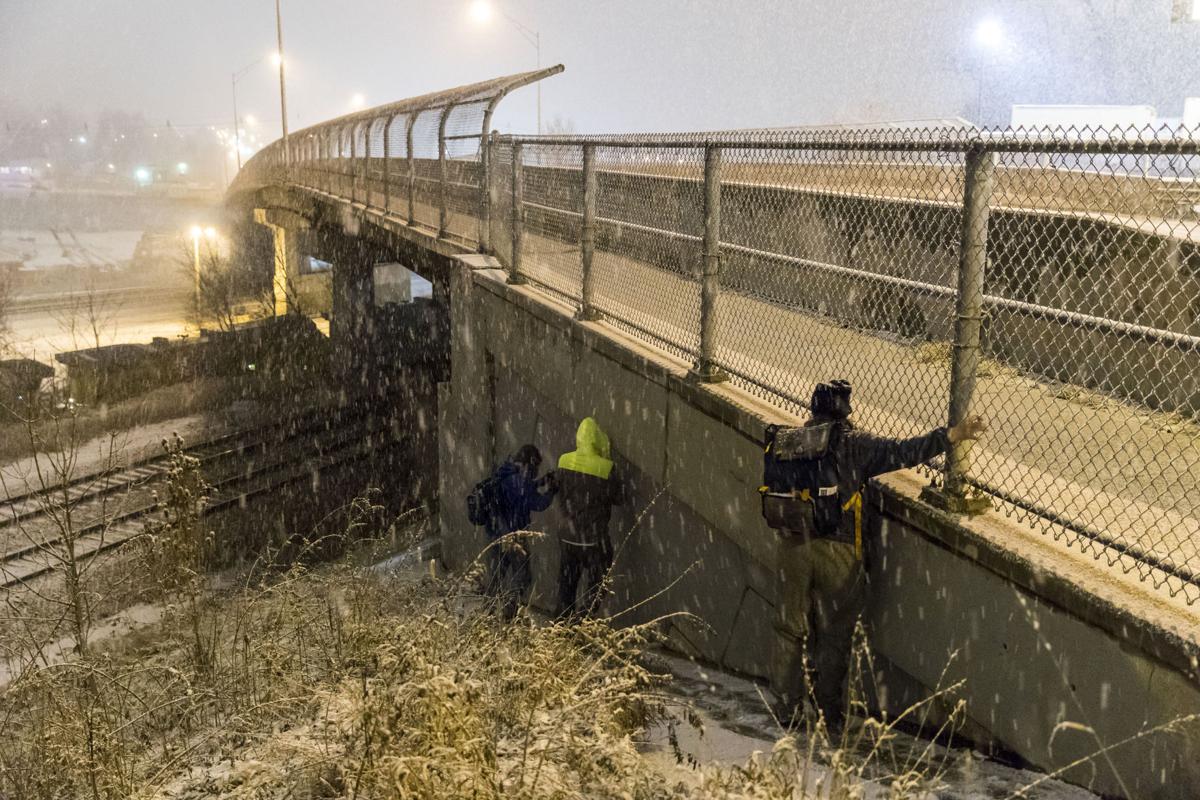 Gary Hankins, left, Bob Davis and Melissa Neuenfeldt look under an Omaha bridge for homeless people during Tuesday night’s point-in-time count, which is required by federal law to estimate the homeless population in a city. 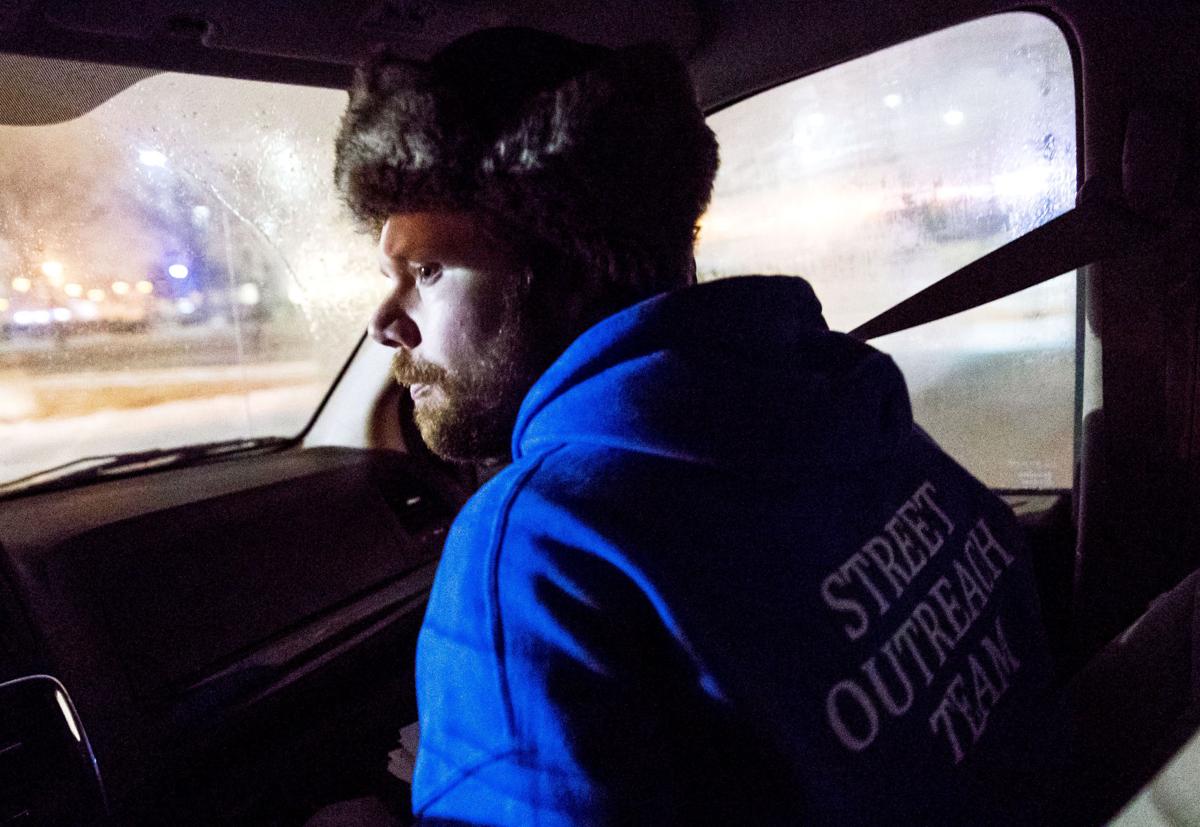 Community Alliance outreach worker Gary Hankins searches for homeless people for an annual point-in-time count of the homeless in the Omaha metro area on Tuesday. Hankins was one of about 75 volunteers who participated in the single-night census.

The flashlight beam swept over the mound of tarps and the piles of milk crates and rusty bicycles.

“Outreach!” Gary Hankins called into the mist, shining his flashlight on a shopping cart lodged in the mud.

The air smelled of smoke — a few piles of charred logs suggested the homeless encampment tucked in the overgrowth had recently been active. But as the rain turned to snow Tuesday night, the camp, which is near downtown, was quiet.

“Anybody home?” asked Hankins, an outreach worker with Community Alliance.

A woman ducked out from under the tarps, arms wrapped around a thin waist. She recognized Hankins — he’s part of the street outreach team that provides for the city’s unsheltered homeless five nights a week year-round.

But on Tuesday night, in addition to blankets, snacks and water, Hankins carried paperwork for the annual point-in-time count of the homeless in the metro area.

About 75 volunteers split into 10 teams on Tuesday, canvassing Douglas, Sarpy and Pottawattamie Counties as part of the single-night count conducted by the Metro Area Continuum of Care for the Homeless.

Federal law requires the count to be completed at least every other year during the last 10 days of January. This year, both Iowa and Nebraska conducted the counts on Tuesday.

In the metro area this year, teams found fewer than 50 unsheltered people — down about 10 from last year. Those are preliminary numbers, said Lisa Vukov, the continuum’s assistant director. The full count, including all who stayed in a shelter Tuesday, will take longer to process.

Last year, the count found 1,509 homeless adults and children in the area, with fewer than 4 percent unsheltered. According to the U.S. Department of Housing and Urban Development — which collects the national point-in-time data — Omaha had one of the lowest unsheltered homeless rates of all major cities in 2015.

Vukov said that claim may be misleading.

“People think Omaha doesn’t have a homelessness problem,” she said. “We are here to prove that wrong.”

Though the continuum collects data year-round, conducting the count in January may lead to the lower numbers of unsheltered homeless than other times of the year, she said. This year’s and last year’s counting nights both were cold and snowy.

Hankins said Tuesday night was atypically slow. “Ideally, that means that everyone went to find shelter, but it doesn’t feel all that representative. I’ve always wondered what our numbers would be if we did this in June.”

Hankins’ team drove and walked around downtown Omaha, checking under bridges, in overgrown areas and in parked cars and campers. After five hours, the team met six unsheltered homeless people.

One team member, Alexis Dickerson, had never been out with the street team before. The 25-year-old is a self-sufficiency case manager at the Women’s Center for Advancement. Each team on Tuesday included a representative from the women’s center and from Veteran’s Affairs to explain available services.

“This was really eye-opening,” Dickerson said as she climbed back into the van, shaking snow off her coat. “I see a lot of homeless people in my work, but now I know the conditions they are sleeping in. It’s a reality check.”

Dickerson gave the woman living under the tarps her business card and an emergency cellphone. Hankins handed her bus tickets so she can visit the women’s center to further discuss her options.

“I really hope I see her again,” Dickerson said.

For Melissa Neuenfeldt, an emergency room nurse, the night was a familiar one. She has been going out with the street outreach team twice a week for a year.

Her interest started last winter, when she drove past a woman shivering under a blanket as the night dipped to subzero temperatures.

“I just kept thinking, ‘She’s going to die.’ I didn’t want to read about it in the paper and know that maybe I could have helped.”

So she turned around and drove back. When she approached the woman, Neuenfeldt realized she recognized her.

“They take care of these people,” she said. “So I joined. It fills me up.”

In her year of volunteering, Neuenfeldt said it’s difficult to balance wanting to help and respecting people’s wishes. Still, she has seen several people — including the shivering woman on the street corner — find housing. She has bandaged wounds and passed out water bottles. She has listened to the varied stories from people who never thought they would be living on the streets.

“It’s so rewarding,” she said. “It feels like we are a part of the solution.”

On her drive home from work, even if she’s not volunteering that night, she finds herself looking under bridges, behind buildings, in the corners of parking lots.

“This experience has completely changed my view of this city,” she said. “I wish more people could see it this way.”

For the past eight years, Eric and Kristy Carlson and their sons, Brandon, 14, and Aidan, 10, have built Christmas ornaments out of Legos and sold them online. All of the profits — $34,000 to date — are then donated to homeless and domestic shelters in the Omaha area.

No matter what it is he’s doing, Mickey Manley, 31, spends an hour every day making a difference in the Omaha community, including with Goodfellows, The World-Herald’s charity.

Gary Hankins, left, Bob Davis and Melissa Neuenfeldt look under an Omaha bridge for homeless people during Tuesday night’s point-in-time count, which is required by federal law to estimate the homeless population in a city.

Community Alliance outreach worker Gary Hankins searches for homeless people for an annual point-in-time count of the homeless in the Omaha metro area on Tuesday. Hankins was one of about 75 volunteers who participated in the single-night census.