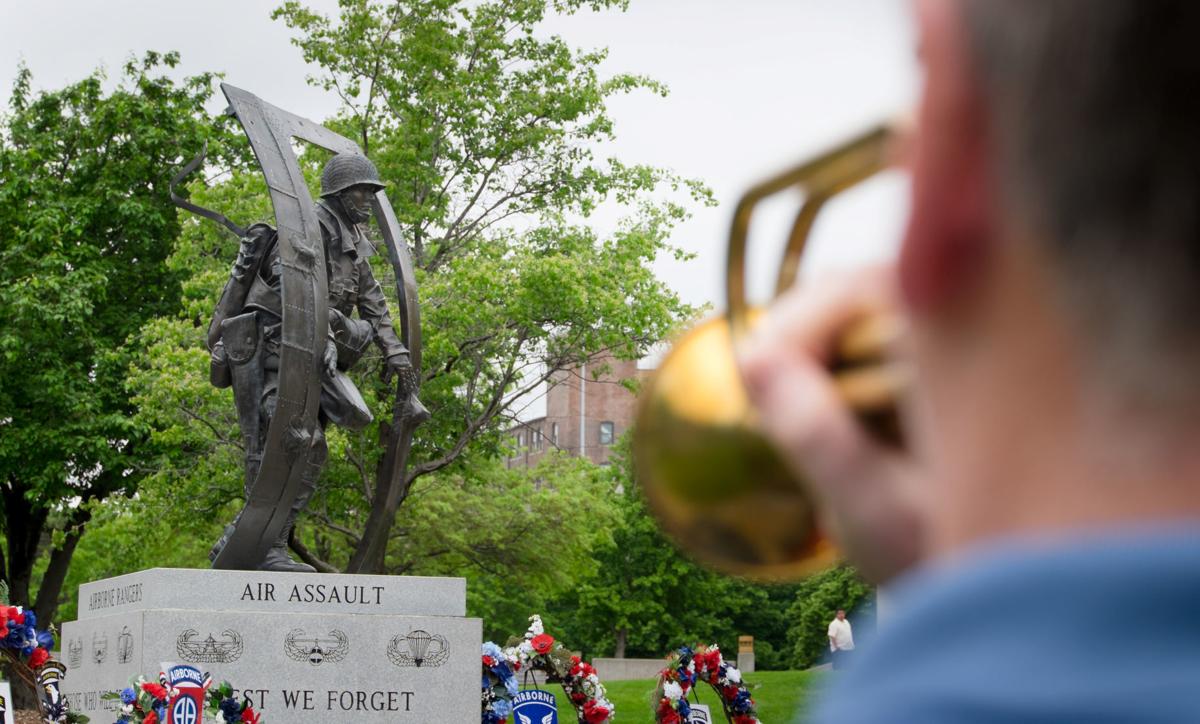 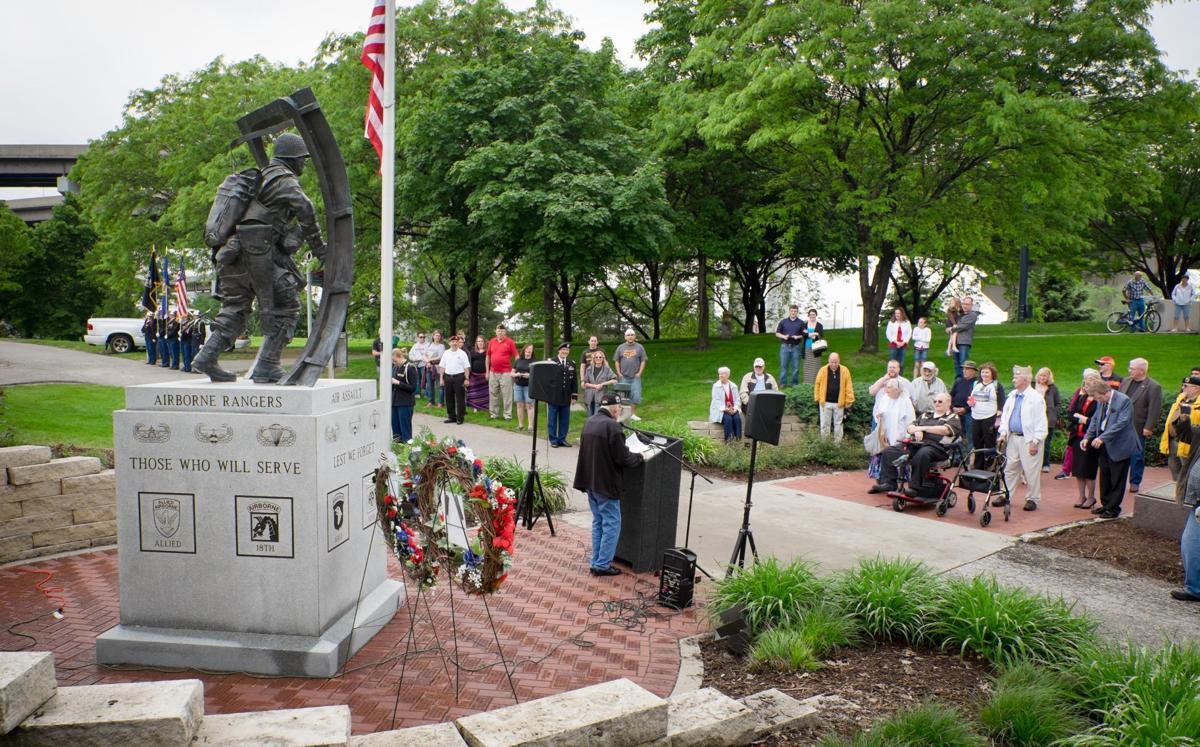 The memorial honoring airborne troops at Heartland of America Park will be moved to Memorial Park to make way for the revamp of Omaha's riverfront. Retired 1st Sgt. Daniel Falcon, the head of the Heartland Airborne Memorial Association, is happy about the move and said the memorial should have been put in Memorial Park to begin with. 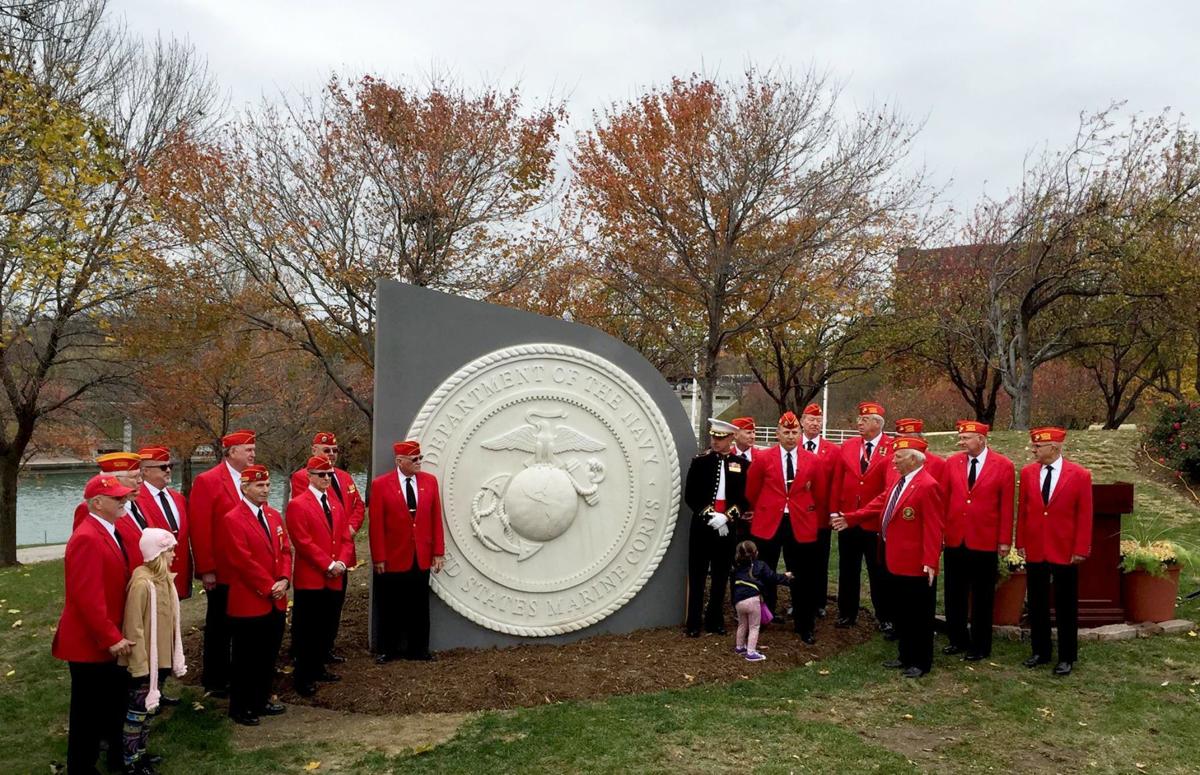 The U.S. Marine Corps memorial at Heartland of America Park could be moved to Memorial Park by the end of 2019. A group dedicated to preserving the memorial wants to put bricks around the 8-foot emblem once it's in its new home.

War memorials in the path of Omaha’s downtown riverfront project will soon get a new home.

The area is a natural fit, with its newly rehabbed World War II colonnade and monument dedicated to those who died during the Korean and Vietnam Wars.

Retired 1st Sgt. Daniel Falcon, who heads the Heartland Airborne Memorial Association, said he’s pleased about the plan, saying the airborne memorial and honor bricks should’ve been placed in Memorial Park when they were created about a decade ago.

He envisions that the move will mean that Memorial Day and Veterans Day ceremonies will all take place at Memorial Park. His group used to hold a program downtown, while another took place in the park along Dodge Street.

A concept plan for Memorial Park shows the airborne and Marine monuments along a trail east of the rose garden.

“Now that we’re all in one place, we can put all our ideas and support into one joint ceremony,” Falcon said.

George Vogel, a veteran of the Marines who’s on the committee to help preserve the Marine Corps emblem memorial, said he, too, is happy about the move. He said his group hopes to raise funds to add bricks around the 8-foot emblem once it moves to Memorial Park.

Omaha Parks Director Brook Bench said officials have long been planning for the future of the downtown memorials. The riverfront project has been in the works for a couple of years.

“We’re getting pricing right now to lift them (the memorials) up and put them back exactly the way they were,” he said. The cost will be covered through the riverfront project’s funds, he said.

A roughly $290 million, mostly privately funded endeavor, the riverfront project is set to commence next month, starting with the closure of Gene Leahy Mall. Construction will last several years, and portions of a 90-acre area of downtown will close down in phases.

Heartland of America Park — where the war memorials to be moved are now — and Lewis & Clark Landing are part of the project. The idea of the effort is to make those areas more active and inviting public spaces. The project includes raising the Gene Leahy Mall to street level.

Bench said that the Take a Seat public art pieces in the mall are set to go to the new Flanagan Lake near 168th and Fort Streets. And there’s discussion about sending additional items to Hanscom Park and Fontenelle Park.

But some pieces within the project area will stay, such as the Labor monument and Omaha Fallen Firefighters Memorial, both at Lewis & Clark Landing.

“We know the importance of all of these different pieces of art and sculptures and war memorials and we will make sure we do our due diligence to make sure we find them proper homes,” Bench said.

City Councilman Pete Festersen, whose district includes Memorial Park, said he’s very supportive of the plan, given that the park has become the focal point for honoring veterans across the state.

“Building upon that with additional pieces of art and commemoration will only enhance that stature,” he said. “And it’ll be a nice improvement that neighbors will appreciate and that our veterans deserve.”

Omaha has been transformed — again and again

Kiewit Corp. will oversee construction of the 90-acre plan, and the city will put $3 million of taxpayer funds each year over the next decade toward operating and maintaining the project.

Here's something warm to think about: the Omaha Summer Arts Festival will move to north downtown for the next three years or so.

For decades, Omaha figuratively turned its back to the riverfront, and why not? It was gritty and not very pretty, an industrial zone with railroad repair yards and a polluting lead-smelting plant.

Omaha’s movers and shakers, with more than half the funds pledged privately, are forging ahead with a $290 million proposal to breathe new lif…

Omaha’s movers and shakers are forging ahead with a mostly privately funded proposal to breath new life into the city’s downtown riverfront.

The water in Omaha's Gene Leahy Mall is nearly gone. Here's where it went and how workers did it

The tarps encasing the bridge serve a practical purpose — catching lead paint chips and dust while the bridge is being rehabbed.

The memorial honoring airborne troops at Heartland of America Park will be moved to Memorial Park to make way for the revamp of Omaha's riverfront. Retired 1st Sgt. Daniel Falcon, the head of the Heartland Airborne Memorial Association, is happy about the move and said the memorial should have been put in Memorial Park to begin with.

The U.S. Marine Corps memorial at Heartland of America Park could be moved to Memorial Park by the end of 2019. A group dedicated to preserving the memorial wants to put bricks around the 8-foot emblem once it's in its new home.