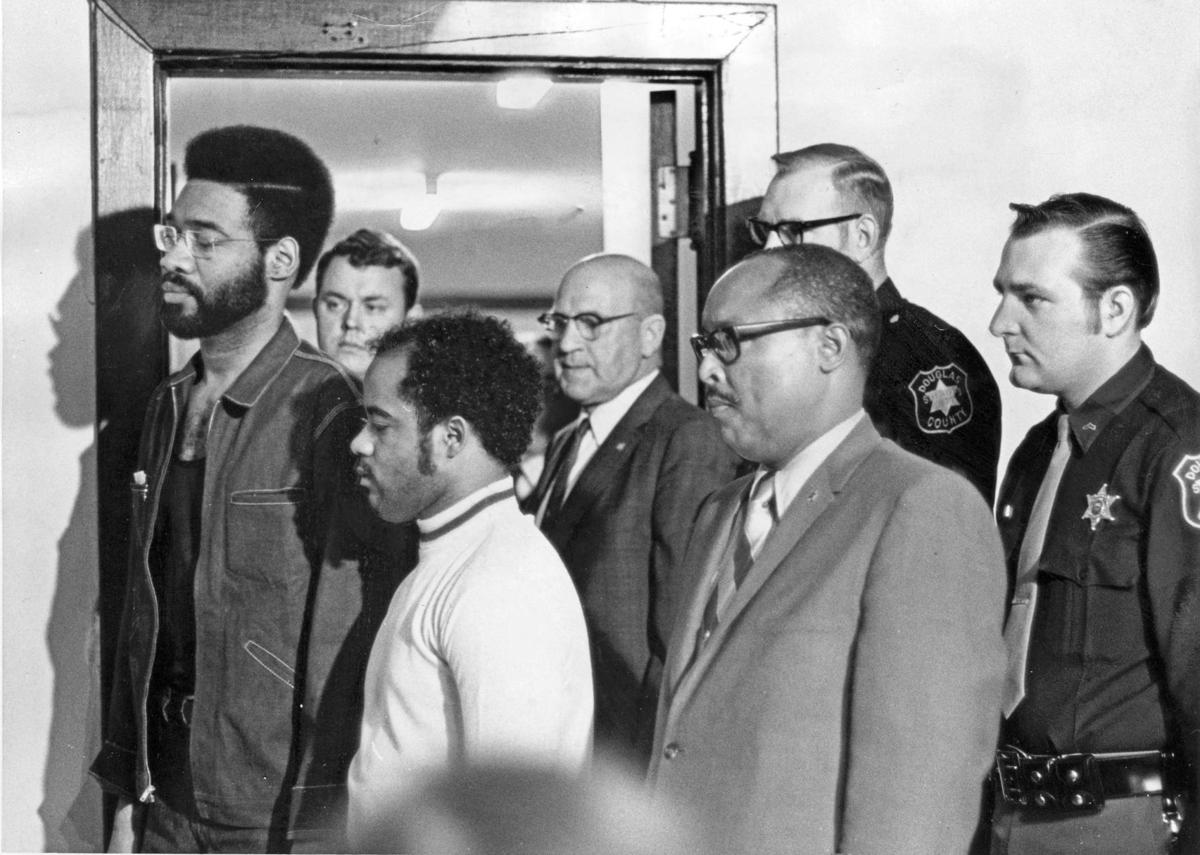 Ed Poindexter, left, and David Rice, in the light-colored sweater, were convicted in the 1970 murder of Omaha Police Officer Larry Minard. 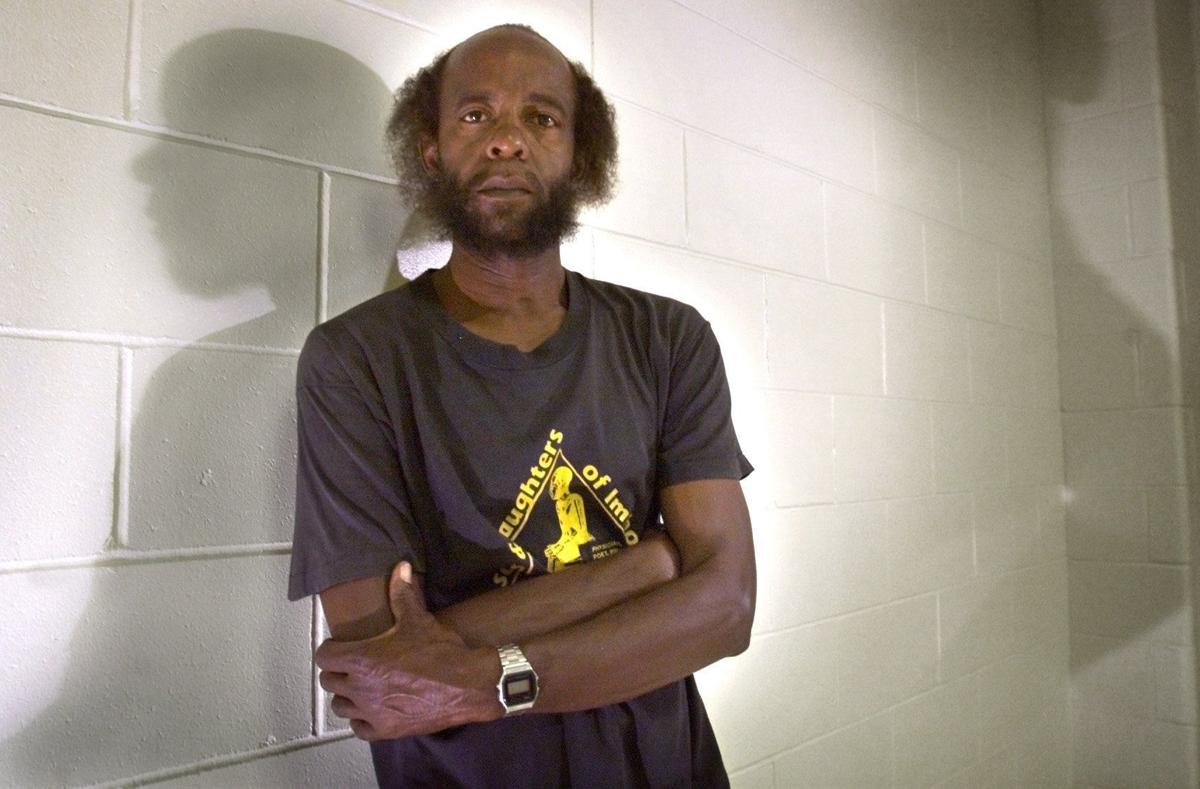 David Rice, who later adopted the African name Mondo we Langa. He died in prison in 2016. 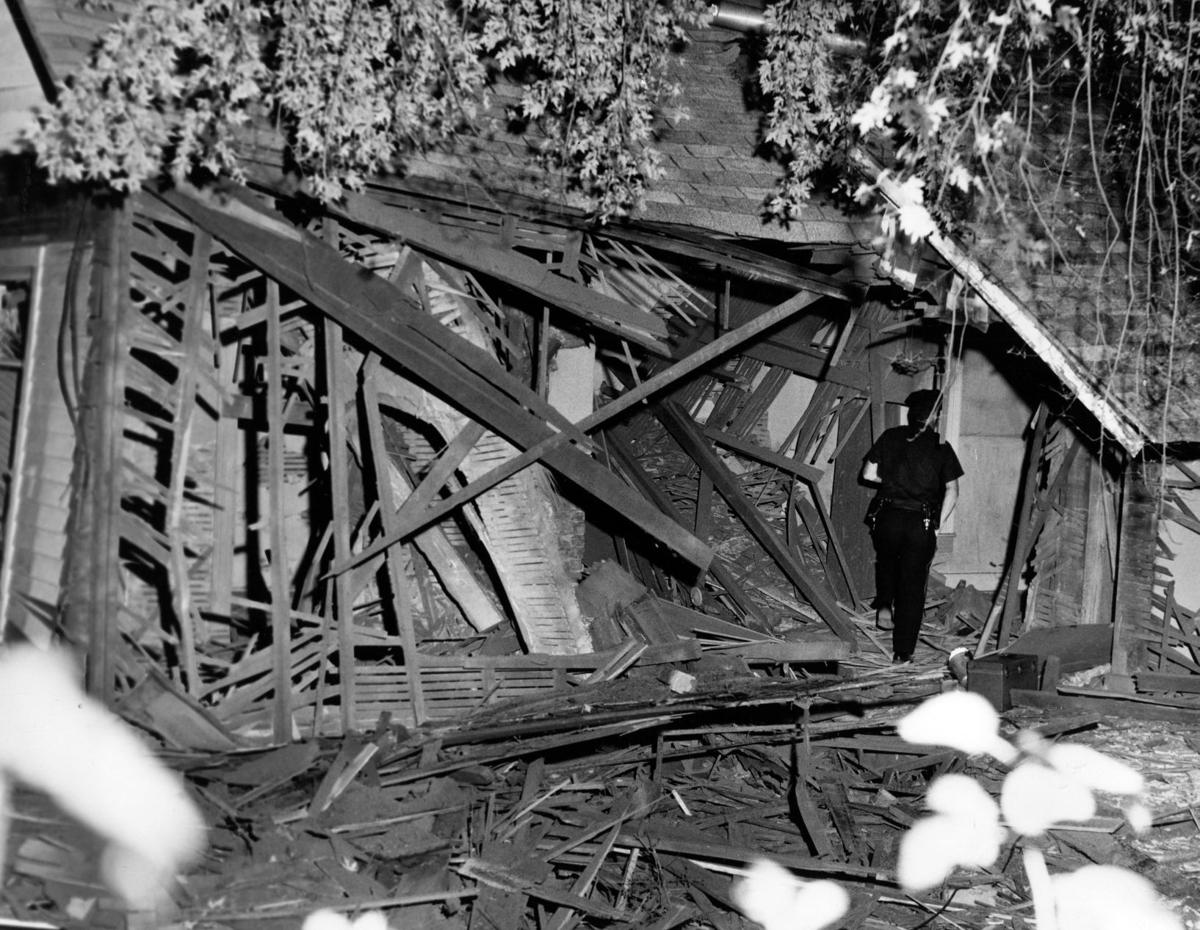 The scene of the explosion where Omaha Police Officer Larry Minard was killed when a suitcase containing dynamite exploded in 1970. 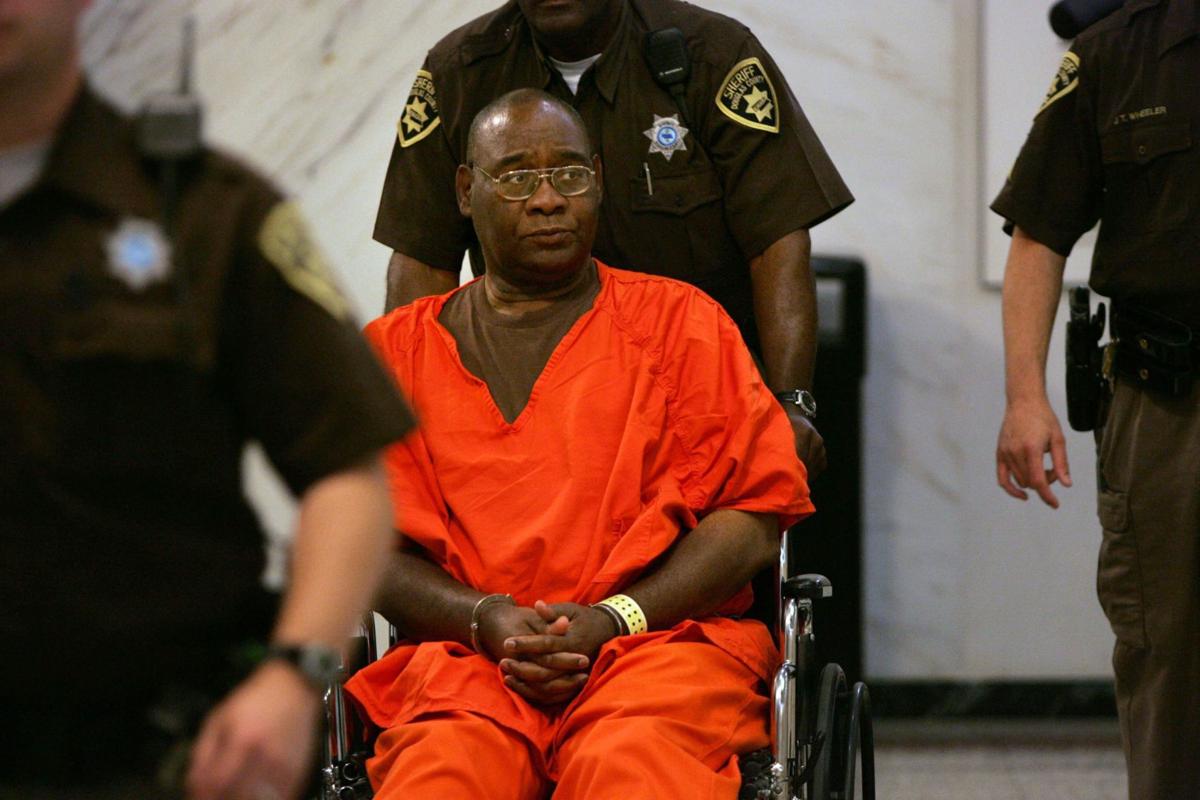 Edward Poindexter is serving a life term at the Nebraska State Penitentiary. 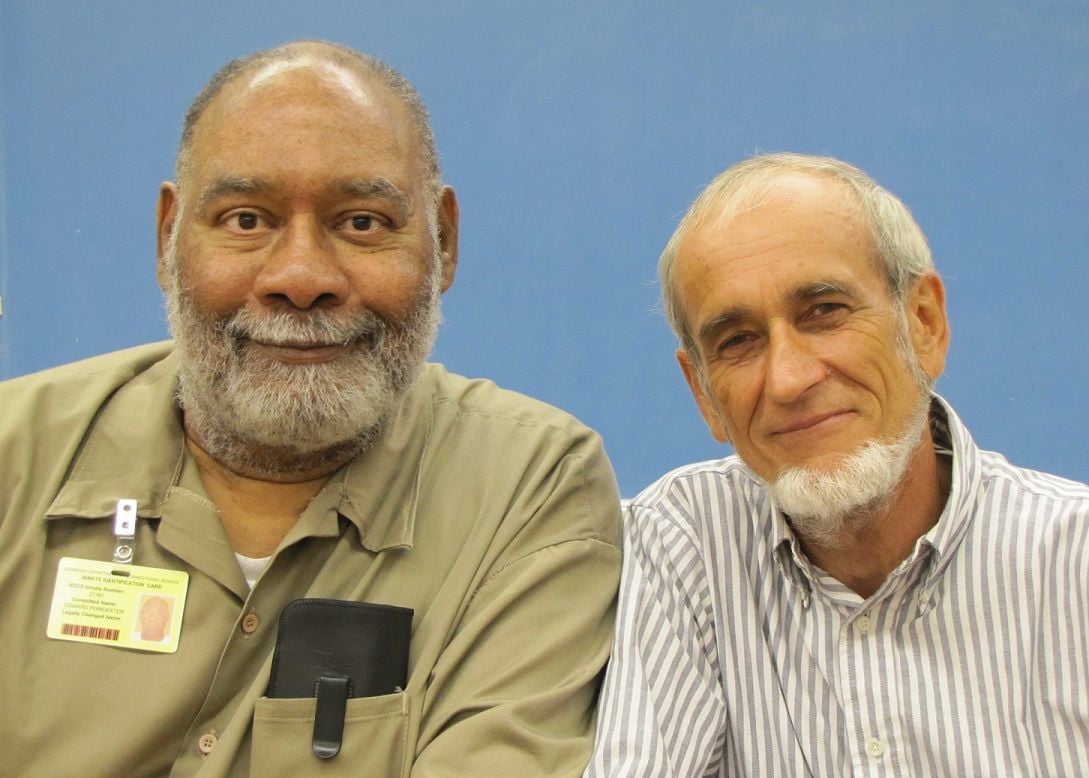 Ed Poindexter, left, is shown with author Michael Richardson in 2016. 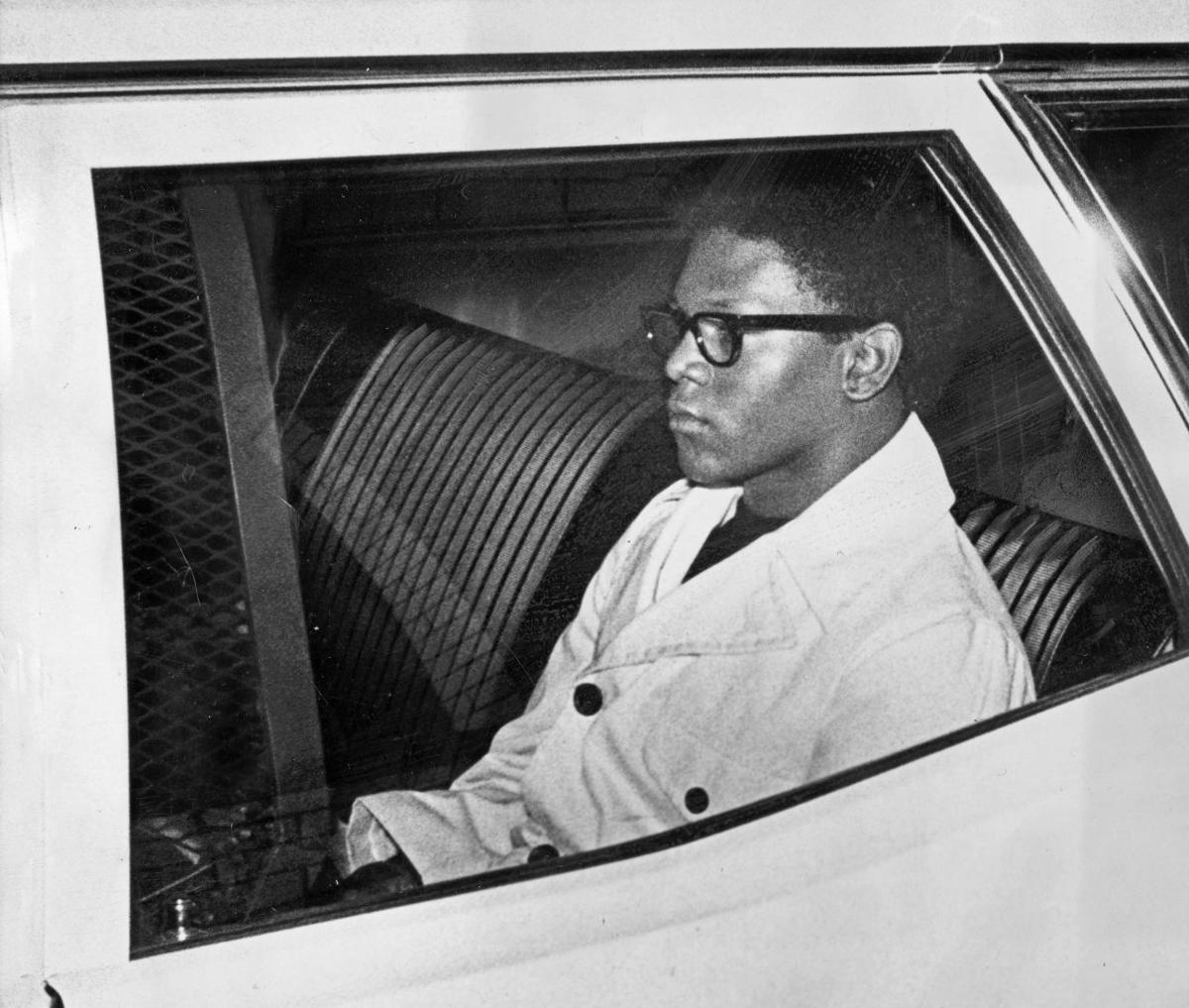 Duane Peak, the prosecution’s star witness, is pictured leaving the courthouse in 1971.

LINCOLN — The author of a recently released book on the booby-trap bomb murder of an Omaha police officer in 1970 says the real killer or killers have escaped justice.

Michael Richardson, who spent more than a decade digging through FBI and police records for his book, recently asked Douglas County Attorney Don Kleine and Gov. Pete Ricketts to reopen an investigation into the slaying of Police Officer Larry Minard.

Richardson, an Omaha native who covered part of the 1971 trial that convicted David Rice and Ed Poindexter of the murder, said he’s convinced by his review of the case and records not previously released that the pair was framed because they were black militants at a time when racial tensions were ripping apart the nation, as well as Omaha.

Rice and Poindexter were convicted and sentenced to serve life in prison for what was one of the most sensational murders in Omaha history. Rice, who later adopted the African name Mondo we Langa, died in prison in 2016. Poindexter, now 74, remains behind bars at the Nebraska State Penitentiary.

Richardson, who delivered letters to Kleine and Ricketts in May, isn’t the first person to call for a review of the case. National figures like black activist Angela Davis and former U.S. Attorney General Ramsey Clark, as well as Amnesty International, have said the two men amount to political prisoners who should go free.

But others, including the family of Officer Minard, have long maintained that the two were justly convicted.

Richardson said his plea for reopening the case is critical now because justice could still be delivered to Poindexter, who required heart surgery two years ago.

“This case is in the past, but it is in the present for Ed Poindexter. He’s still locked up,” he said, “and you never get used to it.”

Kleine, when reached for comment, said that he is always willing to take a second look at a case when new evidence arises, but that the conviction of Rice and Poindexter has been upheld in the face of “intense scrutiny” over the years by the Nebraska Supreme Court, federal courts and other attorneys.

“There’s a lot of people who have looked at this (case),” Kleine said. “But I’m not aware of anything that leads me to believe these people are completely innocent.”

Members of Minard’s family have said that it’s “totally and completely ridiculous” to believe that the two men were framed. In 1994, then-Omaha Police Chief James Skinner testified against Poindexter being considered for parole, saying the evidence showed they participated in a conspiracy to kill police officers, and that warrants life in prison.

Richardson, who is now based in Belize, said that there were many things unsettling about the investigation and conviction of the “Omaha Two” that should have raised red flags, “but due to the politics of the day, it didn’t.”

Among the assertions made by Richardson in his book, “Framed: J. Edgar Hoover, COINTELPRO & the Omaha Two Story,” are:

Peak, who initially said that Rice and Poindexter had no connection to the bombing but later testified that they directed him to plant the bomb, was granted immunity and moved to the Pacific Northwest in exchange for his testimony. Richardson said it was suspicious that the person identified as supplying the dynamite and suitcase for the bomb that killed Minard was not prosecuted, along with Peak and one other person linked to the dynamite.

Lincoln attorney Bob Bartle, who represented Poindexter in his most recent appeals a decade ago, said he remains suspicious of the “dirty tricks” played by federal authorities during the investigation and trial, but says the case lacks the irrefutable evidence, such as DNA evidence, that not only exonerates Rice and Poindexter but fingers who actually killed Minard.

“The traditional avenues of appeal for Ed Poindexter are closed, absent an extraordinary measure taken by a prosecutor or the (State) Board of Pardons,” Bartle said. “I would welcome (a reopening of the case), but would be pleasantly surprised if it came.”

Richardson said that his “guilty knowledge” of the case prompted him to dig deeper and write the book, which he maintains is the first time all threads of the case have been presented in one package.

“It’s too late to test for dynamite, but it’s not too late to see who (really) made that call,” he said.

Best of the weekend: A Hollywood Walk of Fame star for producer from Omaha; Another Nebraska golf course masterpiece — and 6 other can't-miss stories

Omaha native returns to discuss his book on Rice-Poindexter case

Omaha native Michael Richardson will return to the city this week for a series of events to discuss his recent book, “Framed,” his account of one of the most sensational slayings in Omaha’s history, the booby-trap bombing of Police Officer Larry Minard in 1970.

"He loved being a lawyer," his wife and former law partner said. "Everything about it: research, going to court, knotty problems, being a diplomat."

Where thousands once celebrated Bob Gibson, riots and rifles left a scar on North Omaha​

Omaha united to celebrate Bob Gibson in 1964, but within two years, the tension on the Near North Side grew too hot to contain.

In the early 1960s, blacks in North Omaha got off their knees, marched into the mainstream and proclaimed the grievances they long had endured in silence.

In Ernie Chambers' letters to The World-Herald, see the shift in his ideology

The letter to the editor does not state the man’s age or race. Simply his name: “Ernest Chambers.”

Creighton University was a long way from the Deep South, but the Rev. John Markoe recognized sin when he saw it.

Grace: Omaha students get 'eye-opening' tour of civil rights landmarks in the South

Preston Love Jr. believes that history needs to be made real for young people. And that once they can see and feel the past through stops in cities like Memphis, Birmingham, Selma, Montgomery and Atlanta, they can have a better grasp of their own futures.

While many publications are now digitized and searchable online, there are many more that remain accessible only through microfilm.

Backers of 75-year-old Ed Poindexter, who was convicted in the killing of an Omaha police officer in 1970 but has maintained his innocence, has paid his debt to society.

A prayer vigil will be held Monday for Ed Poindexter, as well as for the family of Omaha Police Officer Larry Minard, whose death he was convicted of in 1970.

Ed Poindexter, left, and David Rice, in the light-colored sweater, were convicted in the 1970 murder of Omaha Police Officer Larry Minard.

David Rice, who later adopted the African name Mondo we Langa. He died in prison in 2016.

The scene of the explosion where Omaha Police Officer Larry Minard was killed when a suitcase containing dynamite exploded in 1970.

Edward Poindexter is serving a life term at the Nebraska State Penitentiary.

Ed Poindexter, left, is shown with author Michael Richardson in 2016.

Duane Peak, the prosecution’s star witness, is pictured leaving the courthouse in 1971.