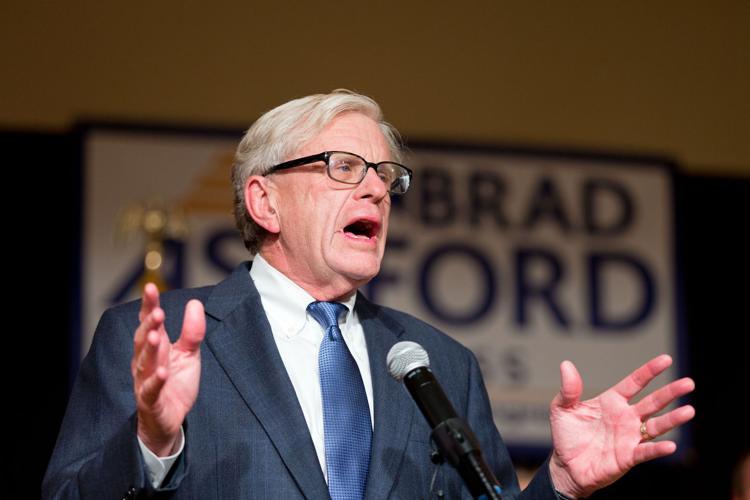 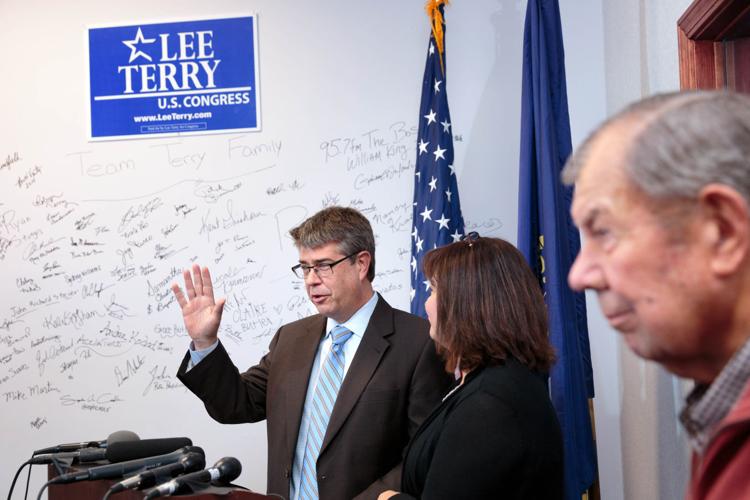 Joined by his wife and father, Republican Lee Terry gives his concession speech after a close race for the 2nd District seat from his campaign office in Omaha on Wednesday.

The first Democrat Omaha has sent to the U.S. House in two decades celebrated his victory Wednesday by promising that he will reach out to Republicans.

“I am going to go to Washington, I am going to make 25 friends and we are going to change the culture by working together,” Brad Ashford told dozens of jubilant supporters who gathered on the lawn of his Westside-area home.

He spoke shortly after his opponent, incumbent Rep. Lee Terry, delivered his concession speech across town. Terry congratulated Ashford on his win and reflected on 16 years representing Nebraska’s 2nd District.

“It’s an honor that I take to heart and will stay with me for the rest of my life, and I’m very thankful for that opportunity,” Terry said.

And so the curtain falls on a grueling congressional campaign that featured heavy spending from both national parties, waves of negative advertising and finally an election-night cliffhanger.

As the votes were tallied Tuesday night, Ashford found himself with a lead, but it remained close enough that Terry opted against an election-night concession.

The challenger was still in front when election workers finished their counting well into the early-morning hours of Wednesday.

And it quickly became clear the math simply wasn’t going to work out for Terry. Ashford led by 4,100 votes pending Friday’s count of about 15,000 early ballots.

That makes it extremely unlikely that enough of them will break toward Terry to overcome his current vote deficit.

Of the early ballots that remain to be counted, Phipps said about half were cast in person at the Election Commissioner’s Office, and half were mailed in.

“So I would assume it will even out’’ when those ballots are counted Friday, Phipps said.

Ashford becomes the first Democrat to represent the Omaha-based 2nd District since Peter Hoagland lost a re-election bid in 1994.

For the 64-year-old Ashford, winning a seat in Congress fulfills a longtime dream that dates to his college days, when he interned on Capitol Hill.

Twenty years ago, Ashford failed in a bid for the 2nd District seat.

Ashford has changed parties repeatedly during his political career. He grew up as a Republican, then switched to the Democratic Party in the early 1980s. His first run for Congress in 1994 was as a Republican. In 2013, he ran unsuccessfully for mayor as an independent.

Wednesday, Ashford stood on his porch with his wife and children as he thanked all of the campaign workers who got him across the finish line in the congressional race. He also praised Terry for his public service.

Ashford said the election marks “a new chapter” for the district and described Nebraskans as hungry for change.

Nebraskans have a history of working across party lines to get things done, he said.

“We are going to take that tradition to Washington,” Ashford said.

Just then a deep rumble of thunder burst overhead.

“I know it’s going to be hard,” Ashford quipped.

He’s right about that. The Nebraska Legislature is a far cry from Capitol Hill, where party leaders rule with an iron fist and Ashford’s Democrats represent a shrinking minority.

He acknowledged that Democrats lost House seats on Tuesday and control of the Senate flipped to Republicans.

“I may have to find 50 friends, but I’m OK with that,” Ashford said. “I’m OK with finding 50 friends because the solutions to this country’s problems are nonpartisan.”

Pressed by reporters on whether that mindset is naive, Ashford insisted that he’ll be able to get results where others have failed.

Asked to name any GOP lawmaker he can work with on Capitol Hill, Ashford went straight to the top and said he would seek a meeting with House Speaker John Boehner, R-Ohio.

As Terry spoke at his campaign headquarters, his wife, Robyn, and father Lee Terry Sr. stood nearby.

He did not take questions from reporters and made it clear he had no interest in picking over the results.

“The one question that you’re probably asking is ‘Geez, why did this campaign lose?’ and after deep, intensive analysis we’ve come to this conclusion: Brad Ashford got more votes than I did,” Terry said, giving a flash of his trademark sense of humor.

Instead, Terry’s mind traveled back to a happier election night back in 1998, when Omaha-area voters first sent the fresh-faced young city councilman off to Washington.

He talked about his statements at that time about restraining federal involvement in local education policy and said he has tried to make good on those promises.

He said he remains frustrated at the nation’s level of debt, but he is proud of his efforts on behalf of a balanced budget amendment.

And the champion of the Keystone XL pipeline touted his efforts to promote national energy independence.

“Energy independence is one of those areas that my record will stand for itself over the years and the number of bills that I have passed and gotten into law that’s going to help us on that road to energy independence,” Terry said.

He referred to working for constituents on a wide range of issues, including straightening out the mess that arises when the bureaucracy mistakenly classifies people as deceased when they are very much alive.

“We’ve helped raise a few people from the dead,” Terry said. “Not in a Lazarus-Jesus way, but in a Social Security way.”

Terry said he has always tried to do what was right for the country.

“Being a member of Congress frankly is a large responsibility,” Terry said. “You have the weight of the nation on your shoulders.”

That weight will soon be on Ashford’s shoulders.

The push to increase the minimum wage also helped Ashford to his win in the race for Congress, as did Lee Terry’s eroding GOP base.

“We want to get it done just as much as everyone else, but we want to make sure we do it accurately,” Dave Phipps said Wednesday about vote counting.

His successor, Brad Ashford, also is a supporter and expects the pipeline to be built sooner rather than later.

Lee Terry was clinging to his political life early Wednesday as his congressional battle with Democrat Brad Ashford turned cliffhanger. Ashford held a narrow lead, and it appeared that the trending math favored the challenger.

Drought causes French river to be crossable by foot

Man acquitted in deaths of 7 motorcyclists

Man acquitted in deaths of 7 motorcyclists

Joined by his wife and father, Republican Lee Terry gives his concession speech after a close race for the 2nd District seat from his campaign office in Omaha on Wednesday.