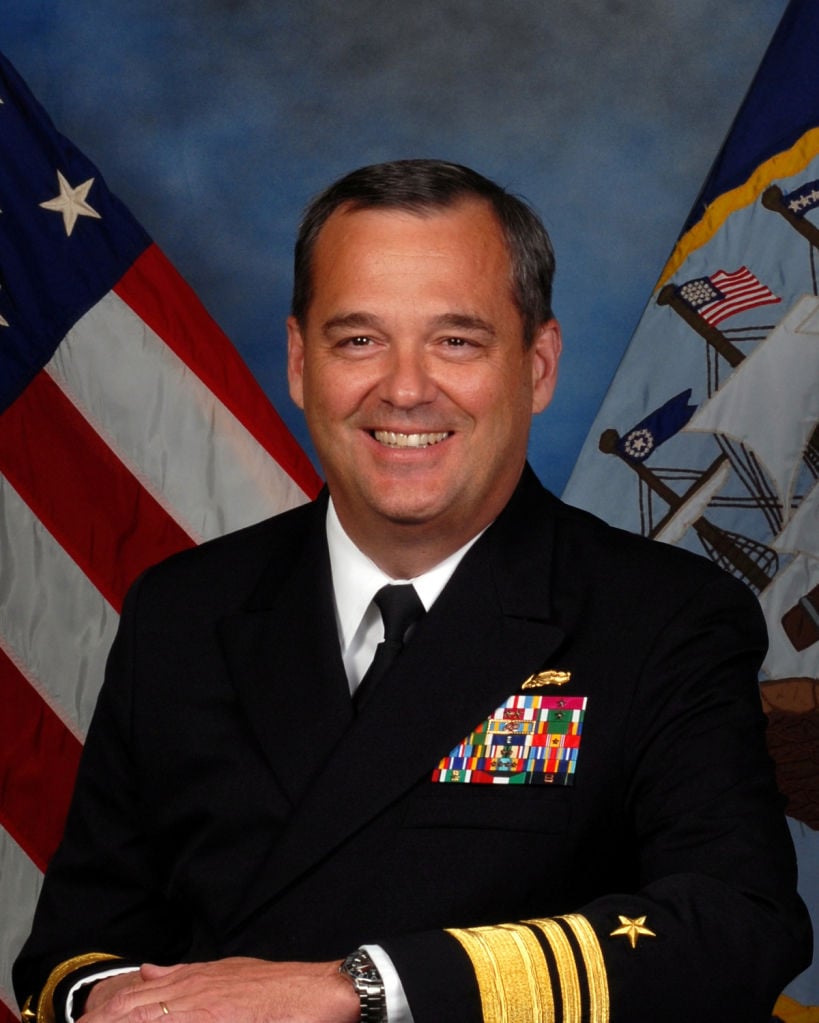 Vice Adm. Tom Copeman has served for 32 years and was back in Omaha for Navy Week. 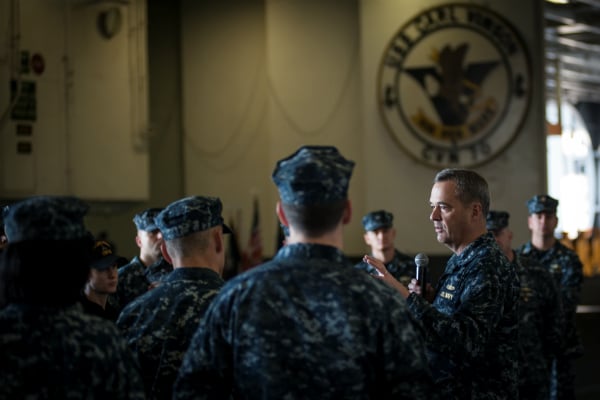 Vice Adm. Tom Copeman, shown earlier this year, was an action officer at the U.S. Strategic Command in Nebraska between tours at sea. 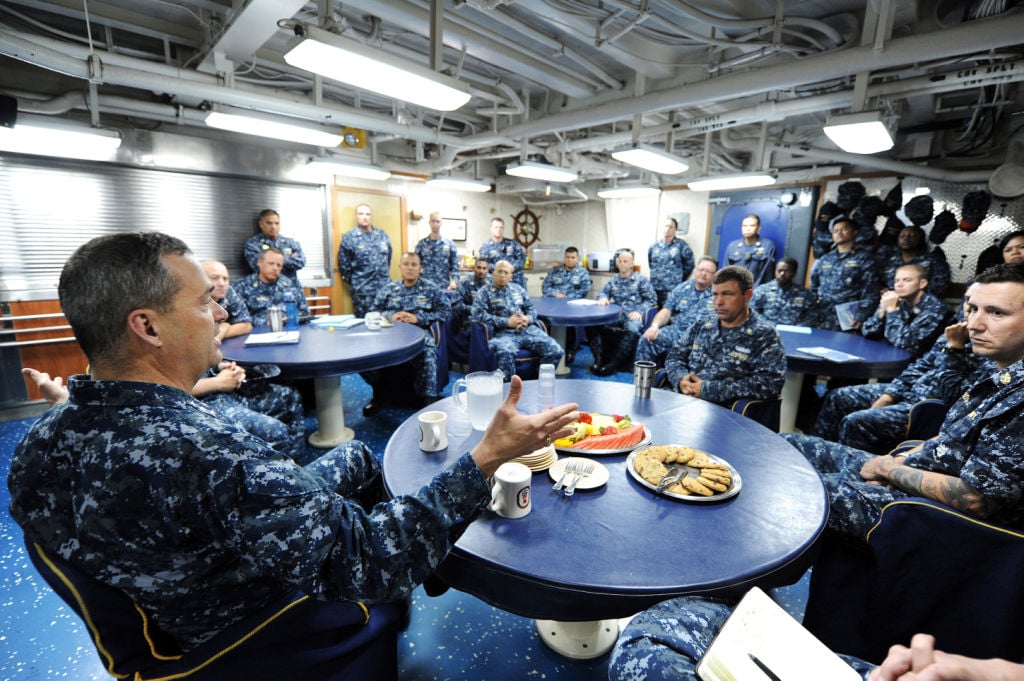 Vice Adm. Tom Copeman, commander of Naval Surface Forces, speaks aboard the USS Chosin during a visit to Joint Base Pearl Harbor-Hickam in Hawaii. Copeman graduated from high school in Hawaii.

Vice Adm. Tom Copeman’s work involves sailing the seven seas. But this past week, at least, he had Nebraska on his mind.

During a 32-year Navy career, Copeman, 55, has risen to the leadership of the Naval Surface Forces command in San Diego. That puts him in charge of all Navy warships except submarines and aircraft carriers.

Not bad for a Creighton University graduate who had difficulty getting into medical school after earning his degree in biology. So he followed his father and grandfather — veterans with a combined 50 years of service — into the Navy.

“I went right to the recruiter down on 72nd Street, by Ak-Sar-Ben, and signed up,” Copeman said last week.

He was in Nebraska for Navy Week, a series of events designed to showcase the Navy in a region far from the ocean. Copeman’s job was to talk with Nebraska leaders about why the Navy is important here in the Midwest.

He notes that agricultural businesses based in Omaha ship goods overseas, along routes patrolled by Navy ships. Union Pacific’s trains, too, haul vast numbers of products that have traveled by ship to U.S. ports.

“We’re out there covering the 70 percent of the world that’s not terra firma,” Copeman said. “If we’re not out there protecting the sea lanes, who will?”

He grew up in an itinerant Navy family during the Cold War. His father, a Navy surface warfare officer, was assigned to Honolulu in 1977, when Copeman graduated from the Punahou School. Barack Obama graduated from the same school two years later, although they barely knew each other.

Copeman moved to Creighton for college. It wasn’t such a stretch. His mother’s relatives had come from Nebraska, and a few of them still live here, near Stuart and Atkinson.

He was taken with the warmth and friendliness he found in Omaha.

“You have the ‘aloha’ spirit in Hawaii,” Copeman said. “You don’t call it that here, but there’s a similar friendly feeling in Nebraska.”

In the Navy, he joined the surface warfare branch (the other branches are submarines and aviation), which he calls “existential to the Navy.”

He served aboard cruisers and destroyers, including a tour as the engineering officer aboard the USS Philippine Sea during the first Gulf War, and another as commanding officer of the USS Benfold.

Copeman’s naval career brought him back to Nebraska in 1992, when he started work as an action officer in the Current Operations Directorate at the U.S. Strategic Command — the same week it replaced the Cold War-era Strategic Air Command.

During that tour, his son was born at Midlands Hospital in Papillion. Twenty years later, his son now is back in Omaha as a Creighton student.

Copeman went on to command a destroyer squadron that deployed with the USS George Washington carrier strike group in the Arabian Sea during the Iraq and Afghanistan Wars. He later headed Joint Task Force Guantánamo Bay, which oversees the handling of detainees at the U.S. Navy base in Cuba.

Now Copeman is just a few weeks from wrapping up two years in command of Naval Surface Forces. During his tour, he’s coped with an acute shortage of sailors that has left the fleet understaffed by 15 percent. He described fixing that problem as “my No. 1 priority.”

He has also dealt with the growing pains of the Navy’s new littoral combat ship, which has suffered both cost and performance problems. Four have been delivered, and the first one, USS Freedom, suffered numerous breakdowns during its first 10-month cruise last year.

Copeman dismissed those problems as being typical for the first deployment of a new ship class, and he said he still likes the idea of a ship that operates easily in shallow-water zones.

“They stay out (at sea) three times as long, and they cost four times less,” he said. “This ship, with a 70-man crew, was able to do everything a bigger ship with 350 sailors could do.”

After Copeman retires, Omaha is likely to continue to be his home away from home. He’s kept a lot of close friends here — including Creighton’s current and former presidents, the Rev. Timothy Lannon and the Rev. John Schlegel, who were both fraternity brothers.

“Every couple of years, I come back,” he said.

Correction: A previous version of this story incorrectly stated what Copeman’s father did in the Navy.

Amid an increase in complaints from nearby businesses and residents, police have cleared an encampment on private land  north of downtown Omaha used by homeless people.

Authorities allege that a former Waterloo firefighter drugged a woman's drink with a substance that led her to be incapacitated and then sexually assaulted her.

The 140-member band performed "All Aboard!" at Buell Stadium in Millard to earn an uncommonly high score of 90.25, director Joe Homan said.

The proposal would drop Emily Ethington's pay as election commissioner in 2022 to $72,753. That's 16% less than the current salary.

Arson suspected in fire at Jesse's Place in North Omaha

A North Omaha bar was heavily damaged by a fire early Sunday that was determined to have been intentionally set.

Shantel Thompson, 33, is still recovering in the hospital after being shot in the spine at Standing Bear Lake earlier this month.

Human remains have been found near the home of a Plattsmouth man who has been missing for more than a year, authorities said Wednesday.

Vice Adm. Tom Copeman has served for 32 years and was back in Omaha for Navy Week.

Vice Adm. Tom Copeman, shown earlier this year, was an action officer at the U.S. Strategic Command in Nebraska between tours at sea.

Vice Adm. Tom Copeman, commander of Naval Surface Forces, speaks aboard the USS Chosin during a visit to Joint Base Pearl Harbor-Hickam in Hawaii. Copeman graduated from high school in Hawaii.