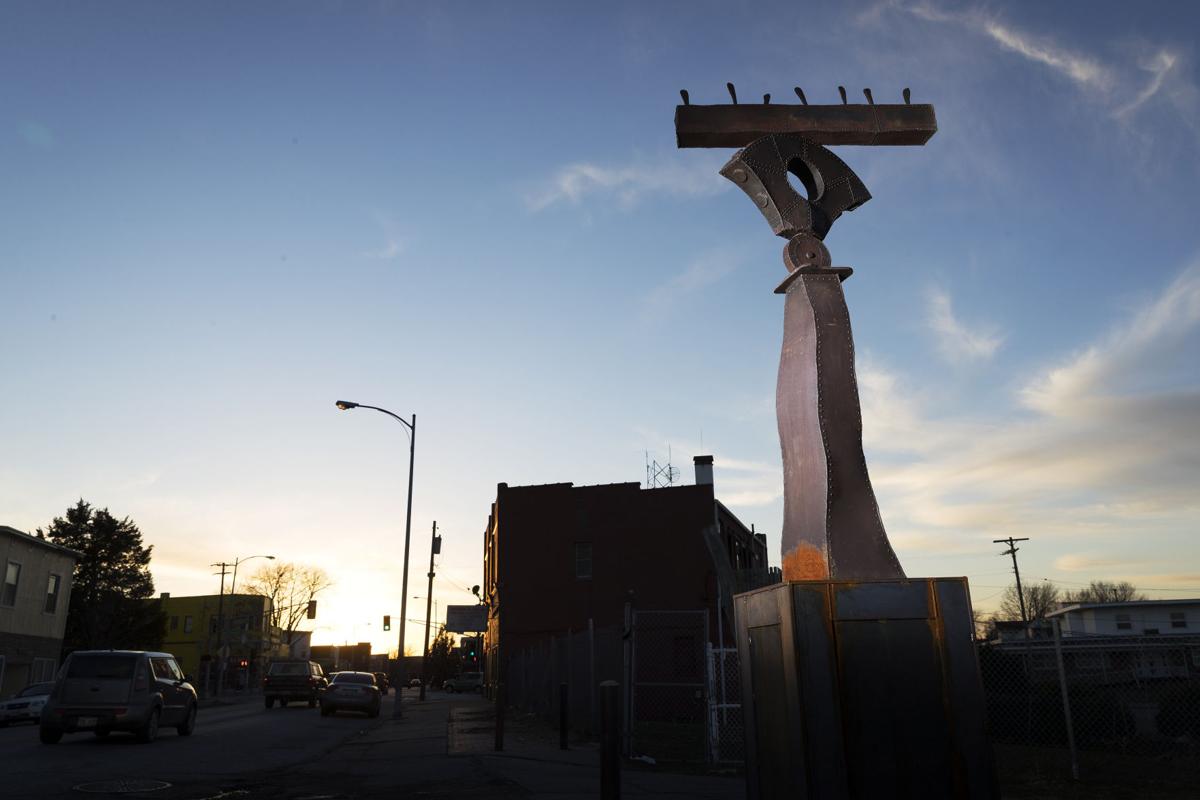 Prairie Sun is one of two sculptures by Omaha artist Paul Konchagulian recently installed at both ends of the Vinton Street business corridor. It stands at 15th and Vinton. 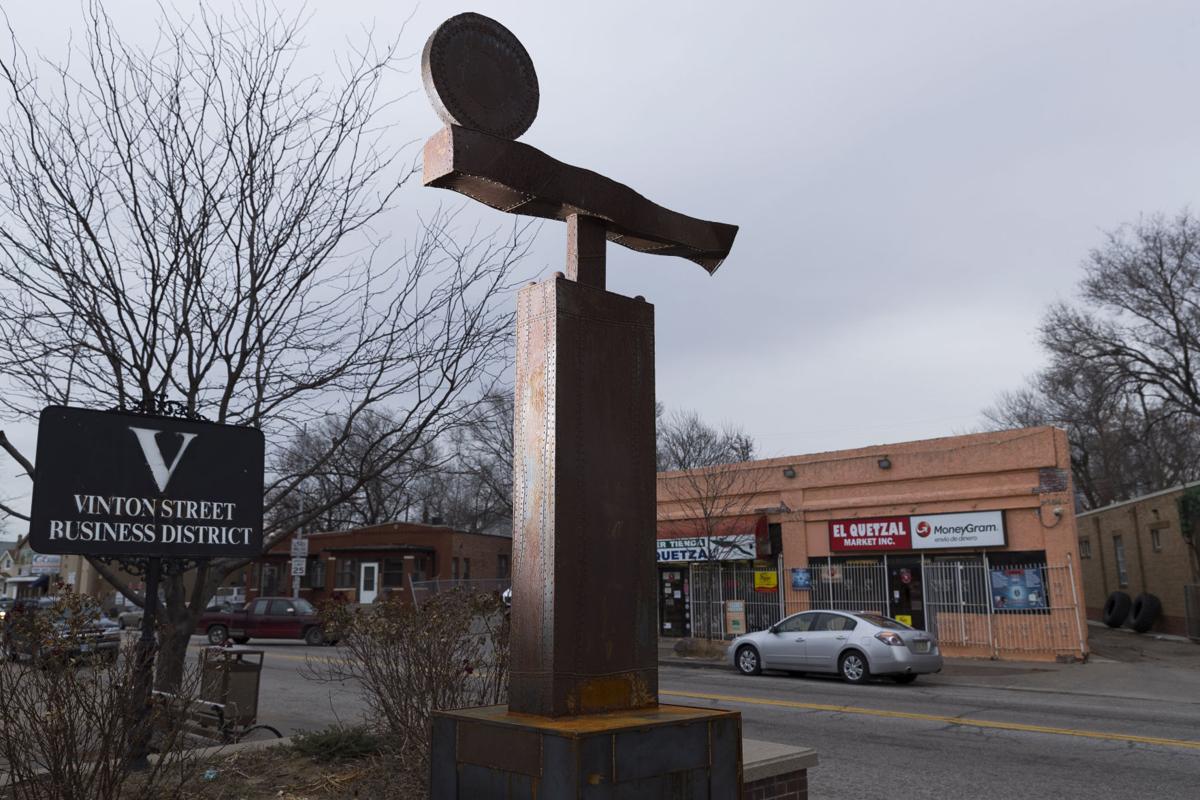 Prairie Moon is one of two sculptures by Omaha artist Paul Konchagulian recently installed at both ends of the Vinton Street business corridor. It stands at 20th and Vinton.

By Tess Williams / For the World-Herald

Vinton Street is in the middle of a transformation.

In the last few years, the historic business district has made it a priority to revitalize the area and create a booming arts corridor. The next step for the district was adding public art.

Check that step off the list. Two sculptures, which were selected in October, were installed just before Christmas.

“We’re putting one on each end of the business district so that they could act as bookends and we can fill in the pages as more money comes along,” said Larry Ferguson, chairman of the Omaha Public Art Commission.

Omaha By Design sent out a request for artist submissions in October, and two weeks later nearly 60 community members looked over 23 proposals.

The group gathered at the Apollon art space at 18th and Vinton to vote on favorites. A selected committee of 10 then took into account the votes and considered technical details, like safety, maintenance and cohesion with existing neighborhood structures.

But the Prairie works are the first in a series created by Konchagulian after a year-long recovery from triple bypass surgery. The large-scale metal sculptures, featuring abstract works atop a large pedestal, represent the fact that “I made it!” he said.

Konchagulian was excited about the vision for the Vinton Street area.

“Other neighborhoods have different things, like Benson has really focused on bars and becoming a place to go out,” he said, “but Vinton’s concentration is art, and that’s something that hasn’t been done in other neighborhoods.”

“It’s the beginning of reinforcing the sense of place that Vinton wants to create,” she said. “It’s really going to say, ‘This is where an art area starts.’ ”

Ferguson, who owns a photography studio on Vinton Street, said that the neighborhood is nearly unrecognizable from when he opened his shop in 1987.

“It was a dying neighborhood,” Ferguson said. “The inhabitants were keeling over, they were all in their 70s, 80s, 90s, they were getting older, so there was a ton of vacant housing and empty business storefronts.”

Now, he said, the neighborhood is filled with thriving businesses and there’s even a wait list to open new businesses on the street.

He credits that in part to the revitalization efforts on Vinton Street over recent years. Omaha By Design helped to classify the area as a Neighborhood Conservation and Enhancement overlay district, which preserves the neighborhood’s historic style. The organization also launched the Vinton Street Project in 2012 to help the district establish itself as a commercial hub and an arts center.

In 2014, the Omaha City Council approved grant funding and private donations to be used to repair and renovate existing homes in the neighborhood, which includes the Vinton Street business corridor.

The community launched the Vinton Street Creativity Festival in 2013 to further enliven its art scene. The festival now takes place every summer. Ferguson said that the district also sees hundreds of visitors each month for Friday 2, the when local galleries are open and often showcase new exhibits.

“Vinton Street has always been a commercial district, sometimes more vibrant than others, but right now it is more vibrant than it has been in a long time,” said Reilly. “And I think it’s just going to go up from here and keep growing and improving.”

When Dana Cowen came to the Joslyn Art Museum in February 2015, a big part of her role as the associate curator of European art was the complete reinstallation of the museum’s European collection.

Such millennial-heavy makers colonies can help centralize a community with a creative bent and a focus on providing fledgling entrepreneurs a home to produce and sell goods and inventions.

In north downtown, businesses hope new projects can create a more neighborly part of the city

Business owners who planted early flags in the once-dilapidated area say the hope for a more cohesive neighborhood has been a long time coming, and now it could become a reality.

A changing Park Avenue: Grocery owner, in an about-face, sells to developer

When anyone wanted to get the 4-1-1 on midtown Omaha’s Park Avenue, all roads led to Mary Ann Caniglia.

‘I have to let it go’: Gallery 72 owner is selling works from his parents' collection, including a Matisse

A blue print by Matisse is among hundreds of pieces for sale in the collection of Bob and Roberta Rogers, longtime owners of Gallery 72. About 60 of those works, including the Matisse, will make up a new show opening Friday at the gallery.

Dave Paladino, of Landmark Group real estate, joins a growing number of local developers amassing multiple parcels — even entire corridors and neighborhoods — to better control, brand and transform older pockets of Omaha into the next hot spots for shopping, dining, living or all of the above.

Prairie Sun is one of two sculptures by Omaha artist Paul Konchagulian recently installed at both ends of the Vinton Street business corridor. It stands at 15th and Vinton.

Prairie Moon is one of two sculptures by Omaha artist Paul Konchagulian recently installed at both ends of the Vinton Street business corridor. It stands at 20th and Vinton.