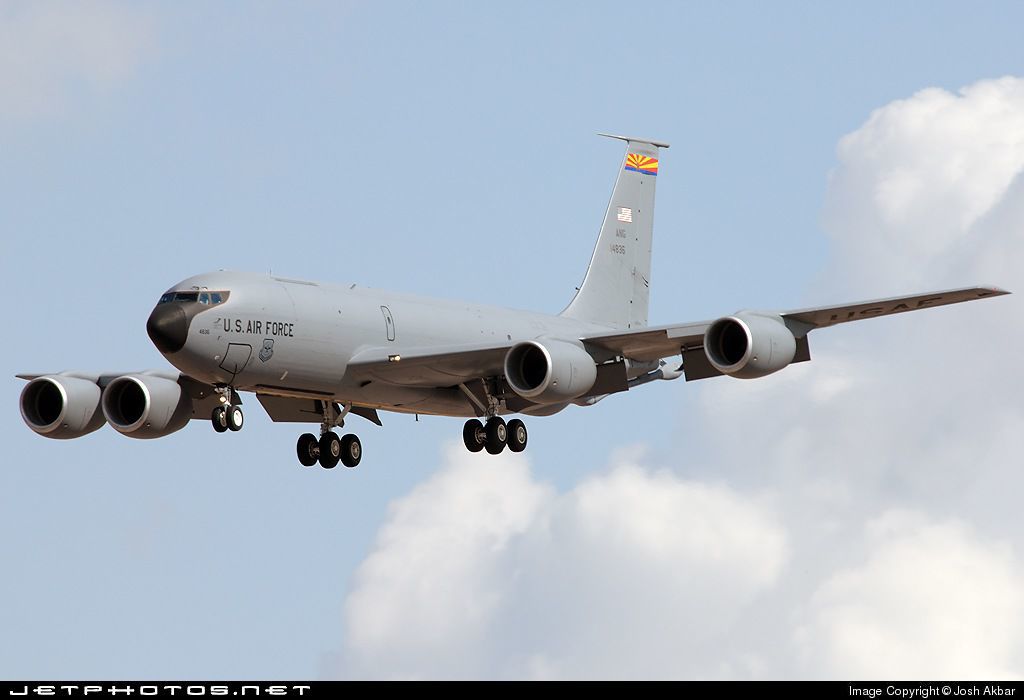 The Air Force has begun a project to convert three National Guard refueling tankers into WC-135R aircraft for its “nuke-sniffing” radiation detection mission. This jet is expected to be the first one converted, with delivery slated for 2022. 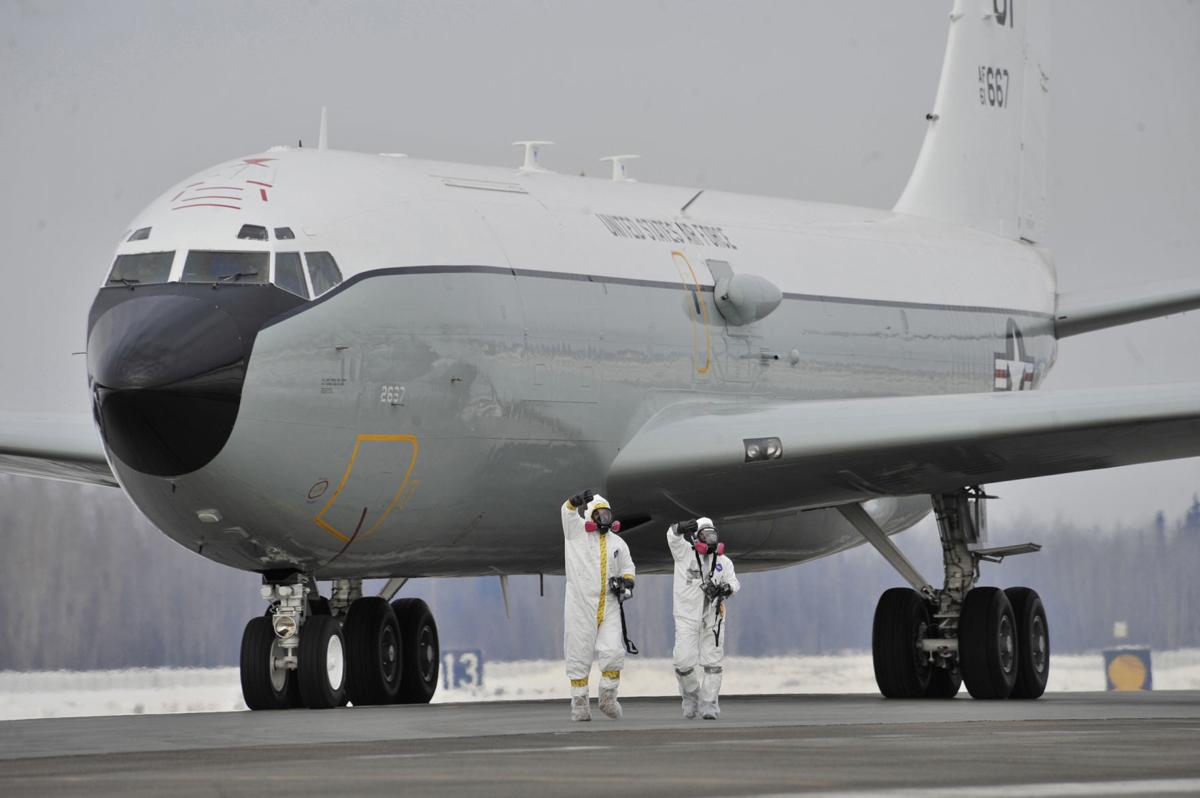 One of the 55th Wing's WC-135 Constant Phoenix radiation-detection jets is examined in 2011 after a flight near Japan's Fukushima nuclear reactor, which suffered a meltdown after an earthquake and tsunami. The Air Force has begun a project to convert three National Guard refueling tankers for the mission by 2023, and scrap the two existing ones. 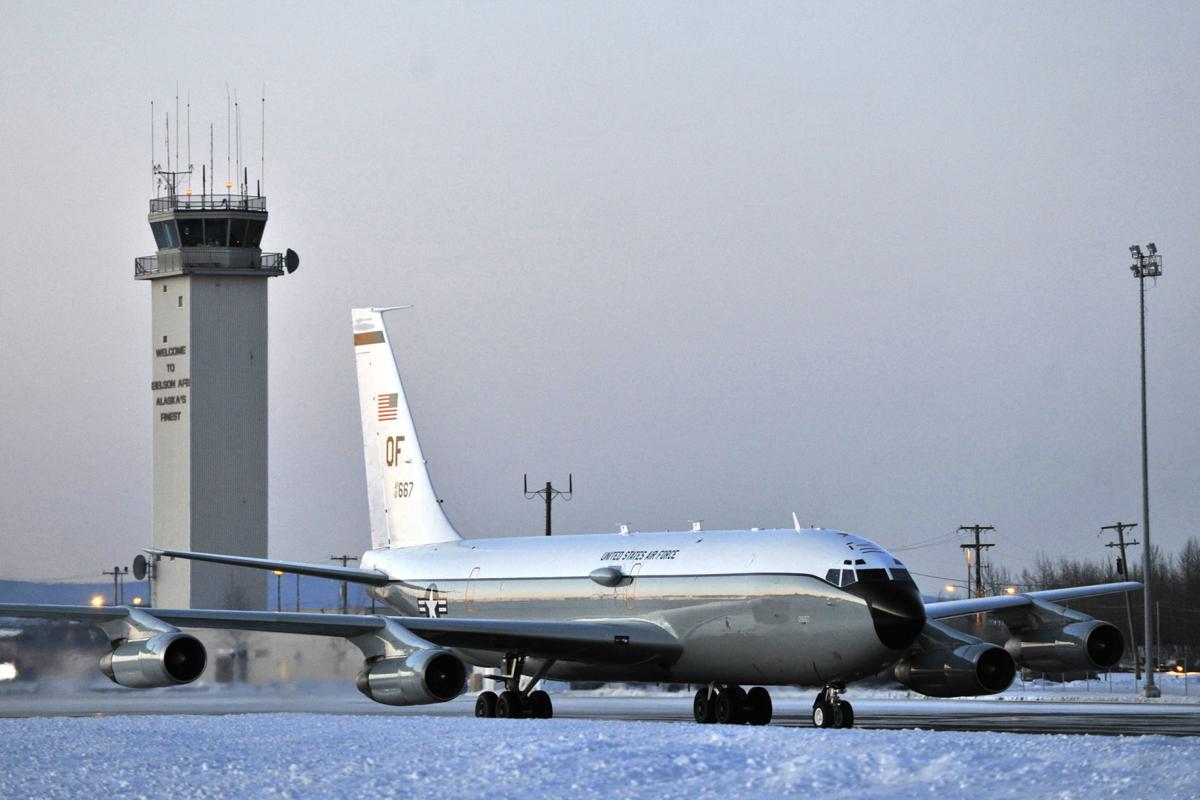 The Air Force is seeking $208 million to replace two breakdown-prone WC-135 jets from the 55th Wing with three aerial-refueling tankers refitted for the planes' nuclear detection mission. In this 2011 photo, one of the WC-135s is shown on the ramp at Eielson Air Force Base in Alaska.

Replacements are on the way for two decrepit 55th Wing jets that give the Air Force critical information about nuclear detonations in North Korea and elsewhere in the world.

The giant defense contractor L3Harris and the Air Force’s “Big Safari” acquisitions group are scheduled to start in May converting the first of three former Air National Guard fuel tankers into WC-135R radiation-detection aircraft. Work will start on the other two next year.

When they’re finished, all three aircraft will be assigned to the 55th Wing at Offutt Air Force Base. The first is scheduled for delivery in 2022, said Maj. Malinda Singleton, an Air Force spokeswoman, with the other two following in 2023.

“The world needs this capability to sense nuclear tests,” Bacon told The World-Herald.

During the conversions, the long refueling booms will be removed from the former KC-135R tankers, Singleton said. The avionics and flight systems will be upgraded to match the RC-135 Rivet Joint and Cobra Ball aircraft already in the 55th Wing fleet at Offutt.

They will be equipped with sensing pods on each side of the fuselage, over the wing. Filters inside the pods capture tiny particles from the nuclear blast, giving analysts critical information about the composition of the bomb or other radiation source.

“There are a number of intelligence items you can only get from atmospheric particles,” said Hans Kristensen, director of the Nuclear Information Project at the Federation of American Scientists. “If you can get the bomb components, you can get a wealth of data.”

The planes will also be equipped with compressors that channel air samples into tanks for further study. Each conversion is expected to take almost 24 months.

The aircraft are part of a mission called Constant Phoenix, which traces its roots back to the late 1940s.

In 1949, fallout from the first Soviet nuclear test was detected by an Air Force WB-29 weather plane, according to “The Boeing KC-135 Stratotanker: More than a Tanker,” a 2017 history by Robert Hopkins III, a former 55th Wing recon pilot.

During the Cold War, a series of aircraft types flew the missions frequently over the Pacific and Arctic Oceans. In the mid-1960s, the Air Force converted 10 former C-135B transport planes for Constant Phoenix, which came to be called the “nuke sniffing” mission. The prefix “W” was added to their name because they also collected weather data.

Hopkins said the newly named WC-135s could fly much longer and much higher than previous types.

“It doesn’t have to fly into hostile territory,” Hopkins said. “They can tell you everything you need to know about the bomb, and the level of sophistication.”

For decades, the Offutt-based Strategic Air Command used them to monitor compliance with the 1963 Nuclear Test Ban Treaty. One was used to monitor fallout from the 1986 nuclear disaster at Chernobyl, though it later had to be scrapped in part because of residual radiation.

After the fall of the Soviet Union, then-Air Force Chief of Staff Gen. Merrill McPeak moved quickly to retire them.

“McPeak was determined to get rid of everything SAC,” Hopkins said. “They started just dragging them off to the boneyard.”

But the rise of China as a nuclear power, and the 1998 nuclear standoff between India and Pakistan, made it clear there was still a need for “nuke sniffers.” That was reinforced by North Korea’s unsettling development of nuclear weapons.

Today, the 55th Wing’s 45th Reconnaissance Squadron operates two WC-135s, which were built in 1961 and 1962. They are among the oldest jets in the Air Force, and have not received the same upgraded engines and flight systems as the 55th Wing’s RC-135s.

The 55th Wing allows only very experienced pilots to fly the current WC-135s because of their old-fashioned flight controls and engines, a noisier, smokier, gas-guzzling motor last produced in 1985. They break down frequently.

In 2017, an engine on one of the planes caught fire on a flight from the remote Indian Ocean island of Diego Garcia and Okinawa, Japan. After a frightening descent, the plane made a safe emergency landing at a civilian airport in Banda Aceh, Indonesia. It was sidelined there for repairs for more than a week.

“The current airplanes are old. They are wearing out,” Gen. David Goldfein, the Air Force chief of staff, told the Senate Armed Services Committee in April 2018. “Our mission-capable rates and, more importantly, our aircraft availability rates to be able to do this mission are much lower than not only the secretary of defense but the combatant commanders require.”

Hopkins said the three KC-135s selected for conversion rolled off the Boeing assembly line in August and September 1964 — which means they are among the youngest of that type. Each has about 25,000 to 27,500 flight hours, Singleton said, compared with between 29,500 and 36,000 for the two current Constant Phoenix jets.

Though only two to three years newer than the aircraft they replace, all three were upgraded with new, quieter, turbofan engines in the early 1990s, and are equipped with newer avionics and flight controls. That means most any 55th Wing pilot will be able to fly them.

All have served most recently as National Guard tankers, which Hopkins said means they are in better shape than the 55th Wing workhorses. He said Guard tankers typically rack up fewer flight hours and are maintained by National Guard mechanics who care for the same aircraft for years, unlike in the active-duty Air Force.

“Offutt flies their jets hard,” he said. “Airplanes that come out of the Guard and Reserve have been pampered.”

Hopkins has criticized the Air Force for failing to fund new reconnaissance aircraft, but he does believe refitting the aged tankers is the right move now.

Flight training and parts replacement will be simplified because the cockpit, engines and airframes will be the same as all but two other 55th Wing jets.

Bacon said he is glad to see the planes coming into the pipeline.

“The world situation tells us we need these,” Bacon said. “We might as well go out and get it done.”

Offutt Air Force Base is named for Lt. Jarvis Offutt — the first airman from Omaha killed in World War I.

The Air Force has started a program to replace the four E-4B Nightwatch jets — also known as the National Airborne Operations Center — within 10 years. The Trump administration is looking to spend more than half a billion dollars over the next five years developing the new plane.

The House of Representatives is pushing back this week against the Trump administration's under-the-radar efforts to pull the United States out of the Open Skies Treaty.

Severe storm roared through Sarpy County about 11 p.m., adding to the problems caused at Offutt by last month's floods.

Airfield reopens for planes at Offutt; flooding did no long-term damage to runway, taxiways

Several planes returned to Offutt Thursday, but the 55th Wing declined to say how many.

Persistent mechanical problems may plague the 55th Wing's half-century-old fleet of reconnaissance jets, but the Air Force is in no hurry to buy new ones. It plans to squeeze 30 more years out of the Offutt-based C-135s.

The Air Force is seeking $430 million to pay for five aircraft to replace Offutt-based planes that were built in the 1960s and lately have been plagued by maintenance difficulties.

Dau Nguyen, who now lives in Lincoln, is one of 125,000 to 150,000 South Vietnamese refugees who fled the country 45 years ago this week as its army collapsed under an onslaught from communist forces.

A 55th Wing jet on a training flight made an emergency landing at Offutt Air Force Base Thursday morning.

The Air Force has begun a project to convert three National Guard refueling tankers into WC-135R aircraft for its “nuke-sniffing” radiation detection mission. This jet is expected to be the first one converted, with delivery slated for 2022. 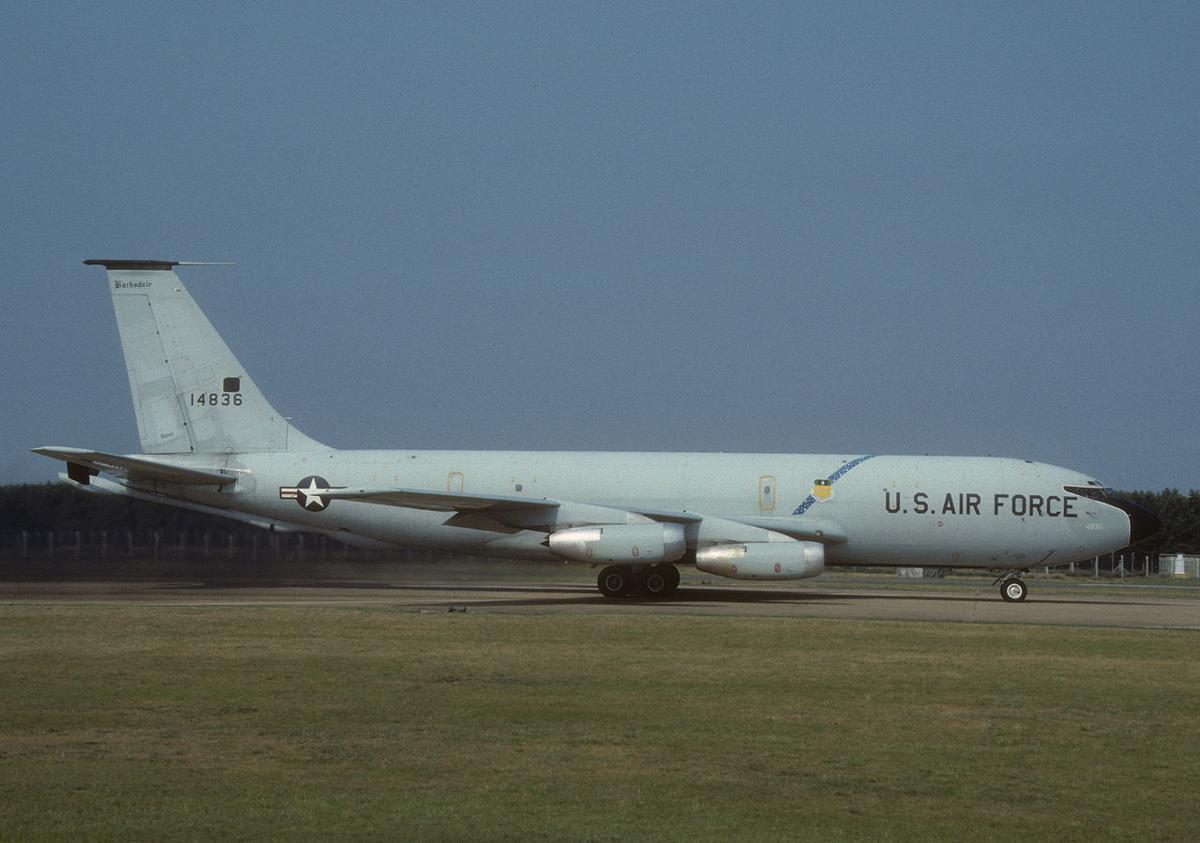 One of the KC-135 tankers slated for conversion as a WC-135R radiation-detection aircraft for the 55th Wing, on a 1990 stop at RAF Mildenhall, England, during Operation Desert Shield.

One of the 55th Wing's WC-135 Constant Phoenix radiation-detection jets is examined in 2011 after a flight near Japan's Fukushima nuclear reactor, which suffered a meltdown after an earthquake and tsunami. The Air Force has begun a project to convert three National Guard refueling tankers for the mission by 2023, and scrap the two existing ones.

The Air Force is seeking $208 million to replace two breakdown-prone WC-135 jets from the 55th Wing with three aerial-refueling tankers refitted for the planes' nuclear detection mission. In this 2011 photo, one of the WC-135s is shown on the ramp at Eielson Air Force Base in Alaska. 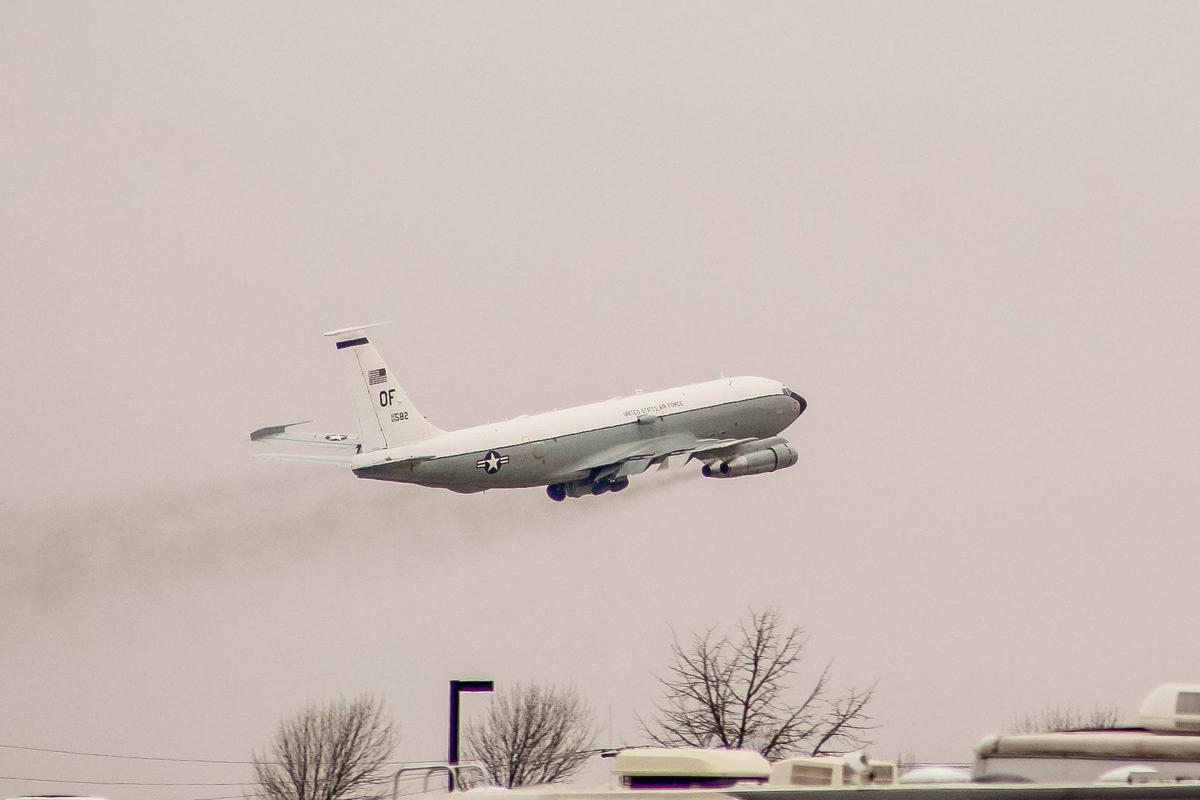 Flight training and other military missions continue at Offutt Air Force Base, but military travel and large gatherings on base are being curtailed. In this photo, one of the 55th Wing’s WC-135 radiation detection aircraft is shown taking off Monday from Offutt.