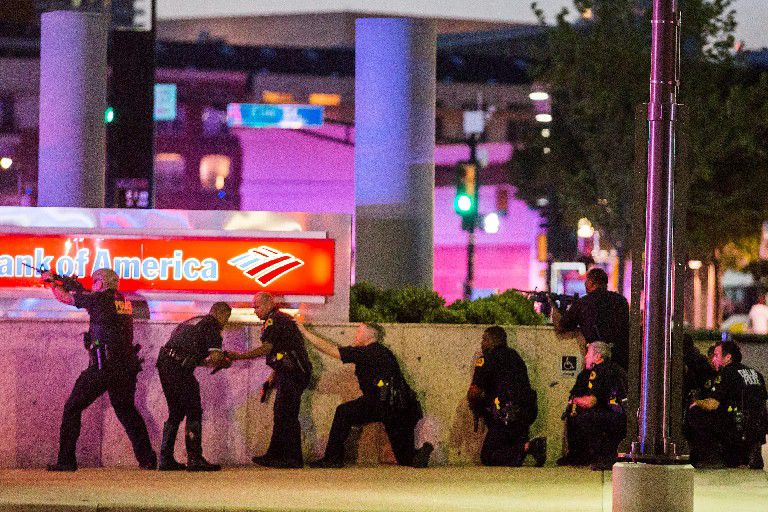 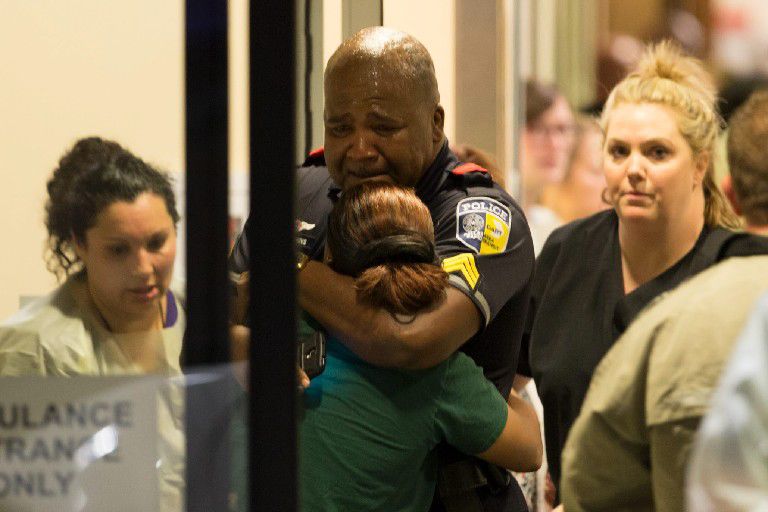 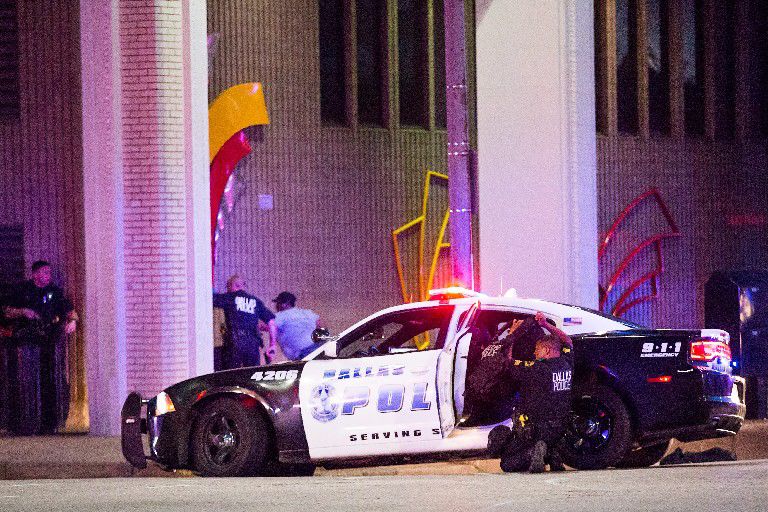 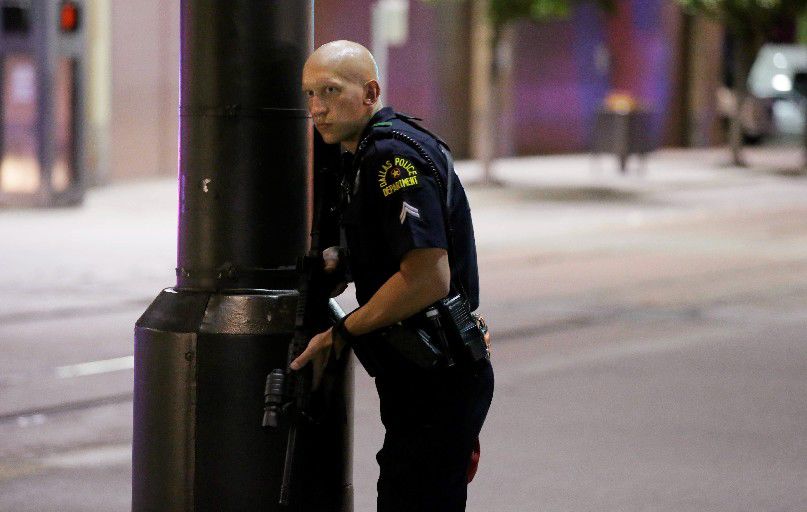 A Dallas policeman keeps watch on a street in downtown Dallas.

By The Associated Press

DALLAS (AP) — An Army veteran killed by Dallas police after the sniper slayings of five officers during a protest march told authorities that he was upset about the police shootings of two black men earlier this week and wanted to exterminate whites, "especially white officers," officials said Friday.

The man identified as 25-year-old Micah Johnson was killed by a robot-delivered bomb after the shootings, which marked the deadliest day for U.S. law enforcement since the Sept. 11, 2001, terrorist attacks. In all, 12 officers were shot.

In Georgia, Missouri and Tennessee, authorities said gun-wielding civilians also shot officers in individual attacks that came after the two black men died at the hands of police in Louisiana and Minnesota. Two officers were wounded, one critically.

Johnson was a private first class from the Dallas suburb of Mesquite with a specialty in carpentry and masonry. He served in the Army Reserve for six years starting in 2009 and did one tour in Afghanistan from November 2013 to July 2014, the military said.

After the attack, he tried to take refuge in a parking garage and exchanged gunfire with police, Police Chief David Brown said.

The suspect described his motive during negotiations and said he acted alone and was not affiliated with any groups, Brown said.

Brown blamed "snipers" for Thursday's attack, but it was unclear how many shooters were involved. Authorities initially said three suspects were in custody and the fourth dead. Hours later, officials were vague and would not discuss details.

Johnson was black. Law enforcement officials did not disclose the race of the dead officers.

The bloodshed unfolded just a few blocks from where President John F. Kennedy was slain in 1963.

The shooting began Thursday evening while hundreds of people were gathered to protest the killings in Baton Rouge, Louisiana, and suburban St. Paul, Minnesota. Brown told reporters that snipers fired "ambush-style" on the officers. Two civilians also were wounded.

Authorities said they were not sure they had located all possible suspects, but attention on Friday quickly turned to the man killed in the parking garage.

A Texas law enforcement official identified him as Johnson. The official spoke on the condition of anonymity because he said he was not authorized to release the information.

Around midday, investigators were seen walking in and out of a home believed to be Johnson's in Mesquite.

None of the other suspects was identified, and the police chief said he would not disclose any details about them until authorities were sure everyone involved was in custody.

Lynch said protesters concerned about killings by police should not be discouraged "by those who use your lawful actions as a cover for their heinous violence."

The other attacks on police included a Georgia man who authorities said called 911 to report a break-in, then ambushed the officer who came to investigate. That sparked a shootout in which both the officer and suspect were wounded but expected to survive.

In suburban St. Louis, a motorist shot an officer at least once as the officer walked back to his car during a traffic stop, police said. The officer was hospitalized in critical condition.

And in Tennessee, a man accused of shooting indiscriminately at passing cars and police on a highway told investigators he was angry about police violence against African-Americans, authorities said.

Video from the scene in Dallas showed protesters marching along a downtown street about half a mile from City Hall when shots erupted and the crowd scattered, seeking cover. Officers crouched beside vehicles, armored SWAT team vehicles arrived and a helicopter hovered overhead.

Demonstrations were held in several other U.S. cities Thursday night to protest the police killings of two more black men: A Minnesota officer on Wednesday fatally shot Philando Castile while he was in a car with a woman and a child, and the shooting's aftermath was livestreamed in a widely shared Facebook video. A day earlier, Alton Sterling was shot in Louisiana after being pinned to the pavement by two white officers. That, too, was captured on a cellphone video.

The Dallas shootings occurred in an area of hotels, restaurants, businesses and some residential apartments only a few blocks from Dealey Plaza, the landmark made famous by the Kennedy assassination.

The scene was chaotic, with officers with automatic rifles on the street corners.

"Everyone just started running," Devante Odom, 21, told The Dallas Morning News. "We lost touch with two of our friends just trying to get out of there."

Carlos Harris, who lives downtown, told the newspaper that the shooters "were strategic. It was tap, tap, pause. Tap, tap, pause," he said.

Video posted on social media appeared to show a gunman at ground level exchanging fire with a police officer who was then felled.

Mayor Mike Rawlings said one of wounded officers had a bullet go through his leg as three members of his squad were fatally shot around him.

"He felt that people don't understand the danger of dealing with a protest," said Rawlings, who spoke to the surviving officer. "And that's what I learned from this. We care so much about people protesting, and I think it's their rights. But how we handle it can do a lot of things. One of the things it can do is put our police officers in harm's way, and we have to be very careful about doing that."

Few details about the slain officers were immediately available.

Four of the dead were with the Dallas Police Department, a spokesman said. One was a Dallas Area Rapid Transit officer. The agency said in a statement that 43-year-old officer Brent Thompson, a newlywed whose bride also works for the police force, was the first officer killed in the line of duty since the agency formed a police department in 1989.

"Our hearts are broken," the statement said.

Theresa Williams said one of the wounded civilians was her sister, 37-year-old Shetamia Taylor, who was shot in the right calf. She threw herself over her four sons, ages 12 to 17, when the shooting began.

After days of sorrow and violence, people across the country mourn and march for police and black lives

Three tumultuous days made clear that a public that elected a black president hasn’t reconciled its fractured history with race, that a country that lived through unrest and assassinations in the 1960s and '70s still bubbles with resentment and rage, and that bloody images of violent tragedy aren’t going away.

The Omaha Police Department released the following statement about the Dallas shootings:

Omaha-area police departments and other officials posted tributes, expressed condolences and voiced resolve to work together with community members Friday, after five police officers were killed and seven wounded by sniper fire at a Dallas protest Thursday.

Organizers said just after 7 p.m. that the protest would probably start breaking up in about 20 minutes. Numbers were dwindling a little by 7:30, but hundreds were still at 120th Street and West Center Road.

A Dallas policeman keeps watch on a street in downtown Dallas.