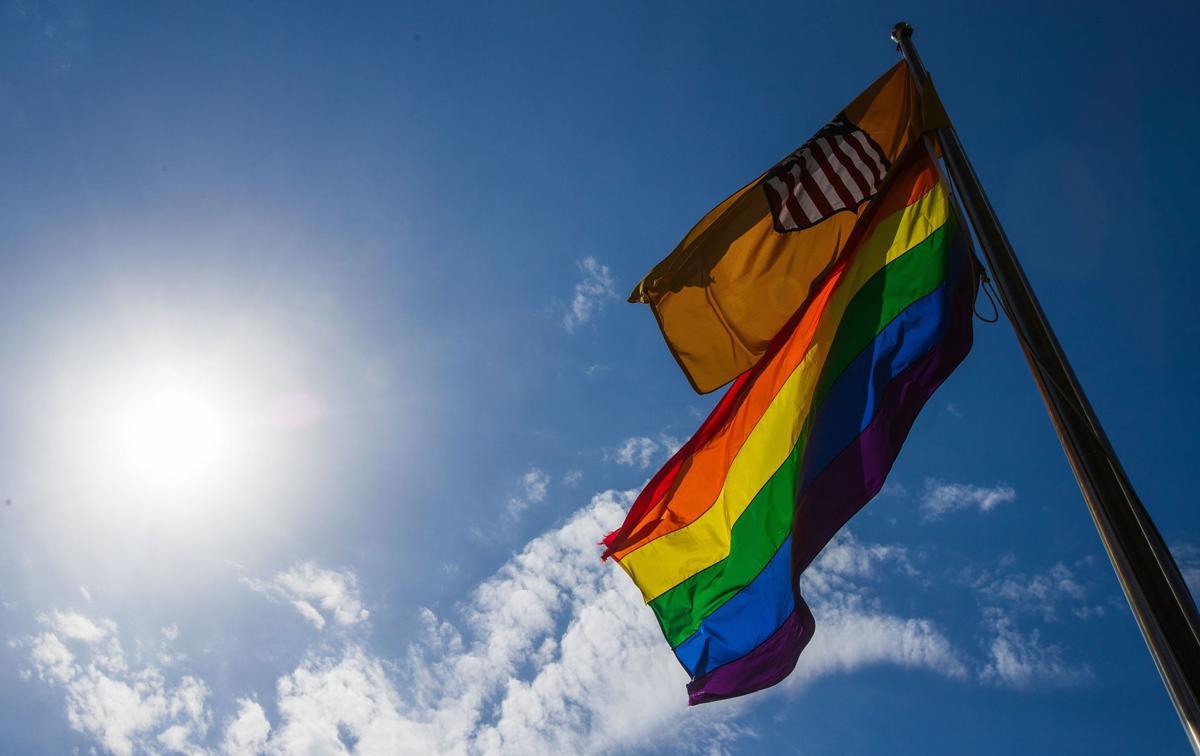 A pride flag flies beneath a Union Pacific flag in front of the company’s headquarters in downtown Omaha on Monday. 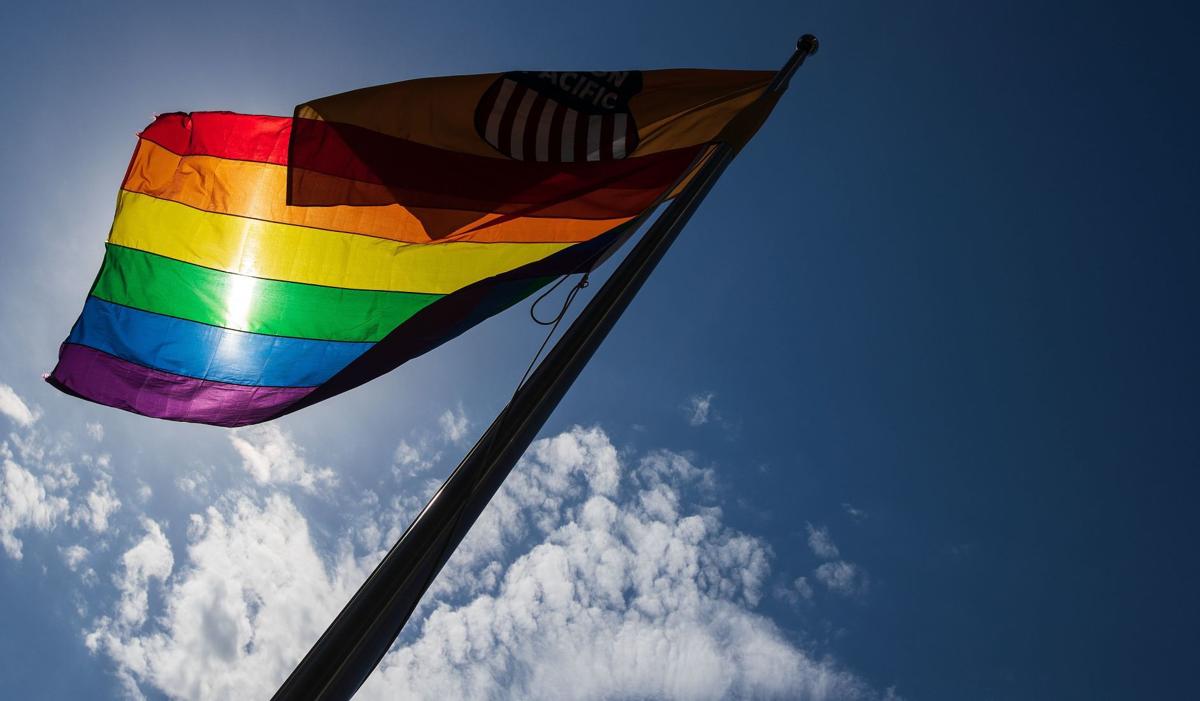 Nebraska rights groups and the Omaha and Lincoln chambers called Monday’s ruling “a turning point for fairness and equality.”

Transgender and gay workers secured a big win Monday in the U.S. Supreme Court, but proponents of changing state law, too, say it’s important that they keep pushing.

State Sen. Patty Pansing Brooks of Lincoln said Monday that she will continue working this summer to pass a bill that would add sexual orientation and gender identity to state employment discrimination law.

“We want to make sure that these protections go to all employees,” said Pansing Brooks, who has backed such legislation without success for several years.

Because the legal system is complex, Pansing Brooks and other advocates said, the work to protect LGBTQ individuals from workplace discrimination isn’t finished. They received a huge boost, though, when the U.S. Supreme Court ruled 6-3 on Monday that those individuals are covered by Title VII of the Civil Rights Act of 1964.

Danielle Conrad, executive director of the ACLU of Nebraska, said the Supreme Court ruling is clear and “applies with equal force across all 50 states.” But it’s still “imperative” for state and local governments to pass laws on the matter, she said, to provide clarity and conformity in laws and to guarantee protection for all LGBT employees.

Businesses of fewer than 15 employees, for instance, aren’t covered by Title VII.

“Today is a turning point for fairness and equality in our nation and Nebraska,” the statement said in part. “Workplaces should be welcoming for everyone, and all workers should feel safe to be our authentic selves.”

Pat Tetreault, director of the University of Nebraska-Lincoln’s centers for women and for the LGBTQA+ community, became choked up while talking about the ruling.

“I think it’s an amazing success that our constitutional rights were upheld,” said Tetreault, who added that she was speaking for herself and not UNL. “It’s good to know that the Supreme Court sees LGBT people as deserving of having the same rights as other people when it comes to employment.”

Pansing Brooks said she has a 31-year-old son who is gay. Protecting his and others’ workplace rights “is the appropriate way to treat our brothers and sisters and neighbors and friends,” she said. This state should embrace everyone, she said, and send the message that “Nebraska is open for business.”

Gov. Pete Ricketts told The World-Herald early this year that the state can remain open to all employees without passing a law explicitly naming the LGBT community. Further, he said, such a law could infringe on the rights of business owners with religious convictions that don’t favor LGBT lifestyles.

Ricketts spokesman Taylor Gage said Monday that the Governor’s Office is “reviewing the extensive decision” by the Supreme Court.

The Supreme Court said Title VII’s exemption for religious organizations is an issue that should be considered by future cases and not this one.

“An employer who fires an individual for being homosexual or transgender fires that person for traits or actions it would not have questioned in members of a different sex. Sex plays a necessary and undisguisable role in the decision, exactly what Title VII forbids,” Gorsuch wrote for the court.

Abbi Swatsworth, executive director of OutNebraska, called the ruling heartening. “There is still, certainly, work to be done,” Swatsworth said. “This protection in the workplace is a huge step forward.”

The outcome is expected to have a big impact for the estimated 8.1 million LGBT workers around the country because most states don’t protect them from workplace discrimination. An estimated 11.3 million LGBT people live in the U.S., according to the Williams Institute at the UCLA law school.

The cases were the court’s first on LGBT rights since Justice Anthony Kennedy’s retirement and replacement by Kavanaugh. Kennedy was a voice for gay rights and the author of the landmark ruling in 2015 that made same-sex marriage legal throughout the United States. Kavanaugh generally is regarded as more conservative.

The Trump administration had changed course from the Obama administration, which supported LGBT workers in their discrimination claims under Title VII.

LGBT discrimination ban to get big push in Nebraska Legislature

During the Obama years, the federal Equal Employment Opportunity Commission had changed its long-standing interpretation of civil rights law to include discrimination against LGBT people. The law prohibits discrimination because of sex but has no specific protection for sexual orientation or gender identity.

In recent years, some lower courts have held that discrimination against LGBT people is a subset of sex discrimination, and thus prohibited by the federal law.

Copyright 2020 The Associated Press. All rights reserved. This material may not be published, broadcast, rewritten or redistributed without permission.

Look back at our best staff photos from June 2020

Frederick Franklin has been an assistant U.S. attorney for 22 years and has served as the president of the Midlands Bar Association, an organization of black attorneys.

Investigators from the Nebraska State Patrol and the Douglas County Attorney’s Office have been examining the actions of Oliver Glass, Dodge County’s top prosecutor since 2011.

Authorities say James Fairbanks wrote an email claiming responsibility for the slaying. The email writer claimed to have shot Mattieo Condoluci after learning that he was listed on Nebraska’s sex offender registry.

Budget cuts would be higher if not for the tuition initiatives that will pump up enrollment, University of Nebraska President Ted Carter said. "This could have been so much worse."

While same-sex couples have become a more ordinary part of society, they still face legal and social difficulties that other couples do not encounter.

Chief Justice John Roberts joined his four more liberal colleagues in ruling that the law requiring doctors who perform abortions to have admitting privileges at nearby hospitals violates abortion rights.

A divided Supreme Court on Tuesday endorsed a Montana tax incentive program that indirectly helps private religious schools, a major victory for those who want to see more public funding of religious institutions.

OPPD joined the City of Omaha, Mutual of Omaha, Union Pacific Railroad and Bank of the West as some of the major local entities showing support for the LGBTQ community.

A pride flag flies beneath a Union Pacific flag in front of the company’s headquarters in downtown Omaha on Monday.

Nebraska rights groups and the Omaha and Lincoln chambers called Monday’s ruling “a turning point for fairness and equality.”