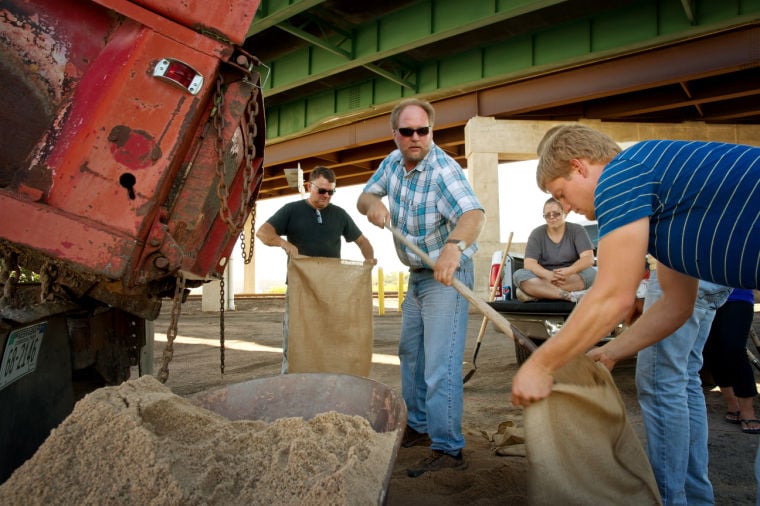 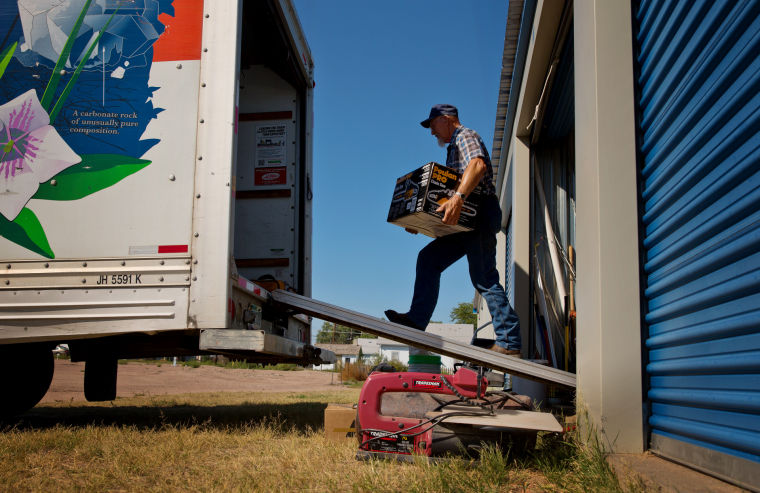 Virgil Lippold of Ogallala moves belongings out of Westside Storage and into a U-Haul as floodwaters approach.

Even though communities have had several days to prepare, there has not been enough time to fully protect them from possibly record flooding along a river that rarely floods. Flood protection systems such as levees and reservoirs simply don't exist on the South Platte.

As a result, local officials are focused on protecting critical infrastructure and telling residents to take responsibility for their own property.

Farmers are bringing in their harvest early, and homeowners are hauling out possessions or moving them to higher ground.

Up and down the river, emergency dikes and sandbags are being used to shore up wastewater treatment plants, sewer lift stations, telecommunications equipment, water supplies and other systems that make a community livable.

“Continuity of government is what we need to make sure happens,” said Dan Guenther, emergency manager in Lincoln County.

Communities along the stretch of the river immediately in the path of flooding are, from west to east: Big Springs, Brule, Ogallala, Roscoe, Paxton, Sutherland, Hershey, North Platte, Maxwell and Brady.

Broken river gauges have prevented officials from getting a good idea of how much floodwater is headed to Nebraska. A much-anticipated Tuesday reading at Julesburg, Colo., fell through because the gauge stopped working.

That will change today.

A crew from Nebraska's Department of Natural Resources has gone to Julesburg to assist with taking manual readings there, said Brian Dunnigan, head of the department.

The river began cresting there Tuesday night and was expected to be at or near the crest through the day today, according to the National Weather Service.

Once the Julesburg reading is done, Nebraska will release inundation maps showing where flooding is most likely to occur, Dunnigan said. Several versions of the maps have been drawn up, and all the state needs is a river reading to know which maps to release, he said.

Assuming that all goes as expected, emergency managers will receive the inundation maps this morning, he said.

River gauges are stationed at Roscoe, North Platte and Brady, and the first crest at one of those gauges is forecast for Thursday at Roscoe, according to the weather service.

Pete Peterson, emergency manager in Keith County, said another problem is that the terrain has changed since 1965, when the last flood of this magnitude occurred on the South Platte.

At that time, Interstate80 hadn't been built yet, and it's unclear to what extent the Interstate embankment will act as a levee or an impediment that accelerates water flow.

“There's not any real history to go by,” Peterson said. “That's where some of the struggle lies with coming up with a good estimate.”

More than 160,000 sandbags have been distributed to the three counties that will be first affected by the flooding, said Al Berndt, assistant director of the Nebraska Emergency Management Agency. Those counties are Deuel, Keith and Lincoln.

Guenther said he has asked for additional sandbags for use in North Platte and other Lincoln County communities.

Kyle Fredin, a meteorologist with the weather service in Boulder, Colo., said the river's rise comes in like a tide: slowly and steadily.

“The gradual increase is what gets people in trouble,” he said. “Before you know it, everything is under water.”

In 1890s Omaha, 'No Man's Land' was one of the oddest places in Douglas County

Clontarf never was incorporated as a village, but functioned like one and wielded political clout larger than its 47 acres. There was a lawless element, too.

Sixteen traffic signals around Omaha are under consideration for removal. Find out which ones here.

Virgil Lippold of Ogallala moves belongings out of Westside Storage and into a U-Haul as floodwaters approach.