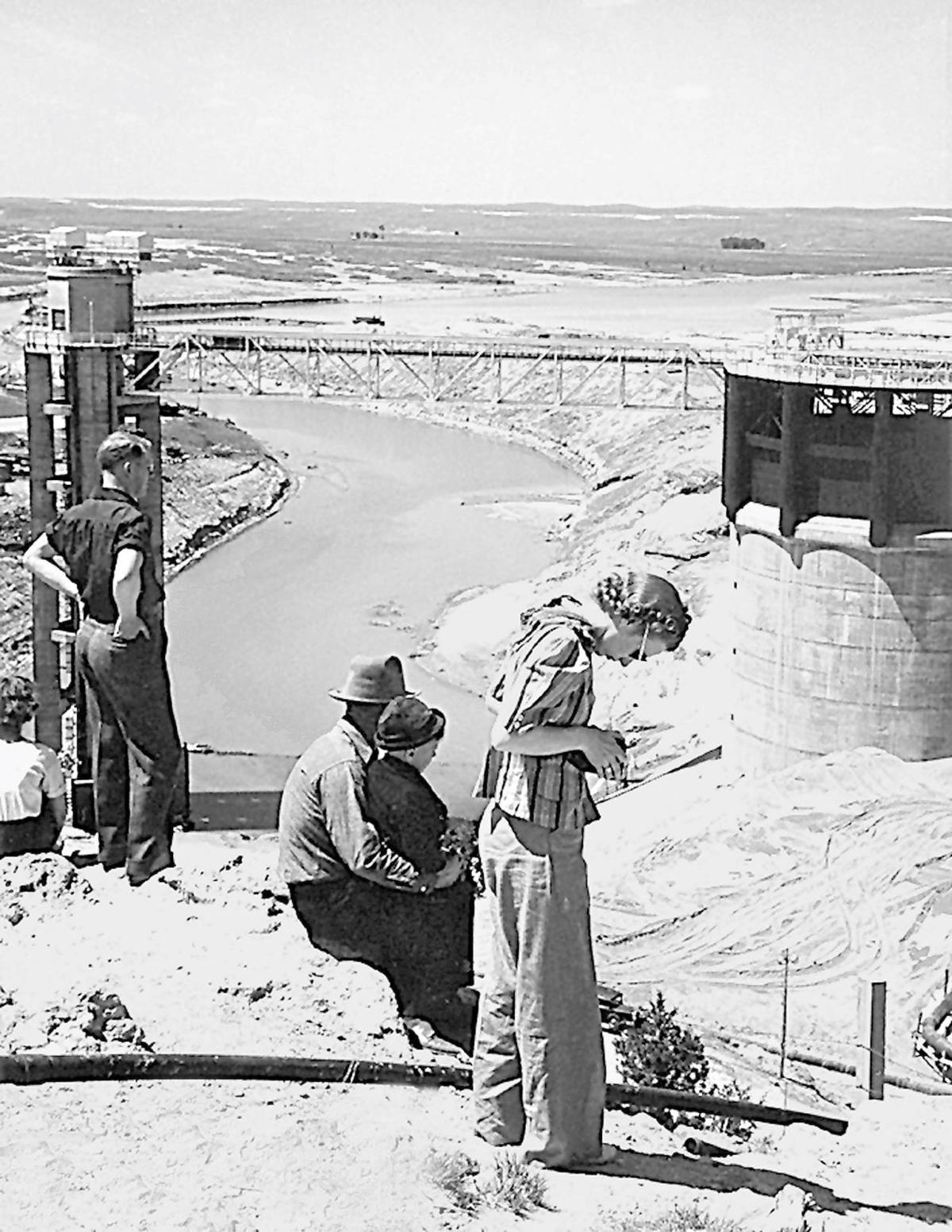 On July 22, 1941, about 2,000 people turned out in scorching heat for the Kingsley Dam dedication ceremony. Inspiration for the project came in 1910, and after gaining legal rights and financing, work began in 1936. It was the world’s second-largest earthen dam at the time. 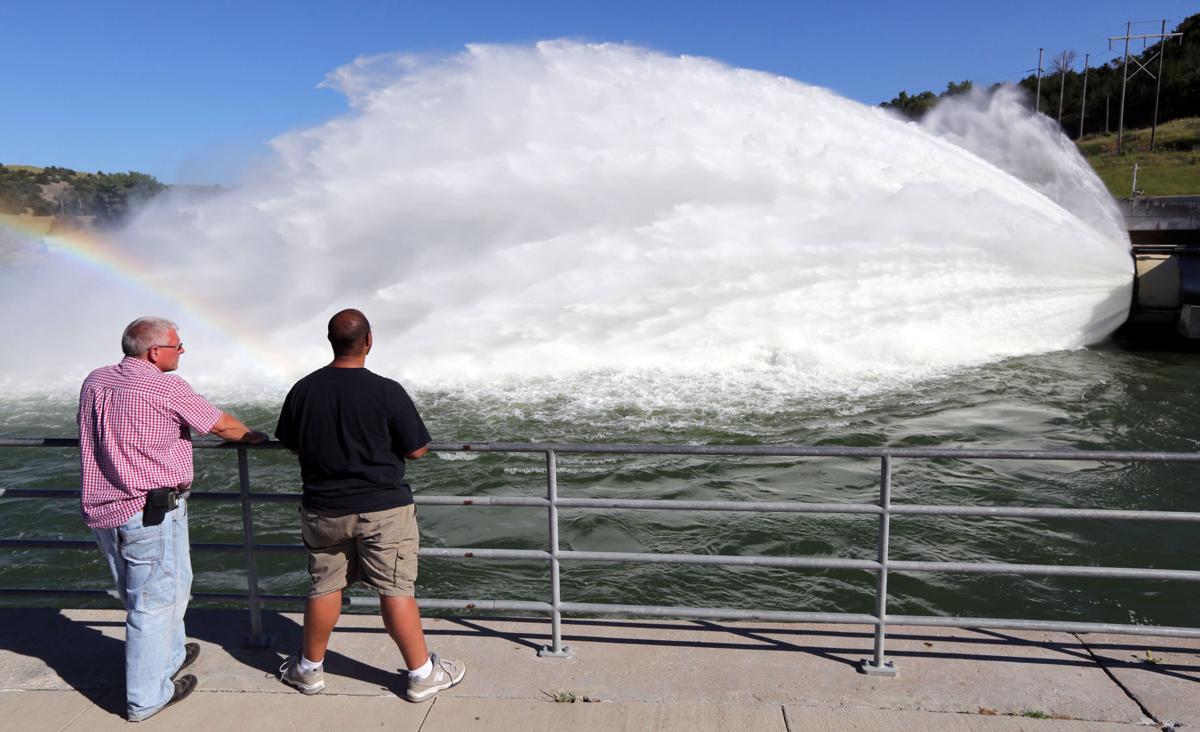 Jim McMurphy, left, of Omaha and his grandson, Michael Wiseman of Colorado Springs, Colorado, watch Lake McConaughy water spray out of Kingsley Dam and into the stilling basin at Lake Ogallala. The spray adds oxygen to the water to benefit trout and other fish in Lake Ogallala. The men were part of a vacationing family group that floated the Niobrara River near Valentine, Nebraska, and then traveled to Ogallala. 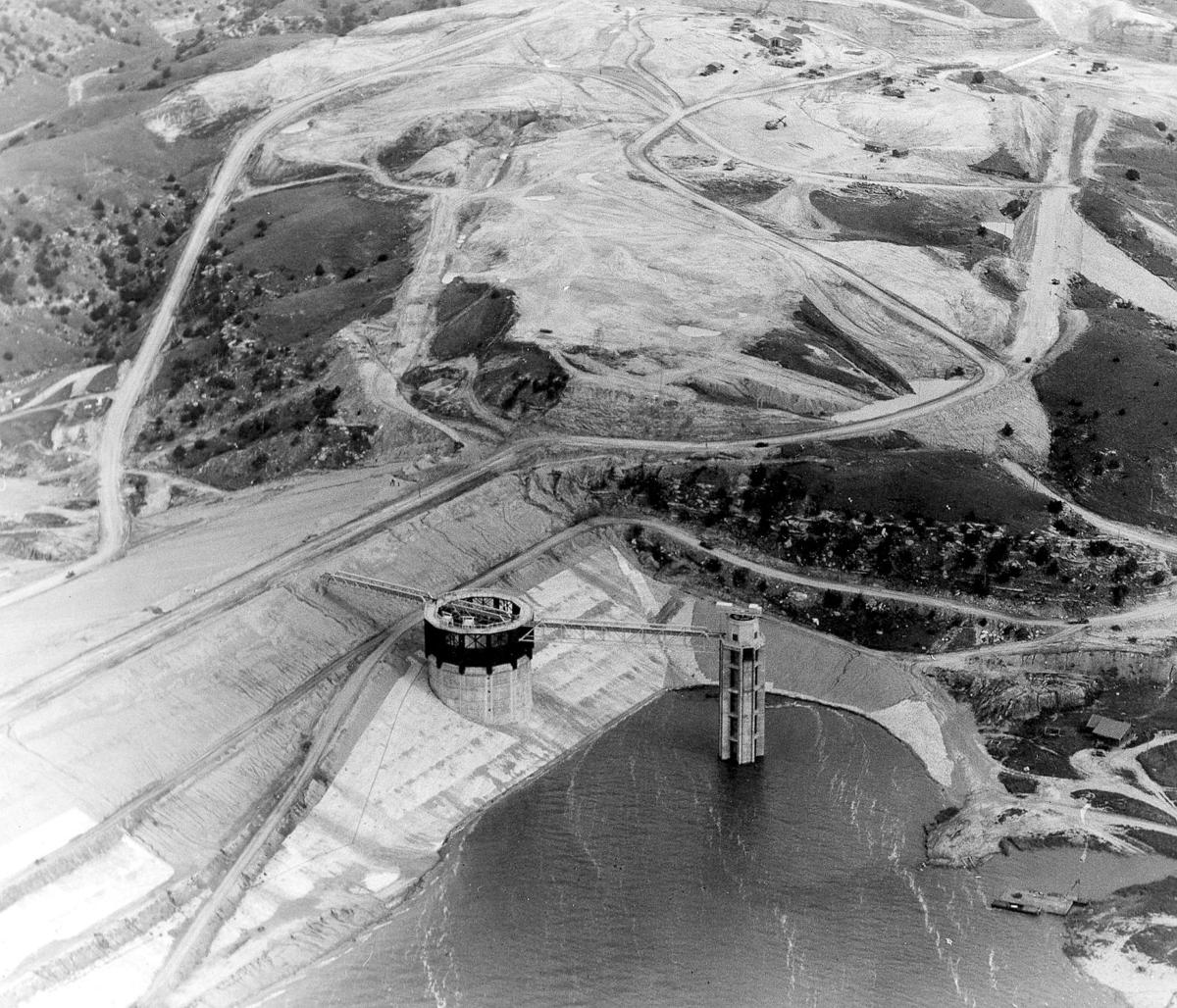 Aerial view of Lake McConaughy filling behind Kingsley Dam in 1941. 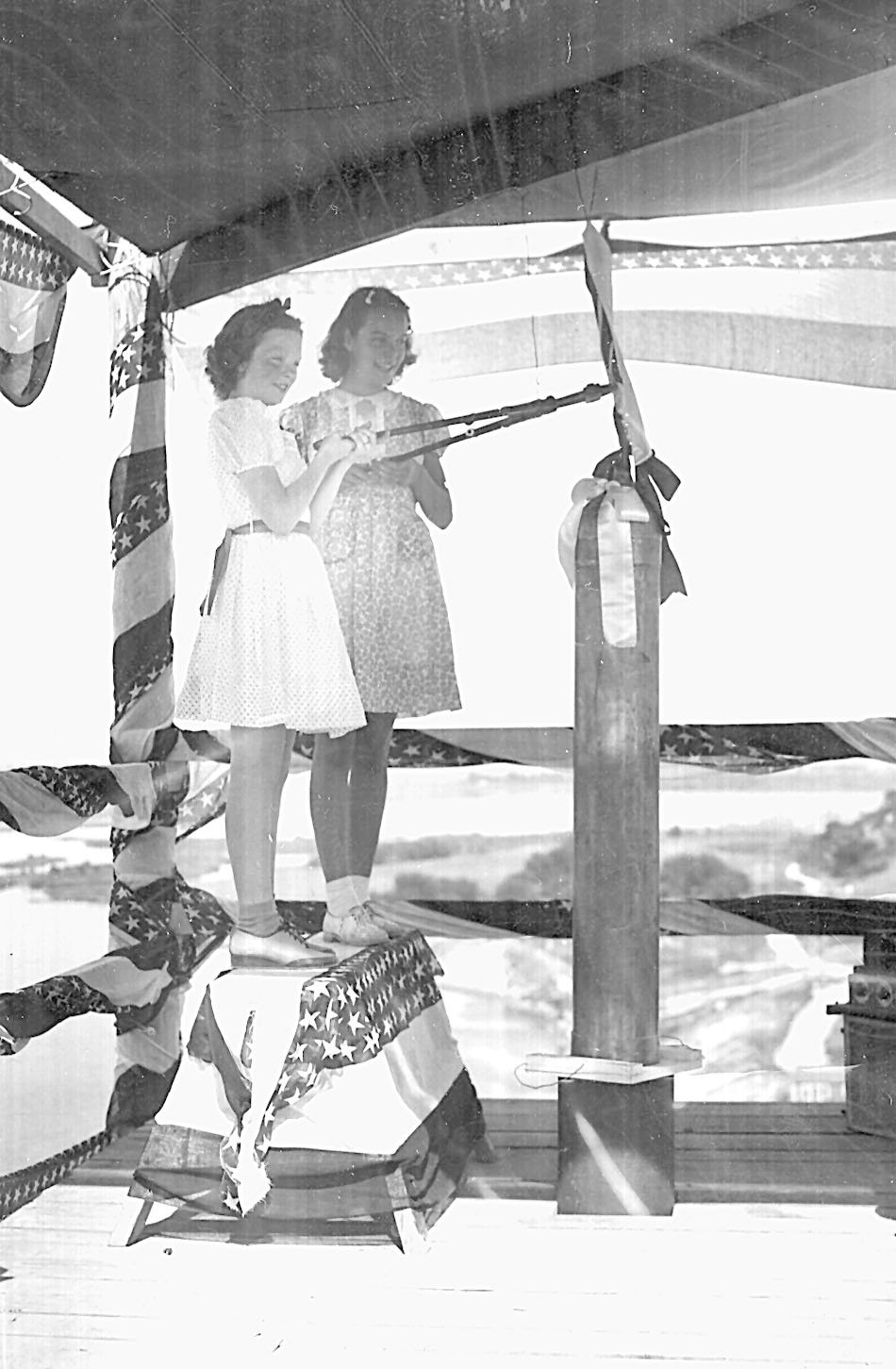 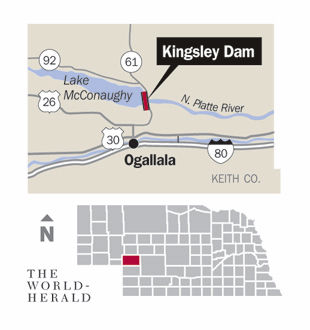 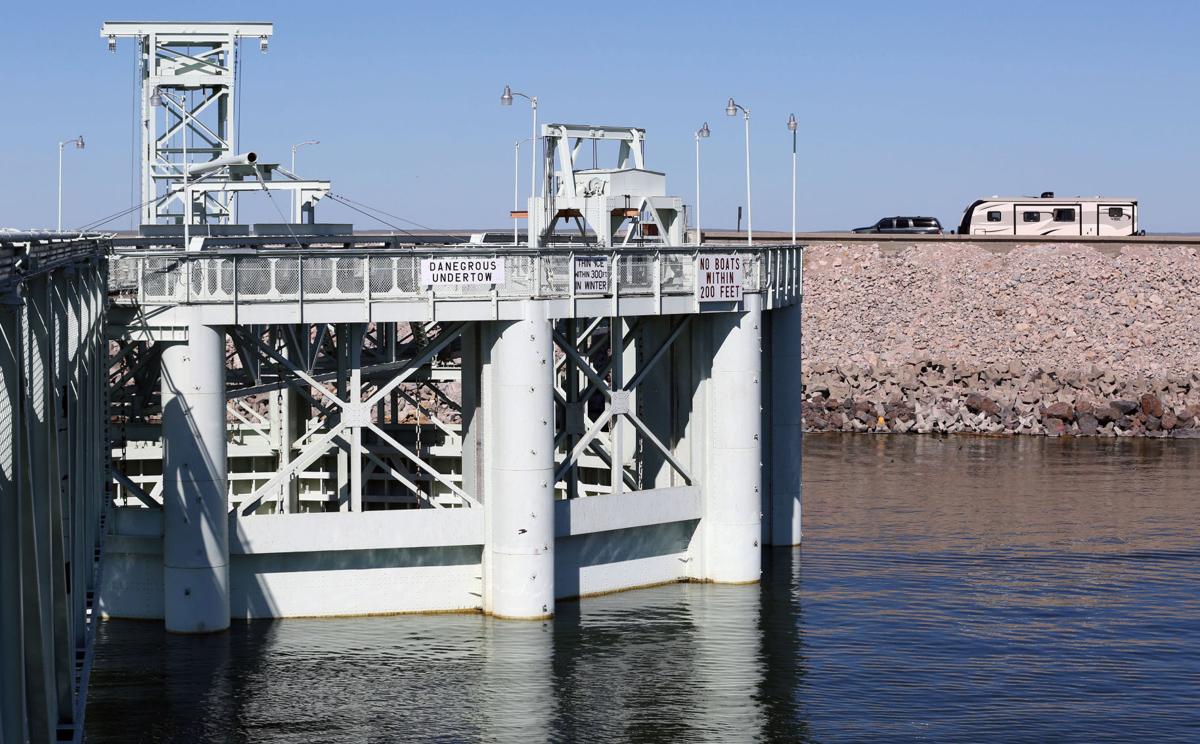 The Morning Glory spillway at Kingsley Dam and Lake McConaughy is as tall as a grain elevator.

OGALLALA, Neb. — The big boy that holds back Big Mac is an active 75 years old.

Kingsley Dam, the world’s second-largest earthen dam when it was completed in 1941 on the North Platte River in western Nebraska, will be the backdrop to two days of festivities at Lake McConaughy and Lake Ogallala this week.

Lake McConaughy is the big reservoir — the state’s largest, with 76 miles of shoreline along its 22-mile length — sprawling behind the dam. Lake Ogallala is the little reservoir below the dam.

The early 20th century dreamers behind the behemoth dam would be amazed, surprised and pleased not only at how the project turned out, but how hard the water works, said Don Kraus, general manager of Central Public Power and Irrigation District in Holdrege. Central owns and operates the dam and reservoir.

“It’s a little different than what the founders of the project were thinking about,” Kraus said.

Among the founders were Charles McConaughy, a Holdrege businessman and civic leader, and George P. Kingsley, a Minden banker.

McConaughy’s inspiration to irrigate out of the Platte River with canals came in about 1910. Kingsley heard about it two years later and became the project’s biggest promoter and financial supporter. They spent most of the rest of their lives gaining the legal rights and financing to create the dam and reservoir that would carry their names.

Work on the dam started north of Ogallala in 1936. The scale of the project was staggering for the time, according to historian Robert Richter’s account in “Lake McConaughy: A Geographic Portrait.”

The dam would be almost a quarter mile wide at its base. It would rise 162 feet above the river to a top width of 28 feet and contain 26 million cubic yards of fill. It would stretch 3.1 miles across the valley floor.

To make room for the reservoir, 33 miles of Union Pacific track was relocated, along with stations, sidings and stockyards. Twenty miles of oil pipelines, 39 miles of state and federal highways, 22 miles of county roads, and telegraph and telephone lines were moved.

And the entire town of Lemoyne was moved to higher ground on the north shore because it was sacrificed for the lake.

Construction of the dam ran at peak capacity through 1938 with more than 1,000 men working in the field and more than 30 engineers, draftsmen and office workers on site.

There were accidents and injuries, but no deaths during construction.

One of the seriously injured was Neale Petersen, who moved to Ogallala from Bloomington, Nebraska, to work on the dam in 1939.

Petersen was a mechanic on the project, repairing anything that needed work, said his son, Duane Petersen of Oshkosh, Nebraska.

A hydraulic key used to raise and lower the gates on the outlet tower (the smaller of the two towers at the dam) malfunctioned. The steel key, about 3 or 4 inches long, blew out of place and lodged in Petersen’s left eye.

The family lived in a little house in a workers complex near the spillway known as Kingsleyville. Lorie Oneal of Ogallala said her grandmother drove her injured grandfather to the Ogallala hospital.

“It was the first time she had ever driven a car,” Oneal said.

The doctor sent Petersen on a train to Omaha for special treatment that night. Petersen lost the eye.

“But dad got along pretty well the rest of the years,” Petersen said.

Maggie Headrick of Highlands Ranch, Colorado, said her father, Howard Brown, is credited with rescuing another worker when both were high on the outside of one of the two towers at the dam.

“Jobs were hard to come by during the Depression,” she said. “Dad farmed and was a mechanic in Grant, but he wasn’t making a living.”

Brown applied at the dam, but the foreman wasn’t hiring. Brown sat on the bank and watched the men work. The next day he showed up with a shovel and started working. The foreman reminded Brown that he hadn’t been hired.

One day Brown and another worker were on platforms suspended by ropes on a tower far above the riverbed. A windstorm hit and one of the ropes on the other worker’s platform broke, threatening to launch the man to the ground.

“Dad somehow swung his basket over and saved the man,” Headrick said.

Brown didn’t tell his family of the incident because his wife didn’t know he was working high above the ground to earn extra wages, Headrick said. A newspaper story of the rescue the next week spoiled the secret. Headrick’s mother insisted her husband stop working at the dam.

By May 1941, final work at the top of the dam was underway and the reservoir was filling with spring floodwater.

A crowd of 2,000 people turned out in 100-degree heat July 22, 1941, for the Kingsley Dam dedication ceremony. Neither Kingsley nor McConaughy lived to witness the completion of their dream.

Most Nebraskans and the thousands of Coloradans and others who make summer pilgrimages to the lake to boat and fish — or camp on the white-sand beaches — know McConaughy as a playground.

Lake McConaughy State Recreation Area records about 1 million visitations a year, generating more than $44 million in retail sales. The annual economic impact is more than $73 million and supports more than 950 jobs in Ogallala and Keith County, according to the Nebraska Game and Parks Commission.

“The tremendous recreational aspect is much greater than ever envisioned,” Kraus said.

But Kingsley Dam primarily was built to store water for south-central Nebraska farmers to irrigate their crops. Most of it is delivered via 575 miles of canals and pipelines to 110,000 acres of cropland mostly on the south side of the Platte River between North Platte and Minden.

The reservoir is more than just a source of water for Nebraska’s largest irrigation district.

The water stored behind Kingsley Dam cools the state’s largest power plant at Sutherland. It’s part of a system that is a source of water for four of Nebraska’s five largest cities: Omaha, Lincoln, Grand Island and Kearney.

It provides flows for habitat critical to endangered species. It recharges the south-central Nebraska aquifer from water oozing out of the canals. And, since 1984, a hydroplant on the dam generates electricity.

The estimated annual economic benefits of the dam and lake for irrigation, hydropower generation and recreation range from $556 million to $806 million, according to a study by the federal Bureau of Reclamation.

“We have a responsibility to manage that resource for multiple purposes,” Kraus said. “That’s the reality of today.”

10 a.m. to 4 p.m. — Kayaking and paddleboarding events at Lake Ogallala

8 to 9:30 p.m. — Boat parade at Lake McConaughy. Boats begin at Spillway Bay and proceed to Martin Bay along the dam. Viewing from turnout near south end of dam, or from the beach at Martin Day at north end.

The nation was changing quickly in 1910. Airplanes, radios and vacuum cleaners were new, and the Model T was a hot car. No one had an inkling …

For first time in 40 years, a plan for developing and managing Lake McConaughy

The plan envisions new boat ramps and campgrounds, fishing and road improvements, a dog park, an equestrian campground, trails, protective zones for threatened and endangered species and other initiatives.

On July 22, 1941, about 2,000 people turned out in scorching heat for the Kingsley Dam dedication ceremony. Inspiration for the project came in 1910, and after gaining legal rights and financing, work began in 1936. It was the world’s second-largest earthen dam at the time.

Jim McMurphy, left, of Omaha and his grandson, Michael Wiseman of Colorado Springs, Colorado, watch Lake McConaughy water spray out of Kingsley Dam and into the stilling basin at Lake Ogallala. The spray adds oxygen to the water to benefit trout and other fish in Lake Ogallala. The men were part of a vacationing family group that floated the Niobrara River near Valentine, Nebraska, and then traveled to Ogallala.

Aerial view of Lake McConaughy filling behind Kingsley Dam in 1941.

The Morning Glory spillway at Kingsley Dam and Lake McConaughy is as tall as a grain elevator.