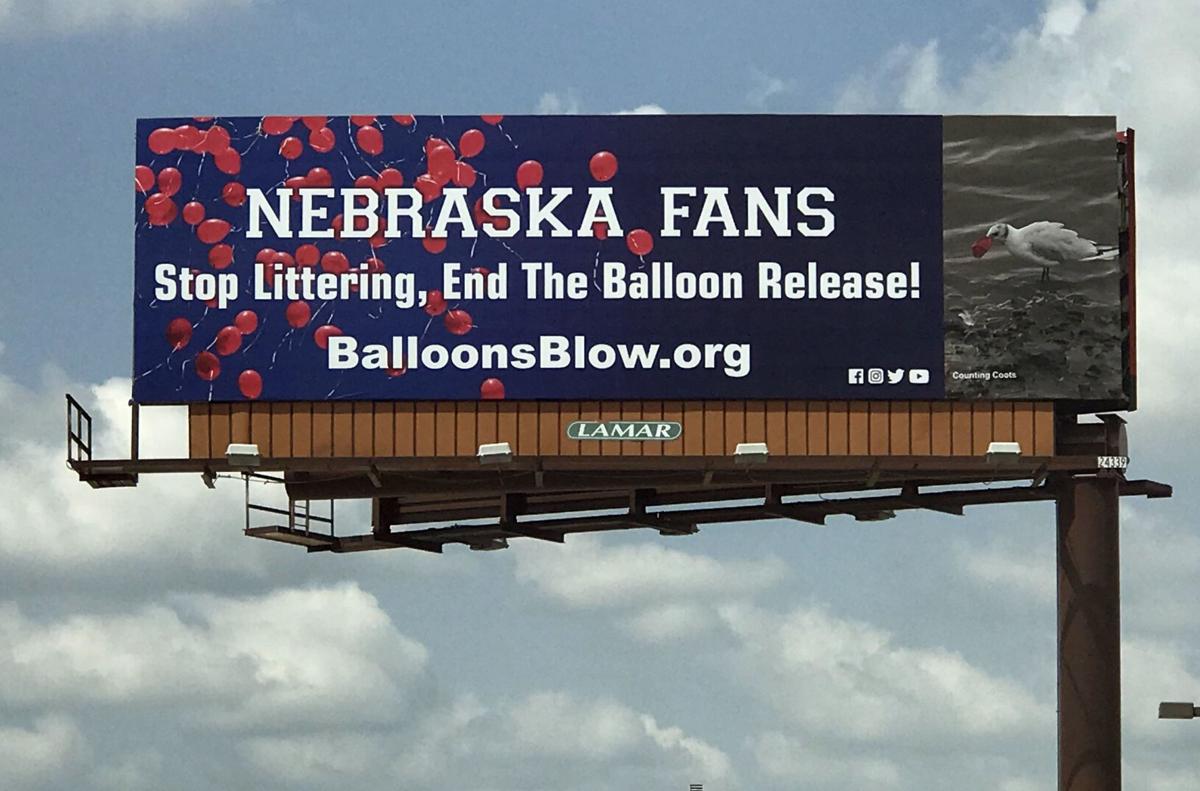 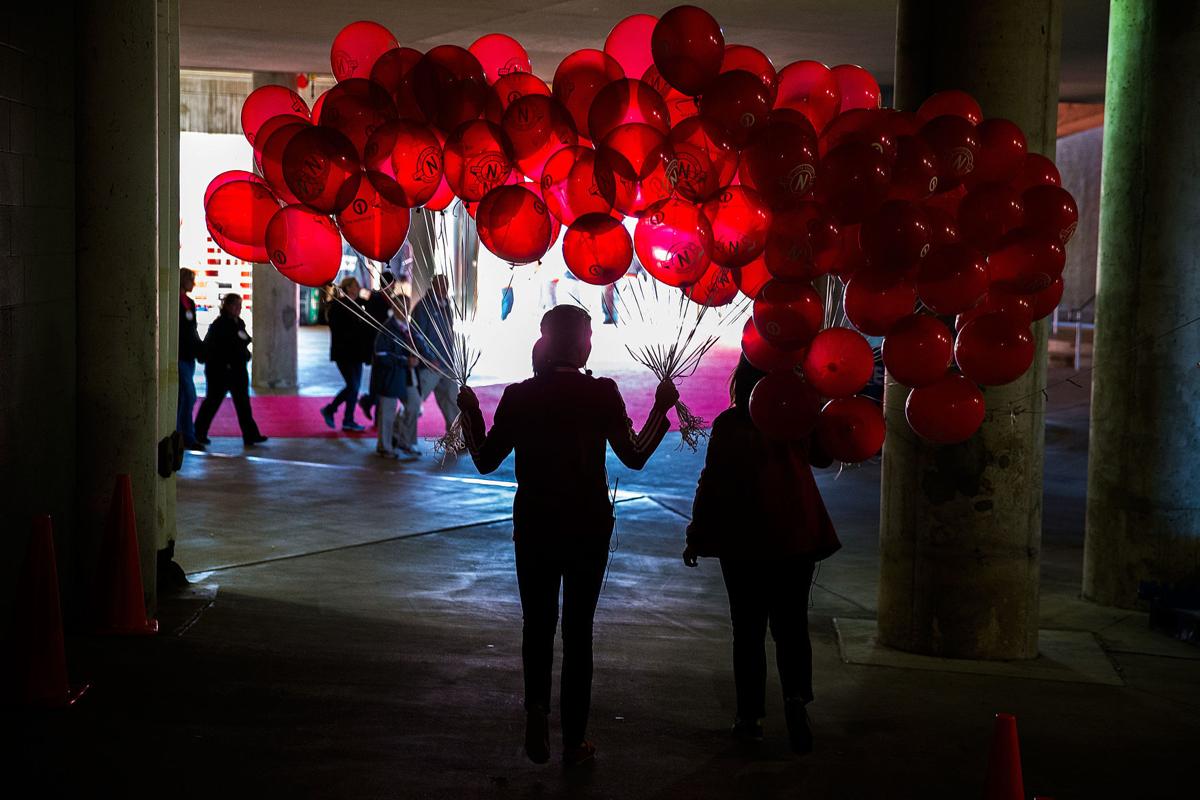 In this 2014 photo, volunteers carry balloons through the concourse at Memorial Stadium during pre-game festivities. Fans release the balloon once the Huskers score their first touchdown.

Releasing red balloons at Husker games is a 50-year tradition, but a Florida-based group says it’s time for it to end.

The small grassroots group, called “Balloons Blow,” has put up a billboard in Lincoln urging fans to: “Stop Littering, End The Balloon Release!” The billboard is at about 3800 S. Ninth St., near the intersection of South Ninth Street and Pioneers Boulevard.

Danielle Vosburgh, co-founder of the nonprofit group, said the release of balloons is harmful because wildlife can ingest the pieces that fall back to earth.

“Releasing balloons is simply littering,” she said. “What goes up must come down.”

The billboard was put up Monday and will remain up for about three more weeks, she said.

The University of Nebraska-Lincoln released a statement in response: “We haven’t discontinued our balloon tradition, but we recognize the concerns raised about our environment and our birds, fish and animal friends,” the statement said. “We too are concerned with their safety. For that reason, every balloon released in Memorial Stadium is 100 percent natural latex biodegradable. ... In addition, we do not use plastic tabs to tie off the balloons and we use 100 percent cotton strings.”

Fans release the balloons to celebrate the first Husker scoring drive. During last season fewer than 3,000 balloons were released per game, the university said.

It’s not the first time the balloon tradition has raised environmental concerns.

In 2016 an Omaha man filed a federal lawsuit against the University of Nebraska to stop the balloon launches during football games. The suit was later dismissed.

So what do fans think?

Dave Schatz of Omaha said he’s offended that an out-of-state group would try telling Nebraskans what to do.

“I think it’s a great tradition,” he said.

Tony Buccheri of Omaha said he loves the tradition and would like to see it continue. But he said he wouldn’t be opposed to the university finding another way to celebrate scoring drives that wouldn’t raise possible environmental concerns.

“The environment needs to be protected and respected,” he said.

This year, college football powerhouse Clemson University is ending its tradition of releasing 10,000 balloons into the air before games, a move that’s part of its sustainability efforts.

Releasing balloons has long bothered environmentalists, who say the pieces that fall back to earth can be deadly to seabirds and turtles that eat them. So as companies vow to banish plastic straws, there are signs that balloons will be among the products to get more scrutiny.

Emma Tonge of the National Oceanic and Atmospheric Administration said people might not realize balloons are a problem, she says, because of their “light and whimsical” image.

Balloons are not among the top 10 kinds of debris found in coastal cleanups, but Tonge says they’re common and especially hazardous to marine animals, which can also get tangled in balloon strings.

Already, a few states restrict balloon releases to some extent, according to the Balloon Council, which represents the industry and advocates for the responsible handling of its products to “uphold the integrity of the professional balloon community.” That means never releasing them into the air, and ensuring the strings have a weight tied to them so the balloons don’t accidentally float away.

Where does Donald Trump stand now?

The World-Herald's Scott Frost biography will be released Aug. 13 and is available now for pre-orders. Go to Omaha.com/ScottFrost to secure a …

Nebraska's quarterback battle is down to two. Will a starter emerge before the season?

Nebraska's second scrimmage of training camp didn't compel Scott Frost to name a starting quarterback. But the Husker head coach, for the first time, mentioned the possibility that both redshirt freshman Tristan Gebbia and true freshman Adrian Martinez could see the field early this season.

As Latinos blend into Nebraska culture, football can get lost in translation

Growing Latino populations have reshaped Nebraska, infusing industrial towns like Columbus with energy and culture. But those new families rarely take interest in Nebraska’s flagship sport, at least not immediately.

New School is now in session. Here are the rules: No dog-cussing the players. No bullying or personal shots about their appearance. If you must chew, do so with a positive message. Teach. Look forward.

After 12-hour wait, Husker fans' signature moment with Scott Frost is well worth it

Josh Eberhardt had his Husker jersey custom-made. He's No. 16 — his high school number — with his last name sewn in the back. He had a game-worn Orange Bowl patch affixed to it, and, later, snowflakes. To represent new Nebraska coach Scott Frost.

Editorial: A floating ocean boom is part of the answer as society works to reduce plastic consumption

It's encouraging to see this technical innovation to help address the plastic-trash problem in our oceans.

The Henry Doorly Zoo wants to make it easy for folks to do their part.

Husker balloon found on New York beach; did it start its journey in Memorial Stadium?

New York marine biologist Alyssa Lefebvre often picks up trash from beaches when she tests ocean water across Long Island. On Tuesday, she found what she called "the holy grail" — a red balloon with an "N" on one side and "Huskers" on the other.

In this 2014 photo, volunteers carry balloons through the concourse at Memorial Stadium during pre-game festivities. Fans release the balloon once the Huskers score their first touchdown.