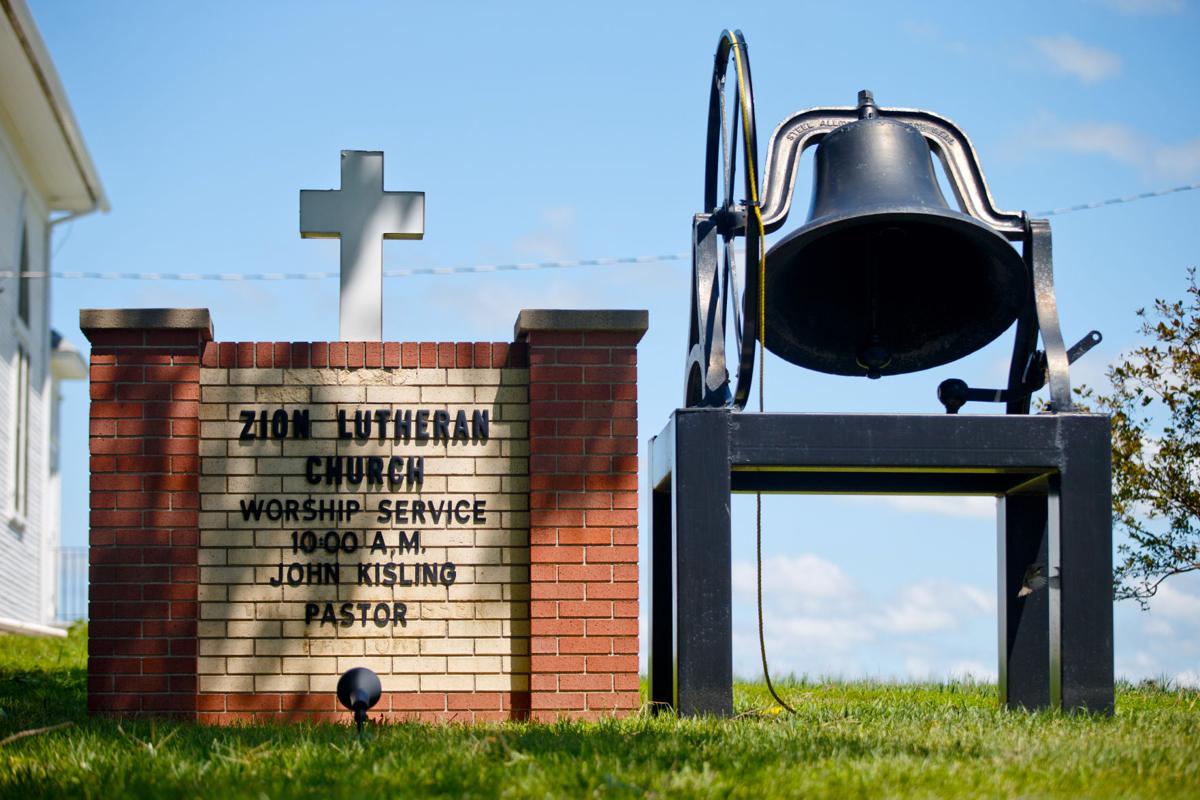 Zion Lutheran, near Auburn, is one of five rural Lutheran churches in a corner of Nemaha County. Many of Nebraska’s rural churches are struggling to keep going. 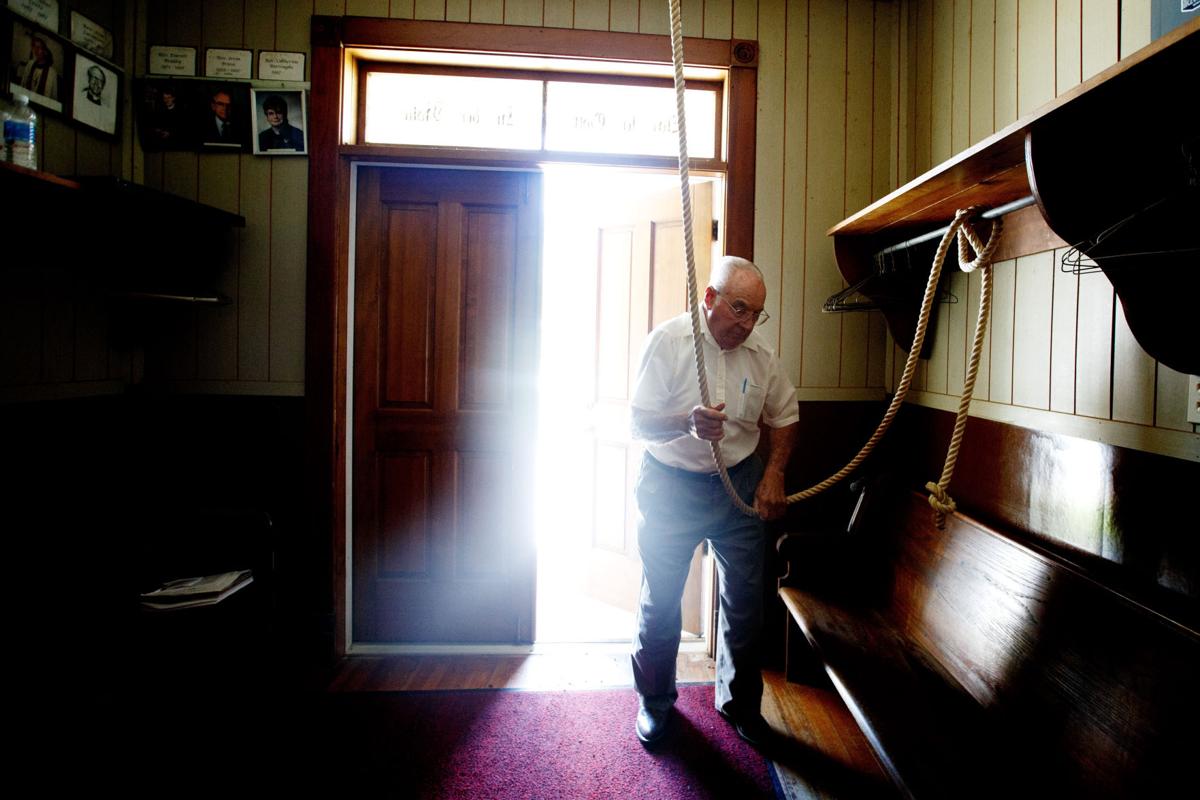 Marvin Caspers, a lifelong member of the congregation, rings the bell at St. John Lutheran Church, aka the old Stone Church, near Auburn, Nebraska. 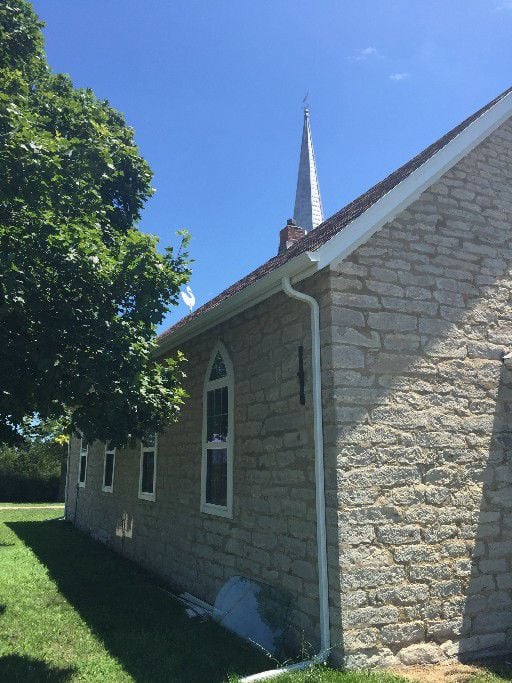 The old Stone Church will celebrate its 150th year of worship on this site in a service Aug. 7. A swan-shaped weather vane still sits atop the roof. 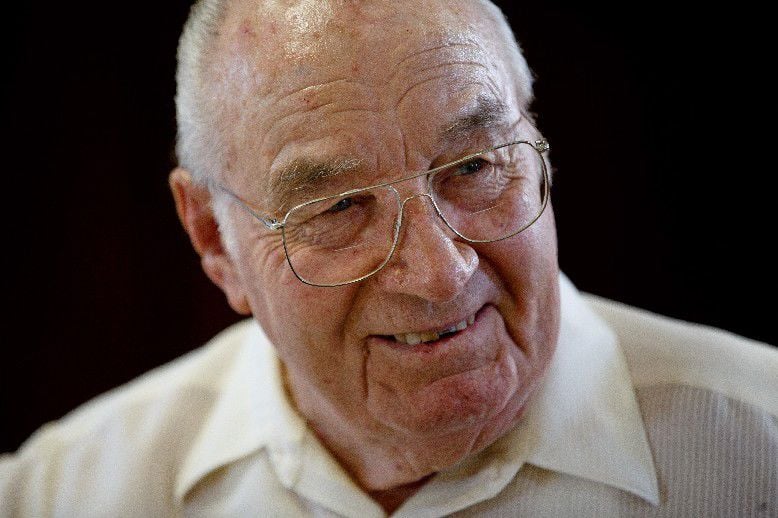 At one time, Marvin Caspers recalled, he could stand on his farm as see the steeples of four Lutheran churches. 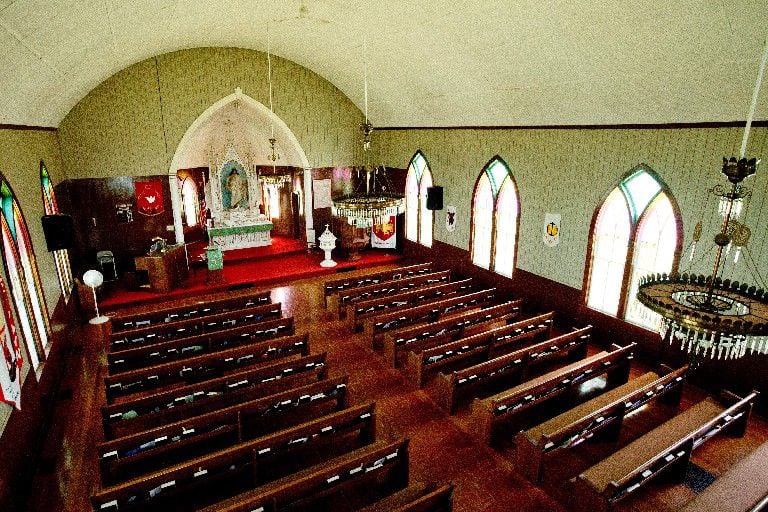 St. John’s congregation usually worships in a newer, wooden church, built in 1903, where attendance at Sunday services averages 35 to 40 people. Unlike the Stone Church, though, the wooden structure isn’t air conditioned. 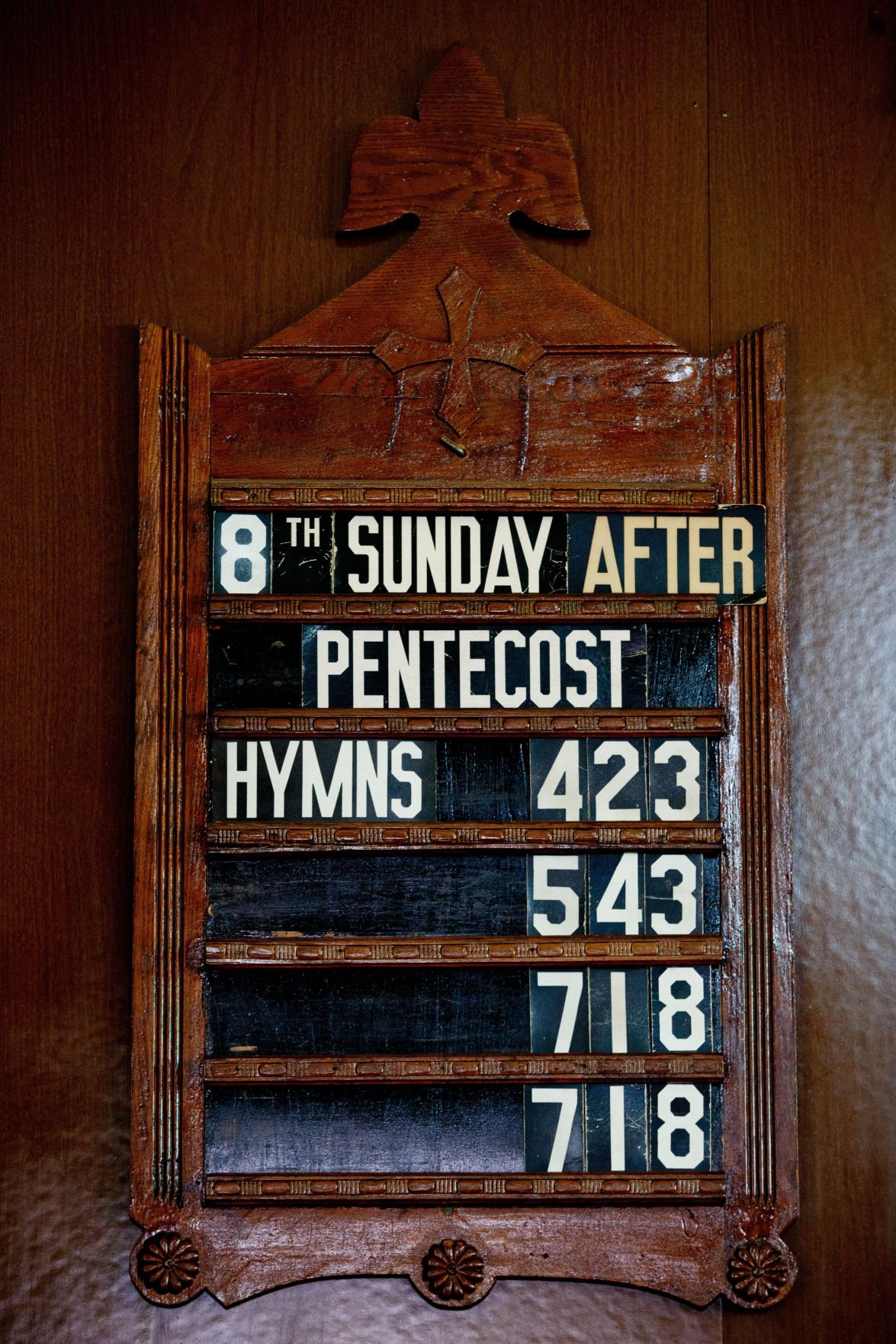 The songboard in the chapel at St. John church.

AUBURN, Neb. — A century and a half ago, German immigrants in search of escaped oxen came upon a good stand of timber along Muddy Creek, amid the rolling prairie west of here.

Statehood for Nebraska was still seven months away. But the settlers were impressed with the wooded valley.

So they established a Lutheran church on a hill, overlooking the winding creek.

On Aug. 7, members of what is known as the “old Stone Church” will gather to celebrate the 150th year of worship on the site. The church, whose formal name is St. John Lutheran, isn’t the oldest in the state — that honor likely goes to the Presbyterian Church in Bellevue, at 2002 Franklin St., which was opened 10 years earlier.

But the old Stone Church is among the oldest in Nebraska and is among five rural Lutheran churches that are clustered in a corner of Nemaha County, about an hour south of Omaha.

As Iowa’s Madison County has its bridges, this part of Nebraska has its country churches.

A few other rural Lutheran churches have closed in the county, including one, known as the Stutheit Church, that was only a couple of miles south of the Stone Church.

That’s a lot of Lutheran churches, but in the settlement days around 1867, when Nebraska became a state, there were a lot of Lutheran farm families in the area, according to Marvin Caspers, a lifelong member of St. John Lutheran.

At one time, Caspers said, he could stand on his farm as see the steeples of four Lutheran churches.

But like many churches in rural Nebraska, the Stone Church now struggles with membership. Attendance at its Sunday service averages 35 to 40 people, less than half the attendance of 25 years ago.

“The population has thinned out,” said the 84-year-old semi-retired auctioneer and farmer. “Just in the 3 miles around here, I could count 20 farms that have disappeared.”

The Stone Church was built in 1867 with limestone hauled by wagon from a nearby quarry.

It replaced a wooden schoolhouse that was the original church. That schoolhouse burned down in 1902, and led to the construction of a larger, wooden church in 1903 with a 63-foot-tall steeple.

Above the front door reads a welcome, in German: Ehre fer Gott in der Hohe (“Honor for God in the High”).

The architect of the Stone Church, Christian Schwan, said it was built “to last a century.” A weather vane shaped like a swan still sits atop the roof to commemorate the architect’s work on a church said to be the “mother” of 10 other churches.

In 1873 the congregation received a boost from then-German ruler Kaiser Wilhelm I of Prussia. He donated the iron from two captured French cannons for a bell.

The bell, forged at a New York foundry, weighed 1,521 pounds and was said to be the state’s largest when it was dedicated in 1874, with 1,000 people and Gov. R.W. Furnas in attendance.

By tradition, the bell, rung by a hearty pull on a thick rope, is sounded during funerals from the time the body leaves the church to when it arrives at the grave in the cemetery, just a few yards to the west. In the old days, the bell ringing was free of charge to those who had contributed to the purchase of the bell, but cost $1 for those who hadn’t.

“I guess it was pay now or pay later,” Caspers said.

In the 1930s, as anti-German sentiments rose before World War II, a controversy arose over the use of the German language in services at the Stone Church. A pastor quit before a compromise was struck to alternate between services in English and German.

The Stone Church now serves mostly as a social and meeting hall. That is except on the hottest Sundays, when Sunday services are moved there because it is air-conditioned, unlike the newer, larger, wooden church. Both structures are now on the National Register of Historic Places.

Caspers said that a fund has been established to take donations to pay for the upkeep of the historic structures.

The Rev. Megan Morrow, the assistant to the bishop of the Evangelical Lutheran Church of America, will preach at the 10:30 a.m. worship service at the 150th anniversary on Aug. 7. A catered dinner will follow.

Caspers asked that anyone planning to attend RSVP by calling 402-274-5896 or emailing stonechurch150@hotmail.com.

An admission: I can never hear enough stories about outhouses.

There’s the one about the brick outhouse a bachelor farmer showed me down by Western, Nebraska, years ago. The pack of white dogs that roamed the place added a surreal touch.

Peter Bleed, an anthropologist at the University of Nebraska-Lincoln, always insisted that the outhouse pits at historic homes should be “investigated.” Lots of history tossed in those one- and two-holers, he said, that should be dug up.

The patrons at the Monowi Tavern — the only business in the northeast Nebraska town of one resident — still use an outhouse. Grandfather rights, you know.

And there’s plenty of small-town Halloween stories about outhouses being left in the middle of main street by mischievous teens, or tipping over a prairie potty with someone inside.

But during a visit to Nemaha County last week, I heard a new, conspiratorial tale:

When the community of Johnson completed its sanitary sewer system (to allow indoor, flush toilets) years ago, it asked all residents to get rid of their outhouses. A handful resisted the government request.

The solution, according to my source: A group of teens was hired to confiscate the holdout outhouses under cover of darkness on Halloween and deliver them to the town dump.

Pentagon on lockdown after shooting near Metro stop

Pentagon on lockdown after shooting near Metro stop

The Good Life: Conference on 1-room schools, 'the foundation of the building of this state,' attracts plenty of interest

Betty Stukenholtz, a 78-year-old former University of Nebraska-Lincoln office worker, will use the stories she’s received about country schools for a new book. Stories about walking to school on muddy roads, finding nests of mice in the school piano, holding “box socials” and playing games of red rover.

After taking scores of schoolchildren on field trips into Nebraska’s prehistoric past with the Dancing Leaf Earth Lodge and Cultural Learning Center, Les and Jan Hosick are hanging it up.

The Good Life: Motorcycle wreck claimed his leg, but radio news anchor is ready to reclaim the mic

Dale Johnson lost his left leg and traded his motorcycle for a wheelchair after an accident on a Lincoln street in March. But you won’t hear a word of complaint from the veteran morning news guy at KFOR.

Kent Schwartz, 55, comes to this naturally. He grew up in Columbus, Nebraska, where both his father, Clayton, and brother, Cory, were sign painters for years. Kent’s painting talents have taken him to jobs at Omaha’s Durham Museum and to Hollywood, where he worked on the movies “Teen Wolf” and “Bachelor Party.”

The Good Life: A Nebraska Czech seeks to bring back a Wilber fixture – the Fox Hole Tavern

The Good Life: Filmmakers’ stop in one-resident town leads to experience that’s one of a kind

Have you heard the one about the two Austrian filmmakers who walked into a small-town bar in Nebraska?

Zion Lutheran, near Auburn, is one of five rural Lutheran churches in a corner of Nemaha County. Many of Nebraska’s rural churches are struggling to keep going.

Marvin Caspers, a lifelong member of the congregation, rings the bell at St. John Lutheran Church, aka the old Stone Church, near Auburn, Nebraska.

The old Stone Church will celebrate its 150th year of worship on this site in a service Aug. 7. A swan-shaped weather vane still sits atop the roof.

At one time, Marvin Caspers recalled, he could stand on his farm as see the steeples of four Lutheran churches.

St. John’s congregation usually worships in a newer, wooden church, built in 1903, where attendance at Sunday services averages 35 to 40 people. Unlike the Stone Church, though, the wooden structure isn’t air conditioned.

The songboard in the chapel at St. John church. 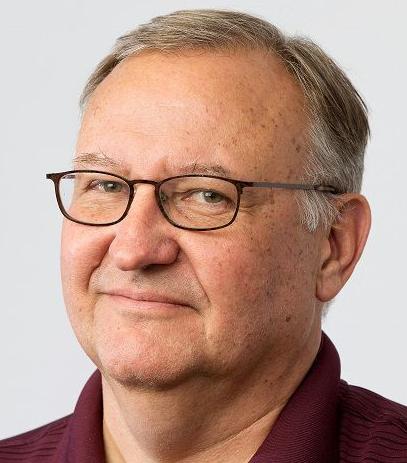