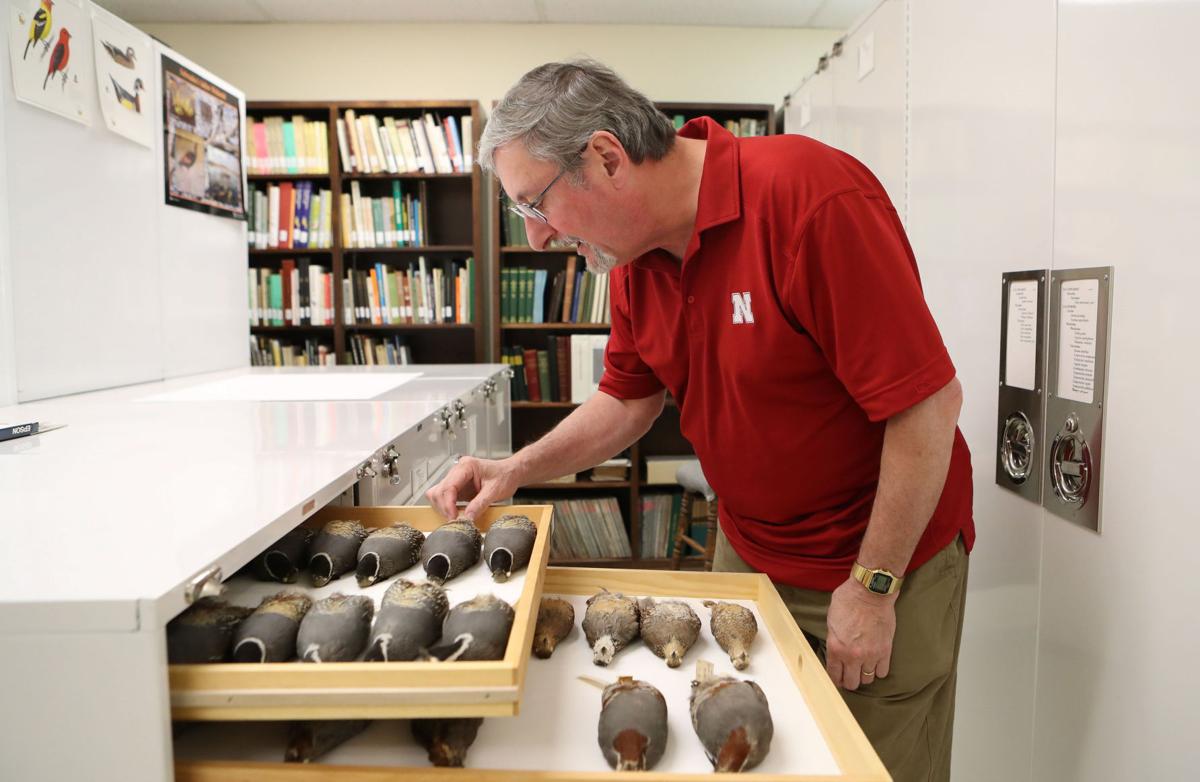 Robert Zink, a professor at UNL and curator at the Nebraska State Museum, believes that many birds have been incorrectly considered subspecies of the same species, when actually they’re different enough that they should be considered different species. 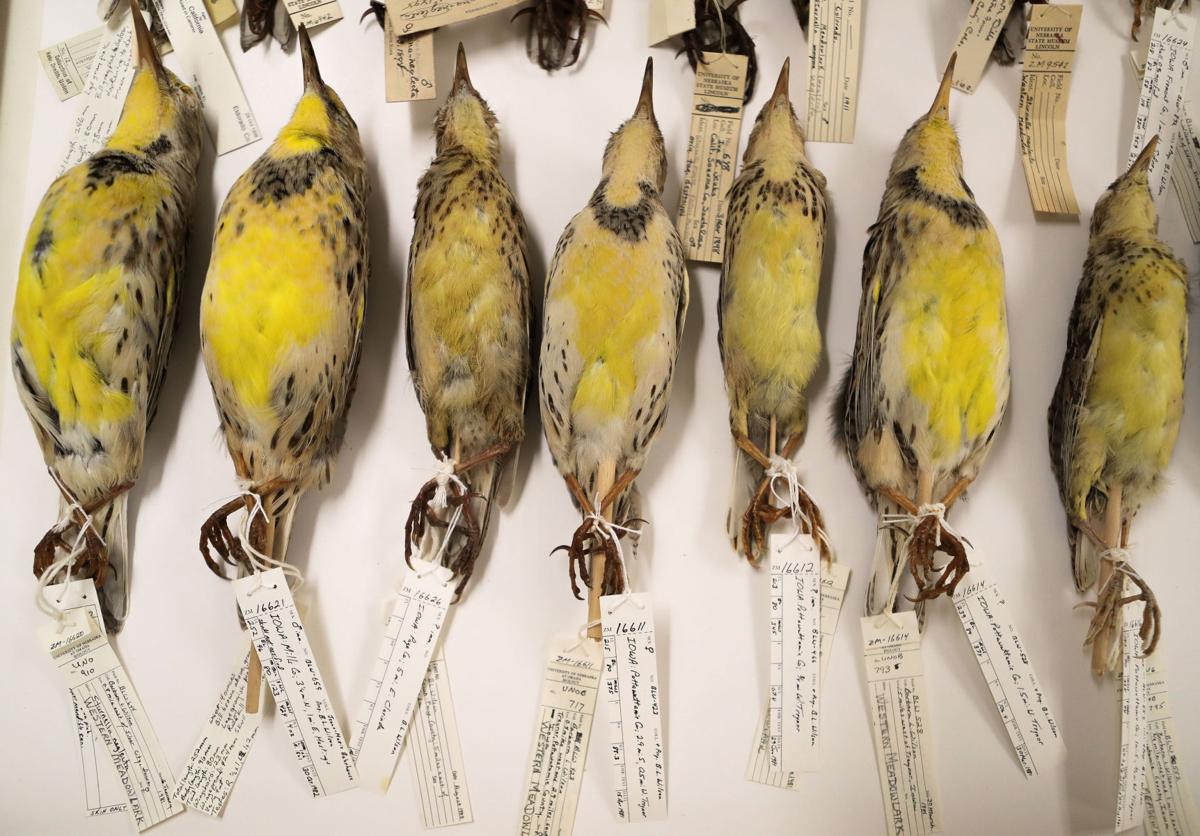 The Western meadowlark, which is the state bird of Nebraska, is represented in the collection at UNL’s Nebraska Hall. 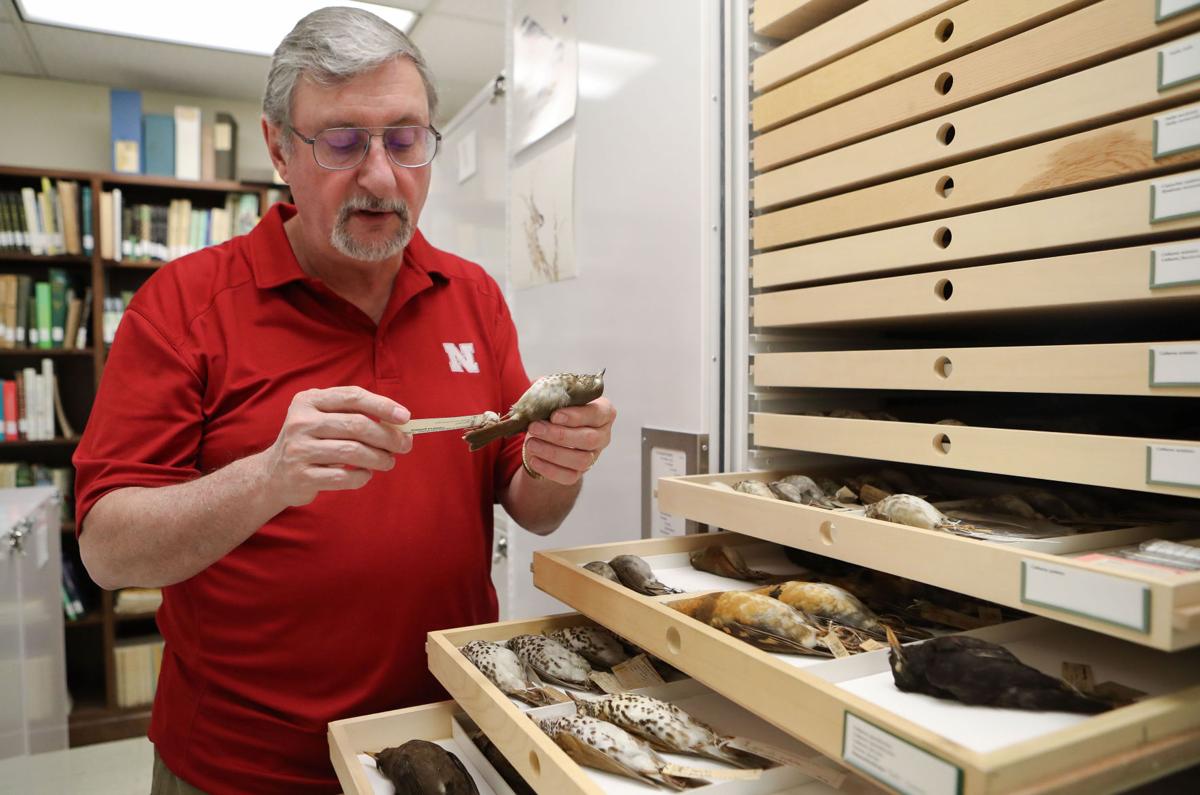 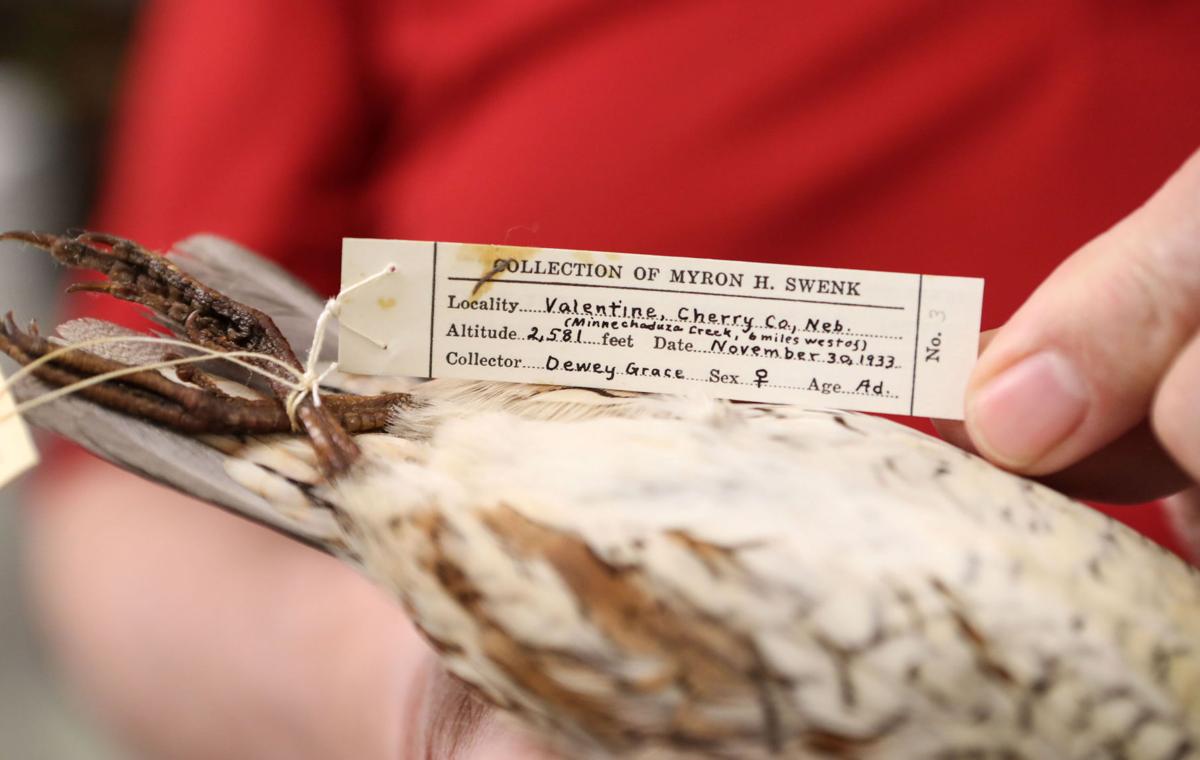 Robert Zink, a professor at UNL, shows a tag on a bird from 1933 at at Nebraska Hall. 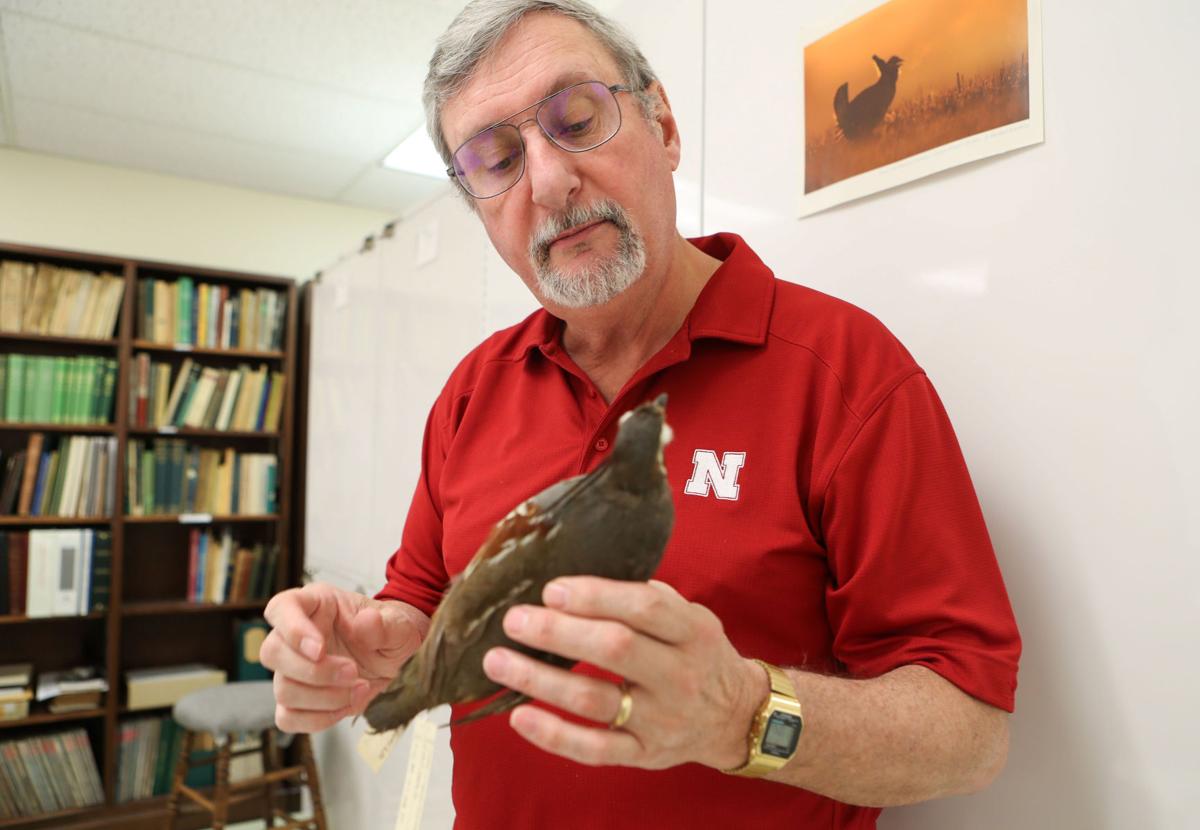 Robert Zink, a professor at UNL, examines a California quail in a collection of about 12,000 birds at Nebraska Hall. 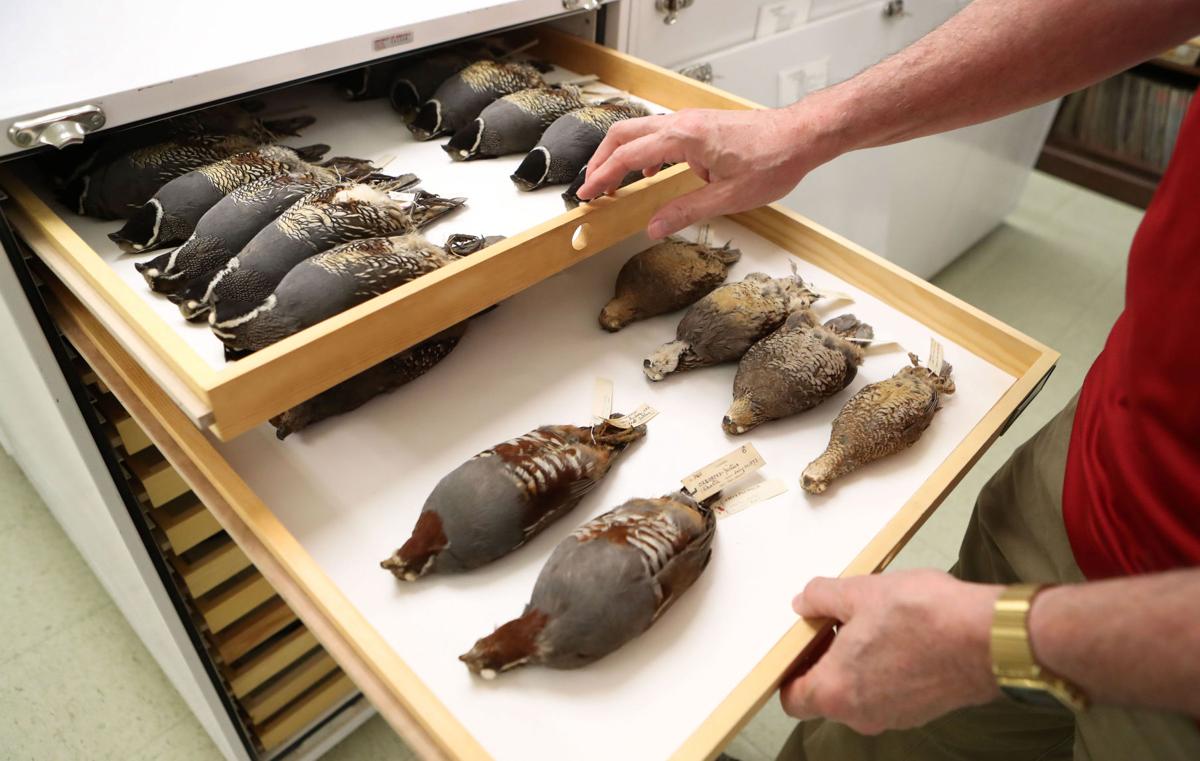 Zink looks through a categorized collection of various quails. 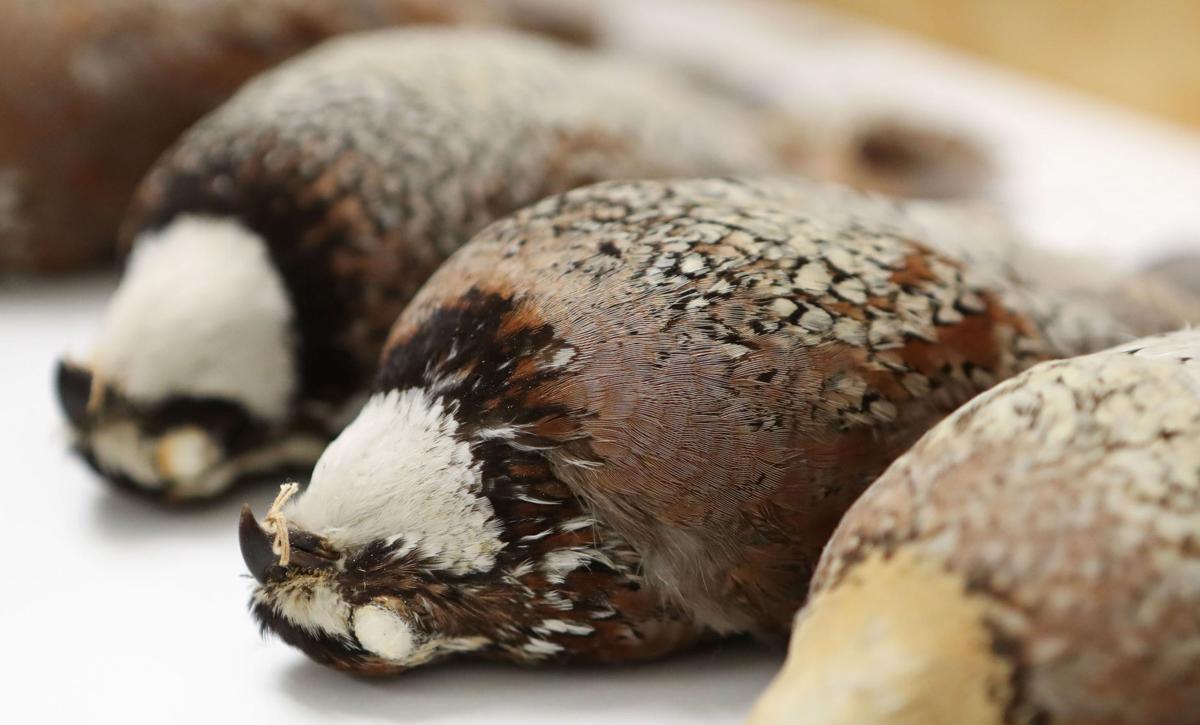 Bobwhite birds are lined up in a drawer at Nebraska Hall where they are used for research.

A disagreement over what constitutes a bird species has ruffled the American ornithology community, and a University of Nebraska-Lincoln professor is in the middle of the scrum.

At issue is the notion espoused by UNL’s Robert Zink and others that there are almost twice as many bird species across the globe as widely believed because so many birds have been wrongly classified as belonging to the same species.

Zink, a professor in UNL’s School of Natural Resources, says this isn’t just a minor flap among bird nerds. Instead, “species” is a vital designation that leads to the protection of birds and other animals, as the federal law called the Endangered Species Act indicates. If a bird species is actually two species, then one of the species might not get the protection it merits. Zink said, for instance, that the spotted owl is three species, and the fox sparrow is four.

Although subspecies also may be protected, Zink said, species get the most attention.

Zink, curator of zoology collections at UNL’s Nebraska State Museum, said “the currency of conservation is the species. ... The question is, are you calling them species or subspecies?”

Some bird experts object to Zink’s notion that the globe actually contains about 18,000 species instead of the widely accepted 10,000.

Kevin Winker, a University of Alaska-Fairbanks professor who has written about the issue, said in an email that Zink and his allies at the American Museum of Natural History in New York “have been beating the drum for a change in the definition of species” for 20 to 30 years.

“In all that time, they have not swayed mainstream ornithology,” Winker said.

“That’s his perception,” Zink said. “There’s been a lot of people who have changed their minds about species.”

Zink’s belief results in part from work that he and others did more than 20 years ago at the American Museum, which houses hundreds of thousands of archived bird specimens. Zink and the American Museum’s George Barrowclough and Joel Cracraft examined a random sample of 200 bird species and many of their subspecies and found that subspecies frequently had considerably different form and structure — bigger or smaller beaks, wing variations and other differences.

They combined their findings with those of John Klicka, a University of Washington professor who over the past few years has examined many genetic studies of bird species and come to the same conclusion as Zink, Barrowclough and Cracraft. The four published a paper in November in the journal PLoS One. (PLoS stands for Public Library of Science.)

In the paper, titled “How Many Kinds of Birds Are There and Why Does It Matter?” the four argue that the study of bird anatomy and the genetic studies reveal the same fact — species are errantly being called subspecies and there are about twice as many species as is conventionally believed.

The dispute has simmered for years, and some say it’s largely semantic.

“There’s nothing semantic about it,” Zink said.

Some bird experts prefer the biological species concept, defined largely by whether kinds of birds can interbreed. If they can, they are of the same species. Further, if they live in different regions but experts believe they would breed if they had the chance, those are one species as well.

John McCormack, curator of the Moore Laboratory of Zoology at Occidental College in California, said he generally believes that bird species have been undercounted.

Zink’s concept — the phylogenetic species concept — looks for distinguishable differences among groups, either genetic or in appearance, internal or external, in determining whether birds are of different species.

“The prevailing species concept right now is the BSC (biological species concept). ... The PSC folks are the insurgents,” McCormack said in an email.

Zink said it might take time to win the argument. “It took people a long time to agree the Earth wasn’t flat.”

Zink said guesswork goes into whether birds in different regions would interbreed if given the chance. But genetic testing proves that some are distinct and haven’t interbred, and they should be considered separate species, he said.

If the number of species suddenly doubled, many birders would be able to expand their bird lists, or lists of species they have seen. Clem Klaphake, a past president of the Audubon Society of Omaha and the Nebraska Ornithologists’ Union, said some birders might like that. They could add to their bird lists without having to go outside because they would have already seen some of the subspecies given newfound species status, said Klaphake, a retired Bellevue University sociology professor.

Bird field guides would have to be redone. Drastically increasing the number of species “would have major impact, I think,” he said.

Zink said the concept of subspecies is less prevalent with other animals, such as reptiles, but there probably would be more mammal and reptile species if experts used his concept to classify them, too.

Cracraft said some argue that it would take a lot of effort to reclassify thousands of kinds of birds. But identifying them properly, he said, is important.

“And we still have a long way to go.”

Four positives for CWD found in recent testing of deer

The presence of chronic wasting disease (CWD) in deer has been detected for the first time in southeastern Nebraska, according to findings by the Nebraska Game and Parks Commission.

Whether you’re new to hunting or an experienced die-hard, you can learn something new at three upcoming venison and game bird cooking classes taught by Cure Cooking at Fort Atkinson State Historical Park (SHP).

Cat advocates would like to see many free-roaming cats placed into "working cat" programs, in which felines are adopted to wipe out mice for farmers and businessmen. Bird scientists say there's one place for cats: Indoors.

Robert Zink, a professor at UNL and curator at the Nebraska State Museum, believes that many birds have been incorrectly considered subspecies of the same species, when actually they’re different enough that they should be considered different species.

The Western meadowlark, which is the state bird of Nebraska, is represented in the collection at UNL’s Nebraska Hall.

Robert Zink, a professor at UNL, shows a tag on a bird from 1933 at at Nebraska Hall.

Robert Zink, a professor at UNL, examines a California quail in a collection of about 12,000 birds at Nebraska Hall.

Zink looks through a categorized collection of various quails.

Bobwhite birds are lined up in a drawer at Nebraska Hall where they are used for research.