This has been one of Omaha’s hottest summers on record as much of the nation bakes under persistent heat. While the weekend should bring temporary relief to the metro area, the heat is expected to return stronger next week, according to the National Weather Service.

The effect has been wide-ranging but not always obvious since the heat has been chronic, not extreme. Electric bills are up, tomatoes are refusing to set fruit, and drought is beginning to emerge.

It’s the kind of summer we’ll need to get used to as the planet warms because of rising greenhouse gases, climate scientists say.

“The conditions thus far in June and July point to a sign of what is to come (in Nebraska), warmer summers, warmer days, high humidity,” said Martha Shulski, state climatologist for Nebraska.

Through Wednesday, Omaha was averaging its fifth hottest summer since record-keeping began in 1871, said Van DeWald and Paul Fajman, meteorologists with the weather service.

The reason? Nearly every day since June 1 has been above average. Just six days have seen temperatures below average, and generally just by a few degrees.

From June 1 through Thursday, Omaha’s high reached at least 90 degrees on 22 days. That’s more than the 19 recorded in June through August of 2019, DeWald said.

And while daytime highs are what people notice, it’s at night that Omaha’s temperature records have been set so far this summer. Warm nights are considered one of the chief markers of a warming planet.

Omaha set a June record for the average low temperature being the highest since record-keeping began in 1895, according to the National Centers for Environmental Information. In other words, nights averaged the record warmest for any June in 125 years. On two nights, Omaha set individual records: June 7 and 8, when the overnight low failed to drop below the upper 70s.

“We just have had a lot of consistently warm days, and we’re not cooling off much at night,” Fajman said.

Omaha’s been hot because the central U.S. has been well above normal from Kansas north into the Dakotas. Nebraska averaged its ninth hottest and 18th driest June on record, according to data released this week by the National Centers for Environmental Information.

Electric bills are rising as people, many homebound because of the pandemic, crank up their air conditioners. The Omaha Public Power District reports seeing an increase in residential electric use in June.

David Houk, a meteorologist with AccuWeather Inc., The World-Herald’s weather consultant, said the need for air conditioning is up 60% in the Omaha area over normal, based on “cooling degree days.” From June 1 through Wednesday, Omaha had accumulated 520 cooling degree days compared with the usual 322.

A cooling degree day is a proxy for energy use, based on how much the average daily outdoor temperature varies from what’s considered comfortable without air conditioning.

Nearly the entire state was shy on rainfall in June, and some areas received only 10% to 25% of normal rainfall, according to the National Integrated Drought Information System.

Almost a third of Nebraska is at risk of slipping into drought, and 14% already has, according to the National Drought Monitor. Likewise, drought is creeping into western Iowa.

The heat and lack of rain are worsening those conditions, Shulski said. “Depending on amount and timing of rainfall, conditions could continue to deteriorate relatively quickly this time of year,” she said.

Pastures are the immediate concern, and several bouts of rain will be needed for them to be semiproductive, Dutcher said. Heat stress can prove fatal to cattle, and the risk next week is being closely watched. Corn, too, is at risk of diminished yields because of heat stress.

In the backyard garden, vegetables such as tomatoes and peppers aren’t setting fruit because it’s been so hot, said Scott Evans, horticulturist with the University of Nebraska-Lincoln Extension. By this time of year, tomato plants should at least have green tomatoes on them, and so far many don’t, Evans said. The problem? Once temperatures rise above 90 degrees, the pollen can become sterile or the flowers can drop without setting fruit, he said. “That is all heat-related,” he said.

While it’s hard to tie the weather in a given season at one locale to global warming, the type of weather Nebraska has seen this summer is indicative of climate change: chronic heat, hot nights and extreme precipitation, Shulski said.

Rising night-time temperatures, which are increasing at a faster pace than daytime temperatures, are one of the insidious aspects of global warming, climate scientists say. That’s because it is at night that living things — plants, animals, humans — have a chance to recover from daytime heat. With less chance to recover, food production could be affected and mortality could increase from heat waves.

The U.S. Climate Prediction Center says the odds favor warmer than normal weather for the rest of July across much of the U.S., including Nebraska and Iowa. The agency said much of eastern Nebraska and most of Iowa are at high risk of excessive heat late next week.

Dutcher said the key to next week’s weather will be this week’s rains and next week’s winds. If it’s rainy, the landscape will have more moisture to fuel humidity. If that happens and winds don’t kick up next week, then models indicate that the weather could become dangerously hot and muggy.

“If we can maintain a decent breeze (greater than 8 mph), then it will be tolerable,” he said. Otherwise, he said, heat index values late next week could exceed 110 degrees.

‘The Night of the Twisters’ in Grand Island 40 years ago

Lacking aggressive action on climate change, the frequency of 90-degree days is expected to jump in the decades ahead.

32: Omaha's current average number of 90-degree days in a year

Omaha on Sunday set a record for its longest, earliest stretch of 90-degree days, according to National Weather Service meteorologist Scott Dergan. Sunday’s high of 96 became the city’s seventh consecutive day at or above 90 degrees.

'An impressive storm': Researchers find the 'mother ship' in Nebraska

In mid-May, field research involving more than 50 scientists and students from four universities got underway in the Great Plains — just in time to catch one of the most active two weeks of tornadic weather on record.

The bomb cyclone triggered a torrent of rain and snowmelt runoff, resulting in one of the nation's costliest inland floods on record and one of the worst Nebraska blizzards in decades. The storm caused an estimated $10.8 billion in damage.

2019 was region’s wettest on record. All that moisture impacted birds, cattle, even West Nile

The heavy precipitation played out in multiple ways, many that have been well-documented: lost lives, damaged infrastructure, and the loss of livestock and crops. But there were also less publicized effects.

The Army Corps of Engineers estimates that there’s $1.9 billion worth of property in the 500-year flood plain of the Papillion Creek watershed. The flood study proposes a dam on Thomas Creek in northern Douglas County, higher levees, new floodwalls and the widening of some creeks.

At Creighton, climatologist James Hansen warns that the Midlands' weather extremes will get worse

Taken by themselves, floods such as those that occurred in March in Nebraska and Iowa don’t prove much, James Hansen said, but a look at weather globally does. “There is an increased frequency of climate extremes, which is not natural,” he said.

UNL analysis: In 80 years, summers in Nebraska will feel like those on southern border today

Children born today in Omaha will experience summers more like those in Tulsa, Oklahoma, and points south as adults. In some areas of southern Nebraska, summers will be more like those in Fort Worth, Texas, or even the Texas-Mexico border.

'Swarms' of tornadoes are on the rise, but the exact cause is unclear

In recent decades, tornadoes are occurring on fewer days, but the number of days with big outbreaks is increasing.

Natural weather patterns triggered March flooding. How much of a role did climate change have?

The Missouri River has a history of destructive flooding, but increases in runoff are heightening flood worries.

An investigation started when a woman bought five Husker tickets then learned they had been purchased fraudulently.

Rain chances in the Omaha area intensify around 10 p.m., but if the metro area doesn't catch one of the thunderstorms moving across the region, it may not get much precipitation.

Enjoy Omaha's mild weather for the next two days because the weekend is likely to be hot and muggy.

Drought has officially come to the Omaha metro

Rain chances return Sunday night, but successive widespread rains will be needed to erase the drought.

It's a scorcher in Omaha metro; heat advisory in effect Saturday

Omaha is experiencing some of the hottest weather of the summer this weekend.

Legislative efforts to develop a climate action plan for Nebraska have stalled for years, but a group of state senators and scientists hope this is the year it gets a green light.

Rain has been a tale of too much or too little, and that's not changing

About 6" of rain was reported in Cass County, with similar amounts south of Glenwood and near Pacific Junction in Iowa.

The high temperature forecast for Monday is 81 to 84 degrees, according to the National Weather Service. Even better, the humidity won’t make it feel hotter.

Omaha area's hot, dry summer ends on a hot, dry note, but much-needed rain is on the way

Omaha’s hot, dry summer ended with an unusually dry August that tipped the metro area into extreme drought. But this week could bring the first real rain since the third week of June.

Smoke from wildfires might get thicker in Nebraska on Wednesday

An arriving cold front on Wednesday could help concentrate wildfire smoke at ground level on Wednesday, but that's not a certainty. 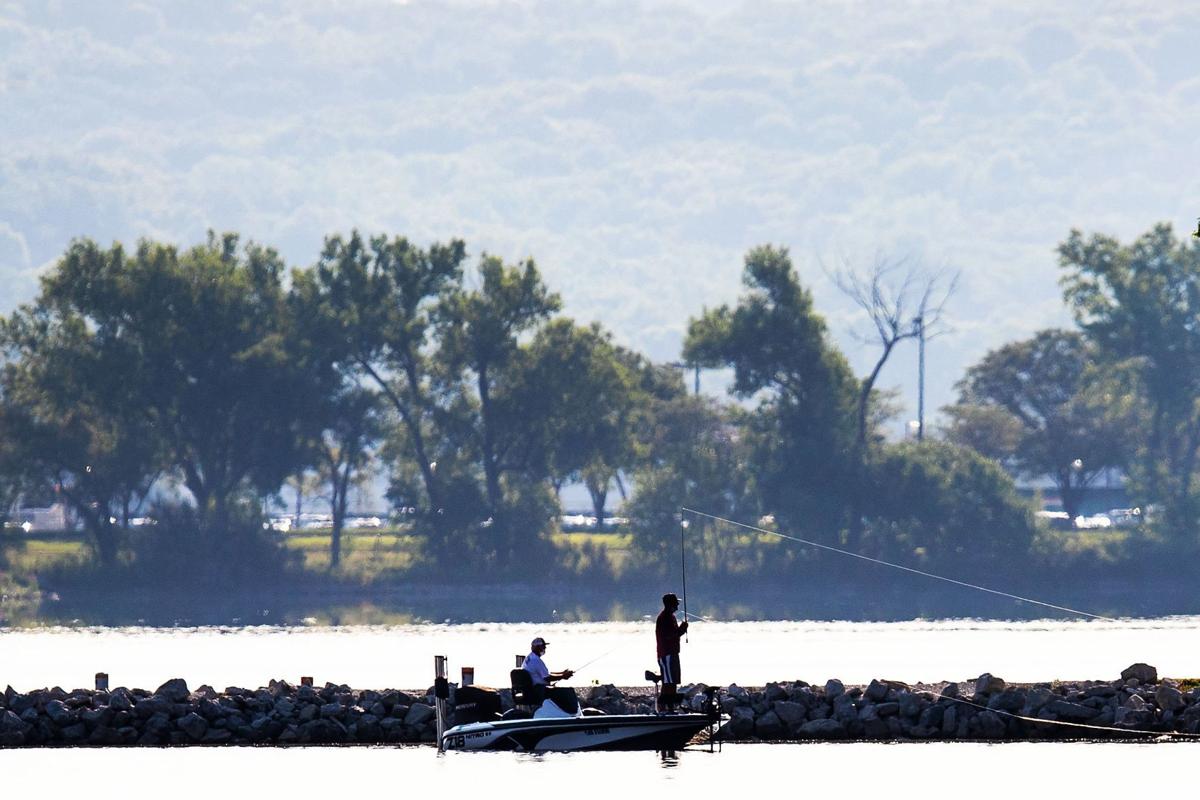 Fishing was comfortable Tuesday morning at Carter Lake, with temperatures in the 70s — on their way to the 90s for the 21st time since June 1. The 22nd came Wednesday. 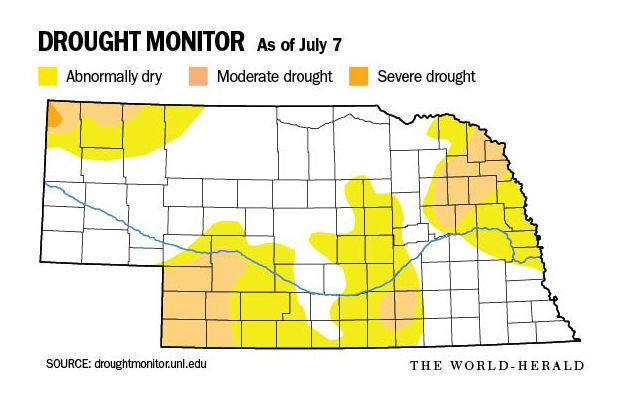 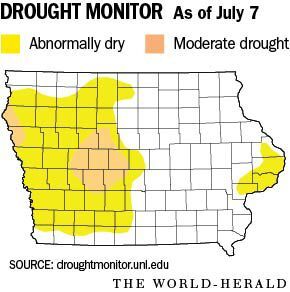