I-80 to be rebuilt through Omaha; $860 million plan outlines future of metro area freeways
9 comments
Share this
{{featured_button_text}}
1 of 2 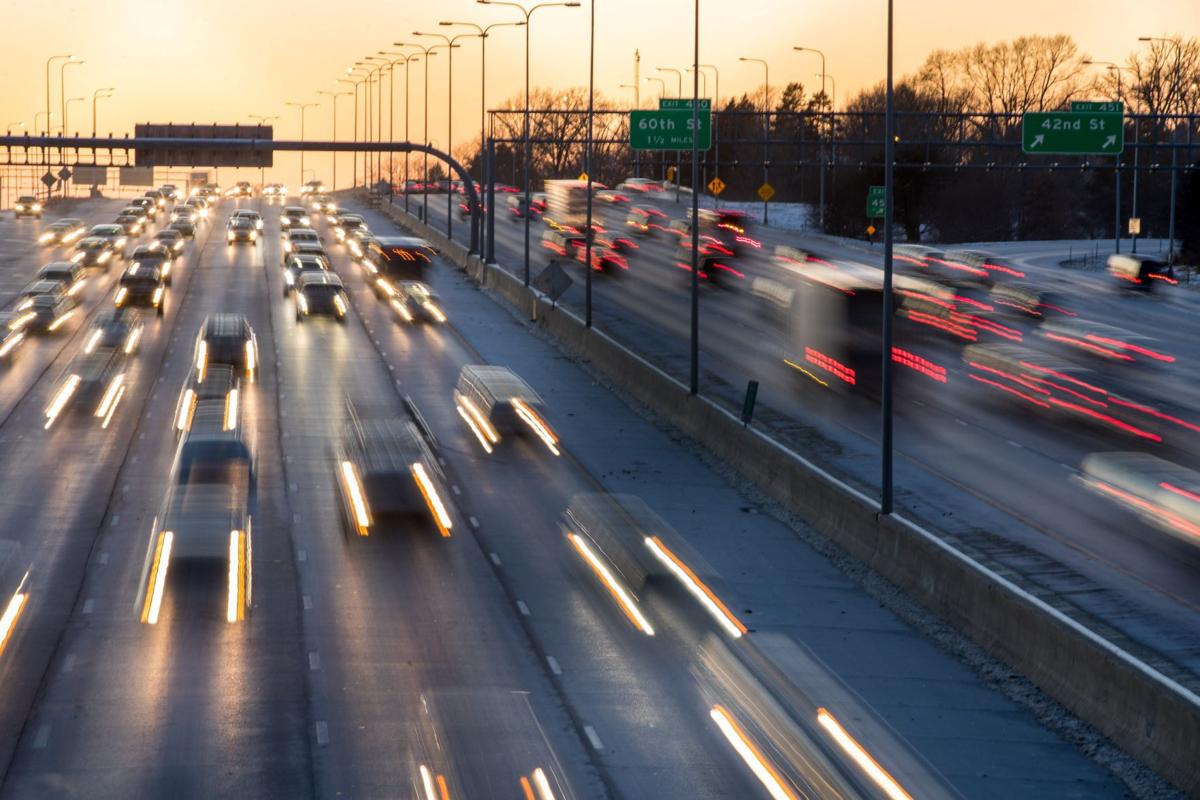 The interstate system in the Omaha metro area would be rebuilt under a new $860 million plan from the Nebraska Department of Transportation. 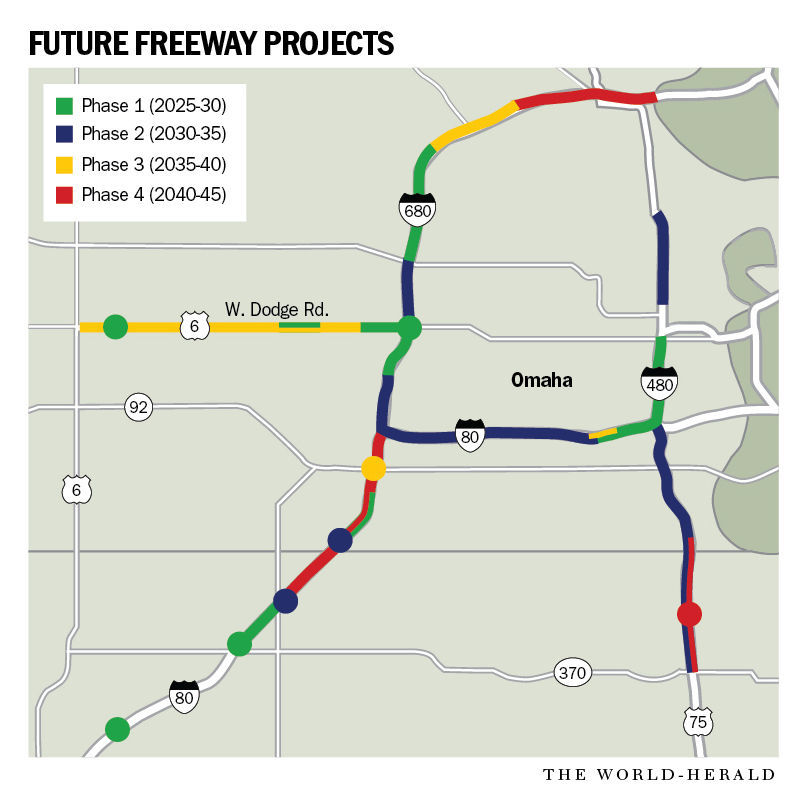 Interstate 80 through Omaha will be widened under a new state plan to plot the course for the metro area’s freeways.

The Nebraska Department of Transportation has completed a major study that outlines $860 million in changes over the next 25 years to Interstates 80, 480 and 680, the Kennedy Freeway, West Dodge Road and the West Dodge elevated expressway.

Most notably, it outlines plans to widen I-80 from four main lanes each way to six lanes through Omaha between I-480 and 680.

The plan targets trouble spots known to local drivers, calls for wholesale interchange redesigns to improve traffic flow and opens the door to signaled on-ramps and driving on the Interstate shoulder.

Major changes would start in five years. The full expansion could happen by 2045.

Key changes planned for freeways in the Omaha area

Here is a breakdown of key changes to Omaha-area Interstates as well as the Kennedy Freeway and West Dodge Road. This list also includes other changes, such as buses being allowed to drive on shoulders.

State highway officials told The World-Herald that the system needs improvements if the Omaha area wants to maintain the travel times it has long valued. Even with widening, highway officials acknowledge they can do only so much to alleviate congestion.

By implementing significant changes, time spent in delayed traffic is still projected to increase 50% by 2040, according to the Metropolitan Area Planning Agency, which cooperated on the study. Without the changes, delays are projected to rise 150%.

The state’s announcement is the second major roads plan for the Omaha area to emerge this year.

Tuesday, the Omaha City Council agreed to put Mayor Jean Stothert’s $200 million street maintenance bond issue to a public vote this May. Stothert envisions the measure as one in a series of bond issues shoring up Omaha’s streets over a 20-year period, potentially to the tune of $800 million before every city street is resurfaced.

Even without future city bond issues, the two efforts would put more than $1 billion into metro area road construction.

Unlike Stothert’s plan — which would require a property tax increase in the city of Omaha — state officials say they can fund the highway projects with existing revenue streams.

Owen said the department is prepared to initially put $25 million a year into the effort, targeting construction to begin in 2025. Officials said they need time to design projects and buy right of way.

I-680 and the West Dodge Road interchange:

I-80 westbound in southwest Omaha:

State highway officials stressed that the study does not lock in projects or any specific time frame. They said the plan is meant to be flexible in case the future turns out differently than expected — particularly if automated vehicles change driving as we know it.

At the same time, the study is modeled after the state’s 1985 report that outlined Omaha’s last Interstate widening, the expansion of West Dodge into an expressway and construction of the elevated expressway.

Without the changes outlined in the Metro Area Travel Improvement Study, the region can expect more gridlock and longer commute times, said Tim Weander, the Omaha area’s district engineer for the Transportation Department.

Weander said traffic flow on the Interstate will benefit from addressing problem points. At the same time, he said, the Interstate is showing wear and will need maintenance work; more than half of the spending is targeted for highway “preservation” projects.

Weander acknowledged that adding capacity to the Interstate could draw in more traffic than officials expect, cutting into the travel time they expected to gain. But he said the state couldn’t possibly afford to build an Interstate that flows freely at all times.

“I think other cities have shown you can’t build your way out of congestion,” Weander said.

Omaha, with its long-cherished status as a “20-minute city,” has seen its traffic grow worse as the city steadily adds people and expands farther into the suburbs.

The Omaha metro area hardly experienced the full gridlock of other major metro areas. But Omaha is in a place where other cities with much worse traffic were decades ago.

Greg Youell, executive director of MAPA, said traffic is one of the growing pains for the Omaha region. If the metro area continues to be successful in the future, he said, it will experience more pressure on its transportation system.

“You would see a significant degradation of our system if we don’t continue to address where the needs are,” Youell said.

One major topic left unaddressed in the study’s latest phase is the question of boosting mass transit to get more drivers off the roads.

But in 2017, an earlier phase of the study called for comprehensive, multimodal improvements to the metro area’s transportation system: implementation of the Dodge Street bus rapid transit line, creation of further rapid bus lines and addition of a midtown-to-downtown streetcar.

But it’s clear, Simon said, “We can’t just keep widening our way out of this.”

Omaha streets and how they got their names

What's in an ORBT? Check out Omaha's new buses

Metro transit showed off its fleet of new buses for its rapid transit line, which is scheduled to debut this fall.

If the City Council approves, Omaha voters will decide May 12 whether the city can issue the bonds for street work.

Drivers beware: These are Omaha's worst hills in the winter

With ice and snow and winter upon us in full, The World-Herald cast out to find the worst wintry driving hills in Omaha.

What is a 'diverging diamond'? Omaha-area drivers will find out

The traffic flow is definitely different — through the middle of the interchange, drivers cross over to the other side of the road.

Editorial: Interstate work is unavoidable, but public transportation is vital too

Road planning always involves planning for the long term. The newly announced plans for additional lanes and other changes for Interstate 80 a…

Best of the weekend: Risk of flooding elevated in Nebraska, Iowa; I-80 to be rebuilt through Omaha — and 6 other must-read stories

Driving to work alone isn't the dream of all Omahans

The specifics of the new plan — how it would treat street projects, mass transit upgrades or changes like bike lanes — are still to come. But it’s clear the plan will favor a more multimodal future.

ORBT is the new bus line coming to Omaha later this year. It’s meant to be a quicker, more efficient bus ride than the regular Omaha bus lines.

The bike lanes would be the Bluejay Bikeway on Burt Street from 16th to 24th Streets and the Market to Midtown Bikeway on Harney Street from 10th Street to Turner Boulevard.

Officials anticipate a price tag of $45 million to $50 million for the group of projects. The work will be done in phases and could be completed by the end of the 2023 construction season, depending on weather and other factors.

Metro transit is discouraging all nonessential bus travel and rides on its MOBY service.

Traffic plunges across Nebraska amid pandemic. But are we still driving too much?

Data shows an incredible turn as society pivots in response to the pandemic: Interstate traffic is down by 41% from Lincoln to Iowa.

With I-80 construction starting this summer, will the Omaha area see traffic tie-ups?

State transportation officials estimate Interstate traffic in Omaha has dropped some 40% during the coronavirus pandemic.

Lauren Cencic is in line to take leadership of the transit agency as Metro looks to expand and community interest in transit increases.

For the rest of this year, drivers can expect 168th Street to be closed to through traffic from Pacific Street to West Center Road.

The interstate system in the Omaha metro area would be rebuilt under a new $860 million plan from the Nebraska Department of Transportation. 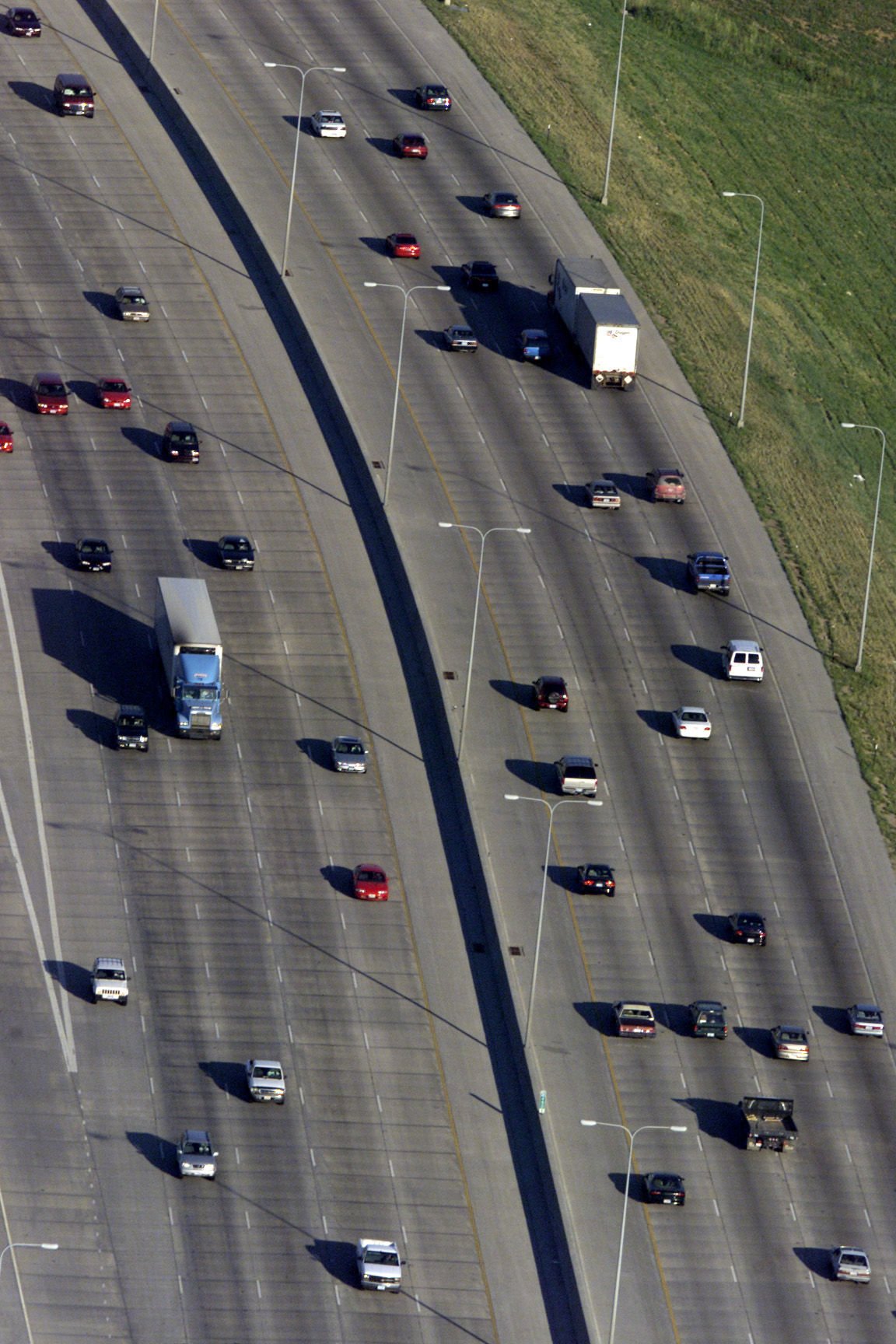 Changes to Interstates 80, 480 and 680, the Kennedy Freeway, West Dodge Road and the West Dodge elevated expressway could take 25 years and cost $860 million.