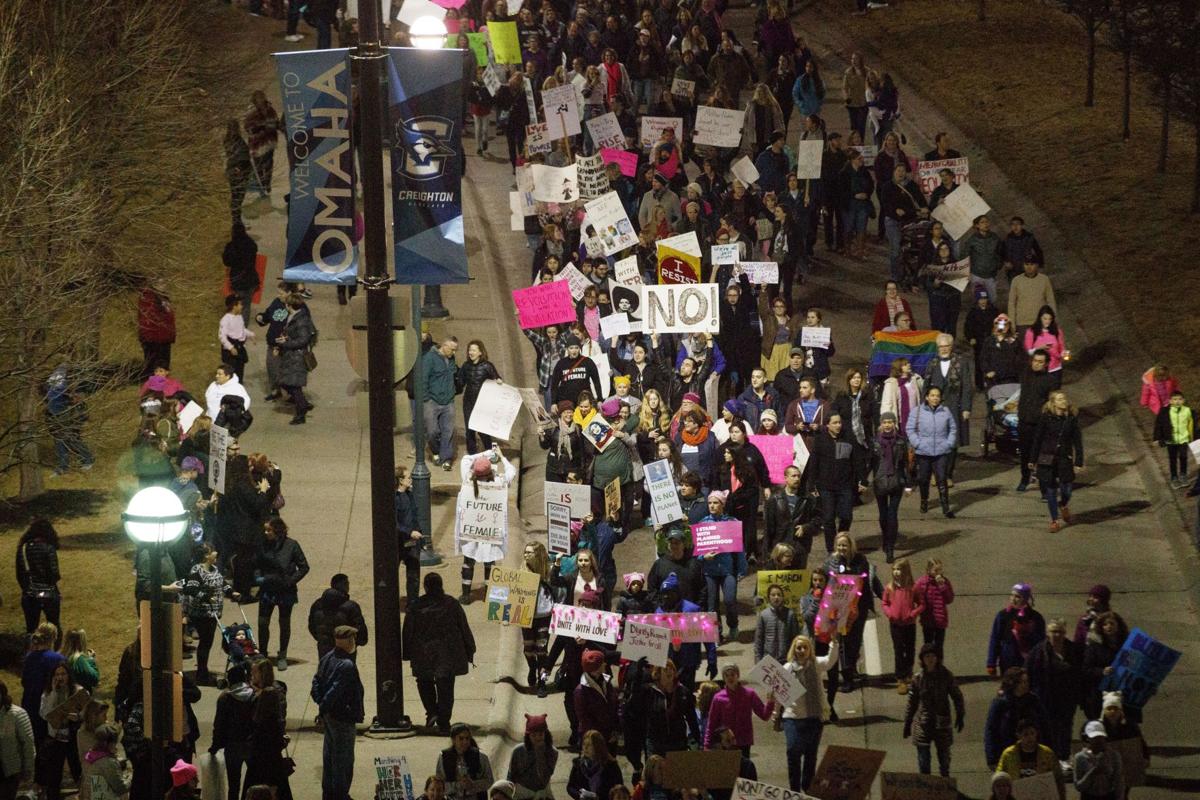 People march down 10th Street toward the CenturyLink Center on Saturday, Jan. 21, 2016, during the Women's March on Omaha. Women's marches were held throughout the country. 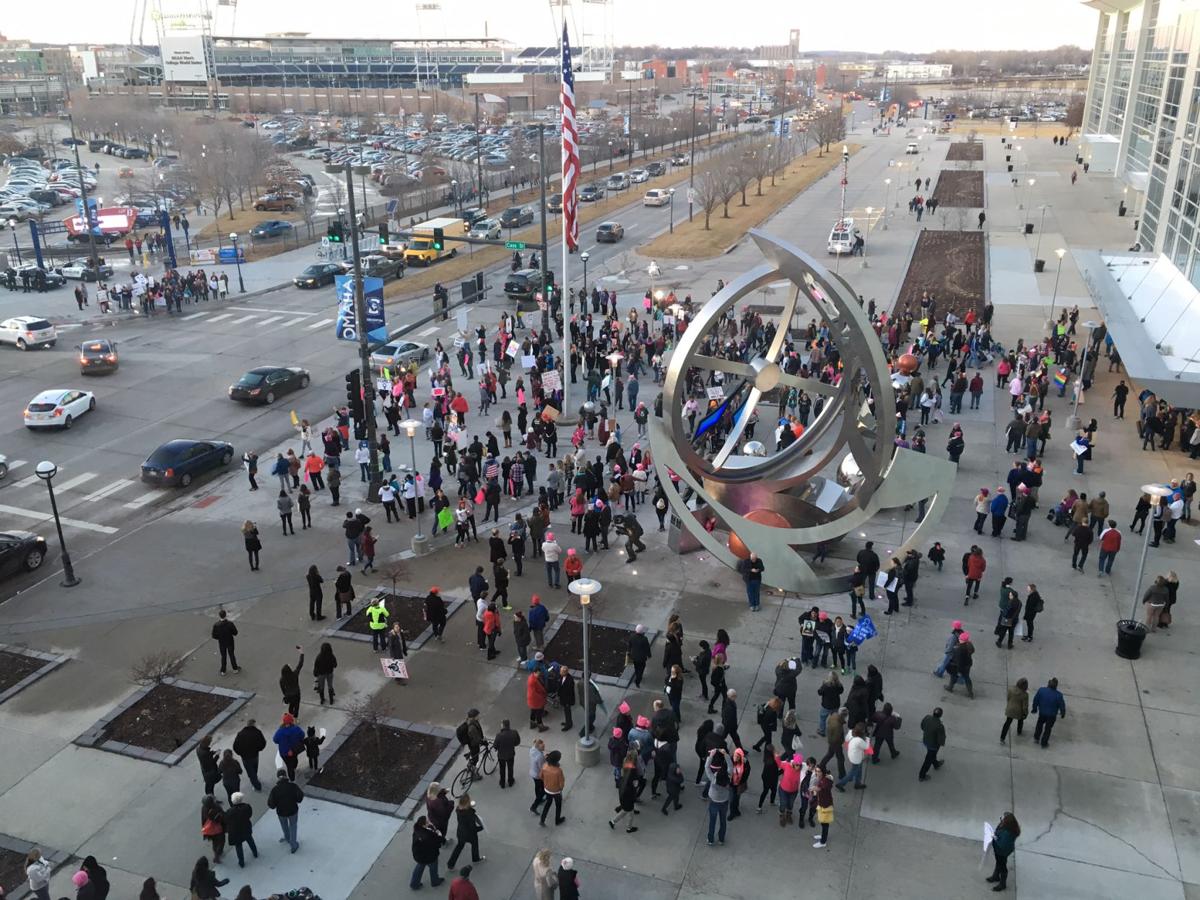 A crowd gathers outside the CenturyLink Center ahead of the Women's March on Omaha on Saturday. 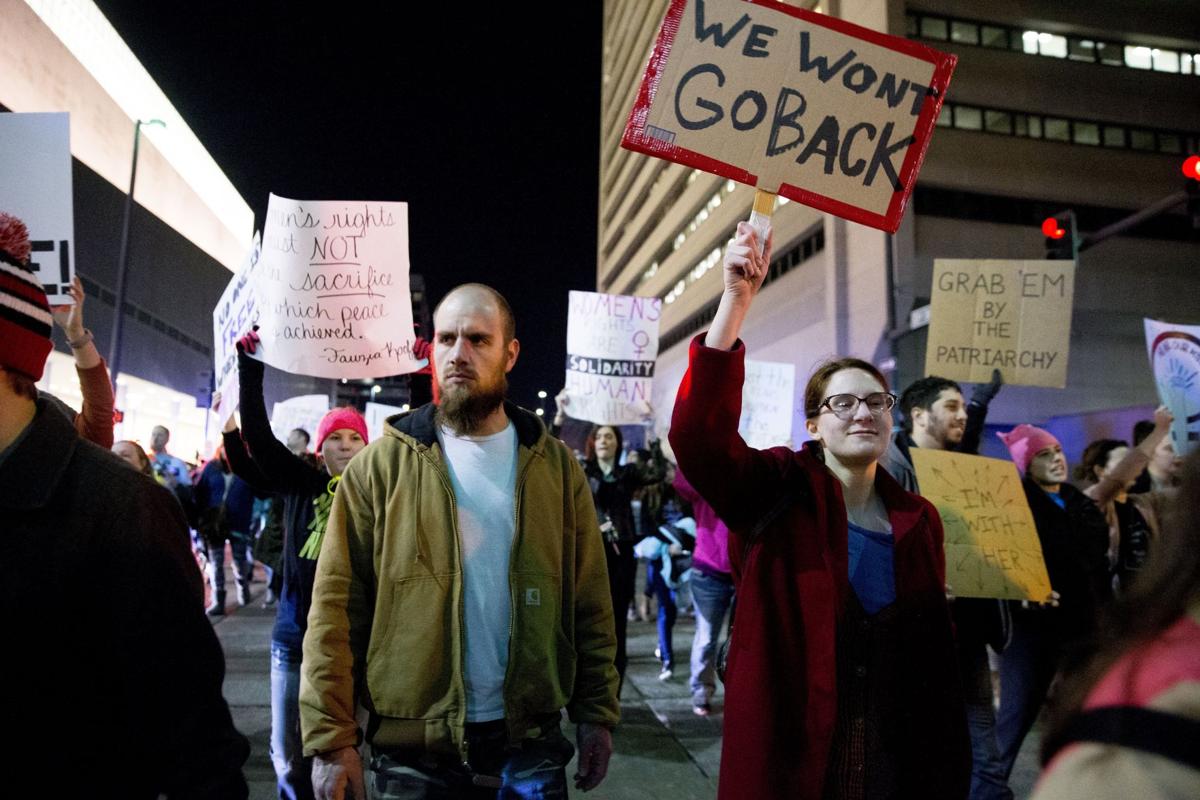 Josh Wren, left, and Kelsey Leinen, right, march down 13th Street on Saturday, Jan. 21, 2016 during the Women's March on Omaha. 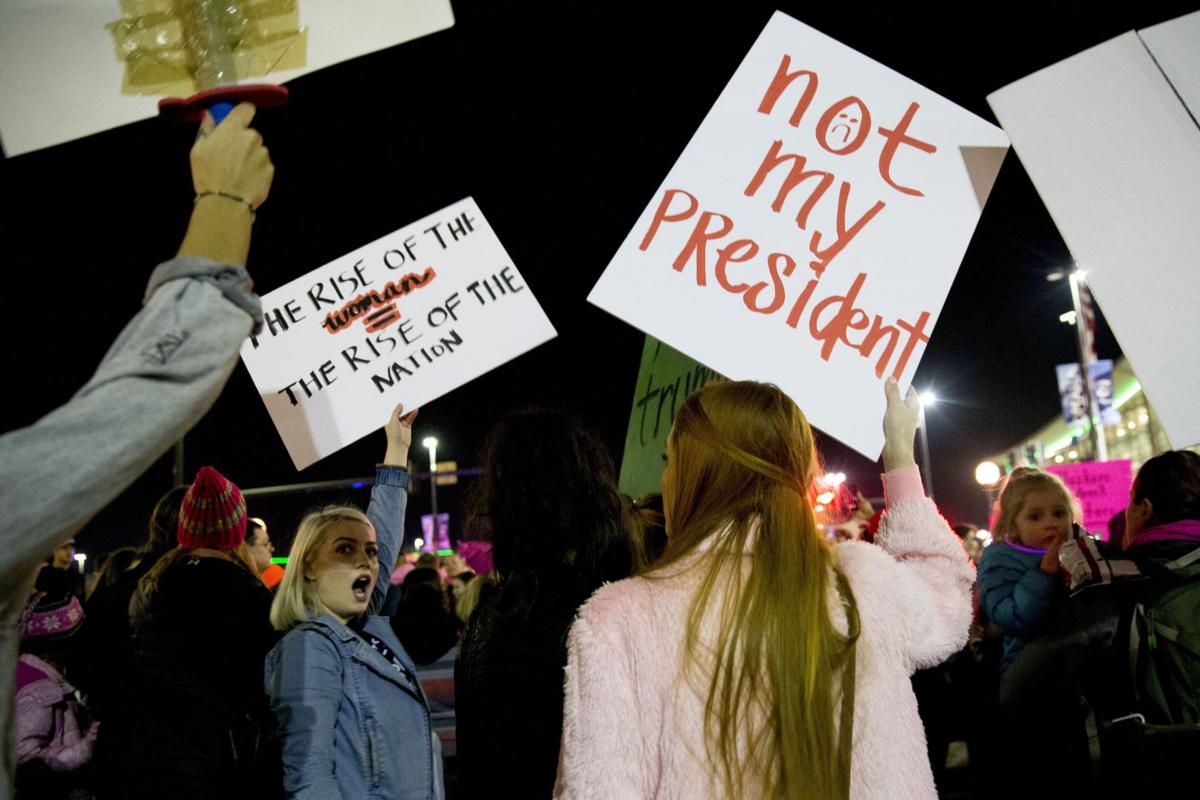 Anna Rosenlof, left, cheers as people march toward the CenturyLink Center on Saturday, Jan. 21, 2016, during the Women's March on Omaha. 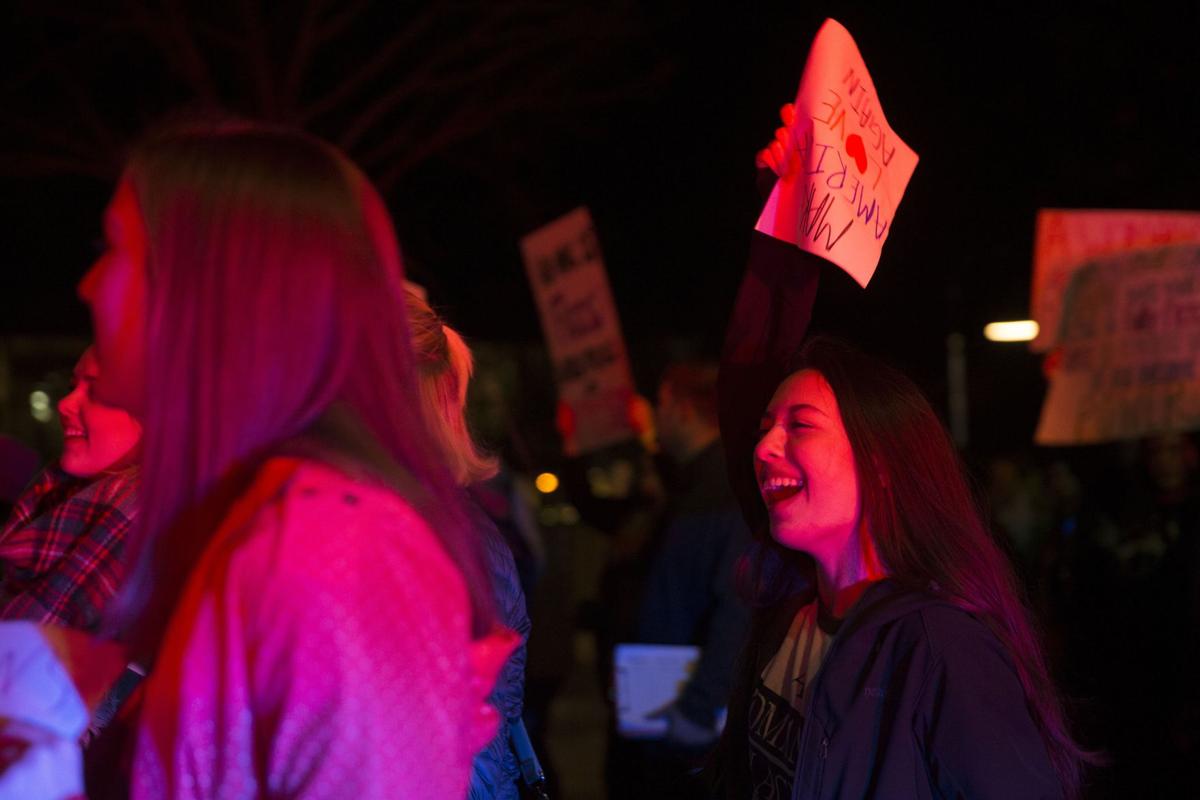 Downtown Omaha echoed with loud chants of “Love trumps hate!” on Saturday as thousands of marchers filled the streets in one of the biggest protest rallies in the city’s recent memory.

Police estimated between 12,000 and 14,000 women, men and children participated in the Omaha women’s march — a crowd size that far exceeded organizers’ expectations of 2,000 to 4,000 participants.

“I’ve been in traffic seven years and this is easily — without a doubt — the biggest rally we’ve ever worked,” said Sgt. Jerry Martinez of the Omaha Police Department. “It was peaceful. No problem.”

Organizers were beyond thrilled.

“We started with a room for 500 and exponentially grew from there on Facebook. This is beyond our wildest dreams,” said Alex Garrison, one of the (female) organizers of the Women’s March on Omaha.

The march was part of a national and international movement, as women’s marches were held across the U.S. and in international cities in the wake of President Donald Trump’s inauguration Friday.

Lincoln police estimated between 2,000 and 3,000 took part in that city’s march, although volunteers estimated far more than that participated. “I’ve never seen anything like this in Lincoln before,” said Sue Ellen Wall, a Lincoln resident.

Many protesters in Omaha readily acknowledged that Trump won the election, but several said they came to send a message to their congressional representatives that they expected them to hold Trump accountable. Several also said they wanted to send a message to Trump that he represents all Americans now, whether or not they voted for him in November.

“He needs to know our voices count too,” said Stephanie Brown, 36, a business analyst from Omaha who voted for Democrat Hillary Clinton.

Mary Bircher, a harpist with the Omaha Symphony, echoed Brown’s comments. “Donald Trump is our president too, and we need to be represented,” she said.

The crowd included young and old, women and men. In fact, it appeared at times during the pre-rally speeches that nearly 30 percent to 40 percent of the participants were men. Former U.S. Rep. Brad Ashford and State Sen. Tony Vargas both attended.

Joy Becker, 23, said she worries that Trump’s style, which she characterized as authoritarian, poses a threat to this nation’s democracy. Specifically, the Lincoln woman cited Trump’s frequent attacks on the news media and his friendly relationship with Russian President Vladimir Putin as grounds for her worries.

In Lincoln, one woman said Trump’s views on immigration could have far-reaching consequences for her life. Claudia Pech identified herself as a Dreamer, or a child brought to this country as a young girl by parents who did not follow this nation’s immigration laws.

Trump has vowed to end a program started by then-President Barack Obama that allowed people such as Pech to remain in this country without fear of deportation.

The program “is being threatened by Trump, so I wanted to let people know we are here,” she said. “We’re part of what makes America great again.”

The march in Omaha began about 6 p.m. It was so large that at times it stretched for 14 blocks, from the CenturyLink Center to the Old Market. It was also loud, with protesters jubilantly hollering chants and spontaneously erupting in cheers.

Police blocked off traffic for the marchers, forcing some motorists to wait for more than 30 minutes.

Bill Laird couldn’t have been happier about being stopped in traffic at 13th and Douglas. “This is Omaha, Nebraska, right?” he asked incredulously as the marchers filed past.

Laird got trapped as he attempted to pick up his wife from the rally.

“This is amazing,” Laird said. “This is totally impressive.”

Weary but exhilarated, Nebraskans and Iowans soak up festivities in Washington, D.C.

Thousands of Nebraskans and Iowans traveled to the nation’s capital to see Friday’s transfer of power firsthand.

Trump voters from Nebraska are excited to witness history at inauguration

They are in a celebratory mood, believing — even despite personal reservations some have — that Trump is America’s answer.

Grace: Nebraska women will march on Washington, Omaha and other cities after Trump's inauguration

Though not officially a protest of Donald Trump’s presidency, the Women's March on Washington certainly looks that way. It is being held one day after Trump’s inauguration, and its organizers say explicitly that they hope to “send a bold message to our new government on their first day in office, and to the world, that women’s rights are human rights.”

In a global exclamation of defiance and solidarity, more than 1 million people rallied at women's marches in the nation's capital and cities around the world Saturday to send President Donald Trump an emphatic message on his first full day in office that they won't let his agenda go unchallenged.

Trump supporters see a long-overdue rejection of political correctness, a commitment to scale back the reach of government and a willingness to tackle problems head-on and speak up for parts of the country that feel left out.

Washington’s event drew hundreds of Nebraska and Iowa marchers, including two busloads from Omaha, as well as many others who drove or flew.

UNL spokesman Steve Smith said comments allegedly came from some men at Phi Gamma Delta, or “Fiji.” He said the investigation will focus on “students who allegedly engaged in verbal harassment” and not on an entire fraternity.

Other speakers scheduled for the Mom’s March for America at the Ralston Arena include Candy Carson, the wife of Ben Carson, secretary of the Department of Housing and Urban Development and a 2016 presidential candidate; “Duck Dynasty” star Missy Robertson; actress and radio talk show host Sam Sorbo; and country band Redhead Express.

Women’s March in Omaha will be Saturday afternoon

A group of women will again converge on downtown Omaha this weekend as part of the national Women’s March movement.

People march down 10th Street toward the CenturyLink Center on Saturday, Jan. 21, 2016, during the Women's March on Omaha. Women's marches were held throughout the country.

A crowd gathers outside the CenturyLink Center ahead of the Women's March on Omaha on Saturday.

Josh Wren, left, and Kelsey Leinen, right, march down 13th Street on Saturday, Jan. 21, 2016 during the Women's March on Omaha.

Anna Rosenlof, left, cheers as people march toward the CenturyLink Center on Saturday, Jan. 21, 2016, during the Women's March on Omaha.