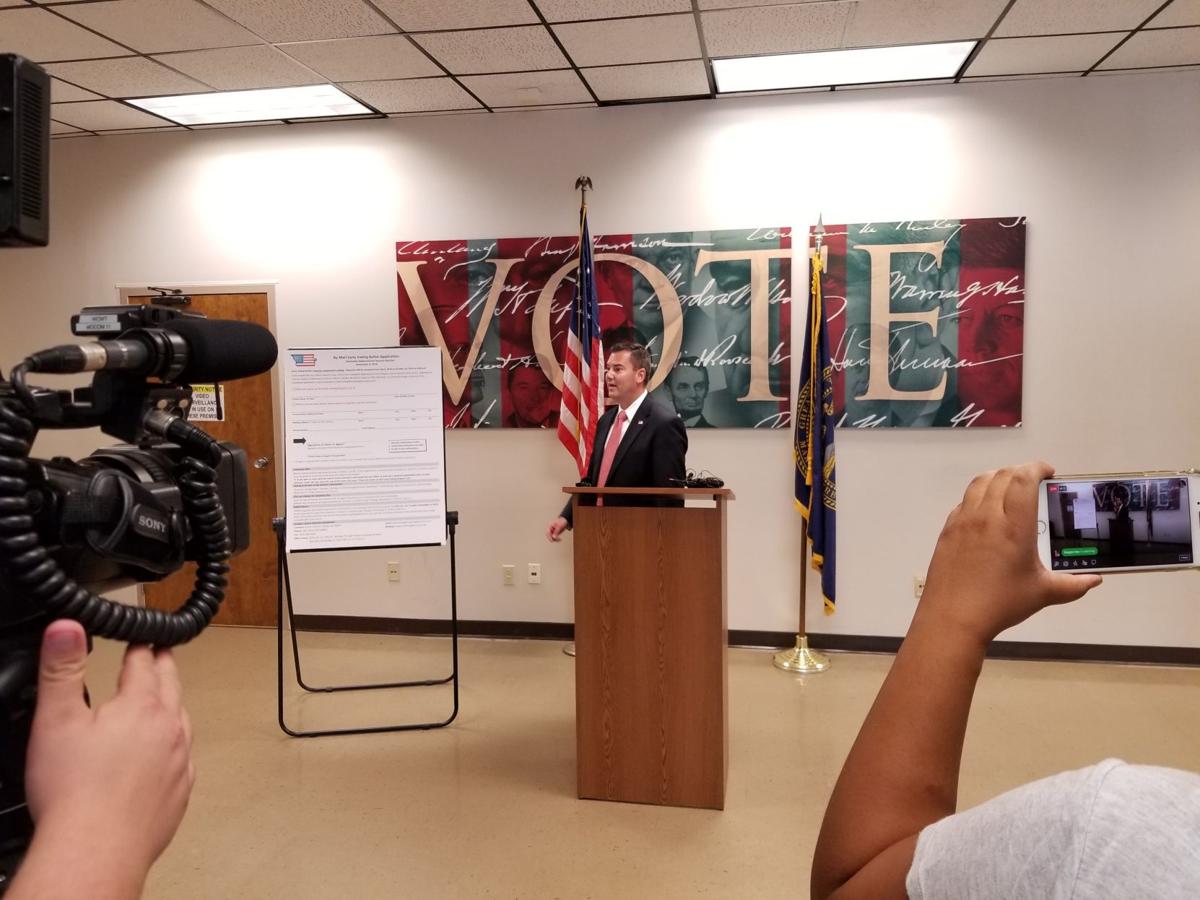 Douglas County Election Commissioner Brian Kruse says voters need to “opt in” to be on the list and a prechecked box isn’t the same as choosing. 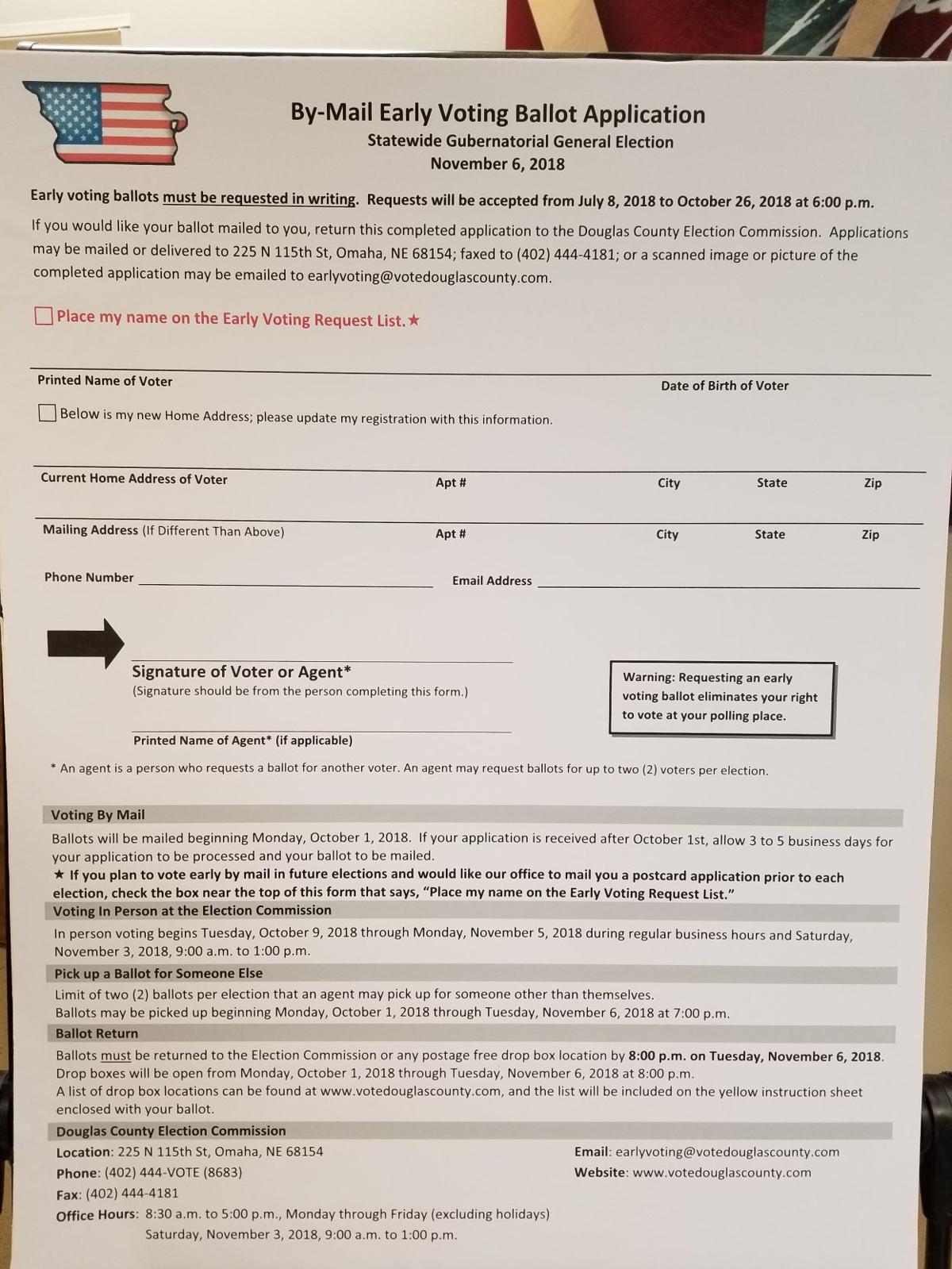 A look at the new postcard that Douglas County voters could receive if they sign up to be on the early voting list.

With early voting an increasing part of every Nebraska election, Douglas County officials on Wednesday announced a new list that makes it easier to get an early ballot in the mail.

Voters can join the new early voting mailing list and skip at least one step in the process of requesting a ballot, Douglas County Election Commissioner Brian Kruse said.

Those on the list will automatically receive a postcard in the mail before each election to sign and return for an early ballot. All voters need is a stamp.

No more trips to the county election office to request a ballot. Less need to remember the deadline for early ballot requests for each election.

All you have to do to join the list is visit the Election Commission website, www.votedouglascounty.com, and print the early ballot request form, or call and request the form by phone: 402-444-VOTE (8683). Once you have the form, check a box to join the list and return it.

In Douglas County, more than a third of the ballots in the 2016 presidential election were cast early. In off years, around a fifth of votes come early.

The postcard, Kruse said, is the most cost-effective way to follow state law, which allows early voting for any reason but requires that people sign a request for an early ballot.

In the Nebraska counties where such lists are used, including Lancaster and Lincoln Counties, turnout has nudged upward, particularly in off-year elections, election officials there say. Gage County also keeps a list.

In Douglas County, as elsewhere, the goal will be to send out the postcards several weeks before mailing early ballots for each election. Experience has shown that people on these early voter lists return ballots sooner than early voters as a whole.

That allows those early votes to be sorted and prepared for counting ahead of later-arriving early votes, Kruse said, requiring less temporary staffing, and should allow the county to post more results earlier on election night.

Early voting work for this May’s primary election in Douglas County required 129 hours of overtime, officials said. That’s costlier than the postage and printing of the cards, Kruse said.

He knows because of an experiment the county tried in 2016, when it spent $125,000 to mail early voting cards to all county voters. About 70 percent of those who returned the cards voted within four weeks of receiving them.

Douglas County Board members P.J. Morgan, a Republican, and Chris Rodgers, a Democrat, praised the opportunity to save taxpayers money and ease workloads at the Election Commission.

The change also likely sets off a scramble between the Republican and Democratic Parties at the state and county levels to make certain that neither party seizes an advantage.

Kenny Zoeller, executive director of the Nebraska Republican Party, said his party would continue to work hard for every vote, “whether it is cast early by mail or on Election Day.”

Jane Kleeb, chairwoman of the Nebraska Democratic Party, said early voting by mail is easy and secure. Permanent vote-by-mail lists like this one, she said, “save taxpayers money.”

Michael Knebel, chairman of the Nebraska Libertarian Party, said all parties should agree about the value of saving voters time and money. His party would like to see such voter lists statewide, he said.

The party was more aggressive in the late 1990s and early 2000s about making sure people who voted early as Democrats were encouraged to join the county list, Shively said.

These days, he said, Republicans have nearly caught up, with each party having more than 10,000 people on the list. But Republicans hold about a 9,000-vote registration advantage in the county.

Shively, who was appointed to his post by then-Gov. Mike Johanns, a Republican, said the people who want to join the list are already among the county’s most frequent voters, so it shouldn’t tilt results.

The state’s political parties know what’s at stake, he said, so they’ll be ready. The impact is more likely to be felt on the margins in lower-turnout elections, like votes on school bonds and for city offices, he said.

Some in the state GOP, including Zoeller and at least one member of Gov. Pete Ricketts’ political team, expressed concern to Kruse about the list’s potential to boost Democratic turnout, particularly in lower-profile elections.

Kruse acknowledged hearing concerns from fellow Republicans, though he declined to share them. He said the early voting list helps his office move toward making voting more accessible to the residents of Douglas County. And both parties start at zero, with no names on the list.

The Republican answer to this year's uptick in energy and interest from Democratic voters is a push toward greater unity. GOP officeholders hammered that theme in speeches Saturday during the state convention of the Nebraska Republican Party.

On the issue of abortion, the contrast could not be clearer in this year's race to represent Nebraska's 2nd Congressional District.

Most of Nebraska's top Republicans declined to say how they would have voted. That list includes Gov. Pete Ricketts, Sens. Deb Fischer and Ben Sasse and Rep. Jeff Fortenberry, who represents much of eastern Nebraska.

Lincoln City Councilwoman Jane Raybould is a Democrat running against an incumbent Republican U.S. senator in a red state. She can’t run the same race Kara Eastman did. Raybould is trying to pull off a different kind of upset.

There are still, at last count, 2,379 early votes to count Friday that arrived by drop box after the early afternoon pickup on Election Day.

As recently as 15 years ago, 7 percent of Douglas County voters cast ballots before Election Day. By the 2016 presidential election, the number approached 34 percent.

In what may be a first for Nebraska, a woman running for the State Legislature had a baby during the campaign.

Think you're on Douglas County's permanent early voting list? You aren't if box was prechecked

Douglas County Election Commissioner Brian Kruse says voters need to “opt in” to be on the list and a prechecked box isn’t the same as choosing.

A look at the new postcard that Douglas County voters could receive if they sign up to be on the early voting list.