In Council Bluffs, Bernie Sanders says his ideas are no longer 'radical'
1 comment
Share this
Only $5 for 5 months

Four years ago, Vermont Sen. Bernie Sanders helped spark a progressive wave, inspiring legions of devoted supporters in a presidential primary in which he won 23 states.

His campaign fell short, but it elevated ideas — such as “Medicare-for-all” and tuition-free college — that in a few short years have become centerpiece issues for a new wave of Democratic activists and leaders.

“A lot of the things he was saying in ’16 or ’15 were out of the mainstream,” Pottawattamie County Democratic Chairman Scott Punteney said. “And people came around to that way of thinking.”

On Thursday in Council Bluffs, Sanders made his first Iowa appearance since his official announcement as a 2020 candidate.

At the Mid-America Center, Sanders asserted his spot as a leader of the progressive wave.

Said Sanders: “The ideas that we were talking about (in 2016) were considered by establishment politicians and mainstream media to be ‘radical’ and ‘extreme’ — ideas, they said, that nobody in America would support ...

“Well, today, virtually all of those ideas are supported by a majority of the American people and have overwhelming support from Democrats and independents.”

He drew cheers from the crowd of several hundred when he talked about his mainstay issues like Medicare-for-all, tuition-free education, raising the minimum wage and billionaires paying more taxes.

But he also spent time, and got a positive reaction, promoting criminal justice reform, promising to take on “the fossil fuel industry” and vowing to root out institutional racism. 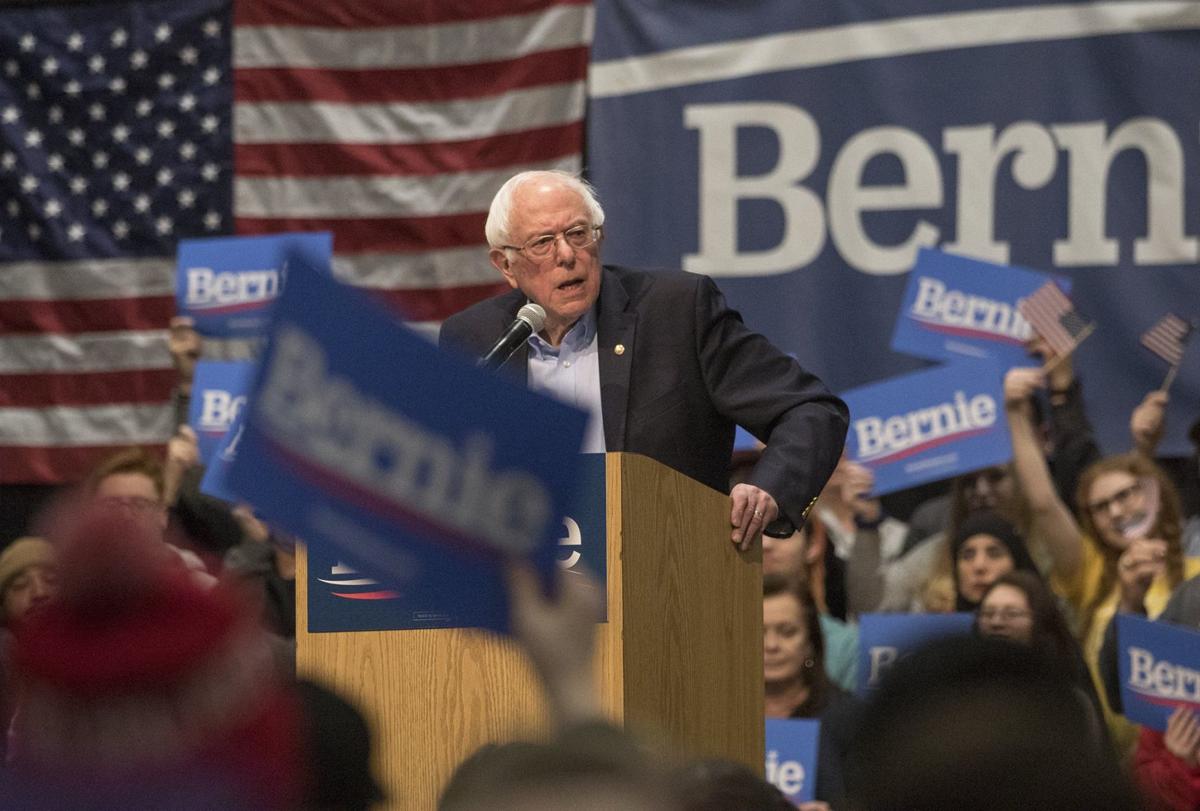 Sen. Bernie Sanders speaks at the Mid-America Center in Council Bluffs in March. He narrowly lost the Iowa caucuses in 2016. 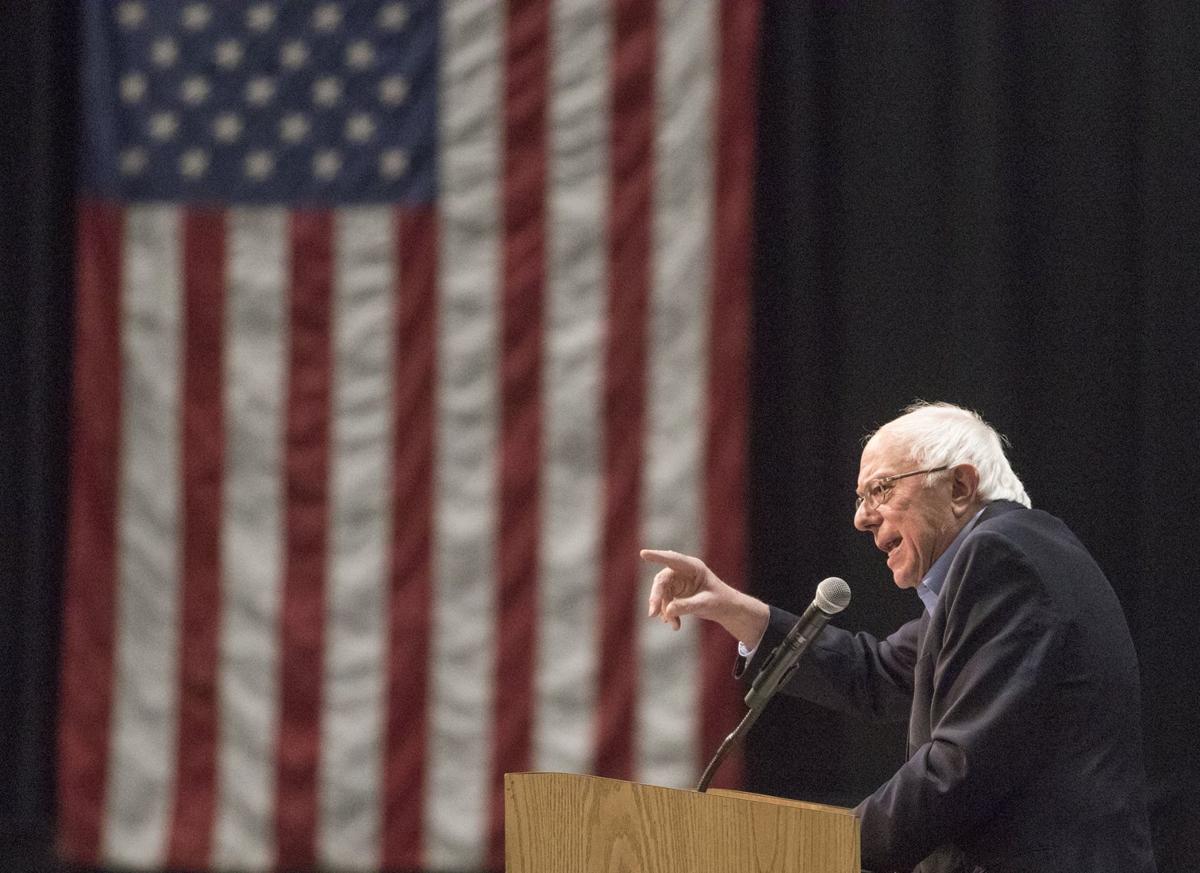 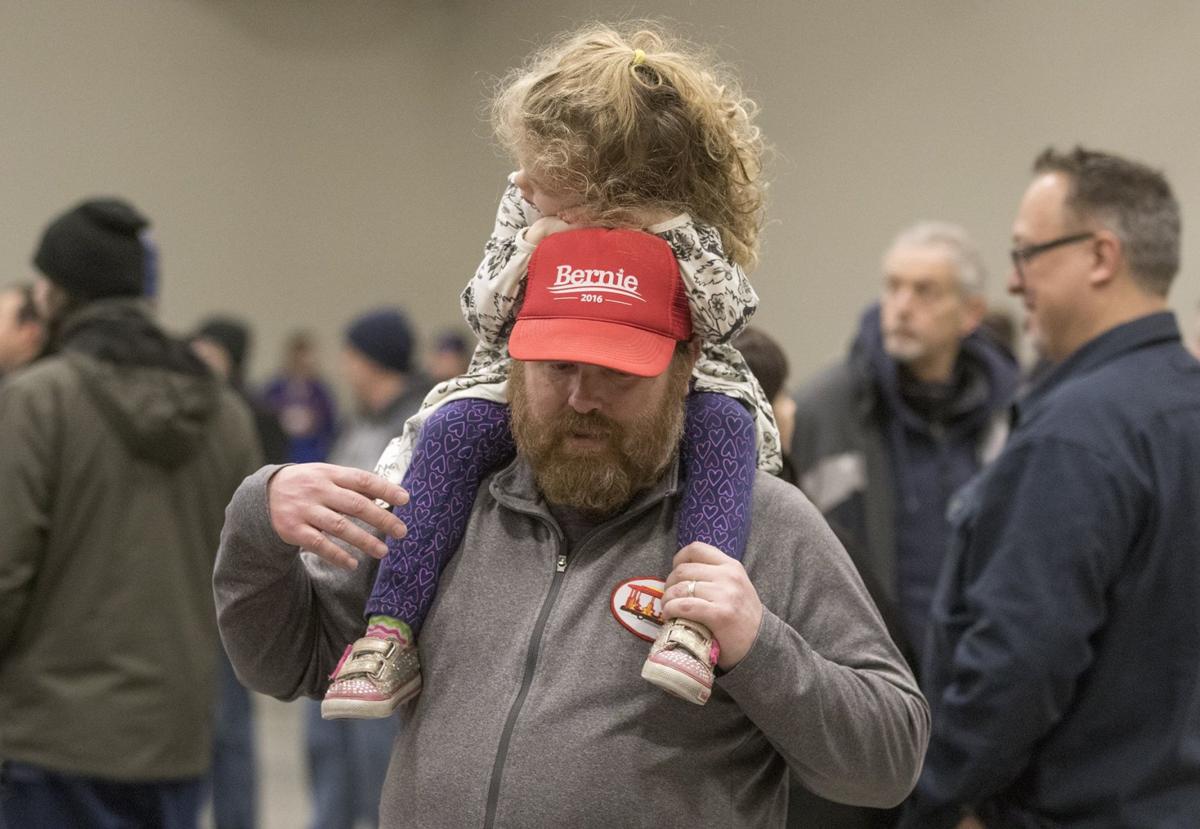 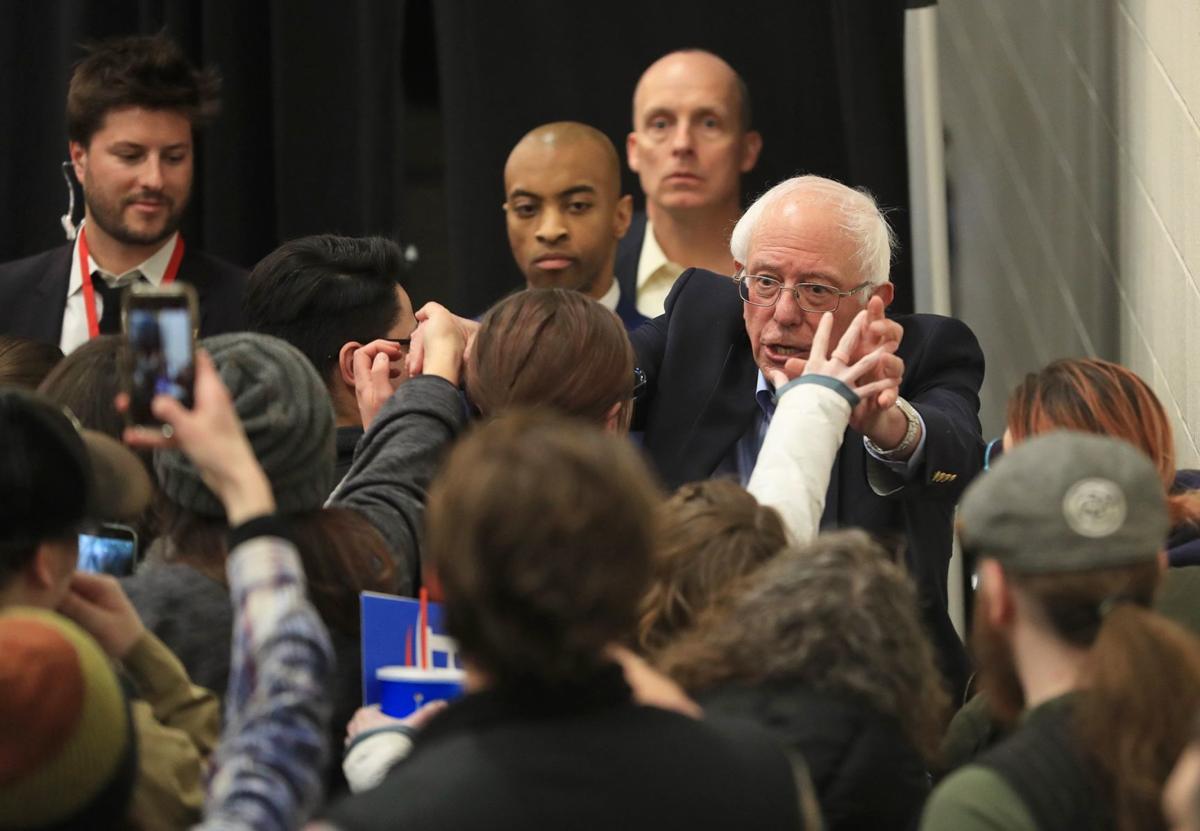 Sen. Bernie Sanders greets the crowd at a rally in Council Bluffs on Thursday. 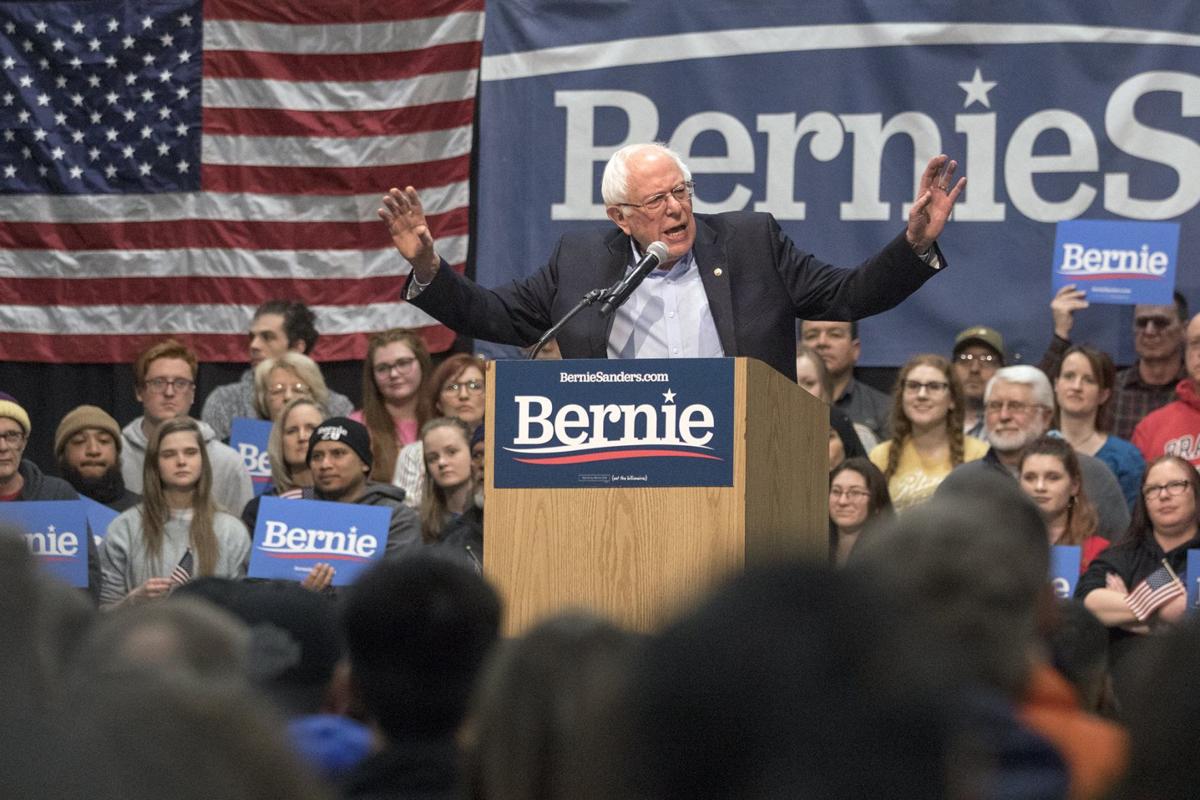 Sen. Bernie Sanders speaks in Council Bluffs on Thursday. He said the positions he took in the 2016 campaign were viewed as "radical" by "establishment politicians" but are now "supported by a majority of the American people." 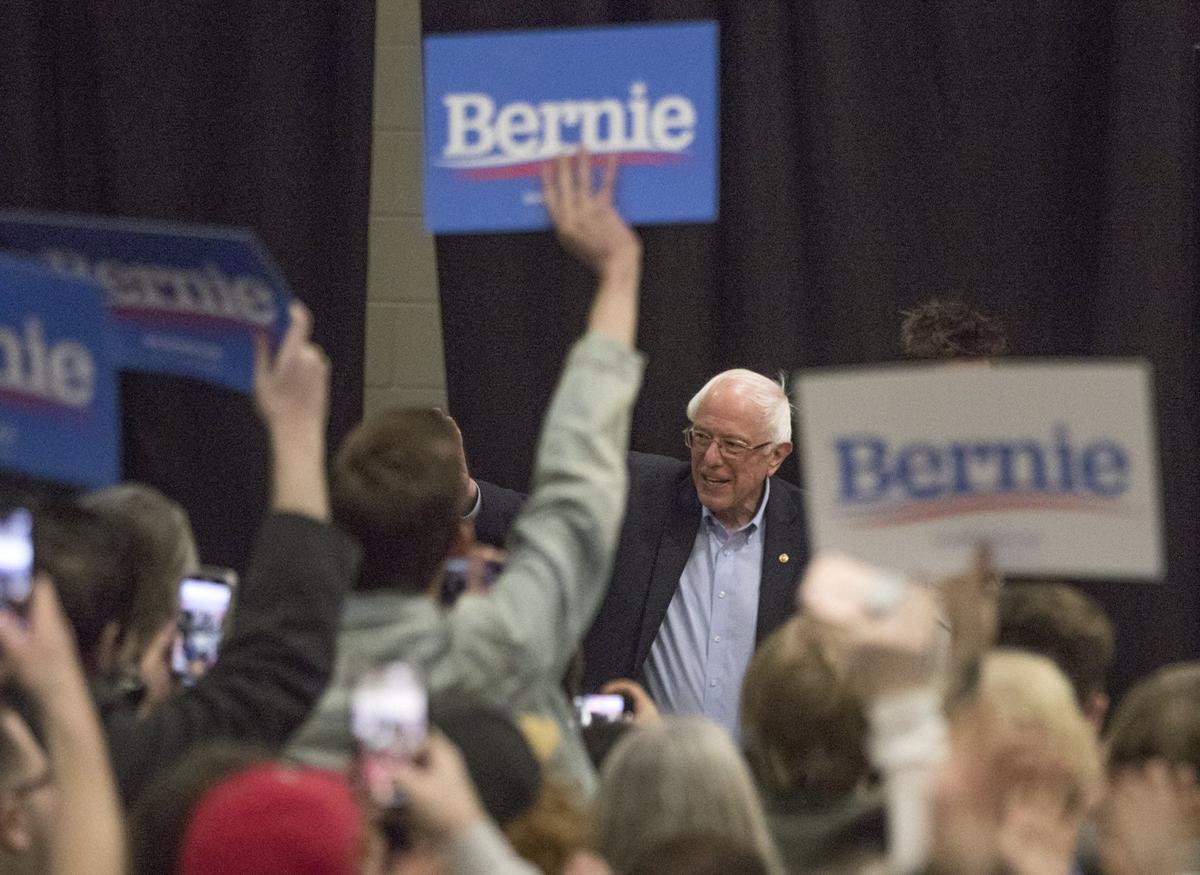 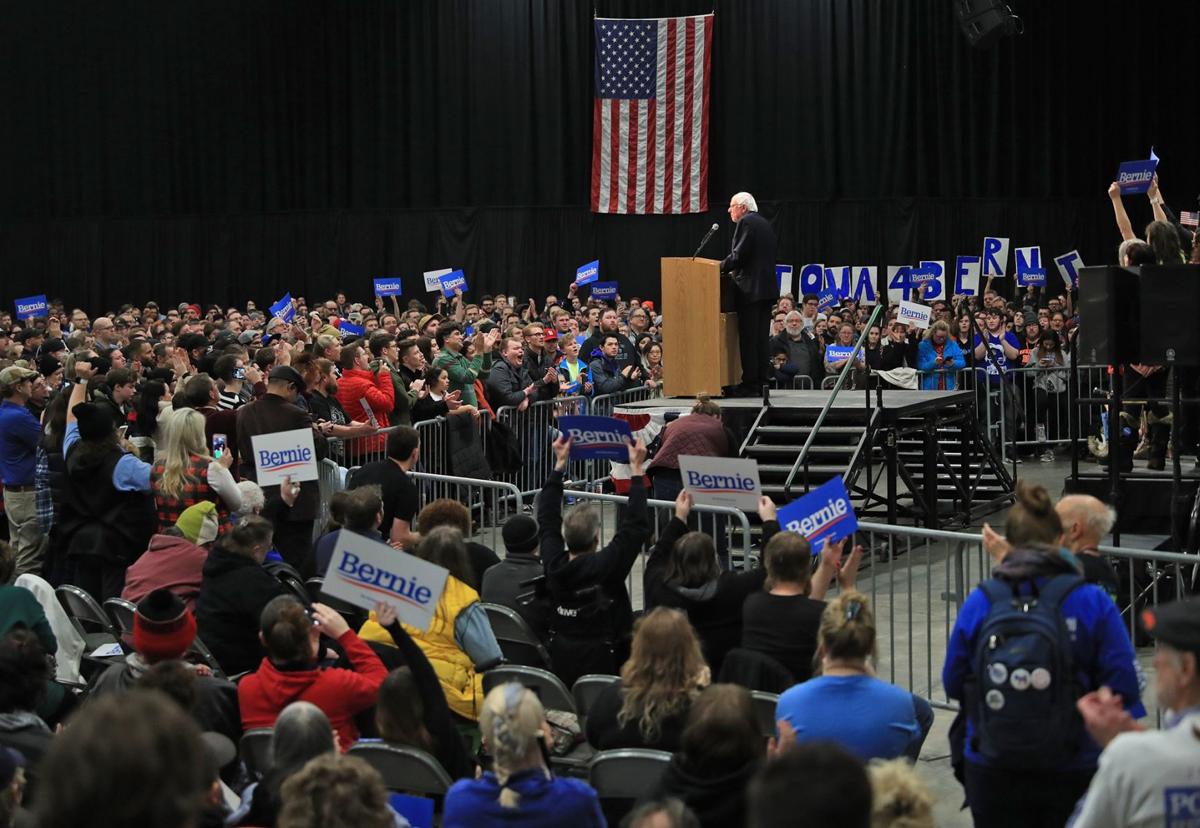 Sen. Bernie Sanders addresses a crowd of several hundred at the Mid-America Center on Thursday. 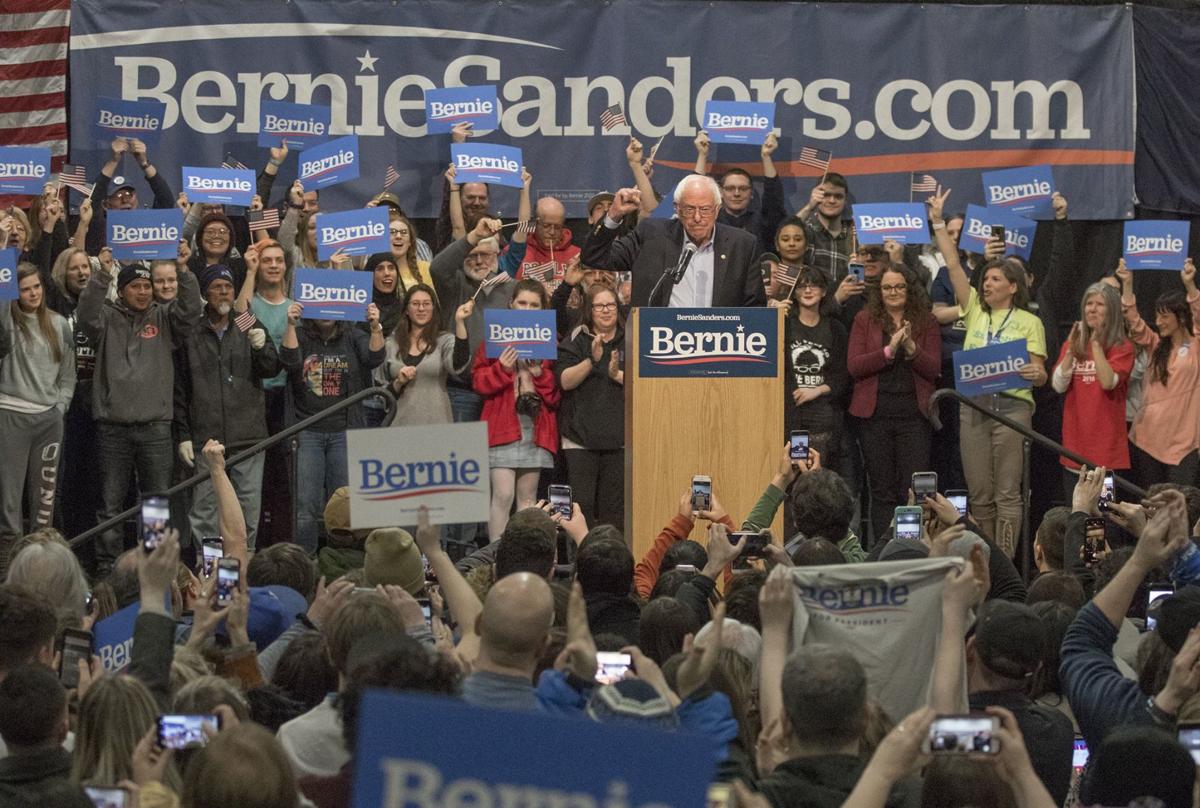 Bernie Sanders on the campaign trail in Council Bluffs on Thursday. In his speech, he asserted himself as a leader of the progressive movement. 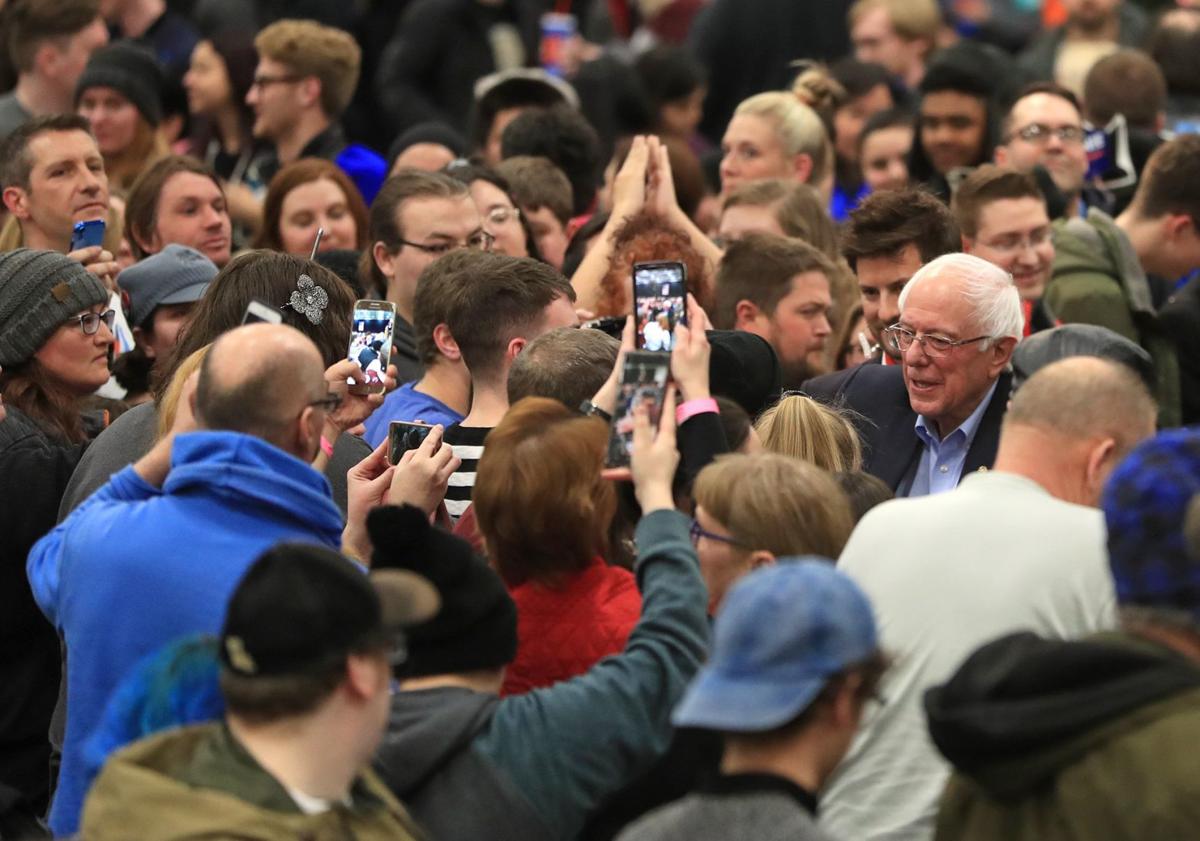 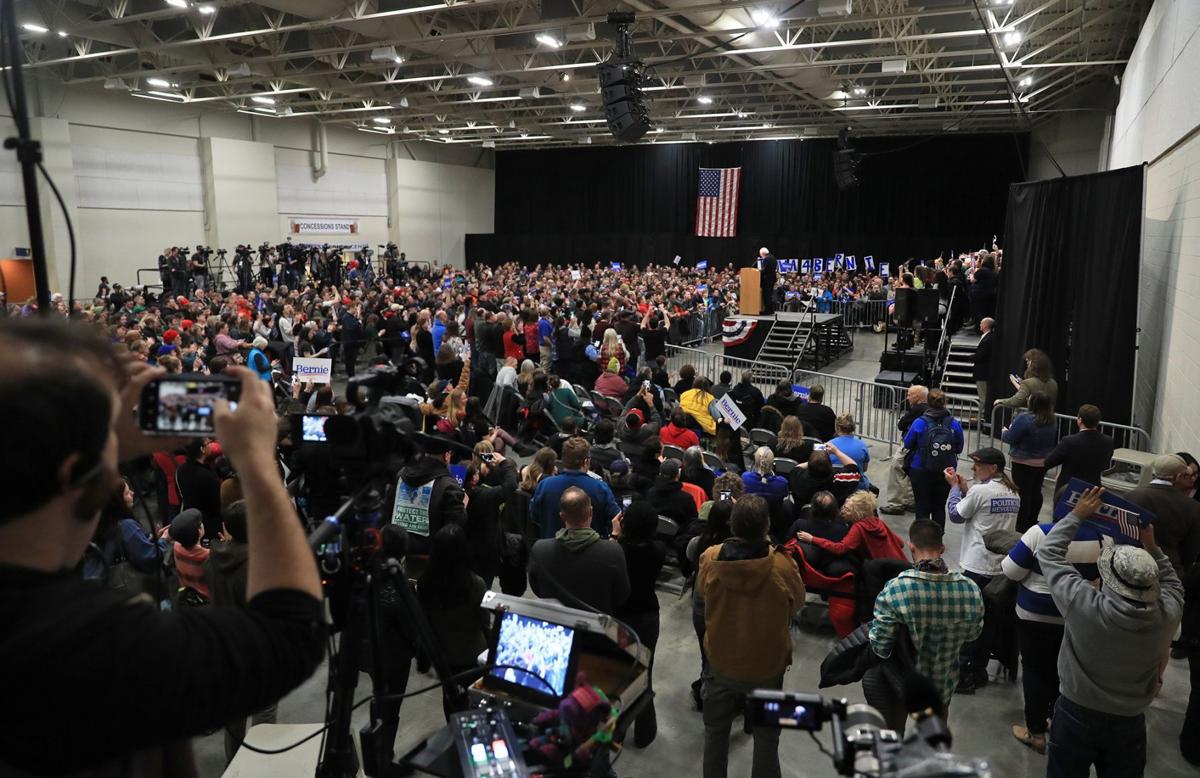 Sen. Bernie Sanders speaks at the Mid-America Center in Council Bluffs on Thursday.

On Thursday in Council Bluffs, Sen. Bernie Sanders made his first Iowa appearance since his official announcement as a 2020 candidate.

Sen. Bernie Sanders speaks at the Mid-America Center in Council Bluffs in March. He narrowly lost the Iowa caucuses in 2016.

Sen. Bernie Sanders greets the crowd at a rally in Council Bluffs on Thursday.

Sen. Bernie Sanders speaks in Council Bluffs on Thursday. He said the positions he took in the 2016 campaign were viewed as "radical" by "establishment politicians" but are now "supported by a majority of the American people."

Sen. Bernie Sanders addresses a crowd of several hundred at the Mid-America Center on Thursday.

Bernie Sanders on the campaign trail in Council Bluffs on Thursday. In his speech, he asserted himself as a leader of the progressive movement.

Sen. Bernie Sanders speaks at the Mid-America Center in Council Bluffs on Thursday.

In 2016, Sanders narrowly lost the Iowa caucuses, then went on to win the Nebraska caucuses. But he fell short of toppling front-runner Hillary Clinton, who went on to lose the presidency to Donald Trump.

After he lost, though, his progressive policies continued to catch fire. Elections in 2018 featured a cadre of like-minded candidates, such as Alexandria Ocasio-Cortez, who won a U.S. House seat in New York.

In Nebraska, Democratic 2nd District nominee Kara Eastman made Medicare-for-all a centerpiece of her campaign and defeated a former congressman in the primary. She ultimately lost the general election to the Republican incumbent, Rep. Don Bacon.

This time, Sanders faces a wide field in which his policies are the norm. His task will no longer be to convince primary voters of the benefits of things like universal health care — he’ll have to show why he’s the best person to lead the nation toward them.

He faces stiff competition in the primary’s “progressive lane” from fellow Sen. Elizabeth Warren of Massachusetts. Other Democratic senators in the running include Kamala Harris, Cory Booker, Kirsten Gillibrand and Amy Klobuchar. And that’s just a little more than one-third of the field, which includes a congressman, an Indiana mayor and current and former governors.

Even former Rep. John Delaney, a moderate among the candidates whose pitch includes working across party lines, has embraced the push for universal health care.

And while Sanders’ laser focus on economic issues brought those issues to the forefront, that has at times led him to be perceived as weak in other areas important to Democratic voters.

April Goettle of Lyons, Iowa, worked for the Sanders campaign in 2016 and has returned to volunteer and do some data work.

She said she likes many other candidates in the field but sees Sanders as the most ready to compete in the general election.

Iowa’s early caucuses — scheduled for Feb. 3, 2020 — are seen as a way for candidates to separate themselves from a large field of opponents.

That’s a long time away, and many voters are far from making up their minds.

“I like them all,” said Alessandra Petersen, 59, of Council Bluffs, who hasn’t chosen a candidate. “I see a vision of America going forward.”

He comes with a devoted following, he’s able to fundraise prolifically and his brand of economic populism might be able to sway some of the disaffected voters who went for Trump in 2016.

But Goldford said another economic progressive candidate could ignite voters in 2020. “One of the most effective advertising tag lines is new and improved, and to some extent, that works in the political world as well.”

Democratic Sen. Elizabeth Warren of Massachusetts strode into Iowa on Friday with all the looks of a presidential candidate, igniting Democratic frustration in the premier caucus state.

Former Colorado Gov. John Hickenlooper, a former co-owner of an Omaha brewery and restaurant, said Monday that he's running for president, casting himself as someone who has accomplished liberal goals in a politically divided state.

With thousands in a line that stretched around a strip mall, through the parking lot and around the field house, the doors to the Mid-America Center opened just before 3:30 p.m.

Axne, joining a Congress that includes the most women in history, excited to get to work

On her first day in office, the Democratic representative of Iowa's 3rd District voted for legislation that would reopen the government while temporarily putting off the question of border wall funding. A partial shutdown, she says, "hurts our economy, it hurts our workers, it hurts families."

Michael Barone: Democrats are getting out on a dangerously left-wing limb

There's an old political saying that presidential candidates appeal to their parties' wings -- left for Democrats, right for Republicans -- in…

Nebraska Democrats take platform to the left on abortion, guns and health care

The Nebraska Democratic Party pushed its platform to the left Saturday, adopting new sections supporting abortion rights, raising the minimum age to purchase a gun to 21 and a Medicare-for-all, single-payer health care system.

Ready for more politics? 2020 will be here before you know it, and here's what you can expect

As politicians consider their next moves, the state’s political leaders are thinking about the makeup of the Legislature, potential ballot initiatives and 2021 redistricting.

The two Democratic candidates for the House of Representatives, former congressman Brad Ashford and nonprofit executive Kara Eastman, both support abortion rights. But Ashford supports some restrictions on abortion while Eastman supports none

The 2020 Democratic presidential field has been filling up with a historically diverse array of candidates, including five women, four racial …

Iowa student was 'on a mission' to get ranch. Kirsten Gillibrand's campaign event couldn't stop her

In a 17-second video shared on Twitter that had been viewed more than 1 million times as of Sunday, the Iowa native could be seen working her way through the people surrounding the presidential hopeful. But when Gillibrand turned to her, Kinney, much to the delight of the crowd and the Internet, blurted, “Sorry, I’m just trying to get some ranch,” as she quickly disappeared into the throng of people.

The World-Herald analyzed voter data from Douglas and Sarpy Counties to see who the new midterm voters were. Political parties plan to capitalize on the increased attention leading up to 2020 elections.

Iowa's Steve King seeks 2020 re-election, says 'I have nothing to apologize for'

Rep. Steve King, R-Iowa, said Thursday that he plans to run for reelection in 2020 and remained unapologetic for repeatedly making offensive remarks, some of which have been widely rebuked as racist and recently led to him being stripped of his congressional committee assignments.

In youth sports, each season ends up with participation trophies handed out so everyone feels like a winner. In the Democratic presidential ca…

The senior U.S. senator from Minnesota is in Nebraska and Iowa for events that continue Saturday.

She becomes the third woman to declare her candidacy for Nebraska's 2nd Congressional District, which includes Douglas and western Sarpy Counties.

The senator running for the Democratic nomination for president hears from Iowans on flooding and infrastructure, and she fields a question about her likability.

Nebraska 2nd District Democrats lag far behind Don Bacon in fundraising, but they say it's early

U.S. Rep. Don Bacon raised roughly 10 times as much as any of his potential Democratic opponents in the first three months of 2019.

Like Nebraska, Kansas will no longer award delegates to Democratic presidential candidates via a caucus.

In a time of extremes, John Delaney bets Iowans will go for a proudly moderate candidate

The Marylander has made Iowa a central part of his campaign for president. He'd visited all 99 counties by last August, before most candidates even entered the race. "People here are mainstream Americans," he said during his latest visit to western Iowa, where he was viewing flood damage. "They value common sense."

It gives Iowans a chance to put their issues front and center at a time when many are waiting on the federal government to rebuild their lives. But is it helpful to Iowans? Or is it just a photo op?

In an interview with The World-Herald, Massachusetts Sen. Elizabeth Warren talked about plans that would dramatically change how people get their health insurance and where insurance company employees work as well as how crop subsidies and ethanol exemptions are handled.

Over 60 million across the US under heat advisories

Over 60 million across the US under heat advisories 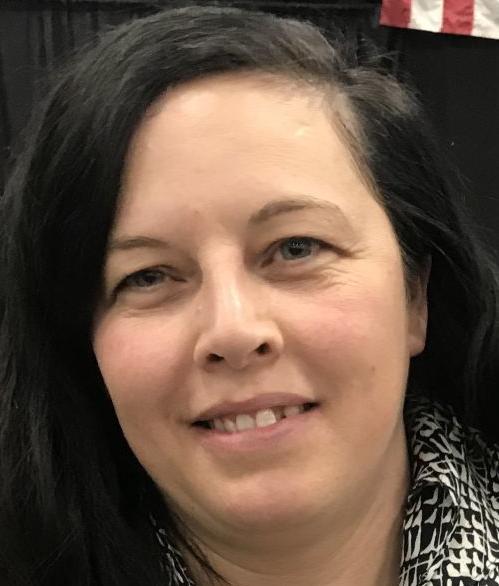 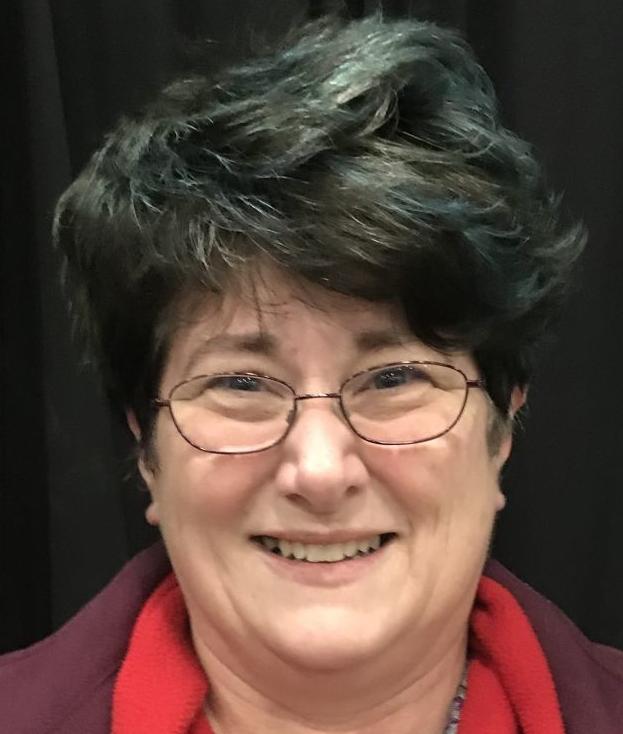