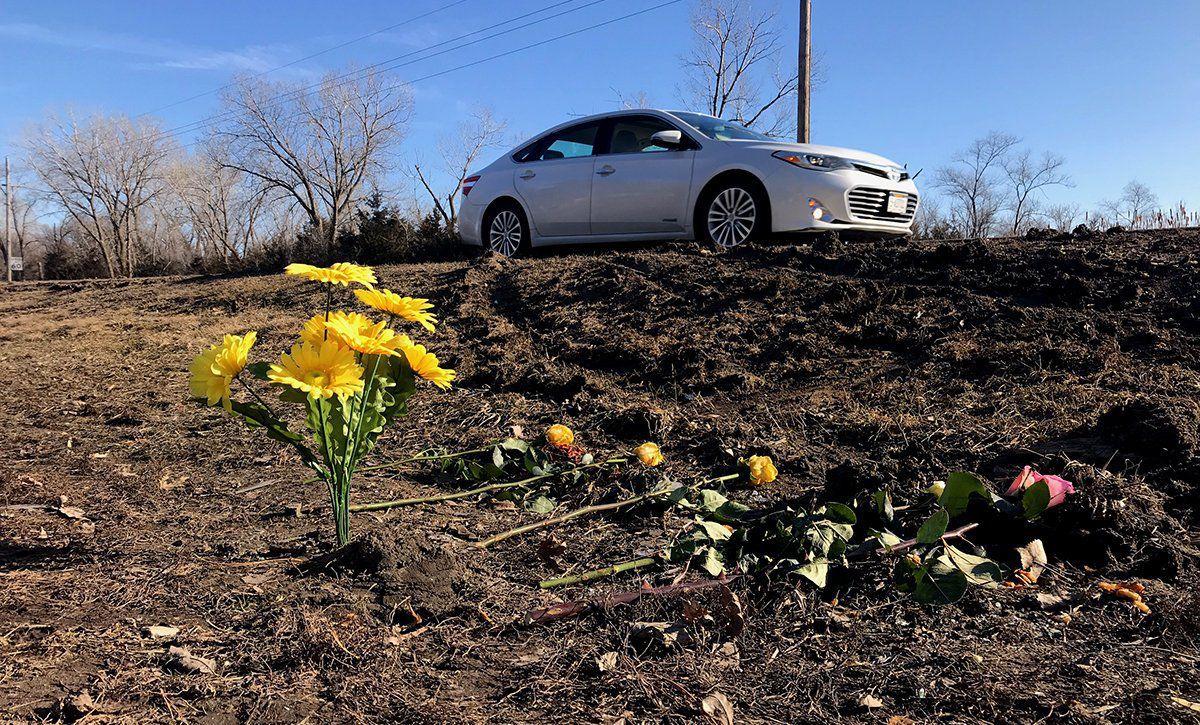 Flowers are placed near U.S. Highway 30 west of Fremont, where a three-vehicle crash on Saturday killed four people. It will be “quite some time” before the investigation into the crash is complete. 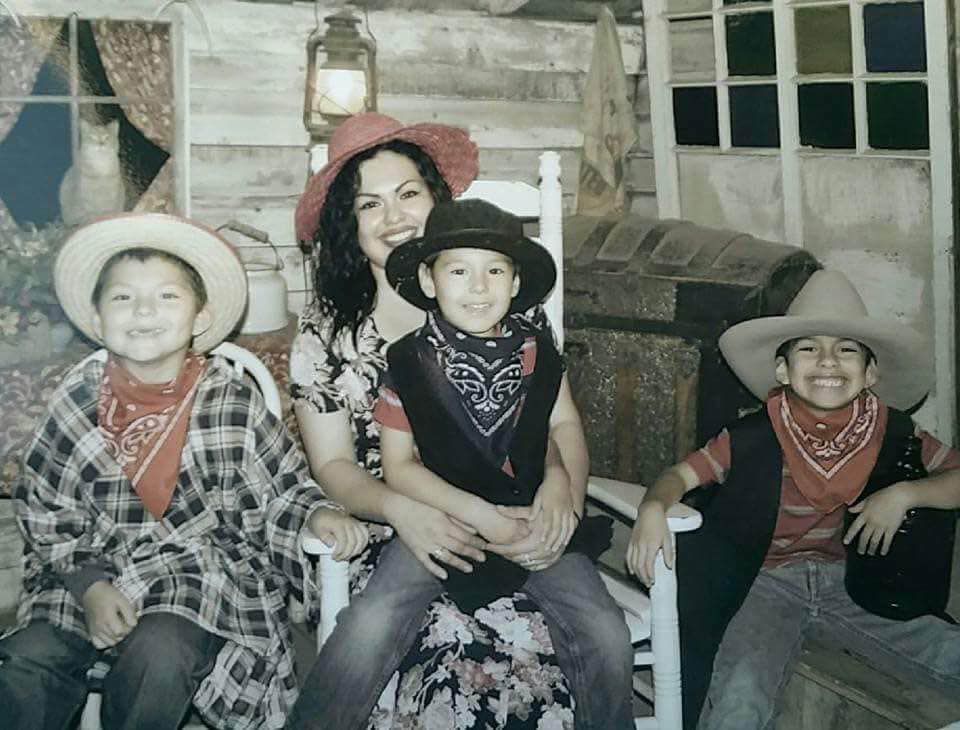 Maria Cristina Menjivar with sons, from left, Adrian, 8, Angel, 7, and Julian, 10. Cristina Menjivar, who was pregnant with her first daughter, “did anything and everything” for her boys, according to a GoFundMe page for the Schuyler family.

A pregnant mother and her three sons were killed in a three-vehicle wreck that occurred in thick fog Saturday near Fremont, according to authorities.

A family member identified the four who died as Maria Cristina Menjivar, 32, and sons Julian, 10, Adrian, 8, and Angel, 7. Menjivar was also about eight months pregnant with her first daughter, according to a GoFundMe page. The fund, which has a goal of $50,000, was set up to help with burial and other expenses for the Schuyler, Nebraska, family. More than $20,000 had been donated by Monday afternoon.

The crash occurred at the entrance to Westlake Mobile Home Park about a half-mile west of Fremont on U.S. Highway 30.

Investigators determined that a 2002 Ford Mustang driven by Jack Ford, 16, of Fremont was stopped on Highway 30 in the eastbound traffic lane waiting to turn left into the Westlake Mobile Home Park at 5:41 p.m. A 2002 Dodge Ram pickup truck driven by German R. Lopez Saenz, 33, crashed into the Mustang from behind.

The impact sent the pickup into the westbound traffic lane, where it collided with a 2001 Ford Taurus driven by Menjivar. She and her three sons were pronounced dead at the scene.

Glass said Monday it would be "quite some time" before the investigation into the collision will be completed and he can review reports to determine whether any laws were broken.

According to a post on social media seeking help with funeral expenses, Menjivar was expecting her first daughter next month. To make a donation, go to www.gofundme.com and search for “Cristina Menjivar.”

The post also said Menjivar is being remembered as a positive, loving and hardworking mom.

“She did anything and everything to make sure her boys had all they needed and was always there for them,” the post said. “Her boys were three sweet little boys ages 7, 8 and 10.”

The boys were in grades 2, 4 and 5 at Schuyler Elementary School, said Schuyler Superintendent Dan Hoesing. Five counselors, including retired guidance counselors, were sent to the school Monday to help students, teachers and staff deal with the boys' deaths, Hoesing said.

The school has 800 students, Hoesing said, and the district has more than 2,000 students, including preschoolers.

"Unfortunately," Hoesing said, "we've had several tragedies in our district over the years."

All three of the boys were in the after-school program, which is staffed by Schuyler Central High School students, Hoesing said. Counselors also will be available to the high schoolers who worked with the boys.

"I'm sure, over the next few days, we'll learn more about this family outside of school," he said. For now, he said, school officials are focused on "how do we deal with the issue and do a good job of managing this thing with some kind of sympathy and empathy."

Maria Cristina Menjivar, who was born in California and graduated in 2004 from Schuyler Central High School, worked at Henningsen Foods in David City as a safety coordinator. She is survived by her father, Carlos Alberto; mother, Rosa Flores, and stepfather, Jose Antonio Ortega; sister, Abigail Ortega; and brothers, Joseph Ortega and Carlos Menjivar.

Julian is survived by his father, Francisco Moreno Martinez, according to the family’s obituary. Adrian, Angel and their unborn sister, Luna, are survived by their father, Leobardo Saldana.

The joint family funeral service is being handled by Svoboda Funeral Home of Schuyler. The funeral Mass will be 10 a.m. Feb. 14 at St. Augustine’s Catholic Church in Schuyler.

Investigators said airbags deployed on the pickup and on the Taurus. Menjivar was not wearing a seat belt. All three children were in the back seat and two of them were wearing seat belts.

According to the crash report issued by Dodge County Sheriff Steve Hespen, alcohol is not believed to have been a factor in the wreck.

A search of Nebraska Department of Motor Vehicle records did not locate a driver’s license for Lopez Saenz.

Dodge County court records show that Lopez Saenz has been cited three times for driving without an operator’s license. He was fined $75 during each court appearance, the last time on Dec. 4, 2014.

The Sheriff’s Office was assisted at the scene by the Nebraska State Patrol, the Fremont Police Department, Fremont Fire and Rescue and the Fremont Rural Fire Department.

The State Patrol had warned drivers of heavy fog in the area.

Sorry folks, no real break from winter's cold in sight, but it won't be 'ridiculously cold'

If you were hoping that this weekend's warmth was a sign that winter had spent its fury last week, you're out of luck.

Jermaine Haynie, 33, was charged Thursday with theft by deception, a felony that carries a maximum of two years in prison.

The man was driving a smaller red pickup truck with mud on and around its wheel wells and side panels.

Thick fog covered much of eastern Nebraska and Iowa on Saturday evening, reducing visibility to near zero in some locations, the National Weather Service said.

A 64-year-old man died and two other people were injured as the result of a two-vehicle crash Wednesday on Nebraska Highway 92 in Merrick County.

A pregnant mother and her three-school age sons died in a three-vehicle crash just west of Fremont at dusk on Feb. 2.

Could this be T-Rex's relative?

World's most expensive face mask is being made with over 3,000 diamonds

World's most expensive face mask is being made with over 3,000 diamonds

Chinese city gets caught inside tornado

Chinese city gets caught inside tornado

Flowers are placed near U.S. Highway 30 west of Fremont, where a three-vehicle crash on Saturday killed four people. It will be “quite some time” before the investigation into the crash is complete.

Maria Cristina Menjivar with sons, from left, Adrian, 8, Angel, 7, and Julian, 10. Cristina Menjivar, who was pregnant with her first daughter, “did anything and everything” for her boys, according to a GoFundMe page for the Schuyler family.