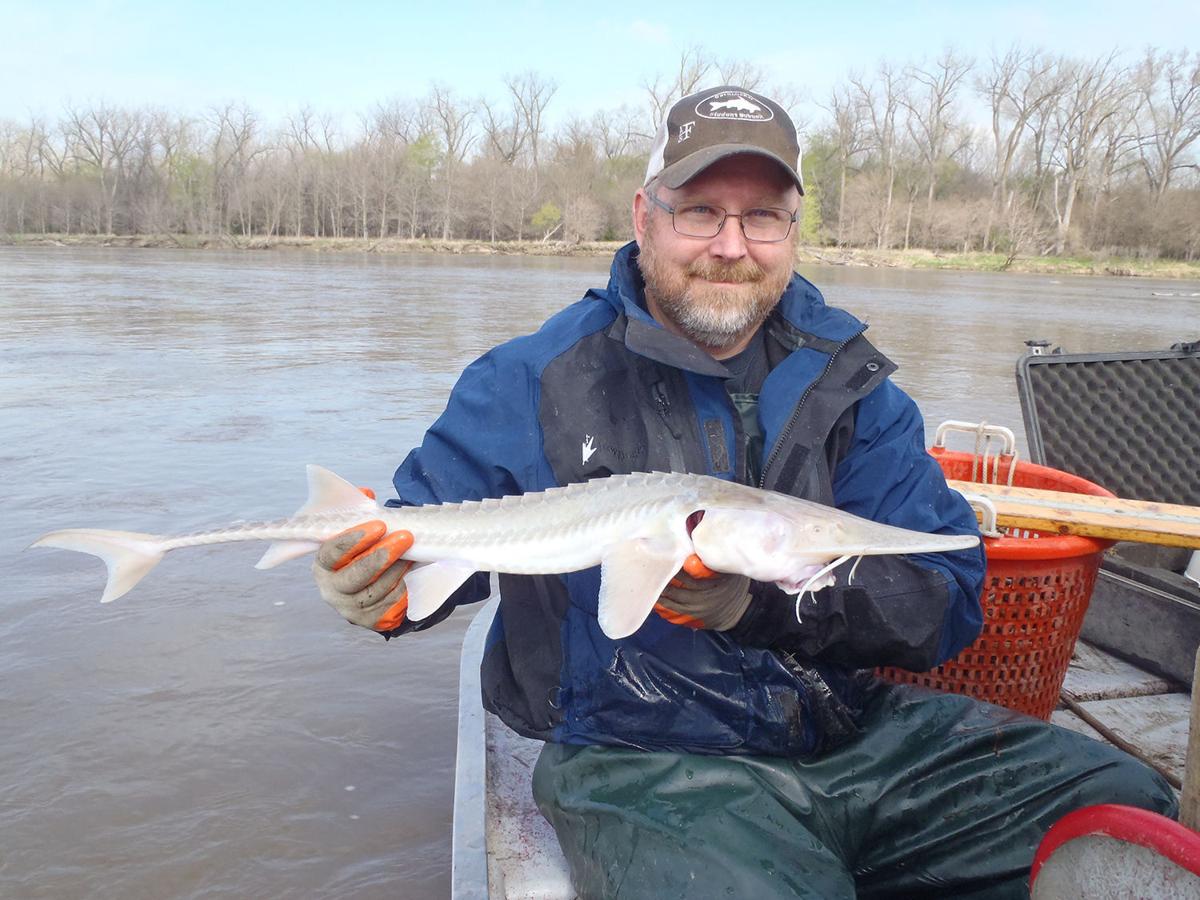 Mark Pegg, a UNL fisheries ecologist, helped author a report on the health of pallid sturgeon in the lower Missouri River.

This pallid sturgeon, pulled from the lower Missouri River in October 2012, shows a relatively plump, healthy fish, weighing in at 10.6 pounds. It is 42.1 inches long. This was one year after the flood of 2011. Scientists believe river conditions and the availability of food affects sturgeon health.

This pallid sturgeon was pulled from the Missouri River in April 2015 and is skinnier than it should be, owing to poor conditions in the river. This was four years after the 2011 flood. It is 42 inches long, and it weighed 7.8 pounds.

A new study of an endangered fish along the lower Missouri River paints a sobering picture of its future.

Pallid sturgeon are dying off at a much younger age than previously thought and are spawning a fraction of normal, according to the report this summer in Scientific Reports/Nature.

The study also confirms how inhospitable the reengineered lower Missouri River is to the pallid sturgeon’s health compared to the more naturally flowing portions of the upper river.

“This really affects how many fish we think are out there, and the number of times these fish would become reproductively ready,” said Kirk Steffensen, a fisheries biologist with Nebraska Game and Parks Commission who was one of the authors of the report.

For now, Steffensen said, it’s clear that maintaining the population will require stocking the river.

Protecting the fish from extinction is a politically, economically and emotionally charged issue given the competing interests along the river, notably farming and barge traffic.

Some farmers say protecting the pallid sturgeon will result in them losing land, while barge operators say the river needs to kept artificially narrower so that it will run deep enough to carry their loads.

Ettleman’s ability to farm his bottomland has been hindered by high water and floods. Recurring flooding, he said, has destroyed the ecosystem along the river.

“There are no pheasants or quail or rabbits along the river anymore because of this reoccurring flooding,” he said. “It’s tough to see any balance right now, I can tell you that.”

But scientists say the best way to address the lower river’s tendency to flood is to return some of the width that was eliminated to make it suitable for barges. More designated room for the river will reduce the frequency and height of flooding, they say, which will give farmers more certainty and produce an environment healthier for the pallid sturgeon.

“If we improve the river in terms of flooding, it would help the pallid sturgeon and farmers,” said Gerald Mestl, a fisheries biologist and the retired Missouri River program manager for the Nebraska Game and Parks Commission. “We think we’re on the same side.”

Mestl estimated that the river has been forced into about half the space it used to occupy. If the channel’s capacity was doubled by purchasing land from willing sellers, he said, flooding would be reduced by 90%.

And while the pallid sturgeon is the species protected by law, any improvements that help that fish will help the entire river ecosystem, Steffensen said.

As difficult as species conservation is, Steffensen said it’s worth trying.

“Pallid sturgeon serve as a good indicator species of the health of the river,” he said. “They were around for millions of years, and they were able to survive. Now all of a sudden, they’re an imperiled species.”

Since 2019’s catastrophic flooding, government officials have been meeting with various interests along the lower river to chart a path forward. How species protection will rank compared to other human interests remains to be seen. For now, though, federal funding of habitat restoration has largely been suspended.

Complicating the viability of the species is the already recognized near impossibility of pallid sturgeon embryos spawned in the wild surviving into adulthood.

Through DNA analysis, fish biologists know that the majority of adults they find in the river were raised in a hatchery before being released into the river as fingerlings. Only about 8% of all pallid sturgeon captured in the lower Missouri River were spawned there, Steffensen said.

For the purposes of this study, the upper river is the area near the confluence of the Missouri and Yellowstone Rivers, below Fort Peck Dam in northeast Montana. The lower Missouri River is that portion downstream of Gavins Point Dam to the river’s confluence with the Mississippi River (from north of Sioux City, Iowa, to St. Louis, Missouri).

The new research compared the health, fertility and life cycles of pallid sturgeon on the reconstructed lower Missouri River to the more naturally flowing upper Missouri River. (The upper Missouri, above the dams, doesn’t carry commercial barges so a narrowing and deepening of the river isn’t required.)

Compared to the upper Missouri, the study found that in the lower Missouri River:

The research was led by the University of Nebraska-Lincoln School of Natural Resources, assisted by the Nebraska Game and Parks Commission.

Mark Pegg, a UNL fisheries ecologist, and then-UNL post-graduate students Martin Hamel and Jonathan Spurgeon were the other authors. Pegg said he was prepared to see some difference in the numbers but was surprised by how much their health varied.

“I didn’t expect it to be that dramatic,” he said.

Steffensen said scientists thought pallid sturgeon lived to about 40 years in the lower Missouri. A lifespan half that long means that females have fewer years to reproduce. (That’s a problem because pallid sturgeon lay eggs only every couple of years.)

The lineage of the pallid sturgeon dates back some 70 million years, but as this study underscores, nothing in its past has equipped it to adapt to the changes humans have brought to the Missouri River.

During the last century, humans effectively straitjacketed the lower Missouri River by narrowing, deepening and shortening it so that it could serve as a watery highway for commercial boating. And except for the more naturally free flowing stretches, the upper river now is home to six massive dams — the largest reservoir system in North America.

The entire stretch of river from Sioux City to St. Louis has been channelized, with armoring added on the outside of bends of the river and in-stream barriers constructed on the insides of bends. If not for these restrictions, the river would follow multiple, shallower paths that braid together and split apart. (Levees were an add-on, built to reduce flooding.)

Largely gone in the lower Missouri are shallow pools and nutrient-rich side channels of varying depths. It was in these nurseries where larval pallid sturgeon took refuge and found the food needed to mature into fingerlings. And it’s also this type of habitat, which is more common on the upper river, that best nourishes adult pallid sturgeons.

The ecological value of a more naturally flowing river also has been borne out by annual fluctuations in the health of the pallid sturgeon that mirror river conditions on the lower Missouri.

During years of high water, when the river escapes its man-made confines and wanders through adjacent low-lying areas, the fish thrive, gaining weight, Steffensen said. During years in which the river remains within its constructed route, the fish are much thinner, he said.

Steffensen said high water years probably produce healthier fish because the river climbs out of its banks and creates pools and slower flowing areas on the floodplain, which is nutrient-rich with insects, minnows and other organisms.

And while pallid sturgeon are healthier, live longer and spawn more often on the upper Missouri River, that stretch of the river poses its own problem to the species’ survival. The reservoirs created by the dams apparently are fatal to pallid sturgeon embryos, Steffensen said.

That’s because the embryos float downstream for about two weeks as they mature, and over that period of time, scientists believe they float into reservoirs, sink to the bottom and die.

That means strategies to preserve the fish differ on the upper and lower river, Steffensen said. On the upper river, the focus is on finding a way to create sufficient distance for the embryos to drift. The solution to this is building bypass channels. On the lower river there’s plenty of drift distance, but not enough nursery habitat off to the side of the river. The extent to which future nursery habitat receives federal funding remains to be seen.Eagles along the Missouri River

Photos: Eagles along the Missouri River

Majestic birds can be seen near most open water

Birds of every type

Birds of all varieties

Swooping in for the kill

A couple of eagles

Dinner in its sights

Union Pacific and BNSF say federal protections of endangered species, in this case the spawning of the pallid sturgeon, prevented them from removing the roads as soon as repairs were complete. The U.S. Army Corps of Engineers says there's more to the story.

Omaha State Sen. Mike McDonnell says he's not trying to revive plans to replace croplands and historic towns with a 25-mile-long lake between Lincoln and Omaha.

'It's peaceful': Reopening of N.P. Dodge Park lures boaters back to Missouri River

Neither Haworth nor N.P. Dodge Park is fully open, but providing people access to the Missouri River is a major step forward in recreational recovery from the flood of 2019.

Deer are more active this time of the fall. Crops are being harvested and deer breeding season is in full swing. Bucks are bolder, less wary and more susceptible to collisions with vehicles.

With the shift from overly wet weather to drought, the reservoirs on the upper Missouri River are expected to drop below their minimum, so-called flood control level by next spring.

Nebraska man dies after losing control of pickup on Highway 92

A man from rural Mitchell, Nebraska, died after losing control of his pickup on Nebraska Highway 92 on the northwest side of Scottsbluff.

A new agreement paves the way for the largest dam demolition in U.S. history, a project that promises to reopen hundreds of miles of waterway along the Oregon-California border to salmon that are critical to tribes but have dwindled to almost nothing.

Mark Pegg, a UNL fisheries ecologist, helped author a report on the health of pallid sturgeon in the lower Missouri River. 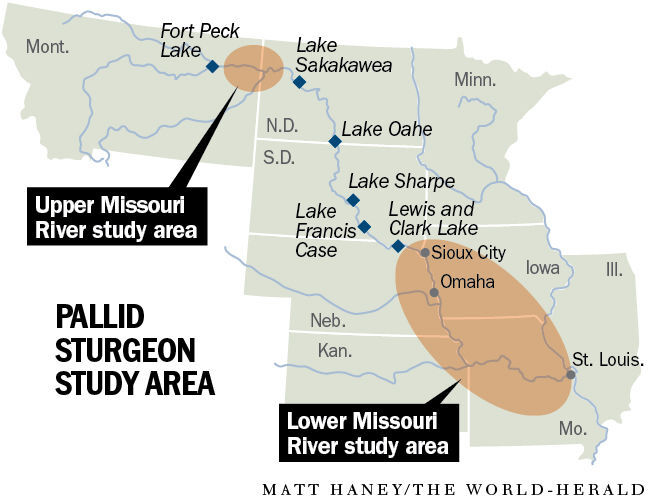 This pallid sturgeon, pulled from the lower Missouri River in October 2012, shows a relatively plump, healthy fish, weighing in at 10.6 pounds. It is 42.1 inches long. This was one year after the flood of 2011. Scientists believe river conditions and the availability of food affects sturgeon health.

This pallid sturgeon was pulled from the Missouri River in April 2015 and is skinnier than it should be, owing to poor conditions in the river. This was four years after the 2011 flood. It is 42 inches long, and it weighed 7.8 pounds.