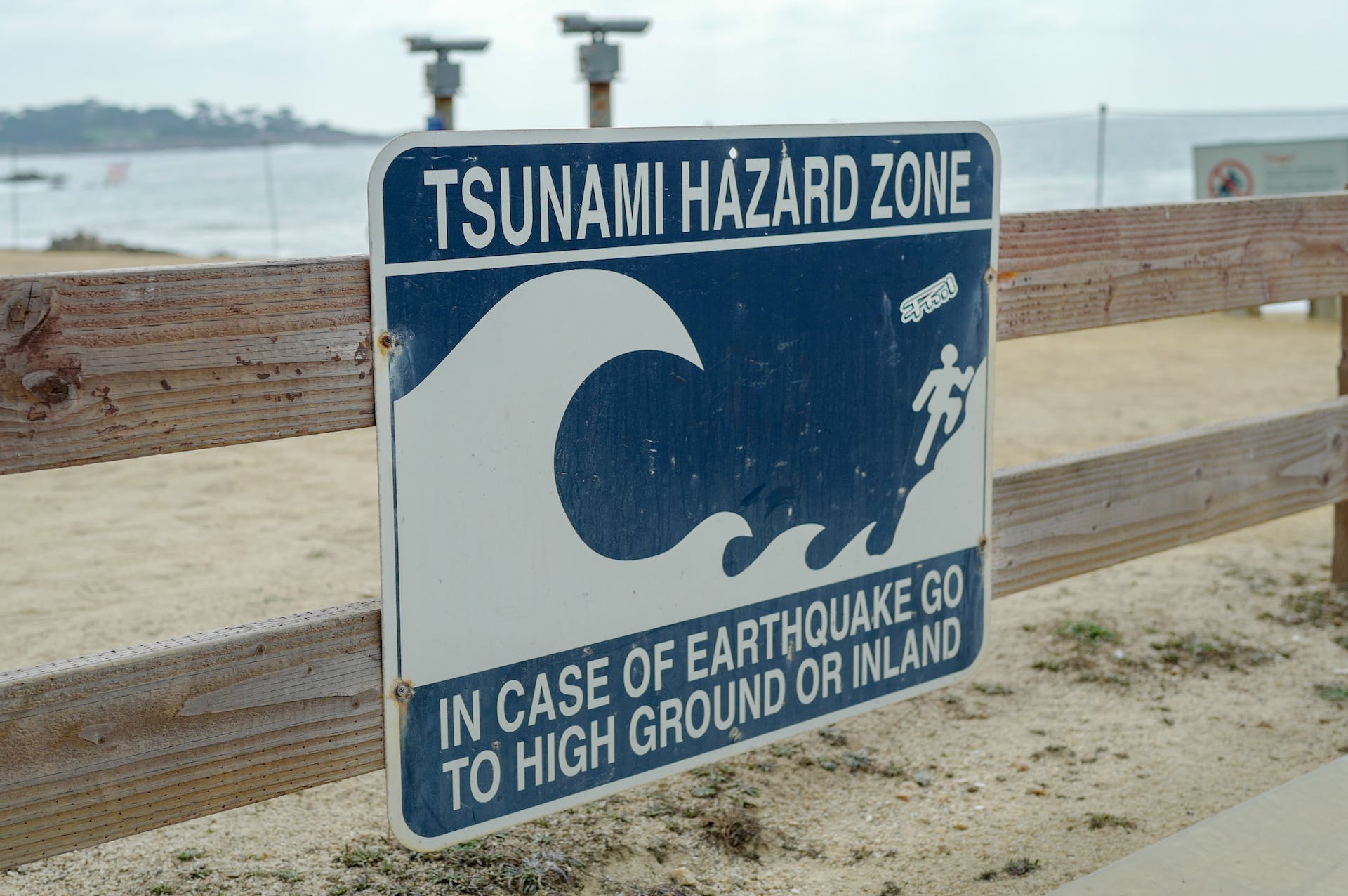 On Jan. 15, 2022, coastal areas across California were placed under a tsunami warning. Gado via Getty Images

On Jan. 15, 2022, the Hunga Tonga-Hunga Ha’apai volcano in Tonga erupted, sending a tsunami racing across the Pacific Ocean in all directions.

As word of the eruption spread, government agencies on surrounding islands and in places as far away as New Zealand, Japan and even the U.S. West Coast issued tsunami warnings. Only about 12 hours after the initial eruption, tsunami waves a few feet tall hit California shorelines – more than 5,000 miles away from the eruption.

I’m a physical oceanographer who studies waves and turbulent mixing in the ocean. Tsunamis are one of my favorite topics to teach my students because the physics of how they move through oceans is so simple and elegant.

Waves that are a few feet tall hitting a beach in California might not sound like the destructive waves the term calls to mind, nor what you see in footage of tragic tsunamis from the past. But tsunamis are not normal waves, no matter the size. So how are tsunamis different from other ocean waves? What generates them? How do they travel so fast? And why are they so destructive?

When the Hunga Tonga-Hunga Ha'apai volcano erupted, it launched ash into the atmosphere, created a powerful shock wave and displaced a huge amount of water, generating a tsunami that raced across the ocean. Japan Meteorological Agency via WikimediaCommons, CC BY

Most waves are generated by wind as it blows over the ocean’s surface, transferring energy to and displacing the water. This process creates the waves you see at the beach every day.

Tsunamis are created by an entirely different mechanism. When an underwater earthquake, volcanic eruption or landslide displaces a large amount of water, that energy has to go somewhere – so it generates a series of waves. Unlike wind-driven waves where the energy is confined to the upper layer of the ocean, the energy in a series of tsunami waves extends throughout the entire depth of the ocean. Additionally, a lot more water is displaced than in a wind-driven wave.

Earthquakes can easily move huge amounts of water and cause dangerous tsunamis. Same with large undersea landslides. In the case of the Tonga tsunami, the massive explosion of the volcano displaced the water. Some scientists are speculating that the eruption also caused an undersea landslide that contributed to the large amount of displaced water. Future research will help confirm whether this is true or not.

No matter the cause of a tsunami, after the water is displaced, waves propagate outward in all directions – similarly to when a stone is thrown into a serene pond.

Because the energy in tsunami waves reaches all the way to the bottom of the ocean, the depth of the sea floor is the primary factor that determines how fast they move. Calculating the speed of a tsunami is actually quite simple. You just multiply the depth of the ocean – 13,000 feet (4,000 meters) on average – by gravity and take the square root. Doing this, you get an average speed of about 440 miles per hour (700 kilometers per hour). This is much faster than the speed of typical waves, which can range from about 10 to 30 mph (15 to 50 kph).

This equation is what oceanographers use to estimate when a tsunami will reach faraway shores. The tsunami on Jan. 15 hit Santa Cruz, California, 12 hours and 12 minutes after the initial eruption in Tonga. Santa Cruz is 5,280 miles (8,528 kilometers) from Tonga, which means that the tsunami traveled at 433 mph (697 kph) – nearly identical to the speed estimate calculated using the ocean’s average depth. 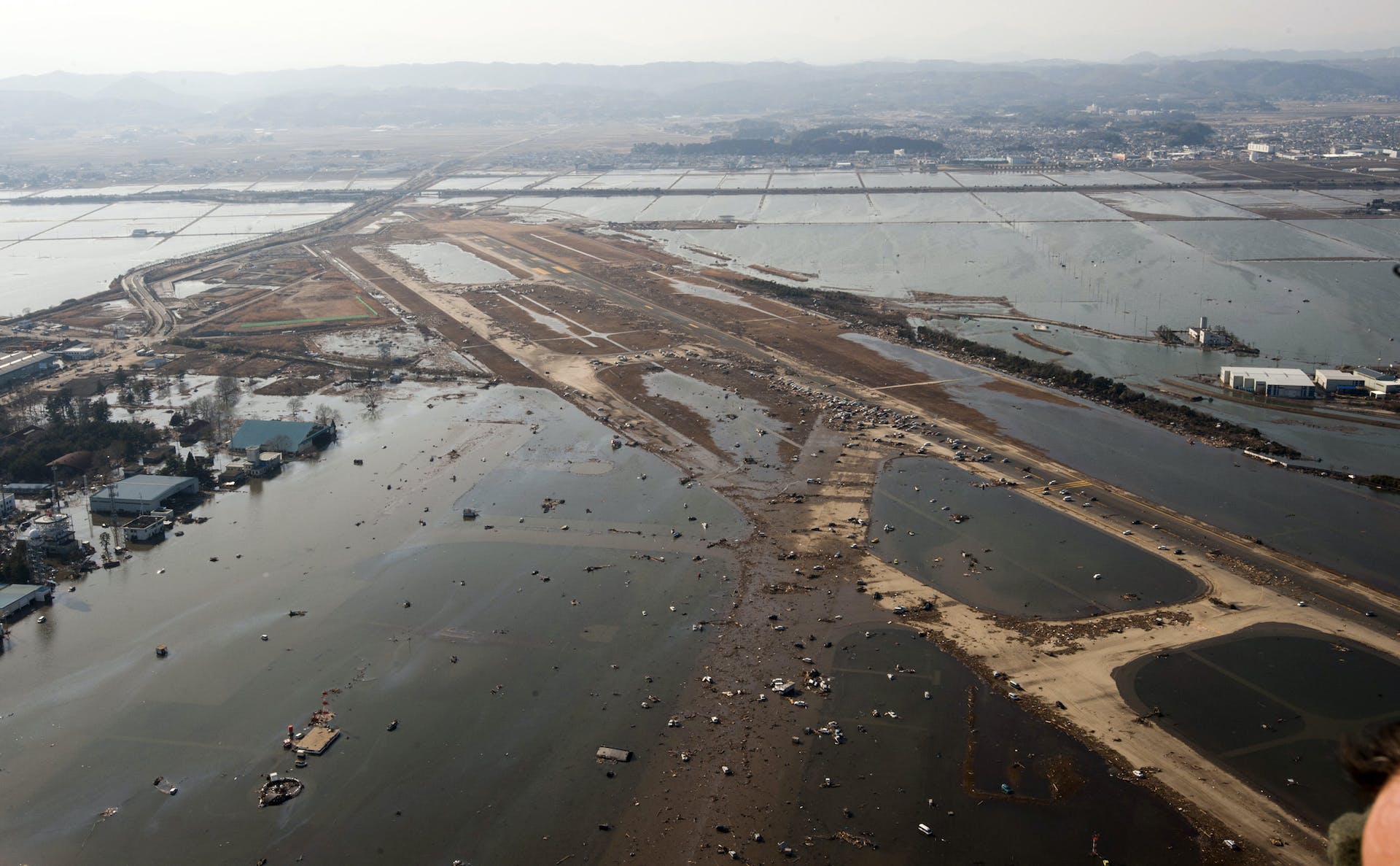 Many tsunamis, including the 2011 Tsunami in Japan, move inland and can flood areas far from the coast. U.S. Air Force photo/Staff Sgt. Samuel Morse via WikimediaCommons

Tsunamis are rare compared to ubiquitous wind-driven waves, but they are often much more destructive. The 2004 Indian Ocean tsunami killed 225,000 people. More than 20,000 lost their lives in the 2011 Japan tsunami.

What makes tsunamis so much more destructive than normal waves?

As waves approach shore, they get pushed upward by the rising seafloor. Régis Lachaume via Wikimedia Commons, CC BY-SA

In the open ocean, tsunami waves can be small and may even be undetectable by a boat at the surface. But as the tsunami approaches land, the ocean gets progressively shallower and all the wave energy that extended thousands of feet to the bottom of the deep ocean gets compressed. The displaced water needs to go somewhere. The only place to go is up, so the waves get taller and taller as they approach shore.

When tsunamis get to shore, they often do not crest and break like a typical ocean wave. Instead, they are more like a large wall of water that can inundate land near the coast. It is as if sea level were to suddenly rise by a few feet or more. This can cause flooding and very strong currents that can easily sweep people, cars and buildings away.

Luckily, tsunamis are rare and not nearly as much of a surprise as they once were. There is now an extensive array of bottom pressure sensors, called DART buoys, that can sense a tsunami wave and allow government agencies to send warnings prior to the arrival of the tsunami.

If you live near a coast – especially on the Pacific Ocean where the vast majority of tsunamis occur – be sure to know your tsunami escape route for getting to higher ground, and listen to tsunami warnings if you receive one.

The eruption of the Hunga Tonga-Hunga Ha’apai volcano severed the main communication cable that connects the people of Tonga to the rest of the world. While the science of tsunamis can be fascinating, these are serious natural disasters. Only a few deaths have been reported so far from Tonga, but many people are missing and the true extent of the damage from the tsunami is still unknown.

Sally Warner has received funding from the National Science Foundation and the Office of Naval Research.

Get fascinating science, health and technology news. Sign up for The Conversation’s weekly science newsletter.

Why the Tonga volcano eruption was so big and what's next

What does an octopus eat? For a creature with a brain in each arm, whatever's within reach

With nine brains, blue blood and a talent for camouflage, the octopus is one of the most fascinating creatures in the sea.

When police were called to deal with a teenager in the throes of a mental health crisis, everything went wrong. Cedric “C.J.” Lofton had had a troubled life, and his final hours were horrendous — he was dragged from the porch of his foster home, taken to a juvenile facility instead of a mental hospital, and shackled face down until he lost consciousness. No one has been charged in C.J.'s death; the prosecutor in the case raised questions about nearly everyone involved in C.J.’s care, from the juvenile workers to the foster care system, and said this death never should have happened.

Scuba divers at Lake Tahoe are sorting through their haul after an unprecedented, yearlong effort to remove litter from the alpine lake's entire 72 miles of shoreline atop the Sierra Nevada. They found no trace of a mythical sea monster and no sign of mobsters in cement shoes or long-lost treasure chests. But their hope is the 25,000 pounds of junk they gathered will prove much more valuable. Since last May, they've meticulously sorted and logged the types and GPS locations of the waste. It’s part of a first-of-its-kind effort to learn more about the potential harm caused by plastics and other pollutants in the waters on the California-Nevada line.

What is the Flower Moon? A guide to full moon nicknames

Why are full moons sometimes called by specific names? It turns out it's not some new social media trend. Here's a guide.

Moon goes blood red this weekend: 'Eclipse for the Americas'

A total lunar eclipse will grace the night skies this weekend, providing longer than usual thrills for stargazers across North and South America. The celestial action unfolds Sunday night into early Monday morning. The moon will be bathed in the reflected red and orange hues of Earth's sunsets and sunrises for about 1 1/2 hours. It will be one of the longest totalities of the decade and the first so-called blood moon in a year. Observers in the eastern half of North America, and all of Central and South America, will have prime seats for the whole show, weather permitting.

Two University of Michigan researchers are putting the “pee” in peony. Rather, they’re putting pee on peonies. Environmental engineering professors Nancy Love and Krista Wigginton are regular visitors to the Ann Arbor school’s Nichols Arboretum, where they've been applying urine-based fertilizer to the heirloom peony beds ahead of the flowers’ annual spring bloom. It’s all part of an effort to educate the public about their research showing that applying fertilizer derived from nutrient-rich urine could have environmental and economic benefits. Love is co-author of a study published in the Environmental Science & Technology journal that found urine diversion and recycling led to significant reductions in greenhouse gas emissions and energy.

For the first time, scientists have grown plants in soil from the moon collected by NASA's Apollo astronauts.

US deaths from COVID hit 1 million, less than 2 1/2 years in

The U.S. death toll from COVID-19 has hit 1 million, less than 2 1/2 years into the outbreak. That is a once-unimaginable figure that only hints at the multitudes of loved ones and friends staggered by grief and frustration. The figure is based on data kept by the Centers for Disease Control and Prevention. The number of dead is equivalent to a 9/11 attack every day for 336 days. It is roughly equal to the number of Americans who died in the Civil War and World War II combined. It’s as if Boston and Pittsburgh were wiped out. Some of those left behind say they cannot return to normal. They replay their loved ones’ voicemail messages. Or watch old videos to see them dance. When other people say they are done with the virus, they bristle with anger or ache in silence.

Climate change will result in thousands of new viruses spread among animal species by 2070 — and it's likely to increase the risk of emerging infectious diseases jumping from animals to humans, especially in Africa and Asia, according to a new study. Those continents have been hotspots for deadly diseases spread from humans to animals or vice versa over the last several decades. These include the flu, HIV, Ebola and coronavirus. Researchers examined how mammal species might migrate and share viruses across species over the next 50 years if the world warms by 2 degrees Celsius (3.6 degrees Fahrenheit). They found that cross-species virus spread will happen over 4,000 times among mammals.

A total lunar eclipse provided a spectacular celestial show as it unfolded Sunday night into early Monday in the Americas.