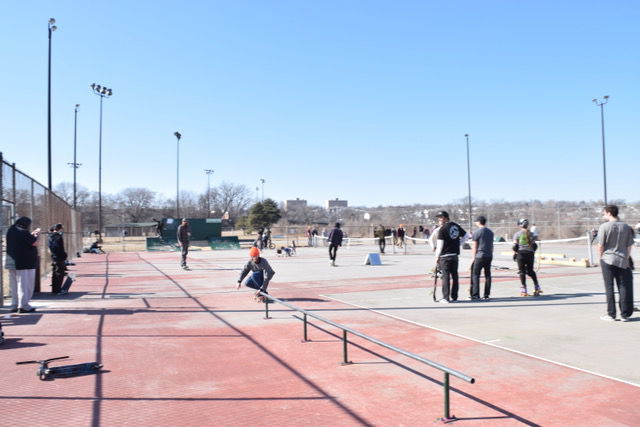 People gather at Lynch Park on Saturday to support local skaters who are urging the city to not take down the skateboard ramps there. 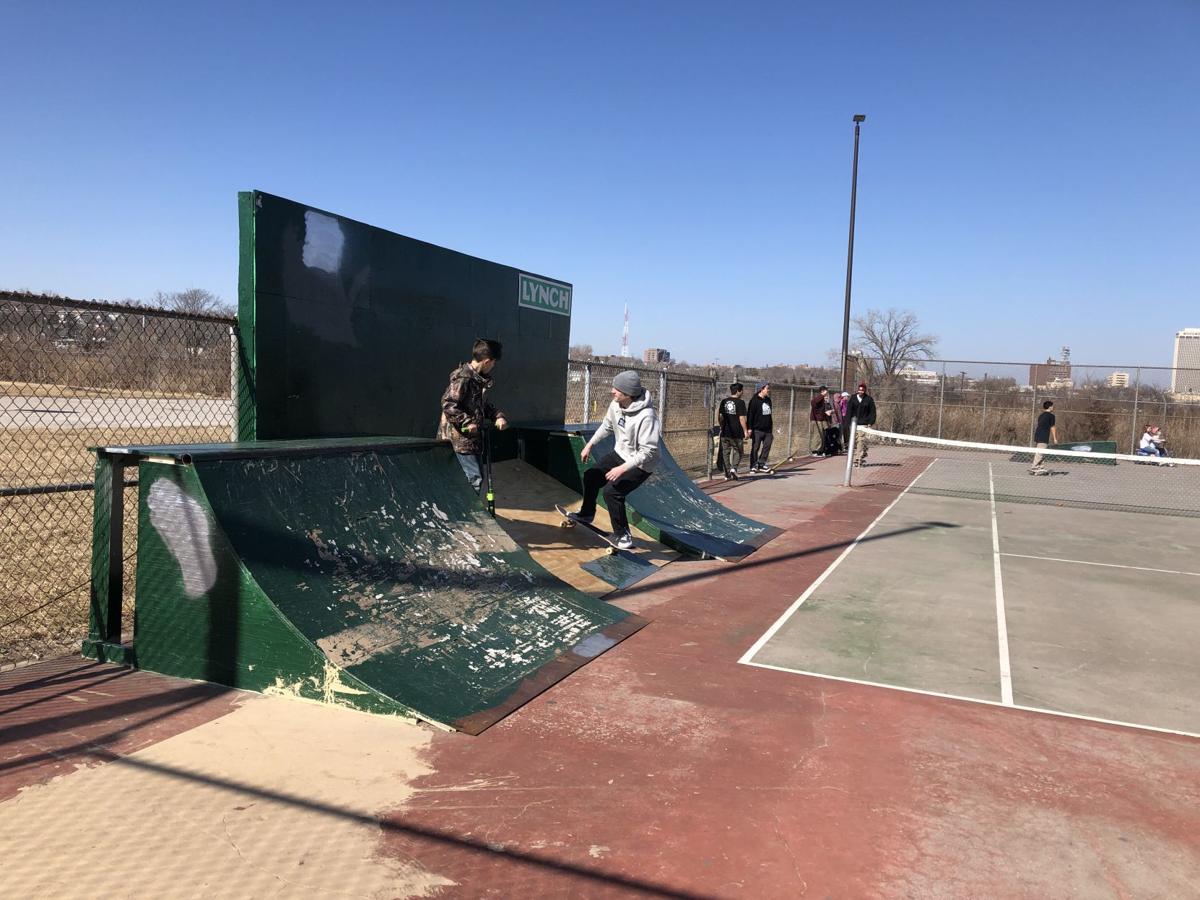 People skate on the ramps in Lynch Park in South Omaha last week. They were removed Monday. 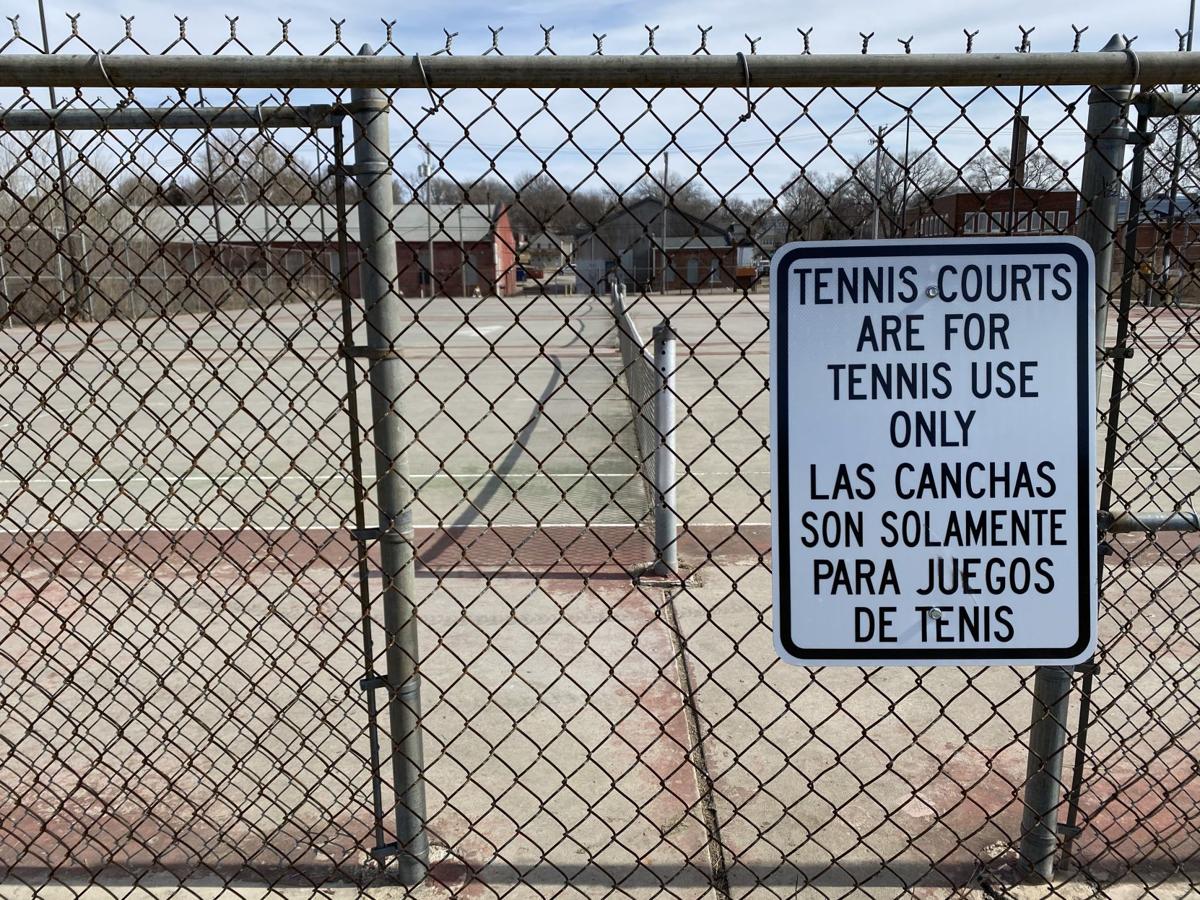 A sign at Lynch Park in South Omaha warns that the tennis courts are for tennis only. The skateboard ramps had been drilled into the courts without city approval. 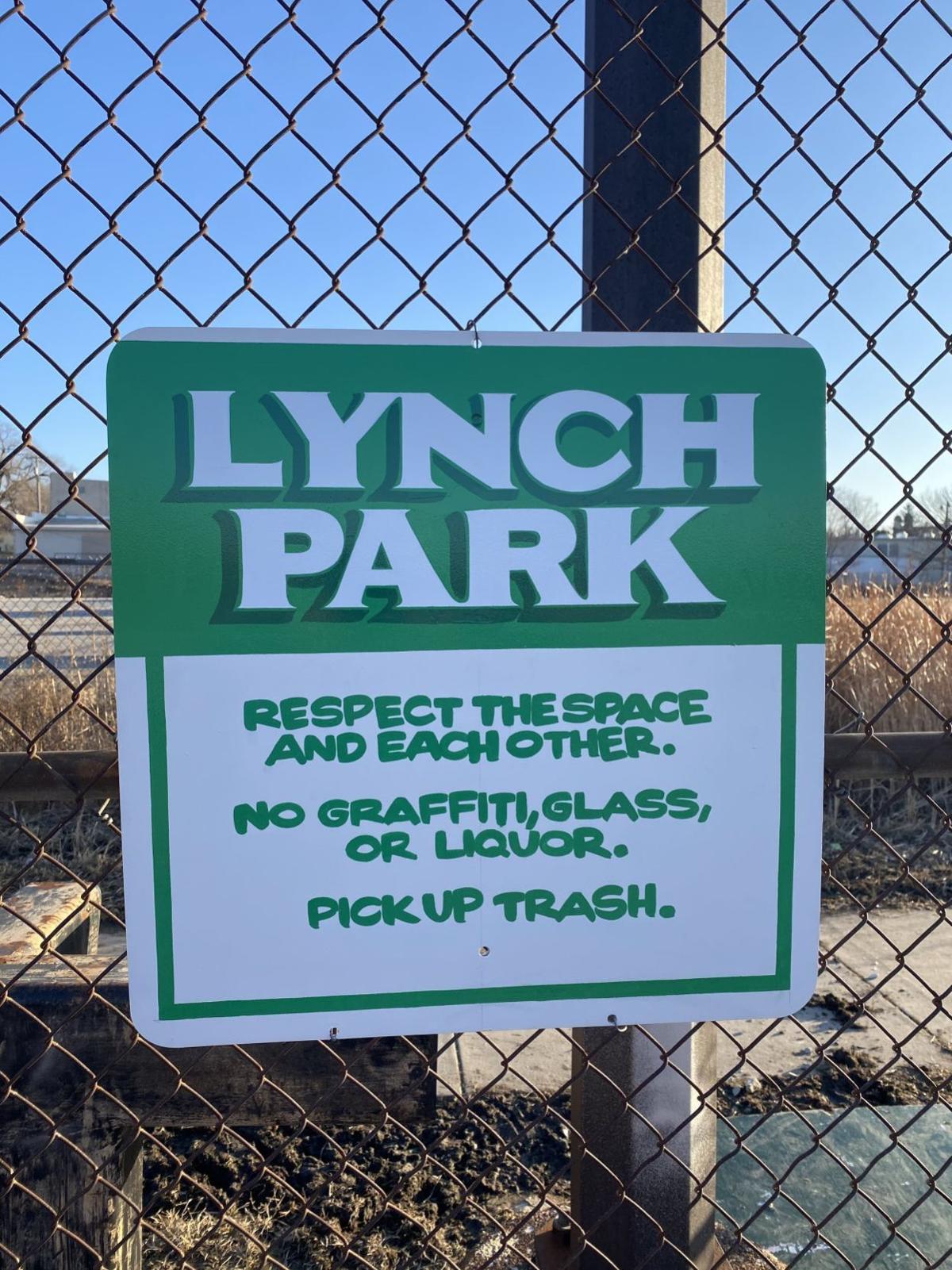 A sign put up by the skateboarders at the park, a South Omaha gathering spot.

Things move fast in the skateboarding world. Teenagers in South Omaha can tell you that.

On Monday morning, those young people awoke to find that the City of Omaha had removed homemade skate ramps from Lynch Park, prompting an outcry from skateboarders, community members and legendary skateboarder Tony Hawk.

By Tuesday afternoon, Mayor Jean Stothert made a commitment to them: The city will explore options for a permanent skate park in South Omaha. In the meantime, the city will install temporary ramps in the park at 20th and Dorcas Streets so that the teens can get back to practicing their kickflips.

Stothert said the city always is willing to work with people to address community needs. But the city had not been approached about a skate park in South Omaha until Tuesday morning, she said, when representatives of the Nebraska Skate Parks Council met with city leaders.

“If we would have known of the need and the want of a skate park in South Omaha, we certainly, the Parks Department, would have been more than happy to work with them,” Stothert said.

The temporary equipment at Lynch Park could be installed within a month or so, Stothert said at a press conference in her office. The exact timeline will depend on what equipment the skaters want and whether the city has to complete any additional work at the site. City costs would be minimal, Parks and Recreation Director Brook Bench said.

The city also will evaluate sites in South Omaha for a permanent skate park, which may or may not end up in Lynch Park. The timeline on that will depend in part on where the park is built.

Brenton Gomez, a member of the Nebraska Skate Parks Council who met with the city, said he’s happy that the mayor saw the need for a skate park in South Omaha. On Tuesday afternoon, he hadn’t yet spoken with many of the teenagers who frequent the park, but he knew what he’d say to them.

The city removed the original ramps because the skateboarders, a group of teenagers and adults, had installed them on tennis courts at Lynch Park without city approval. Officials have said the ramps were dangerous, did not meet city standards and would have posed a liability had someone gotten hurt on them. The group had drilled some of them into the tennis courts.

After learning of the city’s plans to remove the equipment, the skateboarders gathered at the park Saturday to ramp up support.

The temporary equipment at the park will be approved and installed by the city, Bench said.

Lynch Park was donated to the city years ago, Stothert said. The city had planned to redevelop it until officials discovered contaminated soil, which delayed the process. The cleanup effort was completed recently.

The city now plans to move forward with a $5 million master plan to revitalize the park, adding a splash pad, walking trails, new playground equipment and sports fields. The plan is in the early stages and the city is working to raise private money to pay for much of it.

Planners will consider whether a permanent skate park can be configured into the Lynch Park plan. If not, the city will consider other sites.

The new permanent skate park would differ from the ones at Roberts Park and Seymour Smith Park, both of which have large in-ground bowls and other ramps that cost hundreds of thousands of dollars, Bench said.

The new spot would feature smaller equipment, which is what the skaters want, he said.

But keeping skating activities at Lynch Park is a priority for the skateboarders, Gomez said, many of whom live near 20th Street. The group had come to use the park as a place to gather, socialize and skate.

The park has experienced some vandalism and other problems, but Gomez and others have said much of it was not caused by the skateboarders. The group made and installed their own signs at the park telling people to be respectful and avoid littering.

Bench, Stothert and other city leaders will continue meeting with the skateboarders to work out the details of this new partnership. There are sure to be snags along the way.

But for now, Stothert said, “I think that we formed a good partnership with them today and we’re going to move forward.”

Reece covers Sarpy County for The World-Herald. He's a born-and-raised Nebraskan and UNL grad who spent time in Oklahoma and Virginia before returning home. Follow him on Twitter @reecereports. Phone: 402-444-1127

Omaha Parks and Recreation Director Brook Bench said the ramps were dangerous and did not meet city code. But advocates and the skateboarders themselves say the city missed the larger point: The park had become an important South Omaha gathering place that the teenagers felt responsible for.

City of Omaha Parks Director Brook Bench described the ramps as homemade and said that whoever installed them bolted them to a tennis court at the park, damaging the court in the process. The ramps are dangerous, not up to code and are a liability for the city, Bench said.

Most levee breaches closed along Missouri River in Nebraska and Iowa

Closing the breach along one levee near Hamburg provides protection to that city, its residents and businesses and to area farmers.

The ice cream from Coneflower Creamery has lots of fans, including a kid from Louisiana.

The Department of Defense lab at Offutt Air Force Base that identifies soldiers, sailors, airmen and Marines from past wars will move to a new home, possibly in Bellevue. Rep. Jeff Fortenberry and a bipartisan Congressional delegation toured the lab on Tuesday.

Jobs, public safety, an overhaul of streets: Highlights of Stothert's State of the City address

"This job is about creating fun," Brook Bench said in a statement. "I am so grateful to Mayor Stothert for the opportunity to create new and better public spaces."

The Mid-Atlantic can't catch a break from flood threat

The Mid-Atlantic can't catch a break from flood threat

People gather at Lynch Park on Saturday to support local skaters who are urging the city to not take down the skateboard ramps there.

People skate on the ramps in Lynch Park in South Omaha last week. They were removed Monday. 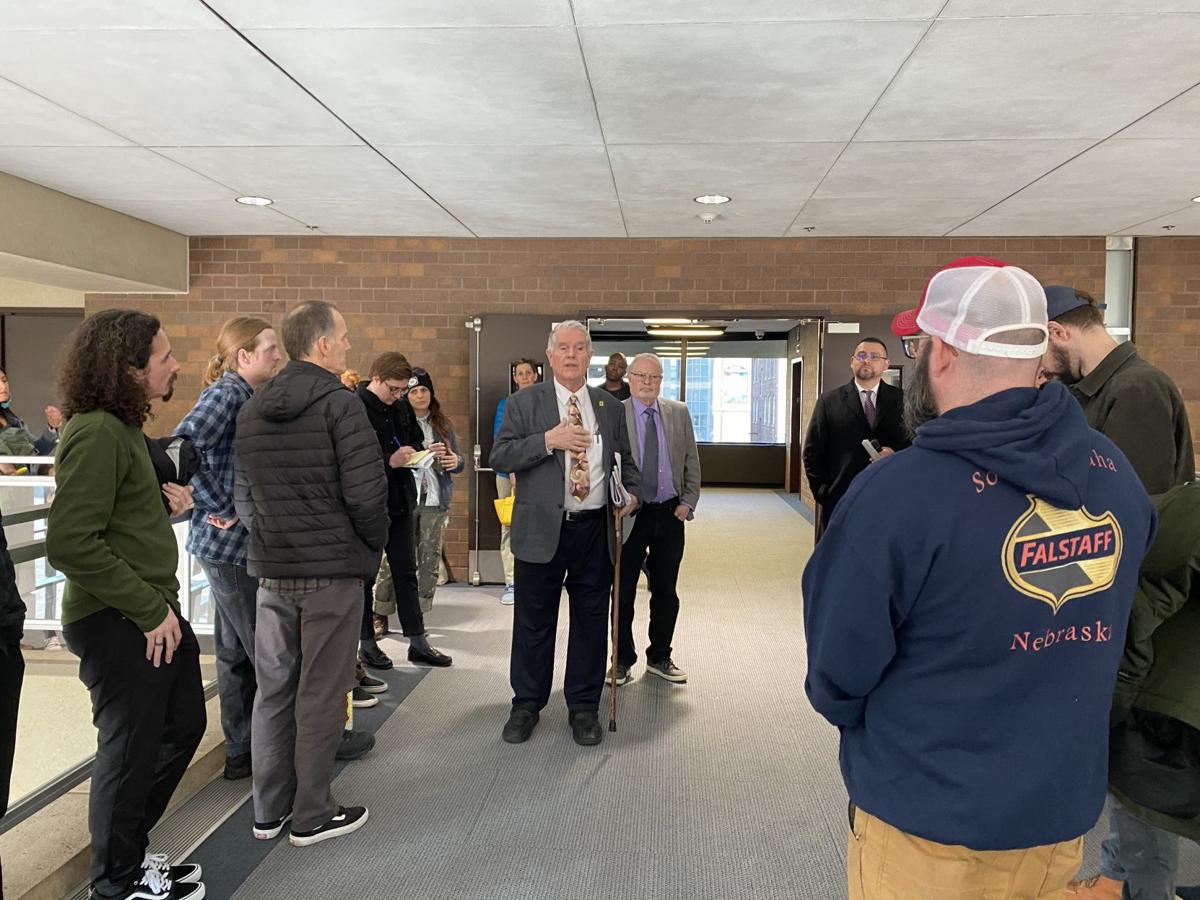 Douglas County Board member Mike Boyle addressed the skateboarders who were gathered at Omaha City Hall on Tuesday. Boyle said he supported their cause. He gave out his phone number and said he would work to help them. "A skateboard park really belongs at that park," Boyle said.

A sign at Lynch Park in South Omaha warns that the tennis courts are for tennis only. The skateboard ramps had been drilled into the courts without city approval.

A sign put up by the skateboarders at the park, a South Omaha gathering spot.