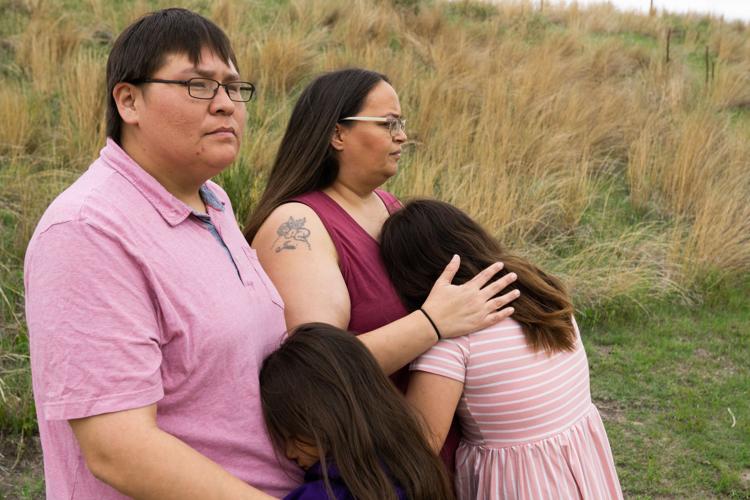 Norma LeRoy, 36, left, and Alice Johnson, 42, hold their daughters, ages 7 and 12, in Valentine City Park. LeRoy and Johnson filed a lawsuit against Cody-Kilgore Unified Schools after the girls’ hair was cut at the school in 2020. 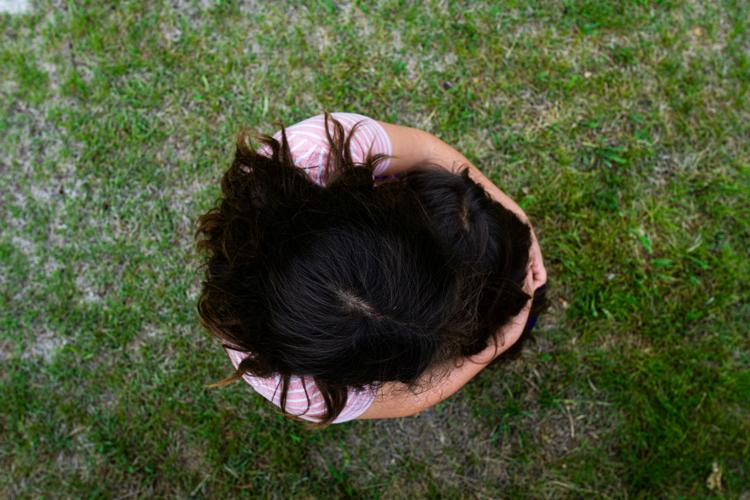 LeRoy and Johnson’s two youngest daughters hug. The Flatwater Free Press isn’t identifying the children or the school secretary who snipped their hair.

It’s early summer, and a Lakota woman stares into the trees, deep past the leaves and their shadows, her dark eyes misting up.

Norma LeRoy tries to understand why a school secretary cut her two little girls’ hair without her consent in the spring of 2020. The secretary was checking for lice, LeRoy was told — lice the mother said they never found.

LeRoy feels like few in this remote region of Cherry County, Nebraska, understand what they took. It’s why the 36-year-old Rosebud Sioux has to turn away from her kids, toward the trees, to shield them from her tears.

To her people, hair is sacred. Cutting it outside Lakota tradition carries consequences.

“Happiness, the goodness, the wellness of life, that takes all that away,” LeRoy said. “And so that’s the reason why we, as Native Americans, look at our hair strongly. Because it comes from the spirit world, and it was given to us.”

In Kilgore, population 79, less than 4 miles from South Dakota’s Rosebud reservation, hair cutting dredges up dark history. Stories of boarding schools where they sheared the jet black hair of Natives to make them look more like White people. Like those boarding school kids, LeRoy and her wife, Alice Johnson, say their little girls — ages 12 and 7 — also lost something. And immediately before and after the hair cutting, three of their grandmothers died.

“You don’t get lice if you have clean hair,” LeRoy said the secretary told her.

Other residents say the secretary’s good heart shouldn’t be ignored.

George Johnson, a retired rancher in Cody, 15 miles from Kilgore, served on the school board decades ago when it hired the secretary.

Without a principal, the secretary led the school, Johnson said, caring for his kids and many others. She advocated for children whose families couldn’t afford backpacks, coats or boots. Occasionally, the school has trimmed hair to stop the spread of lice, Johnson said. While he doesn’t know what happened in this case, Johnson said whatever happened, there was a reason.

“(She) did not do this out of animosity, punishment or anything else,” Johnson said. “She did it to help the children and keep the school safe. She’s not that type of person, I guarantee you.”

On May 17, the two mothers filed a lawsuit in federal court in Lincoln against the Cody-Kilgore Unified Schools district. The mothers allege their First Amendment rights were violated.

On July 15, the school and its attorney filed a motion to dismiss the case. School officials were unaware hair cutting was culturally insensitive, the motion reads, and the school’s former superintendent agreed not to cut the children’s hair in the future.

That did little to appease LeRoy and Johnson, who said the school violated their family’s culture in the same manner that Native culture has long been violated.

To understand the importance of hair to the Lakota, you need to know about the star woman.

Long ago, the story goes, a woman sat in the Big Dipper. Lonely, she grew her hair long enough to reach Earth. When she got here, she cut it.

“She cut it because she needed to come down here to build a life,” LeRoy said. “And for her to build that life, she used her hair. And so this is why we say that there are strict restrictions on women with long hair. Because their spirit lives within their hair. And once you cut that, part of their spirit’s gone.”

LeRoy grew up on these stories. She learned the Lakota language, ceremonies and traditions from her grandmother on the Rosebud reservation, where she lived most of her life.

LeRoy and Johnson met on Facebook in 2015 and they married a year later. Each had daughters from previous marriages and after marrying had one more. They are raising their four children with Lakota traditions.

But they are also raising them in a small, mostly White, Nebraska town — which wasn’t a problem until March 2, 2020.

“I was like, ‘Wait, who cut your hair?’ ” Johnson said when her 10-year-old daughter told her about the incident.

The girls told their mother the school secretary did it. When they called the superintendent, he said it was a head lice check. The school’s student handbook doesn’t outline how lice checks are performed.

In its motion to dismiss, the school district says while hair cutting is not written policy, “... the School District would sometimes cut a single strand of hair that contained the louse and tape it to a piece of paper to show the family.” The school district said it made steps to remedy the situation, agreeing on March 13 not to cut the children’s hair again. It returned one strand to the family, to burn in accordance with Lakota beliefs.

After the hair cutting, the two mothers drove to the Rosebud reservation. They went to see Waycee His Holy Horse, a spiritual leader, reservation police officer and LeRoy’s cousin, who performed rituals to protect the children’s spirits.

“(I felt) hurt, betrayal, anger and confusion,” said Lila Kills in Sight, the spiritual leader’s mother, who bathed the children with a sponge during the rituals. “We’re in a new era, and I just thought everyone knew about Native people and how we do things.

‘Kill the Indian, save the man’

As the story circulated on social media, raw emotions surfaced.

“Having the seventh, eighth, 10th generation having to go through it again ... I mean, it’s just a big eye opener because it’s being relived,” LeRoy said.

On March 3, 1819, the United States signed the Civilization Fund Act. That ushered in an era when boarding schools nationwide, including in Nebraska, separated Native children from their families.

“... All the Indian there is in the race should be dead. Kill the Indian in him, and save the man,” Capt. Richard H. Pratt, who founded the Carlisle Indian Industrial School, famously said in 1892.

In 1884, Christian missionaries came to South Dakota’s Yankton Reservation and took 8-year-old Zitkála-Šá from her mother.

“I remember being dragged out, though I resisted by kicking and scratching wildly,” Zitkála-Šá wrote in 1900 of her hair cutting. “In spite of myself, I was carried downstairs and tied fast in a chair. I cried aloud, shaking my head all the while until I felt the cold blades of the scissors against my neck, and heard them gnaw off one of my thick braids. Then I lost my spirit ... now I was only one of many little animals driven by a herder.”

‘We can speak up’

On March 9 this year, Johnson, LeRoy and a procession of grandmothers drove to the Cody-Kilgore school board meeting to tell those stories. Board members listened as the women read a letter and asked for cultural sensitivity training, said the mothers. When they finished, Adam Naslund, school board president, thanked them for sharing, according to meeting minutes.

The mothers and the ACLU said the school has since declined to implement cultural sensitivity training. In its motion to dismiss, the school district says it never discriminated, took quick action to prevent future hair cuttings and argued no further training is needed.

As for the fact it brings up memories of boarding schools, the motion reads “this could not be further from the truth.”

To the mothers and Lakota leaders, the hair cutting incident serves as a painful reminder of past and present repression. They hope the civil case can serve as a voice for the generations of Lakota children who have suffered in silence.

“(That little girl) didn’t have someone to speak up for her and say, ‘Don’t cut my child’s hair,’ ” Johnson said. “Now times have changed enough that we can speak up about it.”

Some of the names might be duplicates, but the true death toll is likely much higher, said Margaret Jacobs, a history professor at UNL and co-director of a project on the federal boarding school.

The ACLU accused the Cody-Kilgore school district of racial discrimination, saying it had an unwritten head-lice policy that applied only to Native students.

NASA prepares return to the moon

NASA prepares return to the moon

Norma LeRoy, 36, left, and Alice Johnson, 42, hold their daughters, ages 7 and 12, in Valentine City Park. LeRoy and Johnson filed a lawsuit against Cody-Kilgore Unified Schools after the girls’ hair was cut at the school in 2020. 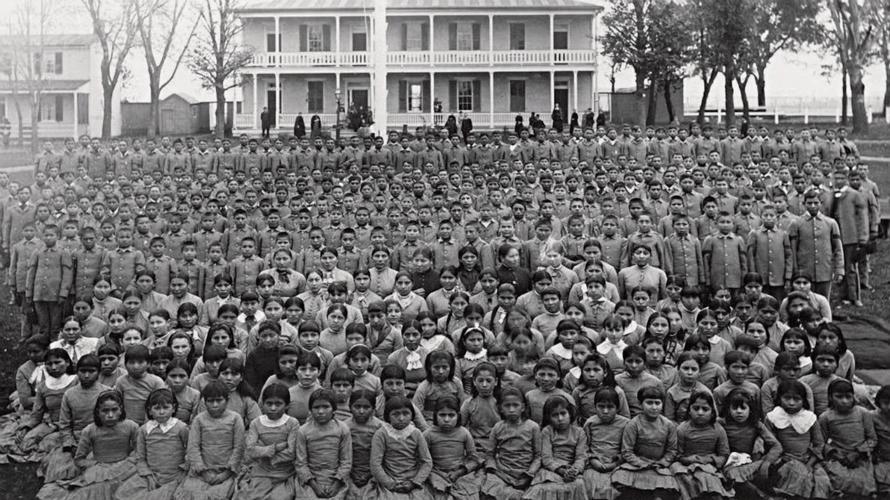 Native American children at the United States Indian Industrial School in Carlisle, Pennsylvania, in 1890. For more than a century, Native students’ long hair was routinely sheared at boarding schools. The hair cutting, part of an attempt to assimilate the students into White culture, violated religious and cultural beliefs, Native leaders say. 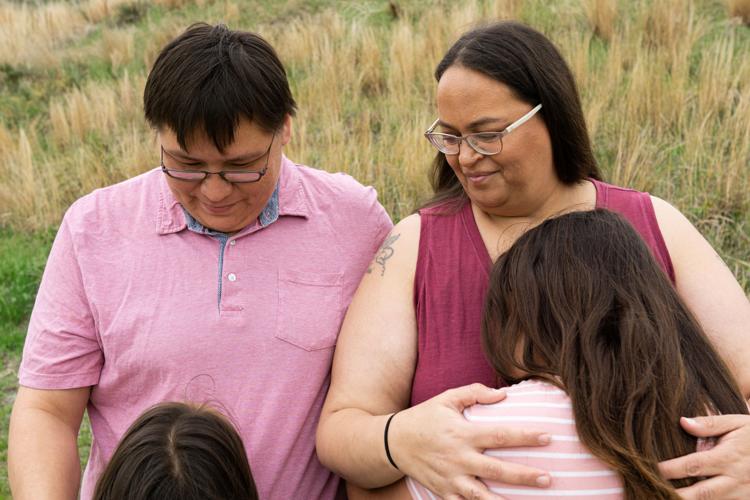 Norma LeRoy, 36, left, and Alice Johnson, 42, right, hold their daughters, ages 7 and 12, in Valentine on May 21. Leroy and Johnson say their daughters’ hair was cut at Cody-Kilgore Unified Schools in 2020. They have filed a lawsuit against the school, saying the hair cutting violated Lakota religious and cultural beliefs. The school’s lawyers have attempted to get the lawsuit dismissed, calling the hair cutting a lice check and saying they have ended the practice for Lakota children.

LeRoy and Johnson’s two youngest daughters hug. The Flatwater Free Press isn’t identifying the children or the school secretary who snipped their hair. 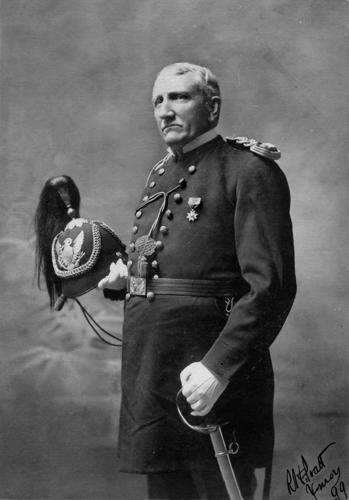 Capt. Richard Henry Pratt, who founded the Carlisle Indian School and infamously said, “All the Indian there is in the race should be dead. Kill the Indian in him, and save the man.” 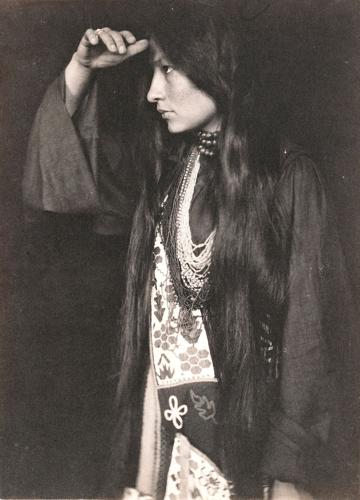 Lakota author and activist Zitkála-Šá, pictured in 1898. As a girl, she was forcibly sheared. As an adult, she wrote of the experience: “I cried aloud, shaking my head all the while until I felt the cold blades of the scissors against my neck, and heard them gnaw off one of my thick braids. Then I lost my spirit ... now I was only one of many little animals driven by a herder.”