U.S. and NATO ground forces may be steering clear of Ukraine following Russia’s invasion, but the alliance’s military reconnaissance aircraft — including several from Offutt Air Force Base — have been venturing close enough to keep eyes and ears on the battle below.

At least five of the 55th Wing’s C-135 variants have been spotted in European skies by air traffic control websites this week. Two have been operating from the Souda Bay naval base in Greece, and three are deployed to RAF Mildenhall, England — though one of those jets has apparently been sidelined after suffering an in-flight mechanical emergency Tuesday.

Collectively the Offutt jets flew 10 of the 86 surveillance missions known to have been flown over Europe by U.S., NATO, Swedish and Ukrainian aircraft between Sunday and Thursday, according to Amelia Smith, an online aircraft tracker who has been posting daily summaries on Twitter using her handle @ameliairheart.

Thursday, the first full day after Russia launched its widespread attack, saw 25 reconnaissance flights over the continent, the busiest day in the past three months. But the U.S. and NATO didn’t fly manned aircraft over Ukraine and the nearby Black Sea, instead pulling back to listen from the skies of Poland and Romania, which border Ukraine on the west.

Instead, they left flights over the conflict zone to unmanned aircraft. Smith noted that two remotely piloted RQ-4 Global Hawks flew long-duration missions over Ukraine and the Black Sea. Flying twice as high as other planes, the Global Hawks can see and hear far into Russian territory.

Three of the 55th Wing planes spotted this week are RC-135V/W Rivet Joints. They can listen to radar and radio signals on the ground up to 300 miles away, allowing them to monitor the location and movements of Russian forces.

Rivet Joint crews include analysts and linguists who can make sense of intercepted voice communications. The three planes flew a total of five missions earlier this week over Ukraine and near Crimea, a territory occupied and annexed by Russia in 2014. One Rivet Joint flying Thursday stayed in Poland.

The 55th Wing has also deployed an RC-135U Combat Sent to Greece, and a WC-135W Constant Phoenix to England.

The Combat Sent’s specialty is honing in on radar installations and pinpointing adversaries’ air defense systems. Though it flew missions off of Crimea earlier this month, its two flights earlier this week were both in the Eastern Mediterranean Sea near Lebanon and Syria, with no apparent connection to the Ukraine crisis.

The Constant Phoenix crew uses sensitive on-board equipment to gather atmospheric samples and check them for radioactive particles. It has previously been deployed off the coast of North Korea after that country’s nuclear tests. The same plane, tail number 61-2667, was used in 2011 to measure atmospheric radiation after the nuclear disaster at Fukushima, Japan.

The Constant Phoenix arrived in England Jan. 30, according to air-traffic monitoring websites, and has flown four times since. Air Force officials have said its deployment is also unrelated to Ukraine, and none of its flights have been near Ukrainian territory.

The Air Force’s only remaining nuke-sniffer, No. 61-2667 is known at Offutt as the oldest, crankiest and most trouble-prone plane in the fleet.

And it lived up to its reputation Tuesday, when its pilot declared an emergency shortly before landing at Mildenhall.

The aircraft, flying with the callsign JAKE21, had been airborne for 11 hours on a mission over the Baltic Sea when the pilot declared the emergency. He told controllers that the plane had experienced a failure of its hydraulic system, which controls braking and flaps, according to a recording posted on social media by a Dutch airplane spotter using the Twitter handle @EHEH_Spotter.

That’s a common problem among aged aircraft like the WC-135W, which was delivered to the Air Force from a Boeing assembly line in April 1962.

Still, he said, in some cases the lack of anti-skid protection can lead to blown tires, among other problems.

Fire, rescue and police vehicles met the plane when it landed at Mildenhall at 4:39 p.m. local time carrying a crew of eight.

“The crew followed all prescribed emergency and safety procedures,” according to a statement from the 100th Air Refueling Wing at Mildenhall. “Everyone on board returned safely with no injuries.”

The same plane was grounded for nearly two months last year in Australia, also after suffering a hydraulic failure. The WC-135W had the second-worst “mission-capable” rate of any aircraft type in the Air Force in 2021 at just over 48%, meaning it was mechanically capable of flying its assigned missions less than half the time.

No. 61-2667 is the only one of the 55th Wing’s C-135 variants that hasn’t received upgraded engines and flight systems since it was built. Only very experienced pilots are allowed to fly it.

The plane won’t be around much longer. The Air Force ordered three WC-135R aerial tankers refitted for the radiation-monitoring mission, at a cost of $218 million. The first is scheduled for delivery this summer. No. 61-2667 is slated to be retired to the Air Force’s Arizona boneyard soon after.

The Air Force’s only “nuke-sniffer” aircraft for detecting airborne radiation is back home in Nebraska after mechanical problems sidelined it for two months in Australia.

Persistent mechanical problems may plague the 55th Wing's half-century-old fleet of reconnaissance jets, but the Air Force is in no hurry to buy new ones. It plans to squeeze 30 more years out of the Offutt-based C-135s.

The commander of the Offutt-based 55th Wing called the addition of three new Constant Phoenix nuke-sniffer planes "a game-changer." 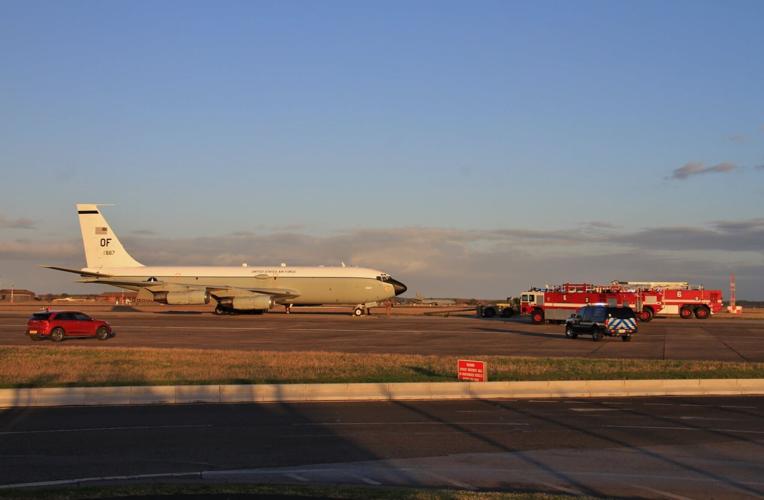 Fire and rescue vehicles met a WC-135W aircraft (No. 61-2667) from Offutt Air Force Base's 55th Wing on Feb. 22 after the pilot declared an emergency and landed at RAF Mildenhall, England. The incident occurred near the end of an 11-hour radiation-monitoring mission over the Baltic Sea. 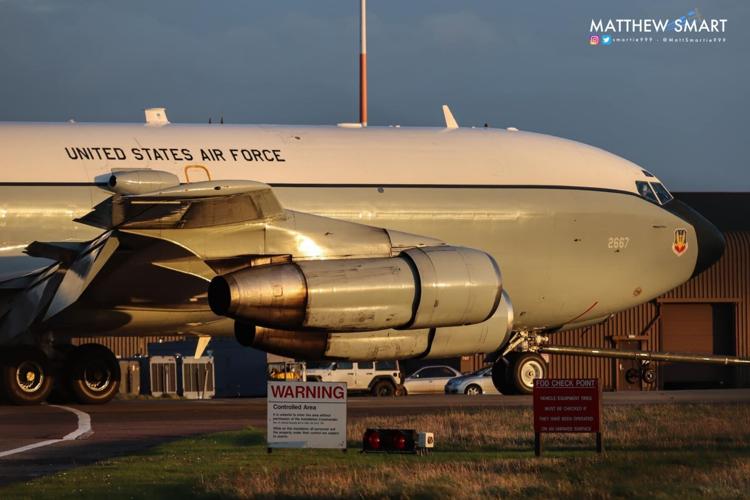 The aircraft is towed back to the hangar after the emergency landing at RAF Mildenhall. The 60-year-old plane, carrying a crew of eight, landed without incident. 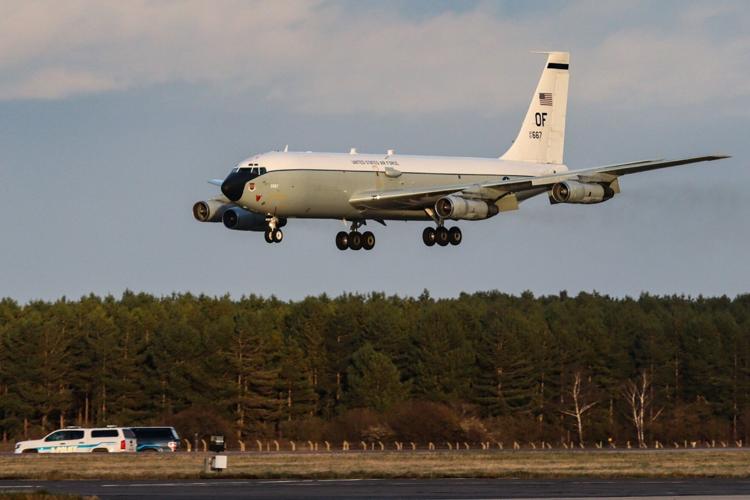 Police vehicles are visible next to the runway at RAF Mildenhall, England, Feb. 22 as a WC-135W aircraft (No. 61-2667) from Offutt Air Force Base's 55th Wing lands. The pilot had declared an emergency because of a hydraulic system failure near the end of an 11-hour radiation-monitoring mission over the Baltic Sea. The plane, carrying a crew of eight, landed without incident. 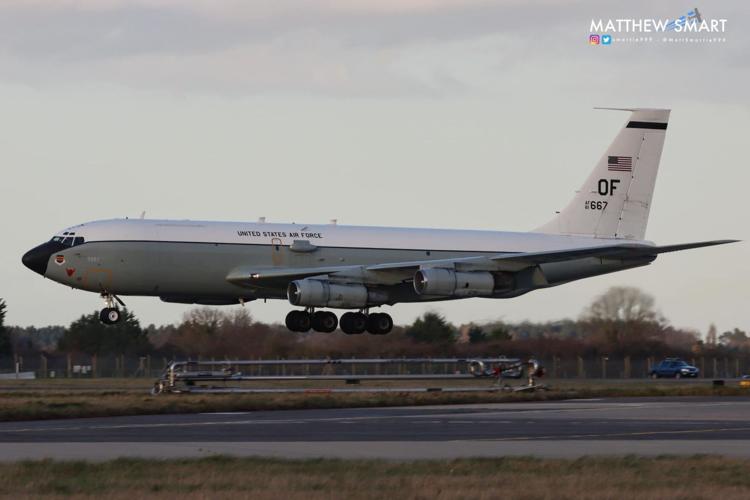 A WC-135W aircraft (No. 61-2667) from Offutt Air Force Base's 55th Wing touches down at RAF Mildenhall, England, Feb. 22 after declaring an emergency near the end of an 11-hour radiation-monitoring mission over the Baltic Sea. The plane, carrying a crew of eight, landed without incident.