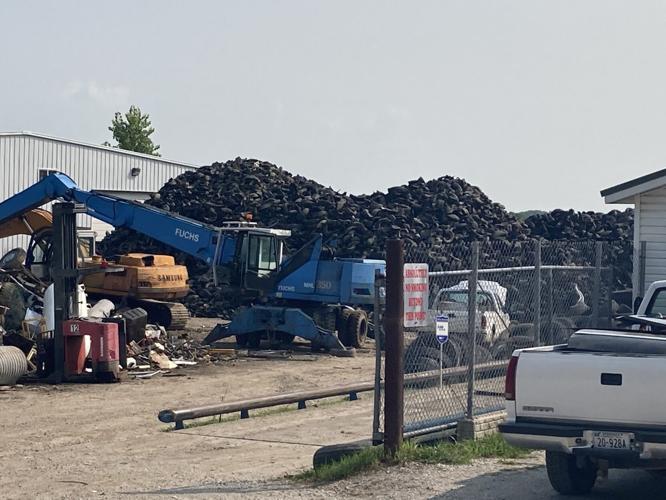 A tire recycling facility in the small village of Alvo, Nebraska, has made progress on reducing its mountain of tires, but some residents say the cleanup is not moving fast enough. 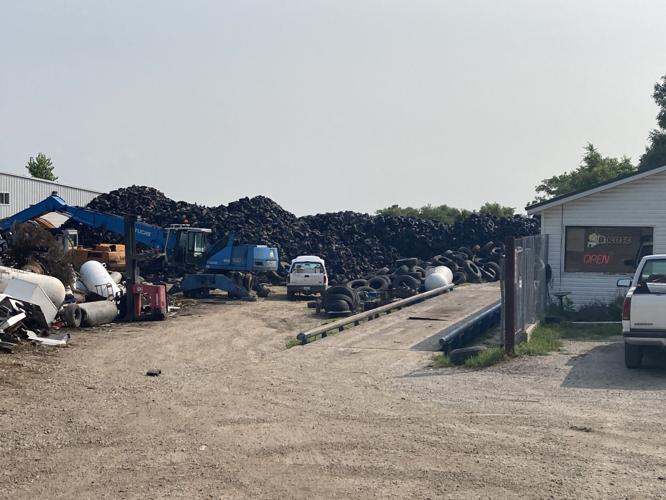 A tire recycling facility in the small village of Alvo has made progress on shrinking a mountain of tires, but some residents say the cleanup is not moving fast enough.

ALVO, Neb. — A mountain of scrap tires in a small southeast Nebraska village that raised fears about an uncontrollable fire and health hazards appears to be shrinking, but it has not yet come into full compliance with orders from state fire and environmental regulators.

The operators of the tire recycling business, B-Rose Tire Recycling and its affiliate, LAL Enterprises, signed legal agreements earlier this year to reduce the tire pile by July 1 to 240,000 passenger tire equivalents (PTEs), which is a calculation of the car, truck and tractor tires collected.

But the operation’s July 1 report to the Nebraska Department of Environment and Energy (NDEE) fell short of that mark, reporting 247,706 PTEs “on the ground.”

The business also hasn’t yet come into full compliance with an agreement to provide fire lanes between tire piles and exterior fences to improve fire safety, according to an official with the State Fire Marshal’s Office.

Mountain of tires in Nebraska village has residents worried about fire, environmental threat

The tire pile at one point had grown to more than twice its allowable limit of 160,000 PTEs, prompting outrage from some residents of Alvo, a village of 130 people about 40 miles southwest of Omaha.

They still worry that if a fire ignited, it would force an evacuation of the entire town, which has no volunteer fire department.

“We need to get this cleaned up for the safety of our community now,” said Dennis Tempelmeyer, a retiree who lives about two blocks from the tire recycling operation.

Regina Shields, a spokeswoman for the Fire Marshal’s Office, said an inspector noted that the operation had made progress toward compliance. The business, she said, was given more time to make the required changes.

A spokeswoman for NDEE provided a different estimate Tuesday on how many scrap tires remain at the Alvo yard: 239,346 PTEs, a calculation by the state using year-end 2020 figures and transfers to the landfill.

Emily Case of NDEE said the important benchmark will be whether D-Rose/LAL can eventually reduce its scrap tire inventory to 160,000 PTEs by Sept. 1 as it has agreed to do.

“Progress toward compliance has been steady,” Case said, “and is supported by our various methods of estimating the amount of waste tires on site.”

The turmoil over tires has continued for more than a year, and has included multiple requests from state regulators to voluntarily come into compliance — requests that went unheeded.

That prompted the state and the tire recyclers to sign a legal, consent order in April. It decreed that the tire pile would be reduced to 240,000 PTEs by July 1, and then shrunk to 160,000 PTEs by Sept. 1. The operation also agreed to come into compliance by June 30 with state fire regulations.

Beth Rose, who operates the tire recycling business with Larry Langer, said Friday that several trucks would be hauling tires away on Monday that would reduce the pile further. She said they are hoping to come into full compliance by mid-August with the consent orders.

“Then there won’t be a pile for people to think about and have a heart attack over,” Rose said.

When the site was visited Tuesday by a reporter, a large pile of shredded tires, at least 20 feet high, could be seen near the entrance of the recycling company’s yard. Behind it, even larger piles of unshredded scrap tires stood.

The sea of tires has shrunk significantly from October, when it was estimated to contain 323,228 PTEs. That was more than twice as many scrap tires as B-Rose was permitted by the state to have on site. The operators said a breakdown of their tire shredder was to blame, as well as health issues.

The business collects scrap tires from service stations and tire stores across the state, then shreds them and transports them to a landfill near David City, the only outlet for scrap tires in the state.

State regulators first noticed the tire pile growing beyond regulatory limits in a year-end report in 2019.

Several state regulations pertain to scrap tire recycling and storage, due to the fire threat tires represent and that scrap tires serve as breeding grounds for mosquitoes. Tire fires are especially hard to put out and create dangerous plumes of smoke.

The order from the Fire Marshal’s Office, for instance, requires any tire pile to be no larger than 20 feet high and covering an area no larger than 50-by-250 feet.

Officials with NDEE have said that by state law, they are expected to make every effort to obtain voluntary compliance with state rules before seeking fines or sanctions. They also said that closing down the Alvo operation would mean that state taxpayers would have to pay for a cleanup.

But Tempelmeyer said the clean up isn’t moving as fast as it should. Overall, he said he thinks the state shouldn’t be giving the recyclers “extra time again.”

“I think they ought to get fined,” Tempelmeyer said.

Nebraska senator makes another run at answers on AltEn

The scrape over scrap tires is just the latest controversy to hit the Cass County village. In 2018, Alvo’s village clerk pleaded guilty to embezzling $105,000 in town funds. Last year, a state audit led to criminal charges against the fire chief, accusing him of using $18,000 in Fire Department funds for personal expenses. In between, a handful of volunteer rescue squad members were fired.

Rose said the complaints about their tire recycling business are all related to the other turmoil in town, though Tempelmeyer said there is no relationship.

The controversy now has a new facet — a petition was filed July 9 to recall the village board chair, Robin LaPage, alleging that not enough has been done to reduce the sea of rubber.

The petition alleges, among other things, that LaPage hasn’t done enough to crack down on the recycling operation. LaPage did not return phone messages left on Friday and Monday.

To hold a recall election, signatures must be collected from a percentage of registered voters. Based on state law and recent election results, the Alvo recall needs 18 signatures, according to the Cass County Election Commissioner’s Office.

An inspection report concluded that B-Rose Tire Recycling of Alvo had made "obvious visual progress" and had come into compliance with a Sept. 1 deadline to reduce its scrap tire inventory.

A tire recycling facility in the small village of Alvo, Nebraska, has made progress on reducing its mountain of tires, but some residents say the cleanup is not moving fast enough.

A tire recycling facility in the small village of Alvo has made progress on shrinking a mountain of tires, but some residents say the cleanup is not moving fast enough.