As Nebraska deals with labor shortage, companies get creative in filling jobs
0 Comments
Share this

Andrew Tauzier has always wanted to be a welder.

For years, the 36-year-old couldn’t find the time or the money to get the training required for the occupation.

That all changed in July, when Tauzier got a career-making break. The Lozier Corporation in Omaha hired him and seven others with no previous welding experience, giving them free training and hiring bonuses.

Not only that, but Tauzier wound up making $22 per hour at Lozier, up from the $18 per hour he was earning at another manufacturing plant.

Tight job market, vacancies prompt Nebraska to offer hiring bonuses of up to $15,000

“It was the right place at the right time, I guess you could say,” said Tauzier, who saw an ad for Lozier’s hiring event on social media. “This gave me the perfect opportunity.”

Tauzier’s opportunity came as Nebraska employers get creative — and sometimes more generous — as they try to fill vacancies during the state’s acute labor shortage. Nebraska has tens of thousands of job openings at a time when Nebraska’s unemployment rate is 2.2%, its lowest since the state began collecting unemployment data in 1976.

As of Monday, around 52,000 job openings are posted on the state’s NEworks website. That is more than double the 22,364 people listed as unemployed as of August.

Are federal unemployment benefits keeping people out of the workforce?

Earlier this month, the website CareerCloud reported that Nebraska has the second-highest ratio of unemployed individuals to job openings in the nation. The CareerCloud analysis, using data through March from the Bureau of Labor Statistics and job openings posted in August on various employment websites, said Nebraska had 1.8 openings for every unemployed person.

For companies that are looking for workers with specific skills, the labor shortage can be particularly challenging.

Lozier, which manufactures fixtures for retail stores, was looking in July to hire an additional 20 welders.

The company’s pitch to prospective hires such as Tauzier included training in a two-week course at Metropolitan Community College. That was on top of Lozier’s earlier decision to boost its hourly wages by $1 to $3 and $1,000 hiring bonuses after 90 days of employment.

Without the training program, Lozier would have been able to hire just five certified welders. Instead, it wound up with 13 new hires — short of the goal of filling 20 positions, but enough to help the company keep up with a surge in demand for its products, Bolte said. Before the July event, Lozier employed 59 welders.

Another business, Cobalt Credit Union, has filled customer service and cash-handling jobs by finding people who have worked in other industries. According to executives Erin Maloney and Allison Malone, the credit union has taken steps such as increasing employee referral bonuses and being flexible with employees’ personal lives.

Finding people to fill open positions in Nebraska has been a challenge for a decade, according to Eric Thompson, an economist with the University of Nebraska-Lincoln. The COVID-19 pandemic has exacerbated that challenge, particularly after its onset in spring 2020 plunged the economy into a sharp recession and created the vacant positions many employers are still attempting to fill.

“It’s not that unusual to have a higher (number of) openings in the period just after a recession and the recovery begins. But it does seem like it’s a bit worse this time,” Thompson said.

The reasons are numerous and varied, economists say, ranging from mismatches in skills to wage levels to immigration policy.

Jorden Hansen, a UNO graduate student who worked with Decker to publish an economic report and outlook for the Omaha area this past June, agreed.

“There are people who are skilled in certain things and the work isn’t available for them to do that. Then you have to do the training and transformation to find work that is more applicable and available,” she said. “That can be a challenge.”

In some cases, the labor shortage may be a result of people re-evaluating their priorities and desires during the pandemic. Thompson theorized that prospective employees in customer-facing industries, including leisure and hospitality, might be apprehensive because they would be dealing with people who might not be vaccinated.

And local economists say some people, after being unemployed for a period of time, perhaps realized their financial and family situation didn’t depend entirely on their employment and instead could focus on other objectives such as going back to school or raising a family.

Both Thompson and Creighton University economist Ernie Goss theorized that money from the federal government, including stimulus checks and the recently expired enhanced unemployment benefits, could have played a role in the labor shortage. In some cases, Goss said, low-wage workers have made more money unemployed.

“I think that, at all levels, the government needs to incentivize work and disincentivize leisure,” Goss said. “The gap between what you make for working and what you make for leisure is too narrow. ... At the low wage end, we need to see that gap widened whether that’s through incentives for working or disincentives for leisure. One of those needs to happen.”

Goss also said it’s difficult for workers to afford child care when they may be earning just $12 to $14 an hour.

By another measure, wage growth has lagged behind inflation, effectively resulting in a net loss in workers’ pay. Federal wage statistics in August for the manufacturing industry show 5.2% wage growth over 2020 but an 8% increase in cost of living, Goss said, which he attributes to increases in the money supply and the stimulus spending.

For employers looking to hire employees, Goss said, the impact of inflation on spending power is a big problem.

“You’re counting on workers being irrational or stupid. They’re neither one. They know how inflation works,” he said.

If employers wish to fill their vacancies, Macy Sarbacker, editor of CareerCloud, suggests they continue to adopt measures some companies have adopted during the pandemic. Those include increasing wages, allowing employees to work from home and being flexible with parental leave.

The CareerCloud study noted that the number of ZipRecruiter job postings advertising wages of $15 per hour has doubled since 2019. The study also noted a survey from management consultant firm McKinsey & Company that 52% of workers want a hybrid work model.

The Omaha Public Power District embraced that model early on in the pandemic. John Staup, the OPPD director of talent acquisition, said the public utility even hired a moving company to bring office equipment to about 800 employees’ homes. OPPD has about 1,850 employees.

“It was incredibly important for us to understand the criticality of what was going on,” he said.

The study also suggests employers help with commuting for workers who cannot work from home. That could include subsidizing commuting costs, providing a corporate shuttle or allowing employees to work longer but fewer shifts.

Ultimately, Thompson said it’s up to individual businesses to figure out how to address their labor shortages through measures such as wage increases and work-from-home flexibility.

“You always have to weigh the short-term situation versus the long-term consequences,” he said. “If they don’t see those things as viable solutions for their businesses in the long run, it may not be worth taking those steps. It may be better just to be short of labor for a period. That’s another decision businesses will always have to wrestle with.”

For both Lozier and Tauzier, the decision to hire and train him as a welder is paying dividends. Bolte said Tauzier is highly regarded by his colleagues and supervisors. And Tauzier, who is married with two children, can now focus on saving up to buy a house since he’s landed his dream job.

“I’ll be completely honest with you: I plan on retiring in a place like this,” he said. “The company just seems perfect for me.”

A global parts shortage has led to sparse lots at car dealerships in the Omaha area and unfinished combines at a Grand Island plant.

Having spent nearly a century in downtown Fremont, Sampter’s will soon close its doors for the final time.

With uncertain delivery schedules this holiday season, some Omaha retailers have been preparing for possible inventory shortages by ordering their items early.

State of Nebraska raises pay for 7,500 workers, including some at prisons

Some employees at 24/7 facilities will receive a $3 per hour pay increase. The tentative deal does not include security staff at prisons, who are represented by a different union.

Money raised went to support the striking Kellogg's workers and Project Reset, a program helps people who have become entangled in the justice system and want to find skilled labor employment.

That situation represents both good news and a challenge for the state, a leading business official said Friday.

The outage impacts about 600 MUD customers in the areas of 16th Street, to the North Freeway, and Locust Street to Sahler Street, MUD said Wednesday.

Nebraska economy fared better than most other states in 2021, economists say

In a year largely defined by inflation, labor shortages, rising wages and supply chain struggles, economists and business leaders interviewed agreed that Nebraska fared better than most of the nation. 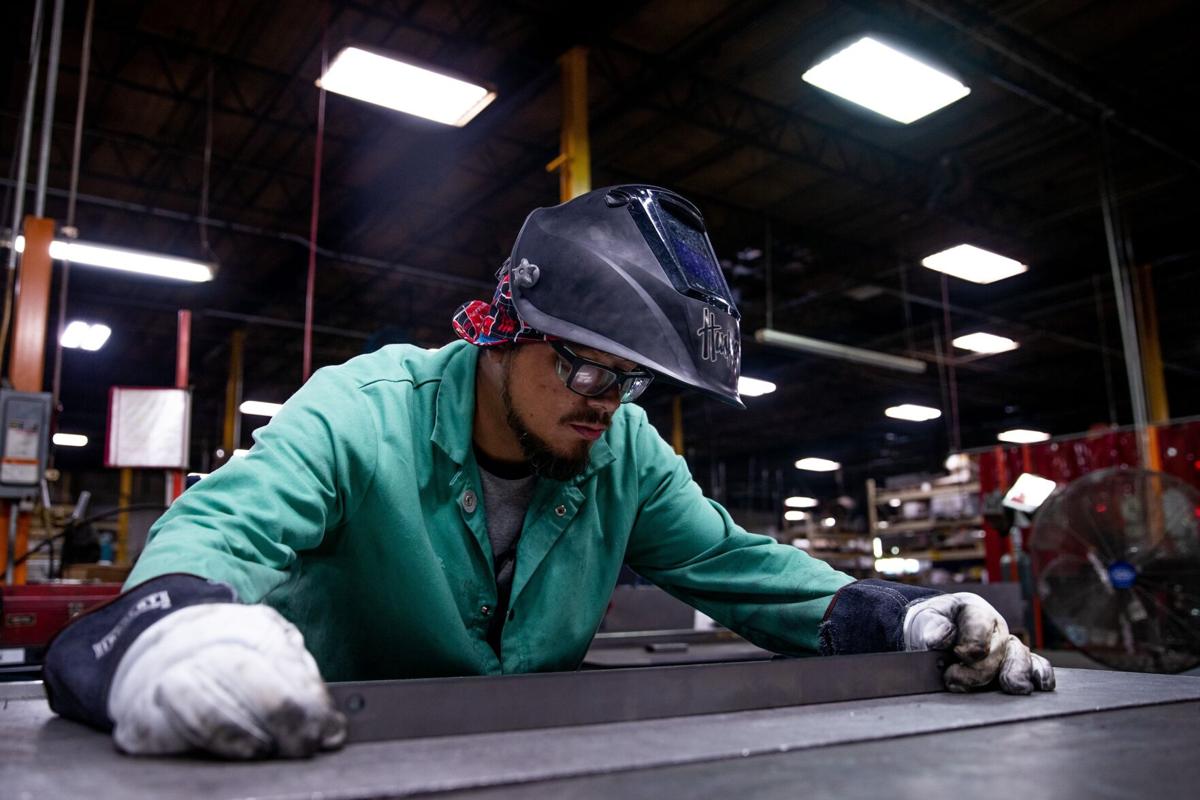 Andrew Tauzier, 36, of Omaha, lines up pieces of metal to weld together welds at Lozier in Omaha on Wednesday. Tauzier went through a condensed welding training session through Metropolitan Community College, paid for by Lozier. 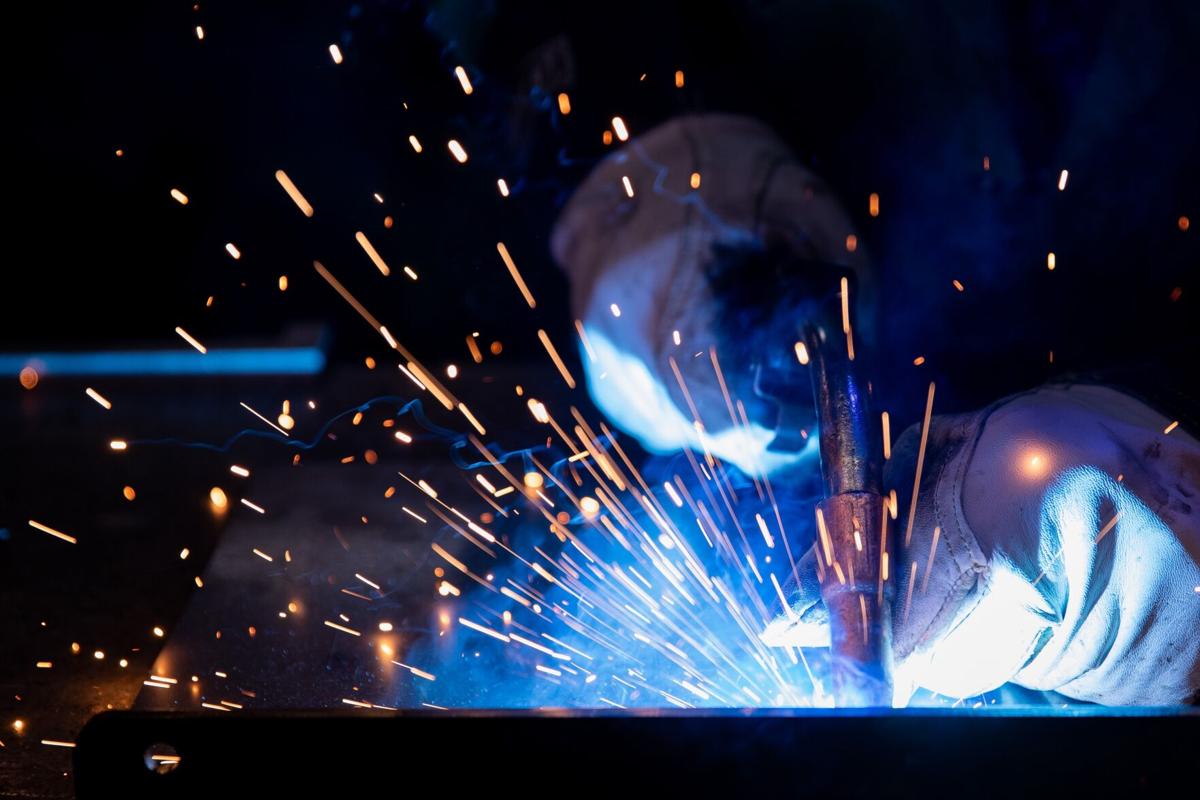 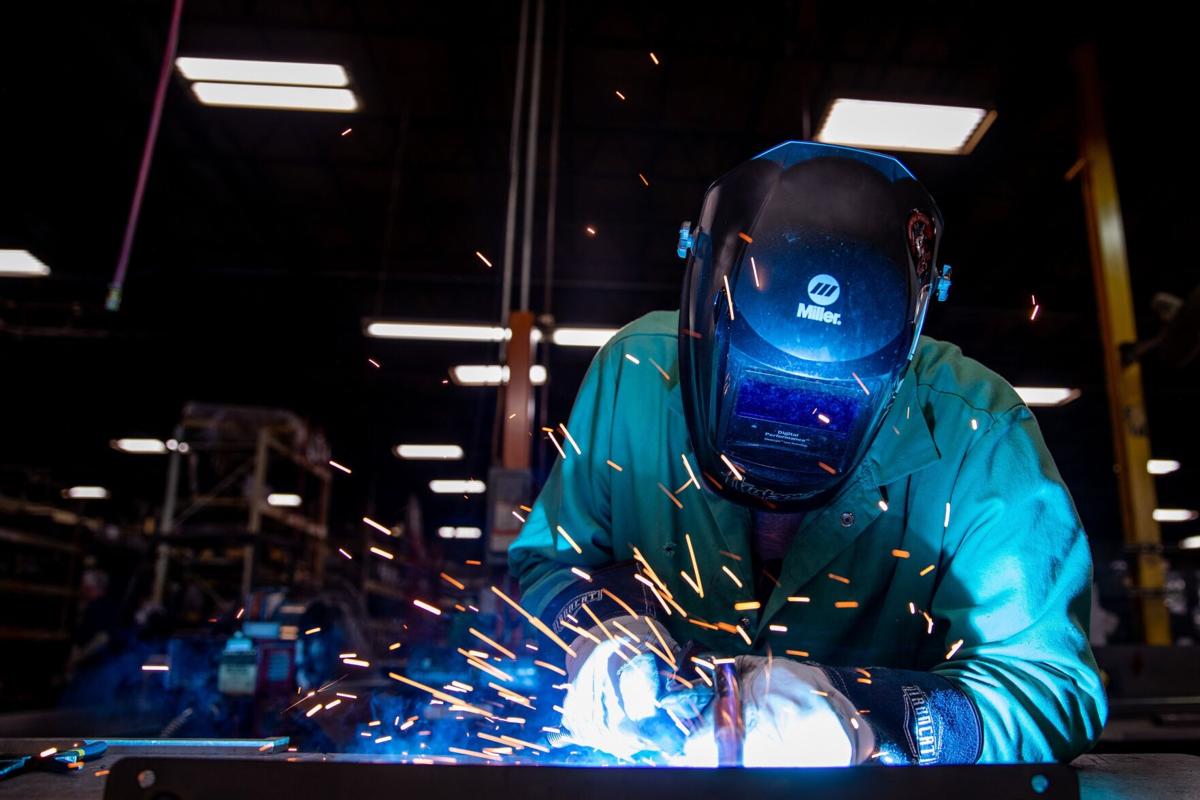 Andrew Tauzier of Omaha welds at his job with the Lozier Corporation on Wednesday. Tauzier, who had no previous welding experience, was hired in July by Lozier, which paid for his training course at Metropolitan Community College. 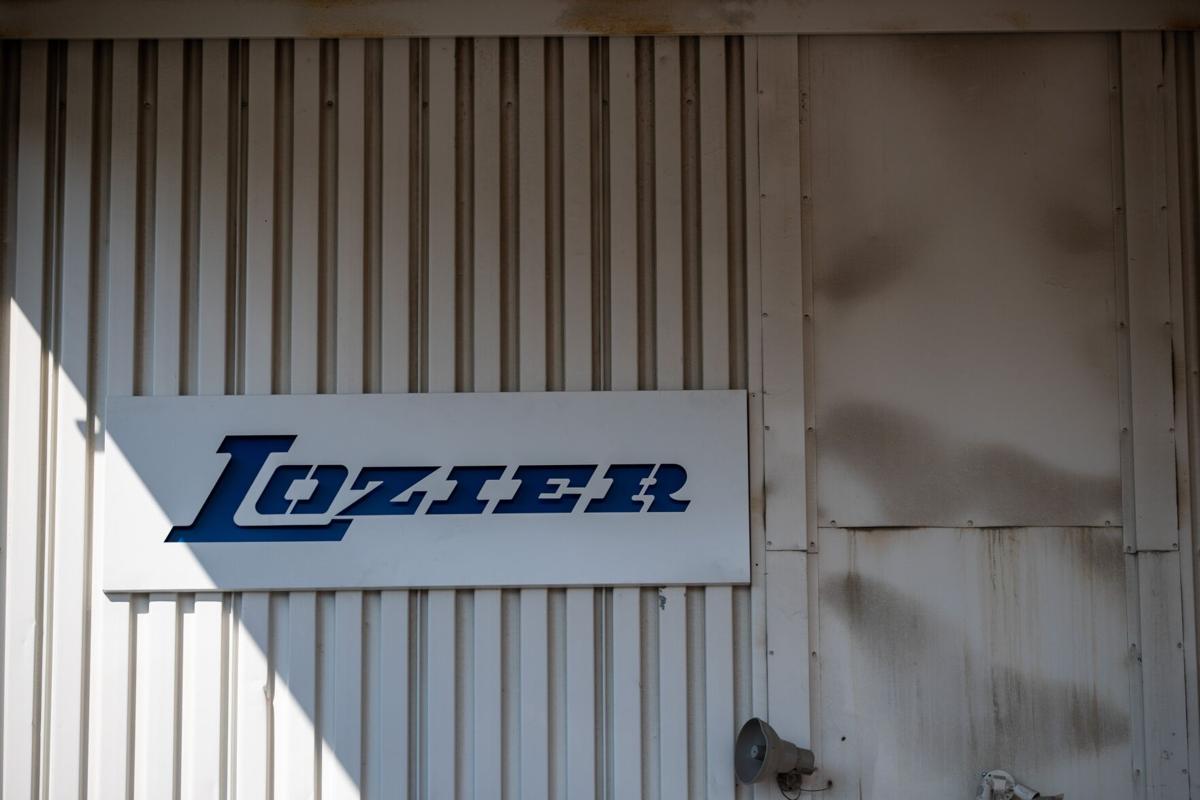 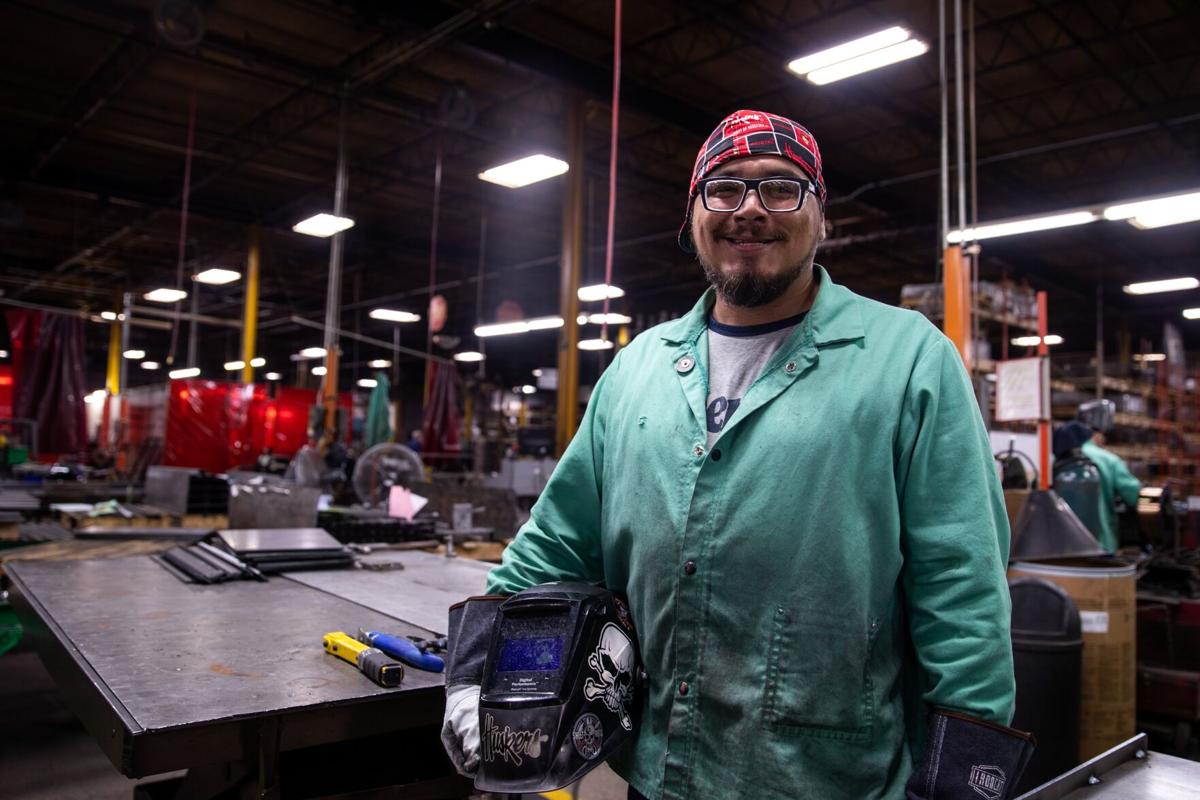 Andrew Tauzier went through a welding training course, paid for by the Lozier Corporation, when he was hired as a welder by Lozier. “This gave me the perfect opportunity," Tauzier said.