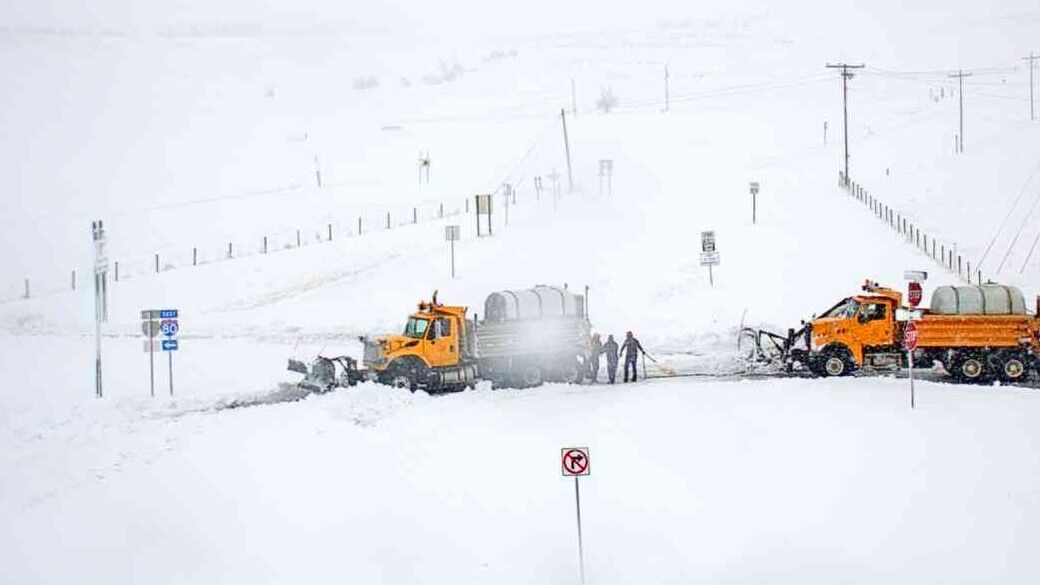 A monster storm roared across the Plains on Sunday, spinning a blizzard through western Nebraska and delivering record rain to the eastern side of the state.

The storm was part of a windy, moisture-rich system that shut down road and air travel in Colorado, Wyoming, Nebraska and neighboring states. Scattered power outages also occurred across parts of the central U.S.

Westbound Interstate 80 was closed at a succession of Nebraska cities as first one then another community overflowed with stranded travelers. Denver International Airport shut down, which had ripple effects across the region, canceling flights at places like Eppley Airfield. The opening of westbound I-80 in Nebraska will depend on when the snow is cleared in the Panhandle and Wyoming, roads officials said.

The blizzard was forecast to continue into Monday morning. As of Sunday evening, westbound I-80 was closed at Kearney.

On the eastern side of Nebraska, the National Weather Service monitored rising creeks and rivers for flooding as the same powerful storm delivered 1 to 5-plus inches of rain, with more falling.

Thanks to the ongoing drought, it appeared that flooding would be mostly limited to lowlands, according to the weather service. A handful of creeks — the Shell, Wahoo, Lincoln and Maple — and the Big Blue River were expected to see moderate flooding. As those streams rose, some nearby roads closed.

Minor flooding is possible along the Platte River, and the Missouri River might approach flood stage at Nebraska City and points south, according to the weather service.

In western Nebraska, roads became impassible as more than a foot of snow fell and winds gusted between 50 mph and 60 mph.

“Most every highway and road is shut down in the panhandle,” the Nebraska State Patrol tweeted Sunday afternoon. “PLEASE don’t go out ...”

Most every highway and road is shutdown in the panhandle. PLEASE don’t go out on the roads, PLEASE STAY HOME, warm, and safe!! pic.twitter.com/FCn7MPddWH

Nonetheless, some people did venture out and got stuck, requiring rescue by the State Patrol and road crews. A power outage in Banner County forced emergency workers out into the blizzard. About 100 customers in the county lost power, and both the patrol and the Department of Transportation pitched in to plow a route so utility crews could reach and repair downed power lines.

“Tough conditions like this require good teamwork,” the patrol tweeted.

Higher temperatures in central and eastern Nebraska kept the snow at bay but not the moisture. With rain still falling, Lincoln set an all-time March record for the rainiest day. Omaha and other cities set daily records but not monthly records, according to the weather service.

On Sunday, 2.33 inches of rain had fallen in Lincoln by the afternoon. That broke the month’s previous record for wettest day, 1.96 inches, set on March 25, 1906, said Dave Eastlack, a weather service meteorologist.

Storm totals were higher because the rain began Saturday, and it was to continue into Monday morning.

Far western Nebraska could get most snow in about 20 years; officials urge against travel

A National Weather Service meteorologist said snowfall may reach 18 inches or more in spots such as Chadron, Scottsbluff and Kimball, while the northwest Sand Hills may see about 10 inches.

I-80 reopens for some, but many truckers still stranded in Nebraska

Nebraska communities along Interstate 80 filled with semis and other vehicles on Monday as a blizzard-induced closure of westbound Interstate 80 continued into its third night.

Interstate 80 in Wyoming reopens to traffic in both directions