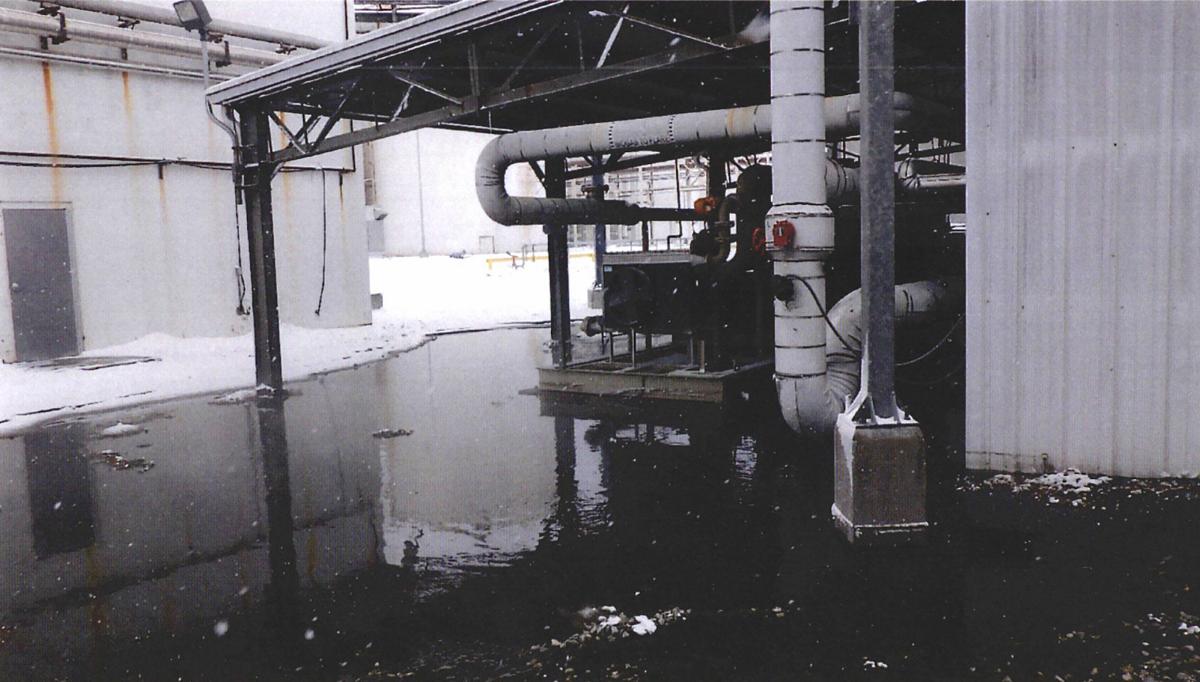 Water pools west of the leaking digester at the AltEn ethanol plant near Mead, Nebraska, on Feb. 12 after a pipe burst on the tank early that morning. 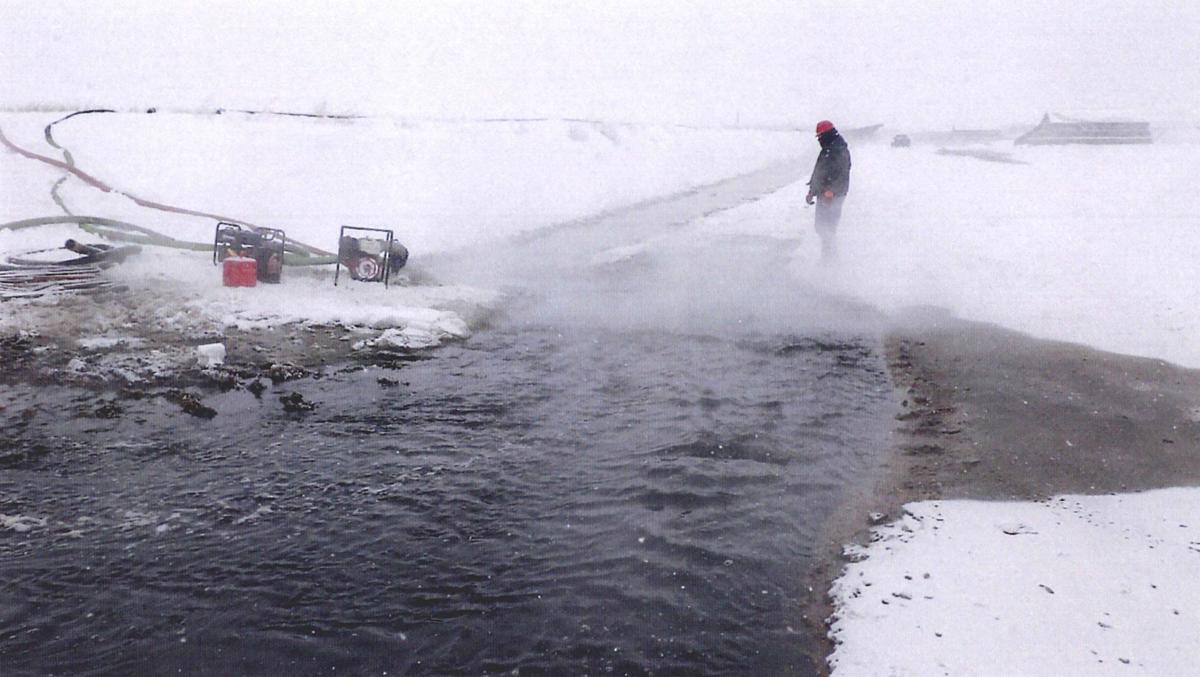 AltEn ethanol employees use trash pumps to transport water into an emergency lagoon Feb. 12. A pipe burst on a 4 million-gallon digester tank at the Mead, Nebraska, plant late last week, releasing waste material into the waterways and culverts more than 4 miles from the plant, according to the Nebraska Department of Environment and Energy.

Cleanup efforts are continuing after a frozen pipe burst at the troubled AltEn ethanol plant near Mead, Nebraska, releasing wastewater from a 4 million-gallon tank into Saunders County waterways last week.

On Thursday, AltEn submitted a plan to recover the discharged waste with the Nebraska Department of Environment and Energy, which is overseeing the task with help from the Environmental Protection Agency.

Area residents will continue to see machinery and mitigation work as the waste is cleaned up, the department said in a press release.

According to an investigative report made public on Thursday, AltEn General Manager Scott Tingelhoff reported the leak from the large digester tank about 3 a.m. Feb. 12.

A frozen pipe broke below ground on the southeast side of the tank, releasing a discharge containing manure from the nearby feedyard and thin stillage — a byproduct of AltEn’s ethanol process.

Because AltEn uses treated seed instead of harvested grain to produce the fuel, it’s likely that the thin stillage is contaminated with pesticides, which have been detected in the plant’s lagoons and other waste byproducts at high concentrations.

Dark-colored water was still rushing from the ruptured pipe when regulators arrived at 1 p.m. Feb. 12, the report said.

Although an “unknown quantity” of the waste was in the digester, the report indicated company officials believed that 4 million gallons of material, some of it in the tanks for three years, was released.

Immediately after, AltEn employees built makeshift dams in several ditches on the facility’s property, as well as downstream, to hold back the heavy flow of wastewater, the report said.

But that had little effect, as an inspector found a stormwater ditch overwhelmed and the waste pooled to create a small lake near the Mead Cattle Co.

Further downstream, University of Nebraska-Lincoln officials were making their own attempts to stop the discharge, plugging a ditch with plastic, hay bales and cement, but the wastewater still made it onto the property of the Eastern Nebraska Research and Extension Center about a mile away.

Earlier this week, the state said wastewater had traveled as far as 4½ miles downstream but had stopped. It’s not believed to have reached the Platte River.

Since the spill took place, AltEn employees have used multiple pumps to recover the discharge into an emergency lagoon at the facility, Tingelhoff said.

The ethanol plant also began the task of pumping discharge collected at several barriers erected in waterways both on AltEn’s property and downstream.

The wastewater was also directed into the emergency lagoon, which can hold 6 million gallons.

“Once each location is pumped as completely as possible, AltEn will introduce additional clean water into the ditch in order to flush out and clean any potential residue remains,” the company said in its plan filed with the state. “That water will also be pumped back into AltEn’s lagoon system.”

AltEn raised concerns about the condition of a second 4 million-gallon digester tank on its property, telling the state that it had added insulation and an external heat source to prevent another pipe from rupturing during the cold snap.

“If material from the second digester were to be discharged, efforts similar to what was performed with the first (south) digester spill would be made to contain the spill on AltEn’s property,” Tingelhoff wrote.

To prevent that from happening, AltEn asked the state’s permission to drain the second digester tank into its deteriorating lagoon system. Earlier this month, the Department of Environment and Energy ordered AltEn to cease operations until it could repair the lagoon system and bring it in line with state regulations.

“The focus should be getting the waste materials out of the ditch before weather adversely impacts cleanup,” he said.

The state also told AltEn that it should use the emergency lagoon “to the extent practicable” and minimize the flush water used to avoid further problems with the system.“While your chosen course of action may result in temporary violation of the emergency order not to add wastes to the lagoons, NDEE will take into consideration the need to take such emergency response measures to address the immediate discharge and mitigate further harm,” Pracheil wrote.

The Saunders County Board of Supervisors has scheduled a public meeting concerning the AltEn Ethanol plant for 7 p.m. on March 1.

The meeting will be in the gymnasium at Mead High School.

The Nebraska Department of Environment and Energy has ordered the plant closed, but issues are ongoing.

State officials on Friday were monitoring a wastewater discharge from an ethanol plant near Mead that had been ordered to close a week ago because of concerns about pollution of air, water and land.

The emergency declaration will allow Saunders County to spend emergency funds, invoke mutual aid and apply for emergency assistance from the state for cleanup efforts after the wastewater spill.

Water pools west of the leaking digester at the AltEn ethanol plant near Mead, Nebraska, on Feb. 12 after a pipe burst on the tank early that morning.

AltEn ethanol employees use trash pumps to transport water into an emergency lagoon Feb. 12. A pipe burst on a 4 million-gallon digester tank at the Mead, Nebraska, plant late last week, releasing waste material into the waterways and culverts more than 4 miles from the plant, according to the Nebraska Department of Environment and Energy.