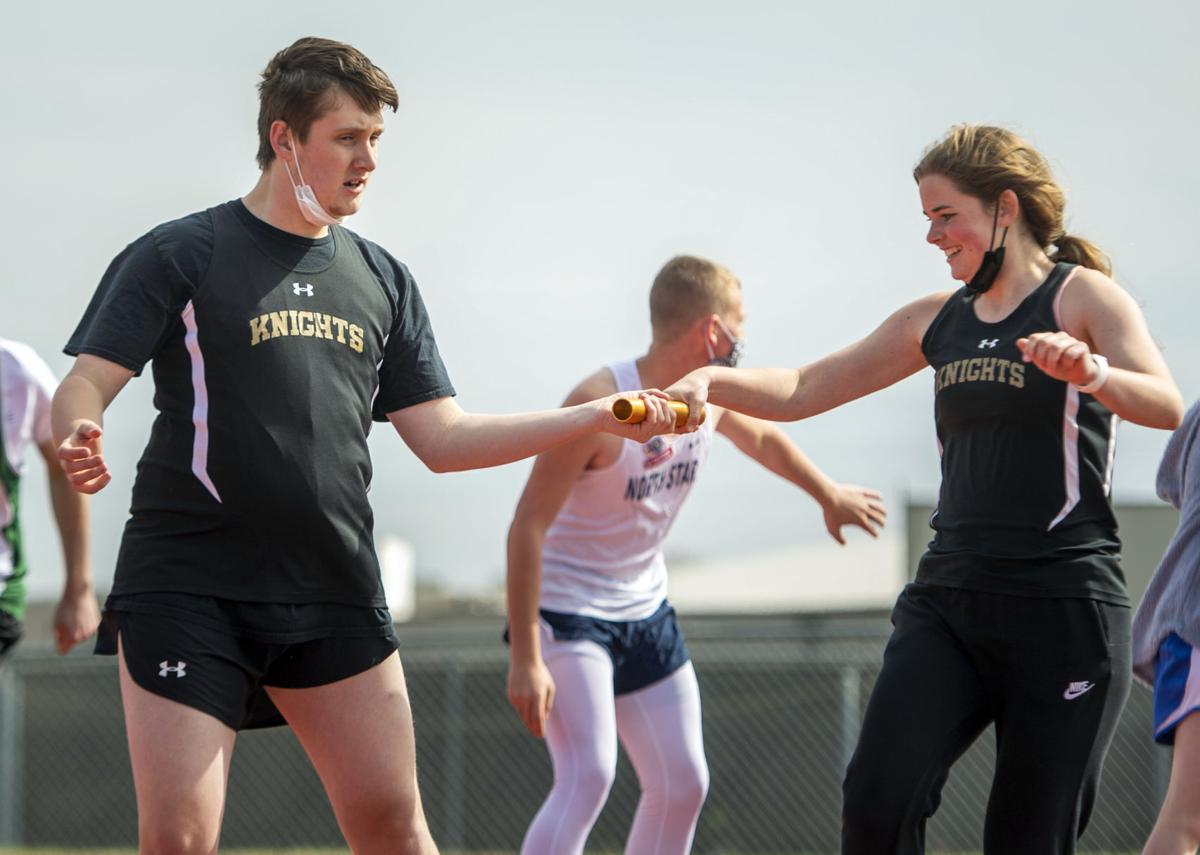 Lincoln Southwest’s Carson Truax, left, takes the baton from teammate Cora Scott during Wednesday’s season-opening unified track and field meet. “Everybody gets to just be, and everybody gets to have fun,” coach Brandi Benson said. 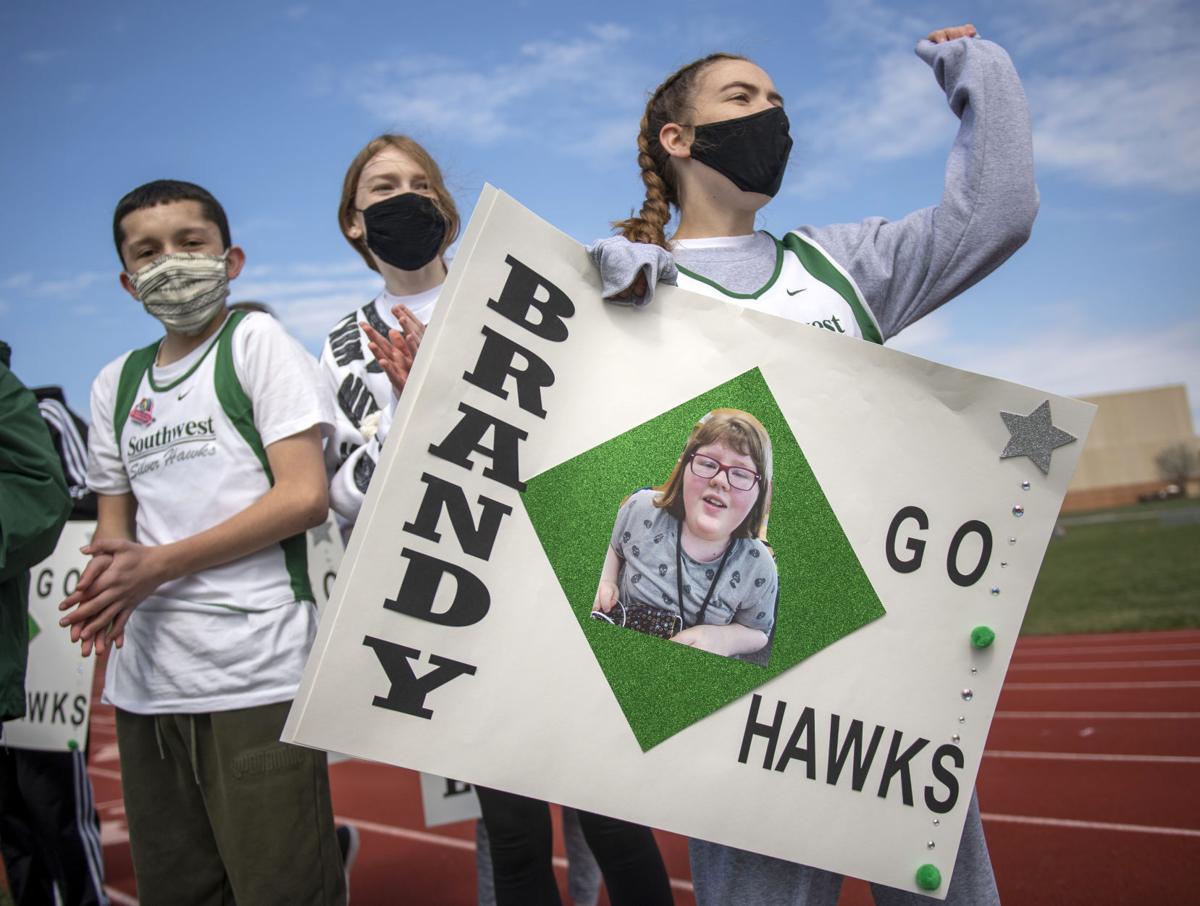 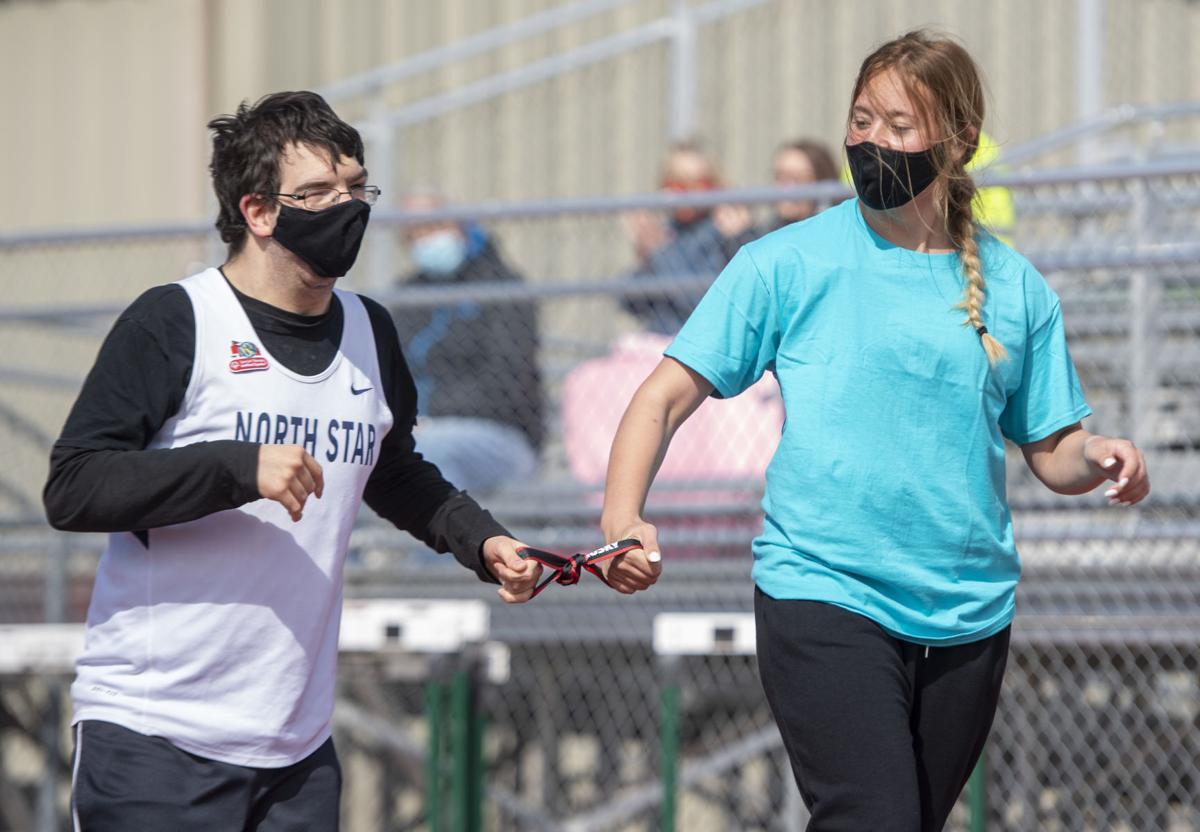 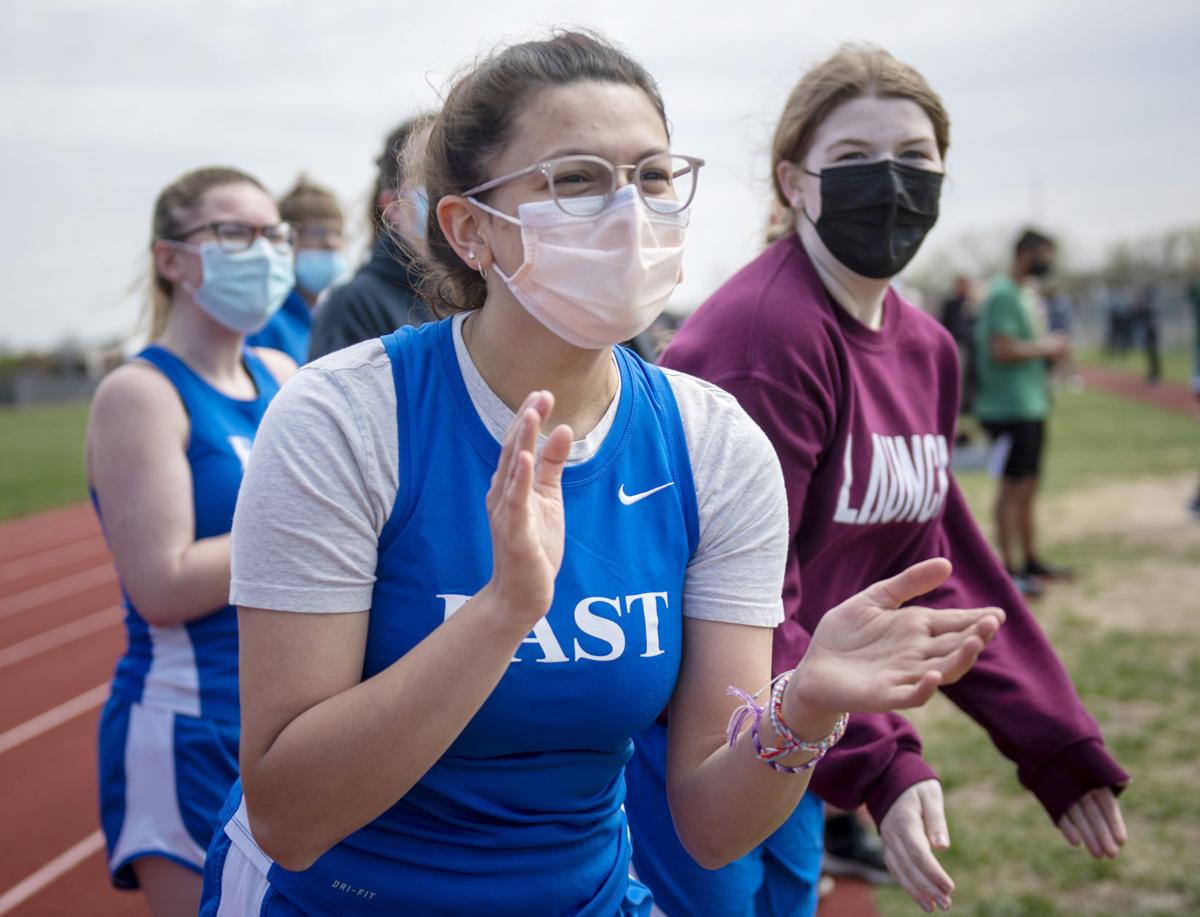 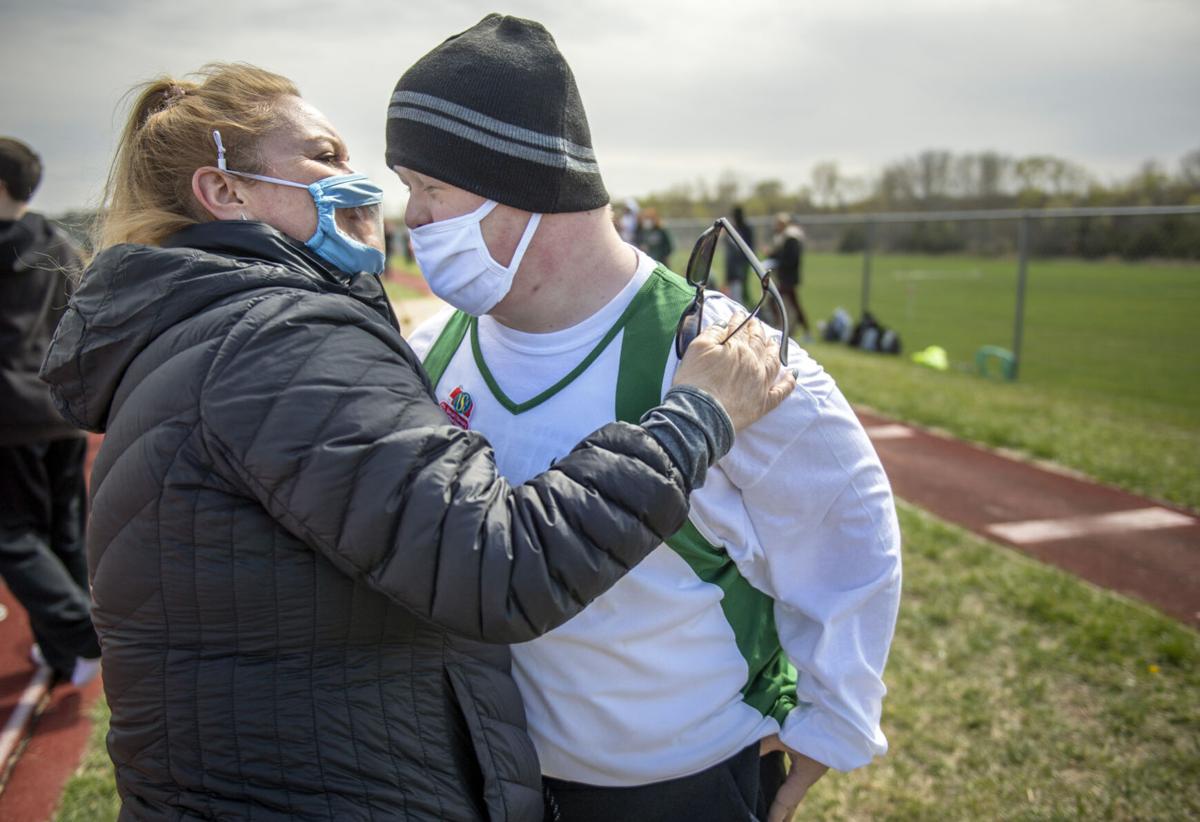 LINCOLN — At a track meet this week, the focus of the day was collaboration over competition.

Each team is made up of “athletes,” participants with intellectual disabilities, and “partners,” other students who compete with them. The teams competed in the three events that will be part of the state track meet this spring: the 100-meter dash, 400 relay and long jump.

Athletes and partners worked together during each event. In the 100 and long jump, athlete and partner times and distances were added together. In the relay, each four-person team included two athletes and two partners.

Brandi Benson, the unified sports coach at Lincoln Southwest, said the goal of unified sports is making sure everyone is able to participate and have fun.

Benson said the partners and athletes work together to encourage each other and make the team a welcoming environment.

“It’s so much fun to get to watch students interact with other students and have the opportunity to be in an environment that is 100% inclusive for everybody,” she said.

During each event, cheers came from participants and fans regardless of what team they were on or were rooting for.

“It’s super positive and so fun, and everyone’s cheering each other on,” Lincoln Southwest senior Kyra Boesiger said. “It’s just really exciting to be here.”

Boesiger said she has participated in unified bowling for four years and was excited to get to participate as a partner in unified track this year.

Roger Mundt, whose son Riley is a unified sports athlete at Lincoln Southwest, said he was pleased to see another opportunity for special-needs students to participate in sports alongside their classmates.

“This is all you can really hope for for your kids with special needs is to get them as normalized, as involved in everyday activities, as all the other students have access to,” he said. “It’s just a great feeling.”

Jill Swank, whose daughter is a unified sports partner at Lincoln East, understands why she might consider the unified sports program as the best part of her school day.

“Everybody’s so supportive of each other, and you can just feel the positive energy when you come to a space like this,” she said. “It’s just great to have them all together.”

Two weeks ago, with a different judge presiding and a Nebraska Supreme Court decision in their favor, Kelly Hoagland and Maria Salas Valdez adopted the child they had been raising since birth.

A look at recent progress on six segments of the state's expressway system in eastern Nebraska.

Miss Omaha Morgan Holen was selected to represent the state as the 2021 Miss Nebraska on Saturday night at the North Platte High School Performing Arts Center.

An Ohio-based group will pay a record-breaking fee of $23,130 for missing a campaign finance report deadline, but the fee could have been 10 times larger.

River otter trapping and mountain lion hunting seasons both were approved Friday at the Nebraska Game and Parks Commission meeting in Chadron.

23-year-old Carly Schaaf was reported missing May 19. Her death is considered suspicious, according to the Lincoln Police Department.

Ready to break free of the pandemic and travel again this summer? Watch video and read about 10 Midwest adventures from the Indiana Dunes to Iowa's Field of Dreams.

Lincoln Southwest’s Carson Truax, left, takes the baton from teammate Cora Scott during Wednesday’s season-opening unified track and field meet. “Everybody gets to just be, and everybody gets to have fun,” coach Brandi Benson said. 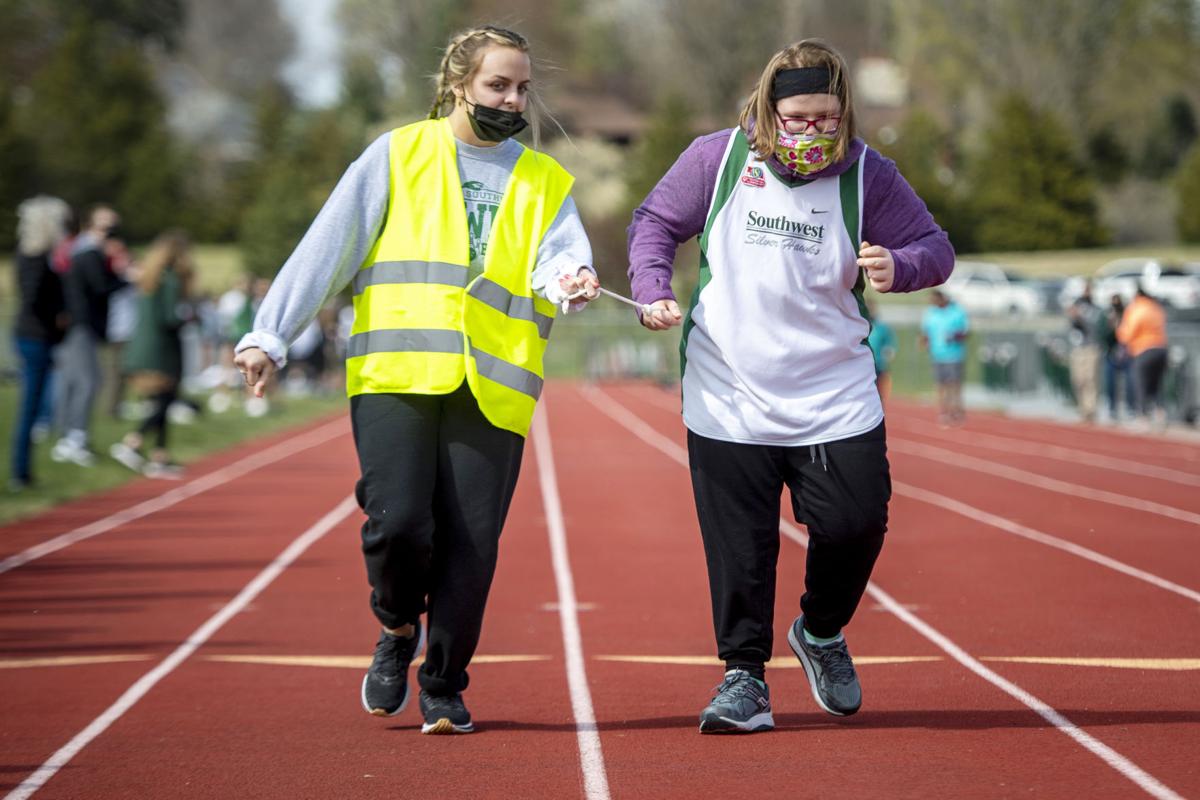 Kyra Boesiger runs alongside Lincoln Southwest's Brandy Muffley during Wednesday's unified track and field meet. “It's super positive and so fun, and everyone’s cheering each other on,” Boesiger said. 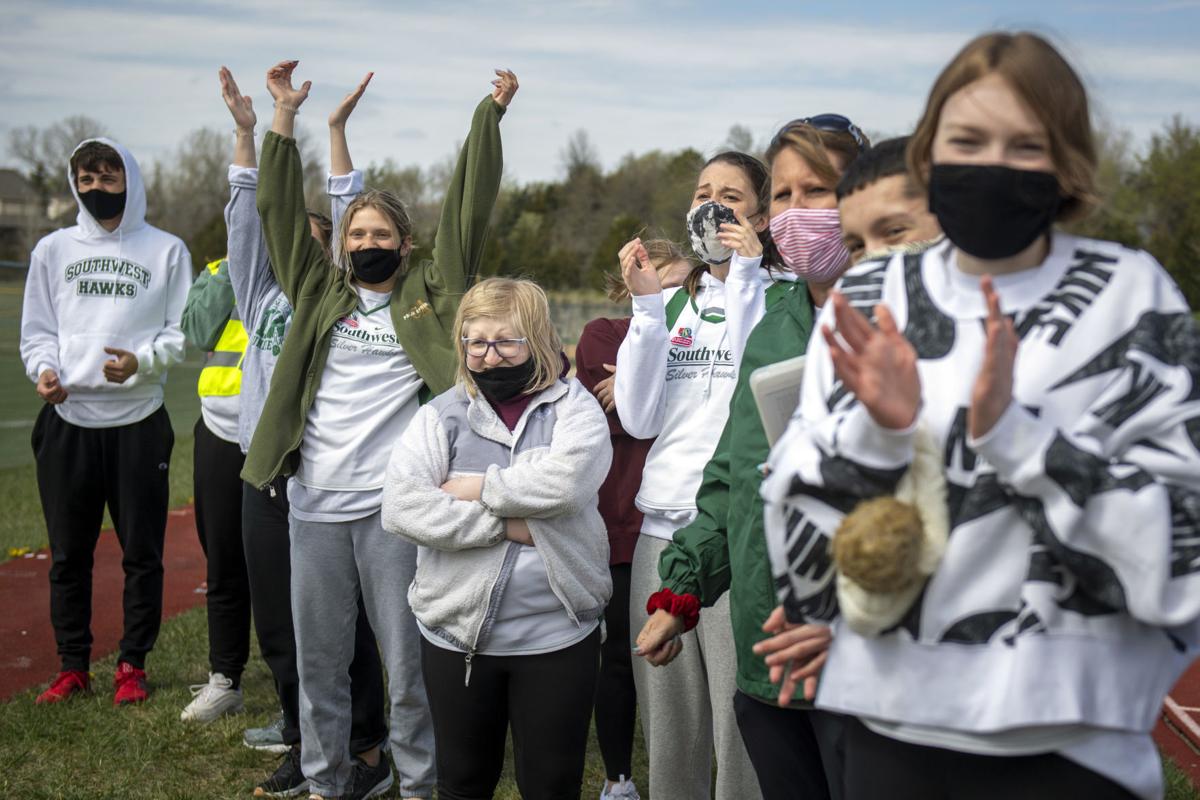 Lincoln Southwest coaches and teammates cheer for those competing in Wednesday's unified meet.