LINCOLN — Is it a political gaffe to describe the condition of Nebraska roads and broadband coverage as “not that bad?”

That question sparked debate in some political circles Monday after Republican gubernatorial candidate Jim Pillen offered that comment during a debate on Sunday. He was responding to a question on what Nebraska should do with the $2.5 billion it expects to receive from the infrastructure bill recently signed into law by President Joe Biden.

During the Nebraska Farm Bureau’s political forum, Pillen and five other GOP candidates for governor were asked how they would use the money coming to Nebraska to help farmers, ranchers and rural communities.

Pillen, who is a member of the University of Nebraska Board of Regents, responded that while there were “great opportunities” for spending on roads and broadband internet service, federal spending was “out of whack.” He described the infrastructure bill in three words: “big, government, socialism.”

“Could we use some money for roads and broadband? Maybe, but not today; they’re not that bad,” Pillen said. “We need to wait until the conservatives get back in charge, and then we give money and use it correctly.”

Some, including Pillen’s chief opponent, Charles Herbster, seized on the comment, saying it was a mistake to describe Nebraska’s highway system and broadband coverage as “not that bad.” The comment was compared to a political gaffe in 1988, when then-Sen. David Karnes said Nebraska needed “fewer farmers.” The remark led to Karnes’ defeat and a victory by Democrat Bob Kerrey.

But Pillen campaign officials said that the “not that bad” comment was taken out of context and that he was really making a point about excessive federal spending.

Pillen said he has supported additional spending on Nebraska roads by issuing bonds and backs the expansion of broadband.

During Sunday’s debate, Herbster didn’t say how he would use the infrastructure money but said that “America is broke” and that the level of spending in Washington cannot continue.

On Monday, Herbster said on Twitter that “now more than ever,” it is critical for Nebraska to improve its roads and broadband services. He later said in a statement that “like it or not,” the feds were sending infrastructure money to Nebraska and that “critical infrastructure investments” were needed.

When asked about the Pillen comment, University of Nebraska-Lincoln political science professor John Hibbing said it didn’t sound like the wisest response, given the support among Nebraskans for improvements in highways and internet service, “especially if the feds are paying for it.”

But Hibbing said he didn’t consider the comment a campaign killer. He said it was probably an effort to play to former President Donald Trump and his supporters, who have described Republicans who voted for the infrastructure bill as “traitors.”

Two of the Republicans at the debate, State Sen. Brett Lindstrom and Breland Ridenour, both of Omaha, said Nebraska’s roads and broadband services need improvement. Another candidate, former State Sen. Theresa Thibodeau of Omaha, said that she wanted improvements that helped farmers but that tax relief was her highest priority. Michael Connely of York said the U.S. government cannot continue to print money.

Nebraska’s highways and bridges generally get good marks in national rankings. One website, Quotewizard.com, said only four other states (including Iowa) have roads and bridges in better shape. But 2021 data from from the Federal Highway Administration placed Nebraska 18th-highest in the percentage of structurally deficient bridges (8.5%), which was an improvement over 2016.

The sponsor of Sunday’s debate, the Nebraska Farm Bureau, supported the passage of the infrastructure bill. Two members of Nebraska’s all-GOP congressional delegation, Sen. Deb Fischer and Rep. Don Bacon, voted for the measure. They have both drawn condemnation from some Republicans for the decision.

Meanwhile, Thibodeau tweeted on Tuesday that Pillen's "not that bad" statement showed a "disconnect with the Nebraskans he wants to serve."

Former Herbster staffer Tyler Henningsen said the video was a "set-up" and "dirty trick" by the Herbster campaign to show Taylor Gage and the Ricketts administration oppose Herbster's candidacy.

It remains unclear how federal infrastructure money will factor into the state's plans to spend nearly $15 million maintaining and improving Nebraska’s highway system over the next 20 years.

Candidates for Nebraska governor collectively raised over $12 million in 2021, but the vast majority of that total went to the campaigns of two Republicans: Jim Pillen and Charles W. Herbster.

Trans women with violent past barred from Scottish female prison

Trans women with violent past barred from Scottish female prison 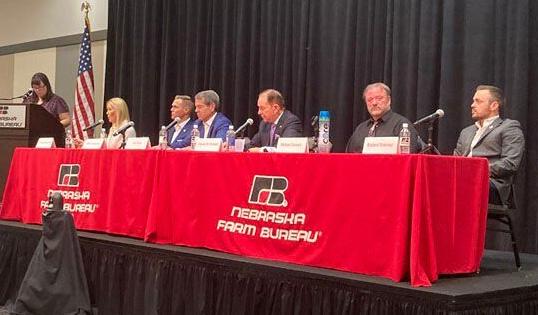